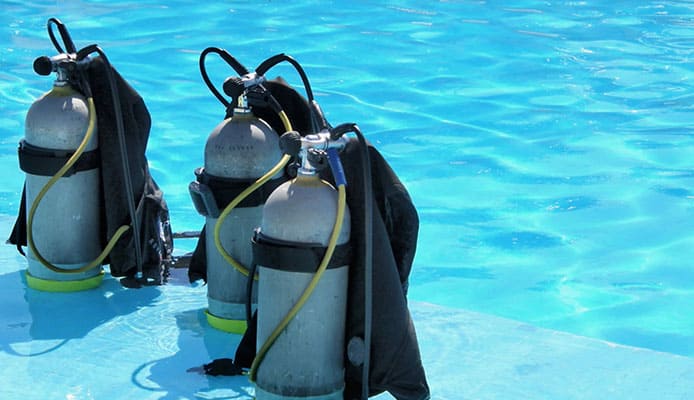 Trimix diving refers to the use of three gases that can help scuba divers breathe. The breathing gas that is utilized in this form of technical diving is a combination of oxygen, nitrogen, and helium. It is common in extremely deep dives, which will prevent problems with compressed air.

As you work on your way towards being a technical diver, Trimix is one of the concepts that you will need to master. It is not enough that you know the scuba diving breathing techniques for beginners. It is a different world once you go deeper. Trimix is sure to save the day and your life for that matter!

So, let’s start! Let’s discuss more trimix scuba diving, and once you are done reading, you can start exploring some of the best dive sites in the world, including those that will require technical diving!

What is Trimix Diving?

I know, we have covered this already in the introductory statement of this post. However, to make you understand it better, let us discuss it further.

Trimix is a combination of two words – tri, which refers to the three gases that are present, and mix, which connotes that it is a blend of gases. Technically, trimix can refer to any blend of three gases. However, in the world of diving, it is specific to only three gases – oxygen, helium, and nitrogen.

Also, when divers talk about trimix scuba diving, it is not only specific to the three gases that have been earlier mentioned, but there is also a predetermined mix of how much of each gas is present. Usually, there is 20% oxygen, 30% helium, and 50% nitrogen.

The blend of the breathing gas that is used for trimix diving will vary from one situation to another. Often, this will depend on the depth. For example, if a person is diving at a depth of 240 feet, the trimix can be expressed at 17/50. As you will notice, there are only two numbers, so you have to do the math to make it total to 100. It has 17% oxygen, 50% helium, and 33% nitrogen. At all times, the first number stands for the amount of oxygen used, the second is the helium, and the balance will dictate how much nitrogen is present.

So, as you can see, what makes this diving technique unique is the use of helium. In most cases, a scuba tank is filled only with nitrogen and oxygen.

It is believed that it was in World War II when the concept of trimix diving first became popular. It was then practiced by the member of the U.S. and British military. For a long time, the technique remains confined only in the military.

When it finally branched out of the military, trimix found its initial application in cave diving in the 1970s. Because caves are deep, it became necessary to add helium in the mix of their breathing gases.

Nowadays, trimix is more popular, specifically amongst technical divers. If you want to explore some of the best shipwreck diving destinations in the world, especially those that will require you to go at a depth of more than 150 feet, trimix scuba will come in handy.

Why You Need Trimix 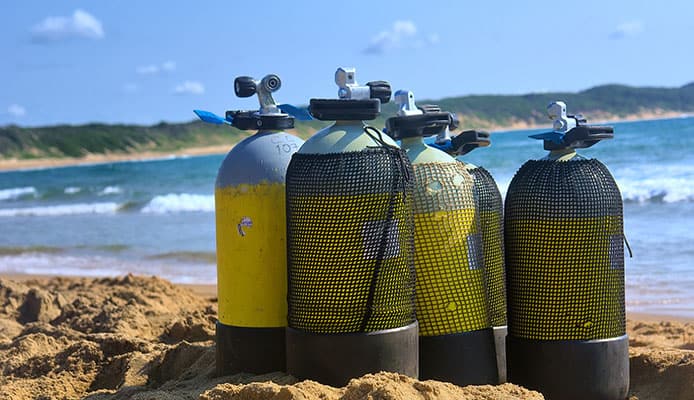 Now, let us go a bit technical, which will make it easier for you to understand the ins and outs of trimix diving.

First, let us discuss the concept of the Boyles law in scuba diving. Simply put, as you go deeper into the water during the descent, the pressure around you will change. It gets higher the deeper you go. With this, the volume of the air in the scuba tank will get smaller and will compress. When not managed properly, this can result in several unfavorable situations.

Among others, one of the possibilities is that you will suffer from nitrogen narcosis. This will cause an alteration in your mental state while you are underwater. When we are on land, the air that we breathe is mainly nitrogen. With this, the same thing should be true as well when we are diving. However, the deeper we go, the more the nitrogen levels are affected, and this can be a risk.

Meanwhile, it is not only the nitrogen that can be problematic. It is also not uncommon for divers to suffer from what is known as oxygen toxicity. This can lead to convulsions, drowning, and at its worst, death.

So, to be able to avoid the situations that have been mentioned above, trimix enters the picture. Because the high level of oxygen and nitrogen can put the diver at risk when exploring deep waters, the addition of helium into the mix can prove to be beneficial in more ways than one.

When helium is added, the nitrogen content in the breathing gas will be lower. This will also be the case with the oxygen, which will prevent oxygen toxicity from happening. Nonetheless, reducing the content of the two gases will not do any good. It should be replaced with a third gas to make sure that there will be no breathing problems. And, this third gas is helium!

Now that we have established why trimix diving is important for technical divers, the next thing that we will talk about would be the reasons why the third gas is helium. Out of all the gases that can be added for breathing better, what is so special about helium?

If you ask anyone who had a dive using helium as one of the main components of their scuba tanks, it is no longer surprising that many of them will say that they enjoyed the experience. They feel healthier and better!

Compared to nitrogen, it is also said that the narcotic properties of helium tend to be lesser, making it important to stay safe when underwater, especially when you go deep.

To add, it is also believed that helium is thinner and more compressible when compared to nitrogen. This will be instrumental in making sure that the scuba regulators will be working efficiently even when you are deep.

In fact, when the breathing gas is mixed with helium, such as in the case of trimix scuba, you can go as deep as 450 feet and stay remarkably safe! Of course, it is not enough that you have the gas alone. To do this, you also have to be properly trained.

Helium Has Problems Too

Now, with the things that have been mentioned above, you might think that helium is already the best gas. Nonetheless, it is also important to note the fact that it has some drawbacks and limitations.

While it is true that helium will be able to counter the unfavorable effect of nitrogen and oxygen in deep diving, it does not come without any problem. Since it is a faster and lighter gas, it can lead to decompression. To be able to combat this, you will need to ascend slowly. You might also be required to have deeper compression stops.

More so, diving with the use of helium is technical. You will need to have special training. Because of the depth that you will have to go to, you need to master not only the techniques, but you also have to make sure that you have the best dive safety gear to be prepared for anything unfortunate that can confront you.

This gas can also result in High-Pressure Nervous Syndrome. This is a neurological and physiological disorder that is experienced when diving because of toxicity to helium.

There are also insulation issues with helium. Because of its high thermal conductivity, there is a possibility that you will cool down quickly when you are breathing trimix gas. This means that your dive will end up being colder, which can limit your movements or make you feel uncomfortable. That said, aside from wearing a drysuit, it will also help to learn how to stay warm while scuba diving.

Of course, it is impossible to list down the problems with helium in the absence of mentioning cost. It is a scarce gas, and hence, logic dictates that it is going to be expensive. It is a simple law of supply and demand. It has tight regulation, so the cost of having a tank filled with helium can be steep.

It is not only helium that is expensive. The trimix diving course itself also comes with a steep price. Roughly estimating, it could be around $1,000 to $1,200 depending on where you choose to complete it. The cost is not yet inclusive of the scuba diving gear! This is costlier when compared to other diving courses. Nonetheless, because of its technical nature, the cost can be justified.

In sum, trimix scuba diving refers to the use of a combination of three breathing gasses – nitrogen, oxygen, and helium – when diving. It is for the technical divers who plan to dive at a depth of more than 150 feet. For some divers, even at a depth of only 114 feet, they already suggest using trimix for breathing if you want to maintain a clear head.

The deeper you go under the water, the more pressure changes are experienced. This can put your health and safety at risk. Trimix diving will help to make sure that you remain safe and sound, just like the practice of deep breathing and learning the art of buoyancy control.

So, what are you waiting for? Now that you know the concept, it is time to put the theory into practice. Take a technical course today and be ready to explore deep dive sites. It is expensive, but it will be worth it!