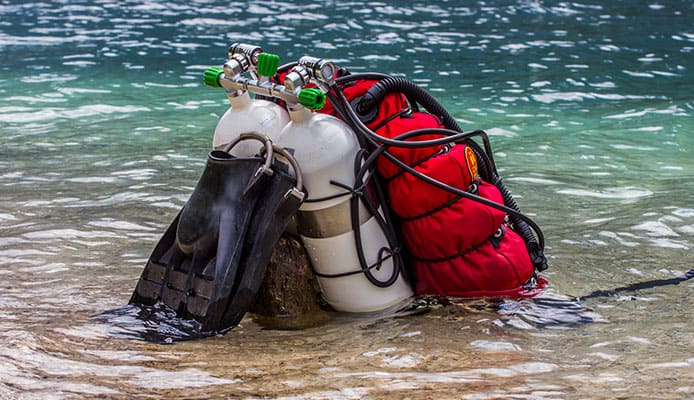 If most people were to be asked what is in a scuba tank, the majority would answer-oxygen. However, this is a misconception. Granted, there is oxygen in the scuba tanks but this is only a small percentage.

The majority of the gas in the scuba tank is nitrogen at 78% while the actual oxygen is at 21%. There are also small amounts of other gases such as carbon, argon, helium, and neon just to mention a few.

Oxygen, when under too much pressure can cause dexterous effects on the pulmonary system, the central nervous system as well as the ocular function. Diving, therefore, needs to be approached with care.

Nitrogen is part of what is in a scuba tank and is not safe either when subjected to pressure. It easily dissolves in the bloodstream and body tissues. When the diver rises to the surface too fast, the pressure on the body reduces causing the nitrogen to expand. Bubbles result that can cause extreme pain in the body tissues and the joints. This phenomenon is known as decompression sickness or bends.

During scuba diving, a well-fitting scuba mask will ensure that your face feels comfortable and allows you to make the most of your time underwater.

When a diver is planning on staying under for longer or going deeper far more than the recreational diver, there are other different mixtures of gases that are created just for this. The most popular is called nitrox.

Is scuba diving with nitrox dangerous? Well, what you should know is that nitrox has a higher percentage of oxygen at 32 or 36%. As the scuba diver goes under, his body will absorb more oxygen which lessens the chances of catching decompression sickness.

This is a chart that tells divers just how much time they can spend and at what depths. And when it’s time to ascend how long they should take to reach the top depending on the depth.

A dive watch allows the diver to quickly glimpse the time they are underwater and is a great addition to compare the information from the dive computer.

However, using nitrox doesn’t mean that you completely disregard dive tables. Not following the universal guidelines of the dive tables can bring its fair share of complications one of which is oxygen toxicity.

One of the challenges that divers face is getting the correct mixture of nitrox at the dive shop. Most dive shops are not willing to stock nitrox which could limit its use in the area. And when you do find nitrox, it should be clearly stated on the scuba diving tanks the amount of oxygen in the mixture. The tank should also state the total maximum depth that is safe for the diver to use the tank.

Always have a dive compass to help you navigate when you are trying to find your way back. 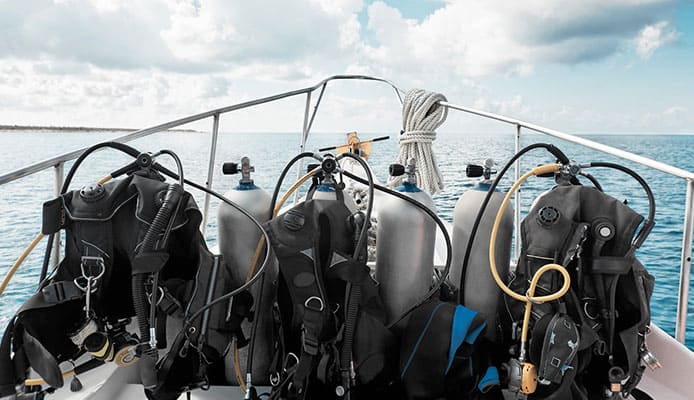 Before making any dive it’s important to do proper research regarding the type of mixture you are going to use. Diving can be dangerous and sometimes the situation can be a matter of life and death.

This is another special gas mixture that is intended to allow technical divers to go down deeper and stay under for longer. It comprises oxygen, nitrogen, and helium and is only available at a few dive shops.

To create trimix, the dive shop should have certified gas blenders that are capable of mixing the gas in the correct proportions.

To understand what is trimix diving and why divers use trimix, you should know that the diving limit is determined by the concentration of oxygen in the scuba diving tanks. Normal air limits a diver at 218 feet and anything beyond that can lead to oxygen toxicity. To dive deeper, less oxygen and less nitrogen are required.

When diving deep, visibility gets low and dive lights will help you see your way in such great depths.

Technical divers will also wear a wetsuit and dive gloves to maintain their core temperature.

How about pure oxygen?

If you are a recreational diver and are wondering whether you can use pure oxygen as part of what is in a scuba tank then the answers are not! Other than being highly flammable, oxygen is also highly toxic to breathe in its pure form. In fact, it could kill you after just a few meters.

Pure oxygen is not for the recreational diver and can only be used by technical divers after very careful planning.

The reason for oxygen toxicity is because the amount of oxygen is too large for the human body to handle. It particularly affects the central nervous system causing the body to convulse. While it has been shown that rising above 20 feet will cause the convulsions to cease, the diver will spit out the regulator and drown before he can make the conscious decision to rise above 20 feet.

However pure oxygen does come with its share of advantages and is not all evil as you might presume. In the case of diving injuries, pure oxygen is normally used for treatment.

While recreational divers will do just fine diving with normal air, technical divers will go down many more feet. Coupled with proper functioning scuba gear packages, they require a special gas combination to prevent oxygen toxicity and nitrogen narcosis.