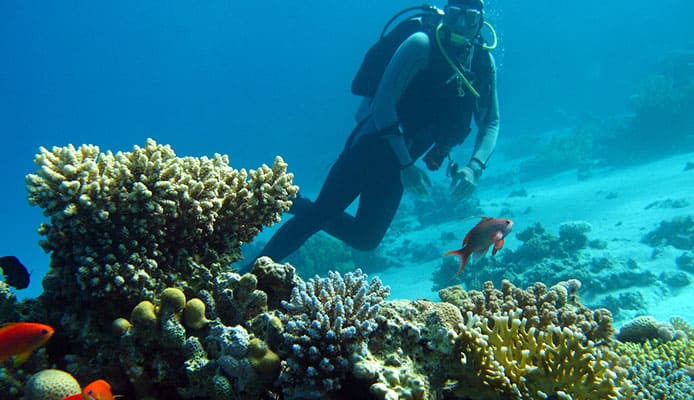 Like other sports, scuba diving comes with its own set of terminologies and acronym soups that are unique to the sport like ATA (Atmospheres Absolute), CESA (Controlled Emergency Swimming Ascent), CCR (Closed Circuit Rebreather), and others.  Although all of these are important and must be learned by all divers, some terms seem to have more bearing than others, one of which is MOD or the maximum operating depth, which refers to the depth limit at which the breathing gas inside the scuba tank remains safe. Not only do you need to know what scuba MOD is and how it will impact your diving, but you’ll also need to learn how to calculate and compute your MOD to avoid putting yourself in serious (even fatal) situations while underwater. Don’t worry though because this math isn’t really rocket science as you’ll see later. But before we start punching numbers in the calculator, let’s first understand why MOD is one of the most important numbers scuba divers should know.

Despite oxygen being an all-important gas for us human beings, breathing in extremely high concentrations of it can be rather fatal for divers. This is because doing so will result in oxygen toxicity. There are two types of oxygen toxicity: Pulmonary oxygen toxicity and central nervous system (CNS) toxicity.

Pulmonary oxygen toxicity is caused by exposure to elevated partial pressures of oxygen for long periods of time resulting in a burning sensation in the trachea, coughing, shortness of breath, and eventually lung failure. On the other hand, CNS toxicity is caused by exposure to oxygen partial pressures greater than 1.6 ATA and can result in convulsions, pulmonary barotrauma, or even death. In any case, you’ll want to make sure that you don’t expose yourself to any of these types of oxygen toxicity.

This is why calculating your maximum operating depth is important. By making sure that you know and stay within that depth helps to ensure that you don’t go to depths where the oxygen in your tank becomes toxic and fatal. One of the best ways to do so is with a dive computer which can be programmed to beep or otherwise notify you if you exceed your MOD limits. 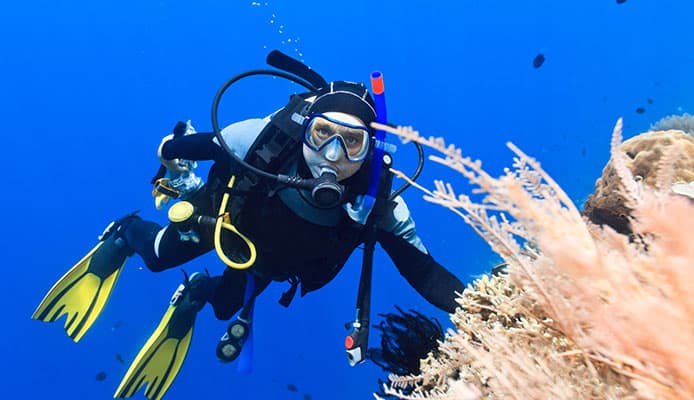 Calculating your maximum operating depth requires a series of steps, and may even require the use of a calculator. So get your pen and paper ready and let’s start crunching some numbers.

1. Determine Oxygen Percentage in Your Tank

If you are diving on air, your scuba tank will contain around 21% oxygen, with the remaining being a mix of other gases. On the other hand, if you are diving with an enriched air nitrox mix or trimix, then the percentage of oxygen in your tank will be higher. So to determine the percentage of oxygen in your scuba tank, you’re going to need to use an oxygen analyzer.

It is generally accepted among scuba diving circles that the limit for partial pressure of oxygen for a dive is 1.4 ATA (atmospheres absolute). However, this number can be altered, either raised or brought down as influenced by the type of diving to be conducted and the purpose of the breathing gas (e.g. shorter deep-diving vs. staying shallow but for longer periods). For instance, many technical divers opt for partial pressures that are higher than the recommended 1.4 ATA to account for decompression stops.

Once you have all of the above details, it’s time to calculate your maximum operating depth. You can do this by dividing the maximum partial pressure of oxygen by the percentage of oxygen in the tank.

So for instance, let’s say that you’ll be diving at the recommended 1.4 ATA with a nitrox mix of 32% oxygen. Dividing those numbers will yield 4.375 or 4.38 when rounded up.

After that, get the resulting number and subtract 1 from it, thus leaving you with 3.38.

Finally, multiply this number with 33 FSW (feet of seawater) or one atmosphere (the same pressure as atmospheric pressure at sea level). Doing so will yield 111.54 or 111 feet of maximum operating depth (it’s often better to round it off to the lowest decimal point to be more conservative).

The same formula is used when computing for the MOD of other common breathing gasses. Simply substitute the percentage of oxygen in the tank with the appropriate numbers (e.g. 21% for air, 36% for Nitrox 36, etc.).

Knowing your scuba MOD is crucial to ensure that you have a safe diving adventure. As can be seen above, calculating your maximum operating depth isn’t really that difficult. Sure there are MOD cheat sheets available online that you can use, but knowing how to do it and doing the calculations yourself makes you much more confident about the resulting number. And if you’re having doubts about your calculations, check in with your diving buddy or diving instructor for confirmation. After all, it’s better to be safe than to be sorry.