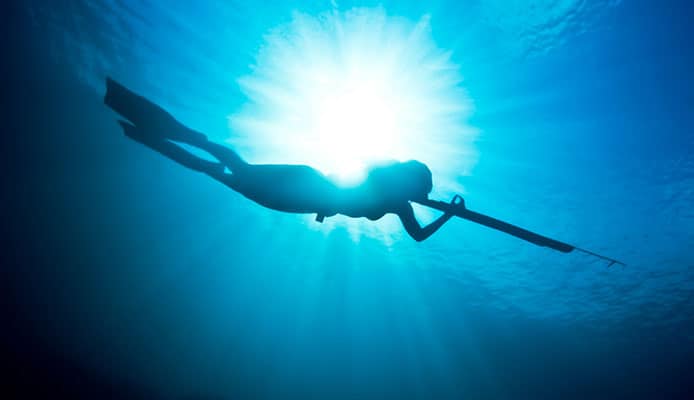 Every diver or angler who has tried spearfishing knows just how addictive the sport can be. The action, adrenaline rush, and enjoyment you get are just indescribable, not forgetting the striking beauty of the marine environment around you.

Spearfishing enthusiasts travel across the world in search of the best spearfishing spots. Some bring their own boats while others (especially those planning a multi-destination holiday) prefer using spearfishing charters.

But how do they know what spearfishing trips offer bigger and better fish? Well, that is exactly the purpose of this post. Here are the 10 best spearfishing spots in the world that will make this uniquely exciting activity memorable and worth your while.

If you are looking for the best gift for scuba divers or freedivers to treat your diving buddy, take them to Bali. They will love shooting fish.

Bali is one of the most popular spearfishing destinations on the planet. With beautiful clear waters that host bountiful schools of fish and marine life, you will surely have a time of your life.

Bring your diving camera and capture those moments of you and your buddy gliding with some monster fish. It won’t hurt letting your eyes feast on other marine life like giant moray eels, hawksbill turtles, giant manta rays, and hammerhead sharks too.

The Florida Keys is a great destination for both skilled and beginner scuba divers, snorkelers, and freedivers. It provides shallow spots as well as deeper areas to explore and test your spearfishing skills.

The grouper season begins in May, drawing thousands of spearfishing junkies from all corners of the universe. This is also the best time to catch dolphin fish a.k.a mahi-mahi, as it is their peak season. The seas are full of life and there is plenty to see in the underwater gardens.

However, Florida has rules that govern what you can catch and what you cannot. So, make sure to familiarize yourself with these before you go.

If you have ever heard of the great Hawaiian pole spears or sling spears, then you probably know that Hawaiians are avid spears. This is one place with strong cultural and traditional ties to spearfishing so you will learn a lot about the way of life of the Hawaiians too.

There is an abundance of mahi-mahi, ono, barracuda, billfish, and Mahi in the Hawaiian waters. This is probably the reason why the restaurants here serve such delicious seafood.

Although the western islands of Hawaii do not allow scuba spearfishing, there are still plenty of amazing spots to explore. After all, Hawaii has over eight different islands, so you have an almost limitless list of great places to go.

Did you know that 15% of the fish caught in the world comes from Japan? Yes, Japan is a pretty small island but guys here are experts in fish and fishing in general.

If you crave some sushi or want to shoot some bonito, snapper, Japanese yellowtail, horse mackerel, and amberjack, head to Japan and you will have the most enjoyable moments with these creatures. There are plenty of spearfishing charters servicing Zamami and Okinawa, the two prime spearfishing locations in Japan.

Spearfishing has a deep history among the Japanese community. In fact, a group of women known as Ama has been treating it as a tradition since the 1700s and has been freediving for sea urchins, lobsters, and abalone for all these years. This is one of the best areas to learn the history of freediving. 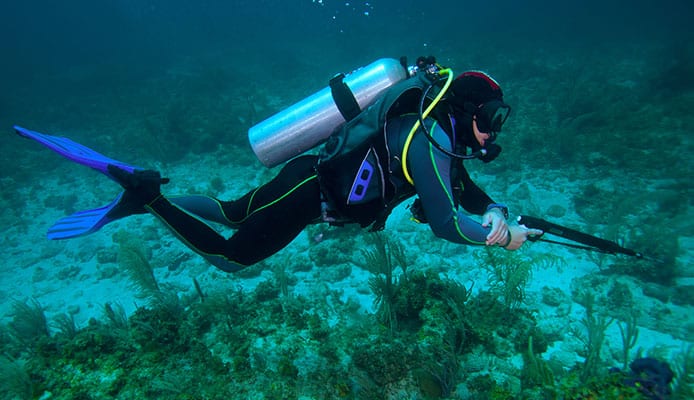 But it’s the wahoo that really draws appears to Cape Verde. These gorgeous fish are available all year round, which means, you can book your trip at whatever time is convenient for you.

There is more – wahoos can swim up to 60 meters per hour, which ranks them among the fastest predators in the ocean. So if you are looking to challenge your spearfishing skills, Cape Verde is the place to be.

If your dream is to catch Pacific halibut, then head to California. These monster flatfish are one of the reasons why this part of the US has been a great destination for spearfishing trips.

San Diego, one of the best diving spots in California, is known to accommodate bountiful of giant Pacific halibut. In fact, in 2014, a free diver spearfished a halibut weighing over 480 pounds.

Well, that must have cost him lots of effort, which means you too need to come prepared. Halibut are aggressive fish so catching them will be no doddle. On a trip like this, therefore, you may want to bring your scuba diving or freediving buddy to ensure that the adventure pays off.

In addition to Pacific halibut, you will have an encounter with white and striped bass, sheepshead, red snapper, Bonita, barracuda, and yellowtail. You don’t want to miss such an experience, do you?

The Portuguese have always found the Azores a spearfishing hotspot. There are sufficient species of fish to catch including barracudas, mahi-mahi, marlin, and giant amberjacks. If you are looking to hunt tuna too, you will find it here, and plenty of it. Large albacore tuna, yellowfin, and blue eye make occasional visits to this paradise – even the Bluefin tuna, which is a rare species to find.

The Azores is an isolated island and the local guides have been spearfishing for tuna their whole life. As such, they have mastered the game as well as all the nooks and crannies that hide the best and hard-to-find marine life.

Of course, there are other spots such as the Condor Bank, Azores Bank, and Princess Alice Bank that you could explore. These are just about 30 miles offshore and they too will offer you an unforgettable adventure. Baixa Do Sul will also serve some good-sized fish for those looking for shorter trips but still would like to catch large fish.

Located on the western side of Thailand’s coast, Krabi Province is a huge residence for queenfish, giant trevally, milkfish, golden snappers, grouper, mangrove jacks, and plentiful of other exotic fish. With picturesque rocky limestone cliffs, mangrove forests and numerous islands, this spot has something for both beginner and skilled spearfishers.

You can enjoy relaxing spearfishing during the day and later camp out on the serene Thai island. Most divers and anglers, pack up their camping tents and sleeping equipment and spend the night under the beautiful stars. It would probably be the best idea if you are on a tight budget.

Though North Carolina doesn’t get the recognition it deserves when it comes to spearfishing, this state is a hideout for monster fish. Take a trip to its underwater world and you are likely to land 20-pound hogfish and 10-pound lobsters.

North Carolina got on the spotlight when spearfisher, Cameron Kirkconnel caught a 21-pound hogfish off the shores. You could be the next Cameron and all you got to do is book your next spearfishing trip to North Carolina.

Not only will you find hogfish and lobsters but you will also have an encounter with cobia, African pompano, and amberjack. There is also a shipwrecked freighter 15 miles away that would provide a fantastic anchor spot for those going scuba diving.

Only a few people think of Rhode Island when talking about spots for spearfishing in the world, but the truth is, this place is a favorite for many spearfishers. For starters, it has a deep history of spearfishing, and the locals’ culture is still thriving.

Block Island, the most famous destination for spears is located about 14 miles off Rhode Island’s coast. Divers from Rhode Island, South Carolina, and Maryland flock here to have their share of the striped sea bass, bluefish, black sea bass, fluke, triggerfish, and scup.

Moreover, the stunning sandy beaches are perfect for a wide range of games and activities including biking, indoor skydiving, and whale watching. You can set up a beach picnic too if you want.

It doesn’t matter where you are; snagging a catch is exhilarating and you will have an awesome experience pretty much wherever you go. Just make sure to research and prepare adequately to avoid common spearfishing dangers and risks like drowning and accidental spearing.