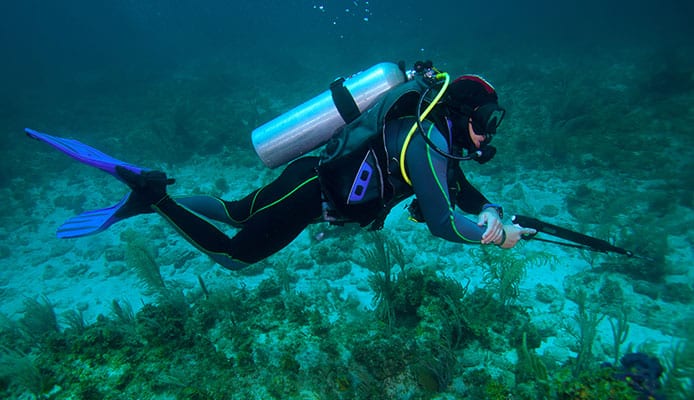 Scuba diving or freediving itself can be complicated from the safety aspect, and the sport becomes even more dangerous and complex if you add a speargun, pole spear, or a sling to the equation, needed for spearfishing. In this article, we’ll go through the five most common spearfishing dangers and risks, so you know what to expect, and we’ll also talk about safety and how to minimize the chance of something going wrong. 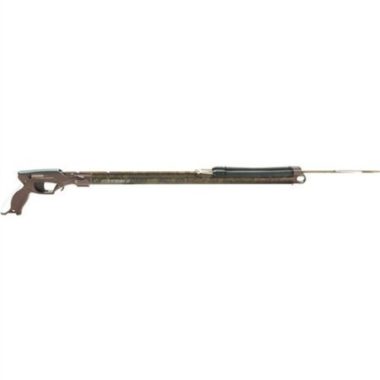 Entering And Exiting The Water

The very beginning and the very end of your spearfishing session are some of the most dangerous parts and should be taken as seriously as possible. When entering the water, pay attention to swell. If it is too big or it looks suspicious, postpone your session. When the time comes to exit the water, you may be tired and have to fight with the swell, which, combined with the spear, becomes quite a challenge to overcome. Also, you may get cramps.

You’ve probably heard stories about someone getting shot during hunting, whether by themselves or by some other hunter. The same thing can happen in spearfishing. That’s why you should treat your speargun with precaution, don’t point it to someone else, and don’t hold your finger on a trigger unless you’re ready to shoot. Follow these rules even if there is the speargun is empty, to practice good awareness and spearfishing discipline.

Saying that you could drown during a diving session seems pointless, but in combination with spearfishing, it becomes one of the main dangers. There are a few different reasons that could lead to it:

Try to be maximally aware of what is going on and don’t risk anything. Along the way, make sure you know your limits and also respect others. Don’t push it and it should be alright.

Currents are one of the biggest threats for any diver, and they are an even bigger problem during spearfishing. The reason is simple – the fishermen will dive to bring their prey with themselves back to the surface, along with all the other stuff they have carried in the first place. Fish tend to use current to their advantage if they feel like they are in danger.

That is why it is recommended to learn about currents, their behavior, and how to identify different types of currents, like a rip current, tidal current, etc. A good way to skip the current is by using a paddleboard, kayak, or boat to go over them and start your dive in more calm waters.

Same like currents, waves could also affect the movement, especially on the surface. If the waves are large enough, swimming on the surface can be quite difficult, and it could lead to injuries, loss of the track of your dive companions, and potential gear damage. Though, there are a few things you can do to minimize the effect of the waves:

The third big problem among spearfishing risks is lowered visibility under the water. This can come as a consequence of many different things, like after the storm, etc. In this case, skip checking out shipwrecks or underwater caves because you could end up getting stuck there. Also, for this purpose, it may be better to go with a pole spear instead of a speargun, as you’ll have more control. 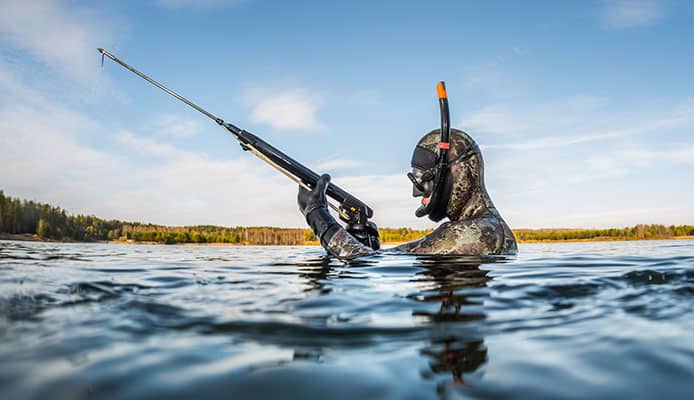 Remember, as you go spearfishing, many fish species will do their best to defend themselves, so the fifth among spearfishing dangers that could cause some serious problems during your dive is marine life. Some of them love to sting, like scorpionfish, some will fight for their prey, while everything has already been saying about diving encounters with the sharks.

You should also pay special attention to fire corals, as they could also cause abrasions and cuts that may go from annoying to serious. You’ll lower the possibility of this happening by wearing proper gear, like a wetsuit, but also by learning about possible dangerous species you could run into in the area you’ll be spearfishing in, and how to behave if it does happen.

After all of these, the main question is how to stay safe? And the answer is not as complicated as it may look at first.

Start by informing yourself about the area you’ll be spearfishing in. By gathering all the newest information, you’ll know what to expect once you enter the water. If you can, go with a friend, don’t go by yourself, and organize someone to wait and pick you up as you dive. Learn the local rules and regulations to avoid possible problems, and learn how to use the speargun. And treat them the same way you treat the firearms:

Spearfishing is one of the oldest ways of fishing that is gaining popularity in recent years, by the development of scuba gear. It will provide you with the chance to see and catch some pretty amazing fish you won’t be able to do in another way, but it does have its own share of dangers. With this article, avoiding them should not be much of an issue, so when the time comes to head into the water, you may focus on your main goal – to catch fish.