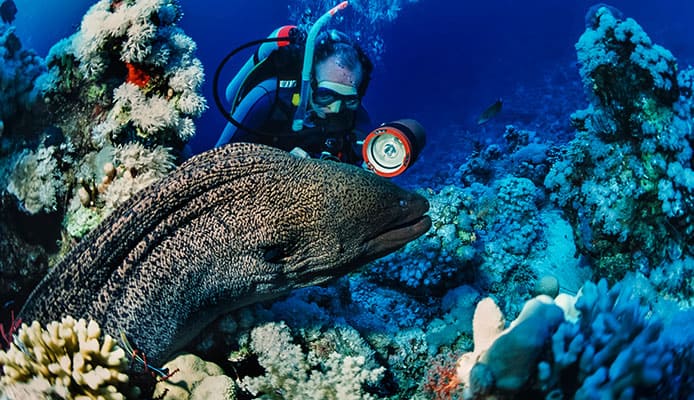 While diving, no matter if scuba or freediving, you’ll meet many sea creatures. Some of them look amazingly beautiful, while others tend to cause fear among the divers. And then there are moray eels. Some find them goofy, funny, or uniquely beautiful, others are afraid of them, but no one will call them ordinary.

Scuba diving has some dangers and risks, we’ll try to answer the question are the moray eels one of them? In this article, you’ll read about their behavior, learn about different moray eel species, and learn how to behave when you run into one of them so you don’t provoke the attack and stay safe. Basically, you’ll get all the needed information to know what you’re dealing with during your meet and greet with the moray eels.

Moray eels may look dangerous because of their gaping mouths and sharp teeth, but are they actually one of the most dangerous fish in the sea? Do moray eels attack divers? The answer is quite simple – no, they don’t. At least, they don’t do it intentionally. Moray eels have a great sense of smell, but their eyesight is really bad, so the accidents did occur, although rarely.

What Could Provoke The Attack?

We’ve already said that they rarely attack, but sometimes the incidents do happen and they could, seemingly spontaneously, attack a diver. But, if you dig just a bit under the surface, it is not so hard to understand why that happens.

The vast majority of these kinds of attacks happen in the area where morays are being hand-fed, so they tend to attack whether to try to chase the diver away from their food or because they have mistaken the diver for their food. Poor eyesight doesn’t help, so they can mistakenly bite someone because they think it’s a piece of their meal.

How To Avoid Being Bitten?

To avoid being bitten by a moray eel, simply follow three easy rules:

To sum this part of the article up – if you provoke them, they’ll bite. It is as simple as that.

What To Do If Bitten?

When the moray eel bite occurs, without a delay go to the nearest medical center. But before that you could take some basic care of the wound:

When you reach the hospital, they’ll tell you upon inspection do you need sutures, prescribe you any painkillers if you need them, antibiotics. In case of a severely injured finger or toe, they would possibly have to be removed surgically.

Tetanus vaccination is most often required, and it is recommended to go back for follow-up and check-ups, just to make sure there are not any signs of infection. If there are, the doctors will be able to react on time. 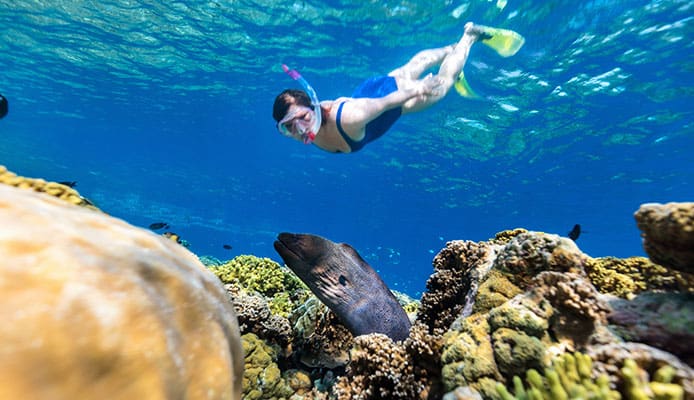 There are many different moray eel species among other cool eel species and they are easily spotted and recognized by their interesting color pattern. These are some of the most popular types of moray eels:

Moray Eel Is Not A Sea Snake

They do look and move through the water like a snake, but they are not reptiles or amphibians. Moray eel has something that looks like one long fin that goes from the back of the head, around the tail, and along the belly. Actually, there are three fins

Moray eel also has a second set of jaws, also known as pharyngeal jaws. And, unlike some other fishes that have two jaws, their second one is usable. It helps the moray eel by, when the pray has to be caught, moving forward, grabbing it, and then dragging it into the throat to be swallowed, basically removing any possibility of getting away from a moray eel’s jaw.

Moray eels have really smooth skin. This is because, instead of scales, their skin cells produce a mucous coating used as a protective layer. Also, touching it could disrupt it, so don’t do it or you could damage the skin protection moray eel has.

That coating has a few other purposes, like affecting their colors – the biggest example is the green moray eel that becomes brown without their slime. And it is used to help stabilize their shelter by gluing sand particles together.

Moray eels are tropical creatures, they love warm waters so wherever the sea is warm, and there is a possibility that it has moray eels. They are nocturnal creatures, which means they move during the night and most often are hidden in their hideout during the day, so the probable location where you could find moray eels are coral reefs.

They are saltwater fish, but there are also a few examples of moray eels that can live in the salt and fresh water mix, and the least number of moray eels are fresh water. They love to move along the bottom of the ocean, but most often they remain hidden, so if you end up seeing a moray eel swimming under you without looking for them, take a moment to enjoy it – it is a rarity.

How Long They Live?

After their hatching, the new-born moray eels are turned into some kind of larvae, shaped like a thin leaf, free-floating around the water for about 8 months. After that period, they swim to the bottom, where they continue their transformation until the moray eel stage. When grown, moray eels’ natural life cycle lasts from 6 to 36 years, depending on species.

And What About That Frightening Bite?

When you observe moray eel, especially if you’re not familiar with them, it may look like moray eel is one of the most vicious species because of their constant mouth opening and closing in a gaping fashion. The secret is not in their evil spirits, but in the need to keep the water flowing for respiration facilitating. It may seem aggressive, but it is actually their way of functioning.

For scuba divers, freedivers, and divers in general, meeting sea wildlife and learning their way of life is maybe the biggest perks diving could offer. One of the most attractive you could run into is moray eel. They do look fearsome and aggressive, but as long as you’re careful and responsible enough, you’ll end up heading to the surface filled with joy after you’ve spent some time with a creature like that, and even more importantly, with all of your toes and fingers firmly attached to your body. Respect the sea life, and it will pay you back.