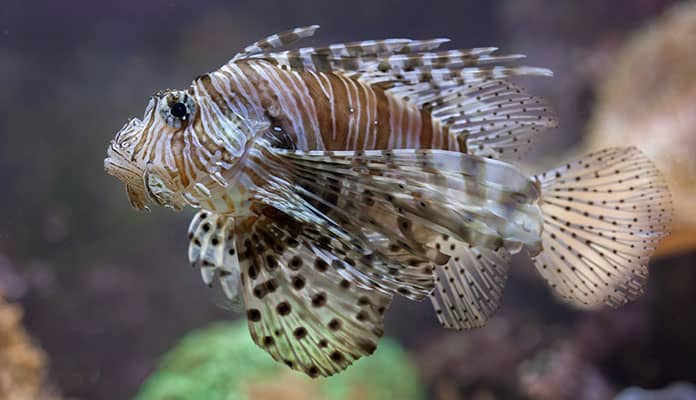 When snorkeling through the water you will likely come across many fish in the water along with you. For some, this can bread fear as the ocean is so largely unknown. It is uncommon for humans to get attacked in the water. In most cases, attacks happen because of human error leaving the fish feel threatened. With some knowledge and extra care, you can safely encounter all of these animals without issue. Be sure to bring along your camera, you won’t want to forget it!

For a long time now humans have been obsessed with fish. The trend for snorkeling and scuba diving has grown exponentially in recent years. More and more people have in-home aquariums and are turning to the sea as the main source of food and to support their families. While most fish are entirely harmless, there are a select few that can pose a serious threat to humans.

Just for fun, we are going to count down.

The Top 10 Most Dangerous Fish May Surprise You! 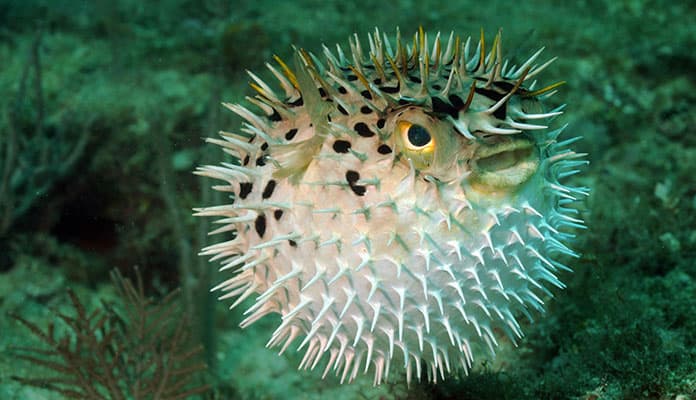 That is right, this cute little fish made famous by Finding Nemo is actually quite dangerous, that is if you try to eat them. Puffers, commonly called swellfish or blowfish, is an umbrella term for about 90 different species of fish under the Tetraodontidae family. When threatened or stressed these fish inflate themselves to a large firm, how they got their trademark puffer name. These fish frequent warm tropical ocean waters. They have in some instances been found in freshwater though this is unlikely.

Most puffers are quite small with the largest species growing to be about 35 inches long. They have prickled skin and fused teeth. These fish are most often not used as food as they contain a highly toxic tetrodotoxin in their internal organs. With that being said, these fish are still sometimes eaten in parts of Asia, specifically Japan. They can only be consumed with a specially trained chef is preparing and cleaning them. 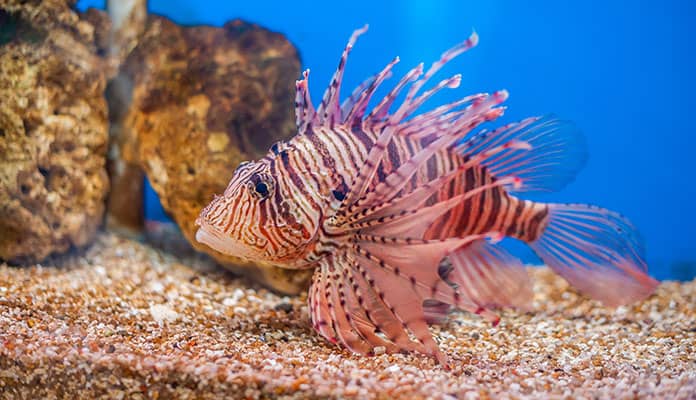 The Red Lionfish consists of several beautiful fish that frequent the Indo-Pacific ocean. These fish typically stretch around 12 inches long and consist of several different species. They have beautiful spines that are actually venomous. These spines are capable of producing incredibly painful wounds that can even, in rare cases, be fatal. When disturbed these fish spread their fins out like a fan in a warning. They only attack when further threatened.

Candiru, also known as Vandellia Cirrhosa, is likely a fish you have never heard of. This is for good reason. A fish you should hope to never come across these scaleless fish are found in the Amazon River. With a translucent color and eellike body, these fish grow a mere 1 inch in length. Don’t be fooled by their size, these fish can be deadly. You will likely not see them as they harbor in the gill cavities of larger fish feeding on their blood. The Candiru has been found to attack humans and the worst part is it is often unknown until after the fact. These fish swim up unexpected swimmers urethras. Once inside of you, the fish erects its short spines. This causes inflammation, hemorrhage, and can even cause untimely death. 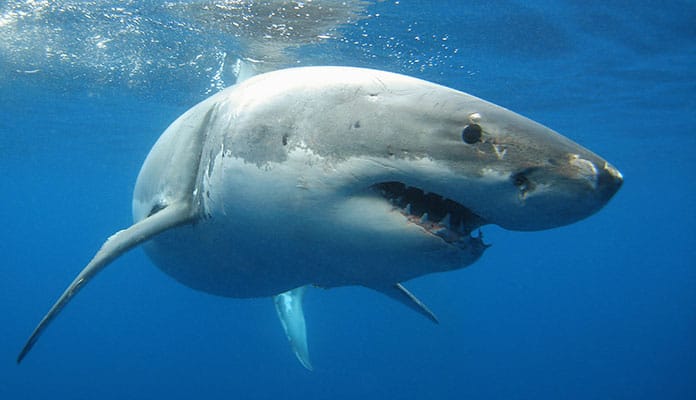 That is right, the Great White is only number 7 on our list. Most people mistake these large sharks to be the most deadly fish in the sea. The white shark, also known as the white pointer, is most famously feared for its role in the movie Jaws. More and more people are being intrigued by sharks. Swimming with sharks and even cage diving has become much more popular as more people seek out that once in a lifetime experience swimming alongside these majestic fish.

These sharks prefer warmer waters between 54 and 75 degrees. These sharks are so feared as their attacks seem to be largely unprovoked. Sharks do not typically attack for a kill and instead are curious. Most authorities attest great white attacks to be due to them mistaking humans for their natural prey, seals, or sea lions.

Typical shark attacks result in one bite followed by the shark fleeing the area. It is very uncommon for a shark to come back for a second bite. The issue is that due to their sheer size these bites can result in serious tissue and organ damage that can result in death. In the US about 7% of great white attacks are fatal. Other areas such as Australia have reported much higher numbers in the 60% range.

Surprisingly little is known about this feared fish. Using fossil records it has been estimated that great whites have been around for between 12-18 million years. 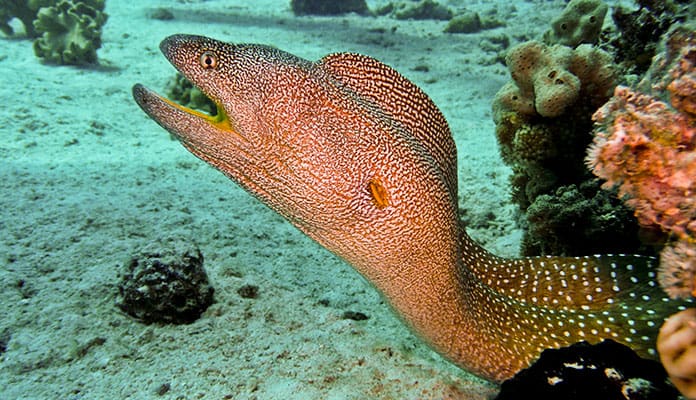 These eels can easily be seen when snorkeling in tropical areas, specifically common in the Indo-Pacific ocean. Living in shallow reefs where there are many rocks and crevices for them to hide in, Moray eels typically have vivid colors that are very appealing. There are more than 80 species of Moray eels. Typically Moray eels are under 5 feet in length. This is except for the Thyrsoidea macrurus, an eel that grows to an impressive 11.5 feet long.

They are most easily identified by their lack of pectoral fins. With their smooth thick skin, these eels have a wide jaw that houses sharp, strong teeth. They are known to bite and seize holding their prey (fish or crustaceans) captive. If they do bite humans it delivers serious wounds. While Moray eels do have vicious bites the real danger comes with eating them. Their flesh has been known to contain toxins that cause humans illness and even death. 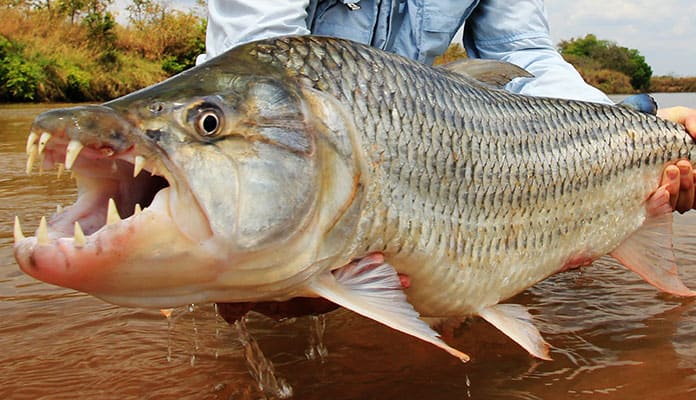 You will not be just swimming by this fish without realizing it. Their name doesn’t reflect the way they look but rather their attitude when in a stressful situation (like being caught on the end of a fishing line). These fish are also territorial and will become aggressive when their area is encroached on. Tigerfish can grow up to nearly 7 feet (2 meters) and weigh upwards of 125 lbs (57 kg). They are found in the Indo-Pacific region of the world as well.

These fish are usually found in Africa in freshwater. They are part of the same class of fish as the piranha and electric eel (characin family). Tigerfish are best known for having stripes along their body. Also, when they are fully grown their teeth are large in proportion to their body that makes them look intimidating. 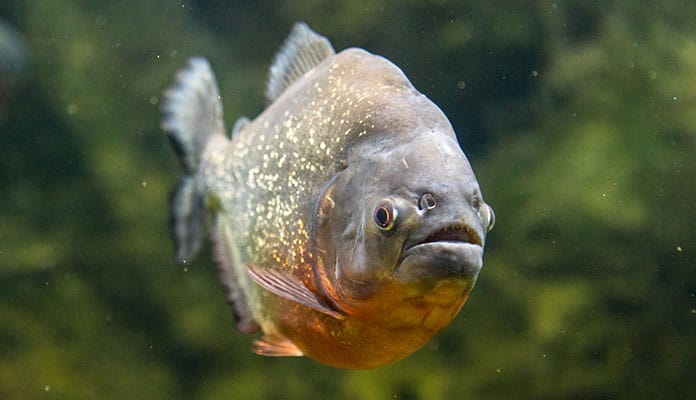 Also called Caribe or Piraya, the Piranha is another known fish that is very deadly. This carnivorous fish only grows to be about 2 feet in length but thanks to its razor-like teeth it can have quite the bite. Found in the rivers and lakes throughout South America the danger of these fish has been largely sensationalized by the movie industry, specifically the movie Piranha. Consisting of more than 60 species, most are scavengers or feed off plant material.

Being either black or silver in color these fish have a large blunt head with strong jaws.

The Red-Bellied Piranha is the most infamous for being lethal as they have the strongest jaws housing the sharpest teeth. This species can grow up to 20 inches and hunt in groups of more than 100.

Piranhas, like sharks, are drawn to the smell of blood. Most species never kill large animals and piranha attacks on humans are very rare. 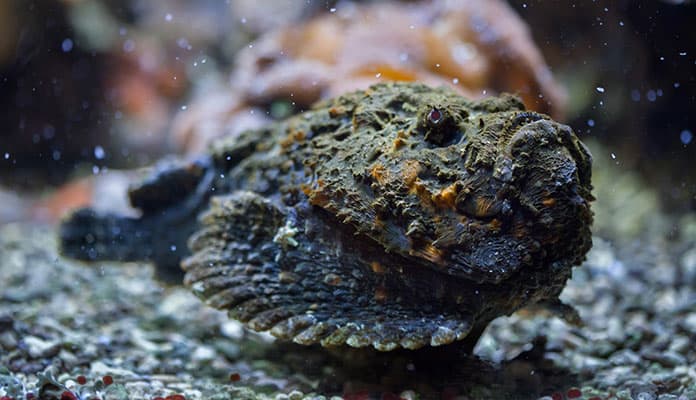 These fish are named appropriately. You would probably swim right by a Stonefish without even realizing it. They are pros at blending into their environment. Commonly found in the shallows of the Indo-Pacific ocean you are likely to spot these fish while snorkeling. They typically live alongside rocks and corals making them blend even further. These slow thick fish are bottom-dwellers. With large heads and mouths, these fish have small eyes and bumpy skin.

These fish only attack when provoked. Most people do not see them and step on them resulting in them injecting venom into their victims. Similar to the sting of a stingray these fish have a dorsal fin spine that they use to protect themselves. Wounds from these fish are incredibly painful and can even be fatal. 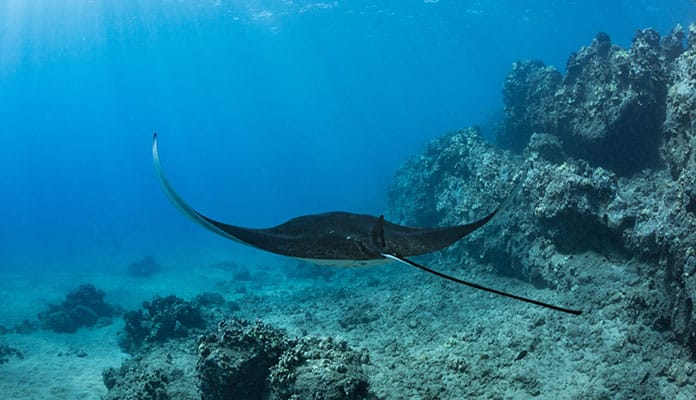 These are the largest of rays from the stingray family and can grow to upwards of 25 feet in diameter (7 meters). They are not circular in shape but have a body that makes them look like they have wings. Their short tails are where their stinging spines are located.

It may not seem like it, but manta rays are a close relative to sharks. They like tropical areas and are often seen near the surface of the water. Some even “fly” out of the water. Their diet consists of small fish and plankton that they direct into their mouth with their winglike bodies.

Even though these stingrays can grow to massive sizes they are not a direct threat to humans. They can, however, impale you with their stingers, but they only do so when they feel threatened. You have no reason to fear this majestic animal. 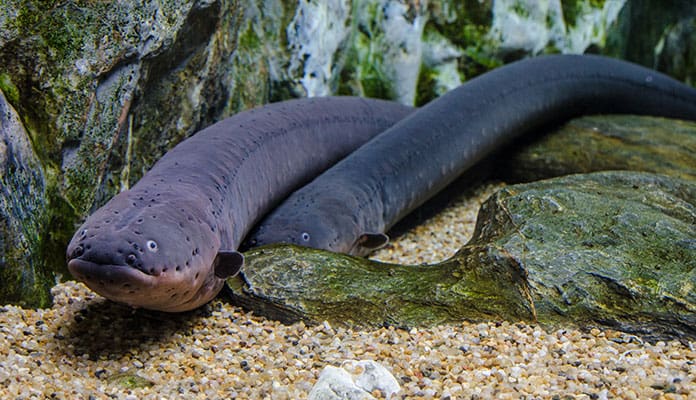 This species of eel (Electrophorus electricus) is found mainly in South America. It is dangerous because of the electricity it generates through its tail. This shock can stun even a full-grown man which can cause you to drown as you cannot swim away. It can generate anywhere from 300 to 650 volts which is nowhere near the 30 000+ volts a stun gun makes.

Its name is also a bit confusing. It is not a true eel because of its fin on its underside. It is actually a part of a group of marine life called characin fish (such as neon tetras and piranhas). You may be surprised to learn that electric eels need to come to the surface to breathe air.

These eels have long bodies that can get to 9 feet (2.8 meters) long and weigh close to 50 lbs (22 kg). Its tail is where it houses most of its body (80% to be exact). It isn’t a direct threat to humans. It prefers small, slow fish that it can simply eat. It only poses a threat when it feels like it’s being cornered or attacked.

While this list might look intimidating, it is not meant to scare you. There is plenty of friendly fish in the water. Always remember that attacks in the water are most often completely avoidable with some common sense.