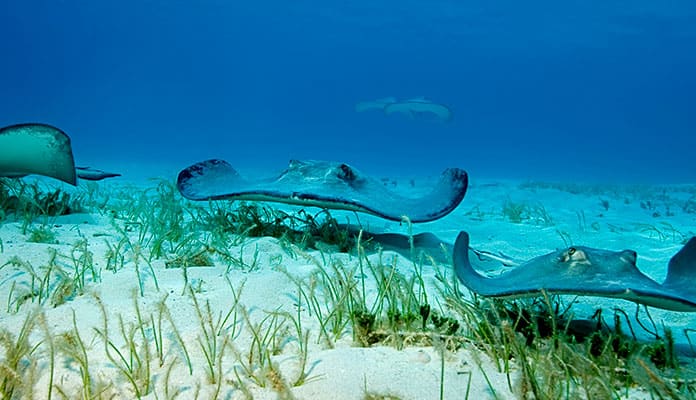 Stingrays are some of the most beautiful creatures found in the sea. They are majestic when they swim through the water. Most people don’t realize that stingrays are actually a cousin of the shark. There are over 500 species of rays that fit into 13 families. What makes this marine life special is that they can be found in warm tropical water along with cold water.

For another thrill, be sure to read about the types of eels you may see in the water.

Ever since the death of Steve Irwin stingrays has had a bad reputation. Often mistaken for being dangerous fish stingrays are actually quite shy and can be very friendly. There are many places in Mexico where you can take a boat to a sandbar in the ocean and swim with and feed a wild stingray. Rays only attack when they feel threatened, most often because someone has stepped on them. Whenever you are walking in the ocean be sure to shuffle your feet rather than taking a step to avoid trouble with these gentle creatures.

Our love for stingrays is strong, that is why we decided to list our favorite types of stingrays out there. With a bit of knowledge, we know you will love these fish as well. 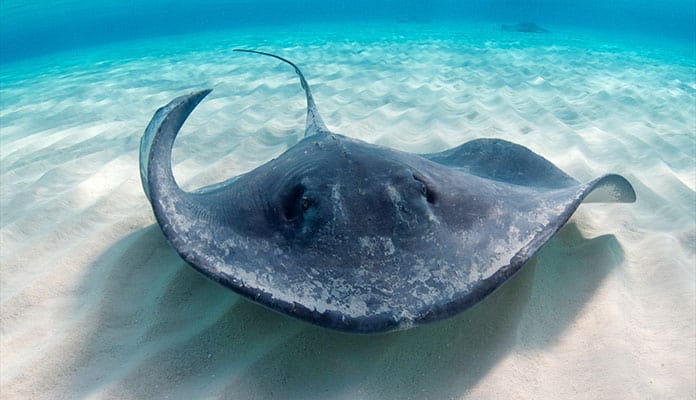 These are some of the largest stingrays known to man. They are found in places like Mozambique, Australia, South Africa, and New Zealand. The smooth stingray can grow to over 14 feet (4 meters) in diameter and weigh a staggering 770+ lbs (350+ kg). This type of stingray has two stings – one in the front and a larger one in the rear. These are found in water ranging from around 600 to 1500 feet deep (180 – 480 meters). 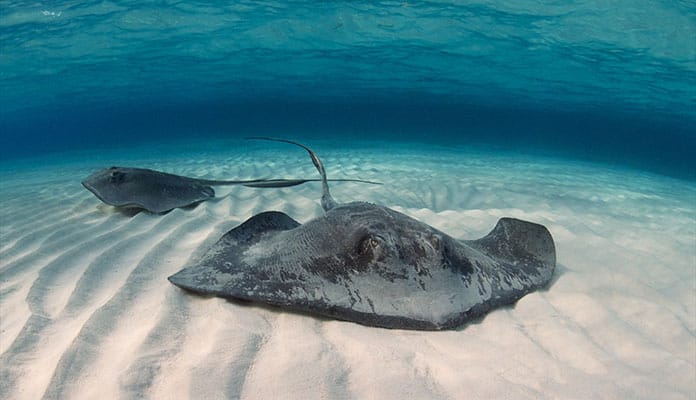 The southern stingray has a diamond-shaped body with a brown top and white belly. They are only found in warm water like the Caribbean Sea and the Gulf of Mexico. It is not uncommon to see these when snorkeling or scuba diving. They like to partially bury themselves in the sand with only their eyes and tail visible. Southern stingrays can grow up to around 60 inches (150 centimeters) in diameter. 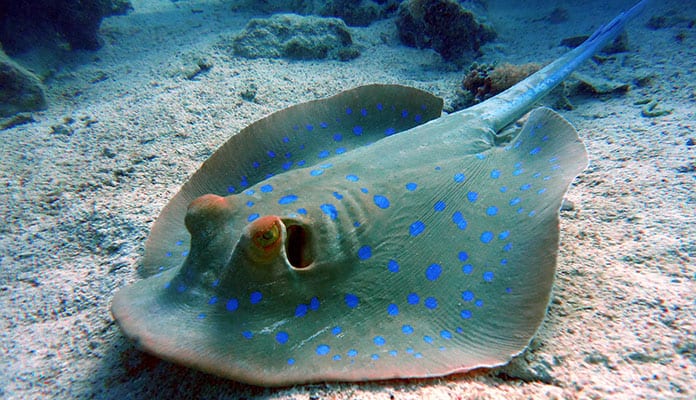 This is one of the most colorful of the rays. It has a green body with baby blue spots. It is mainly seen in the Indo-West Pacific region including Japan, Australia, and the Red Sea to the Solomon Islands. These rays can grow to a diameter of 27.5 inches (70 centimeters).

These stingrays are one of the few species that don’t like living on the seafloor. Instead, they can be found swimming in the open ocean. Their long body has an inky top that features spots while their bellies are white. They also have one of the longest tails of all the stingrays. Instead of a typical round body, eagle rays have bodies that make them look like they are flying with wings. 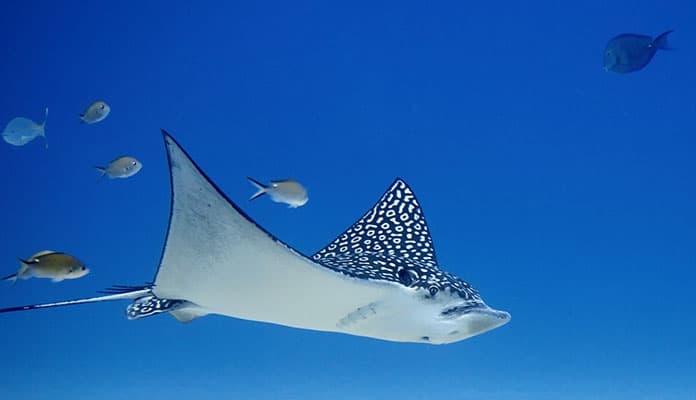 If you had the choice to see only one ray it should be the Spotted Eagle Ray. It has a body that is mainly black, or dark blue, with so many white dots you wouldn’t be able to count them all. They can grow upwards of 16 feet (5 meters) and weigh in at over 500 lbs (230 kg). The spotted eagle ray likes to swim in packs and can even be seen jumping out of the water (hence its name). They can be spotted in water along the equator such as in Florida, Southeast Asia, and northern Australia. 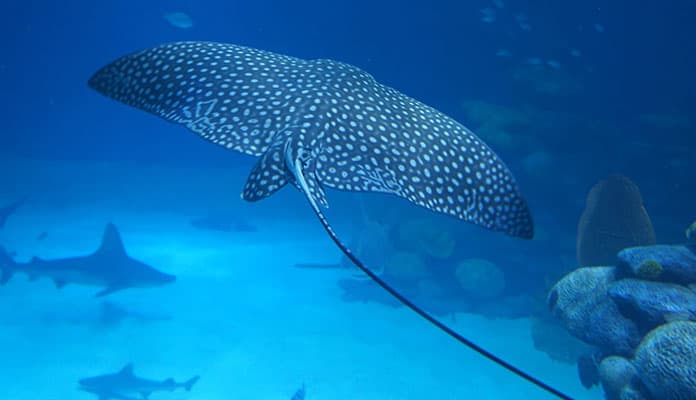 These are the largest of the rays and are part of the eagle family. Living mostly around coral reefs these large rays frequent tropical waters all over the world. Their size may surprise you growing to 25 feet (7.6 meters) in size and typically weighing about 5,100 pounds. Despite their size, they move gracefully through the water and are incredibly agile. Similar to whale sharks, Manta rays feed off plankton and fish larvae. They also house entire ecosystems with cleaner fish such as wrasse and angelfish swim in their gills and feed off dead tissue. 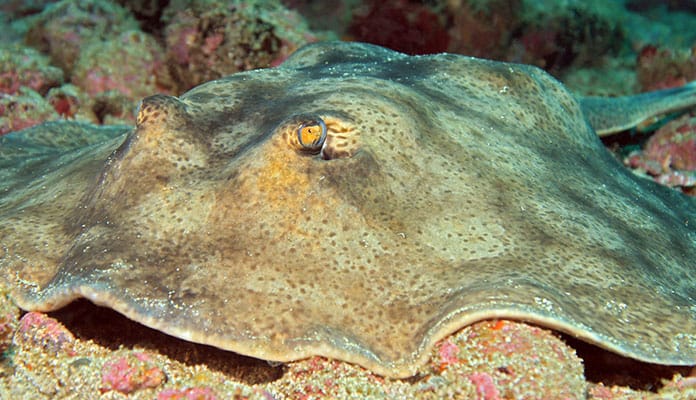 If you frequent the eastern Pacific waters from California to Panama then you have likely come across a Urobatis Halleri, or the Round Stingray. This small ray buries in the shallow sands and feeds mostly on invertebrates. The yellow and brown coloring flawlessly blends with the sand and therefore many water goers step on them resulting in a string. The sting, while painful, is not lethal.

Diving with stingrays is an exciting time. Whether you are swimming alongside a massive Manta Ray or catch a glimpse of a timid Spotted Eagle Ray you will likely get quite a thrill. These fish are incredibly graceful in the water and can be quite timid.

Whether you are snorkeling off the coast of California or taking a dive vacation to tropical waters you will likely come across many stingrays. Being sure to have your underwater camera will help you capture all the grace of these animals. Keeping a safe distance and being sure to never scare or step on a ray will keep you both safe and allow you to have an unforgettable trip.