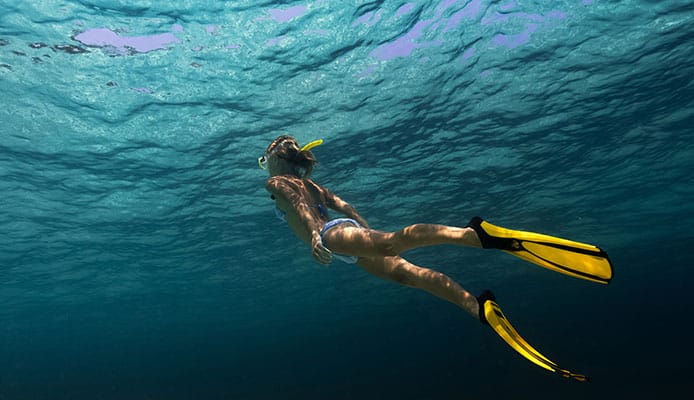 Freediving is as ancient as humanity itself. Scientific studies support the idea of humans having spent most of their early evolutionary development years in waters.

If freediving interests you, you would probably want to know the history of freediving. After going through this article, you should know every important thing there is to know about the origin of the freediving sport.

The Ancient History of Freediving

Humanity has been freediving for food for more than 8,000 years. After studying the remains of the Chinchorian, an ancient community that existed in 6,000 BC in what we call Chile today, archeologists concluded that the community had suffered from exostosis.

Exostosis is a condition where the bone close to the end of the ear canal starts growing, across the opening, to aid with protecting the eardrum from being exposed to cold water repeatedly. This shows that the Chinchorian community had spent a significant amount of time underwater.

Alexander the Great, back in 332 BC, used freedivers to dismantle underwater booms which kept his ships from entering the harbor during the Tyre siege.

He got to depth by holding onto a huge rock. He kept a rope tied around his waist so that he could be pulled back to the surface. Due to restricted vision, trouble equalizing, and issues with the cold, freediving were not considered to be a means of recreation when Stotti dived.

In 1927, Jacques O’Marchal created the first freediving mask. Jacques designed it to close the nose. Maxime Forjot improved the mask using a compressible rubber pouch that allowed the divers to cover the nose. The rubber pouch helped with equalizing the ear pressure, making diving safer.

The first freediving fins were designed by Louis de Corlieu and patented as swimming propellers back in 1933. Louis’s design was later modified and mass-produced by Owen Churchill. A diver and physics student known as Hugh Bradner created the first wetsuits using neoprene back in 1951.

Modern freediving was born back in 1949 when Raimondo Bucher dove for 30 meters to the bottom of the sea close to Naples on a wager. Despite the scientists predicting his death from the crushing pressure available at the bottom, he returned to the water surface unscathed.

Over the following 20 years, the freediving sport exploded. People started locating the deepest free dives just to test their limits. Bob Craft, Enzo Majorca, Jacques Mayol, and Bob Croft were at the center of the stage. 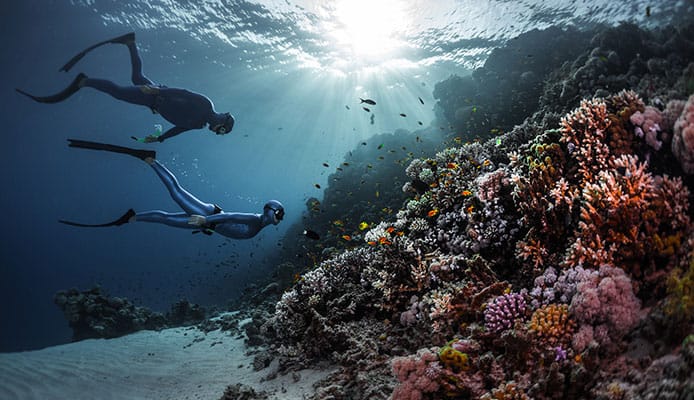 Bob Croft spent 25 hours each week in a tank featuring a depth of 30 meters teaching the submariners how to escape from the stricken submarines. Bob Croft had the ability to hold his breath for more than 6 minutes. His amazing capabilities led to him being used as a guinea pig by Navy scientists who were studying the blood shift phenomena, which they had witnessed in diving mammals.

On top of establishing 3 depth records within a period of 18 months, Croft became the first person to dive beyond 64 meters back in 1967. In 1968, he dived to over 73 meters before retiring.

Jacques Mayol, a French diver, became the first individual to break the 100 meters barrier. In 1988, Angela Bandini, an Italian Diver, set the world record after diving for 107 meters.

Tanya Streeter started diving in her mid-twenties. She managed to reach a 113 meters depth back in 1998. She set a 160 meter No Limit dive record back in 2003. This record has never been broken by any other woman.

Natalia Molchanova had over 40 world records. The diver was still breaking records in her 50s. She was the first woman to break the 100-meter mark in the Constant weight freediving after reaching the 101 meters mark back in 2009.

William Trubridge was the first person to dive for more than 100 meters without fins in the Constant Weight discipline. The diver was also a double world record holder.

Herbert Nitsch, an Australian freediver, has held 32 world records across all the freediving disciplines. After descending to a depth of 214 meters, he became the world’s No Limits freediving record holder. This record is quite tough to break considering the diving risks and dangers involved.

One thing most people learn after going through the freediving history is that the sport is not new. In the beginning, humanity free dived to feed their families. In the second half of the 20th century, people started seeing freediving as a recreational activity.

Today, inspired by the freediving pioneers, millions of people across the globe will pack their freediving equipment and try to locate ideal diving spots in different parts of the world. With improved technology, including better freediving watches, freediving has become much safer and more enjoyable.