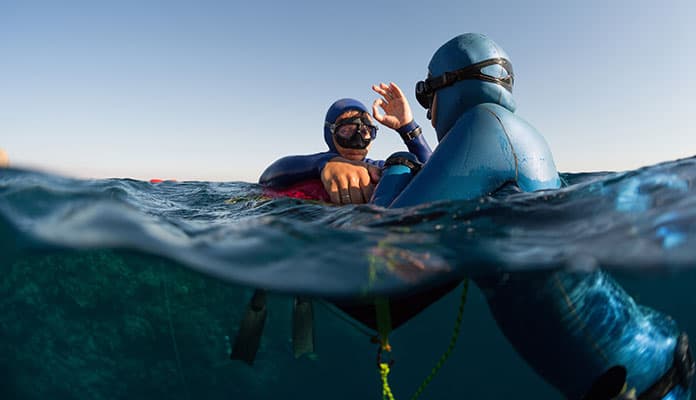 Freediving has been getting more and more attention from the media and the public over the past years. And rightfully so, since only a handful of other sports can match freediving when it comes to testing the human body’s limits in an unforgiving environment. If you are contemplating giving this extreme sport a try, here is a quick overview of what freediving is and its different disciplines. Also, we’re including a list of the deepest free dive in the open water categories that will leave you amazed at humanity’s successful attempts to conquer the deep blue.

Simply put, freediving means divers take one breath, then dive as deep as they can (with no tanks or other breathing apparatus), and come back up again. Freediving paints a picture of incredible superhumans who are capable of holding their breaths for unbelievably long times and plunging into the depths of the ocean. Freedivers brave the cold waters, the enveloping darkness, and the crushing water pressure, relying only on their physical and mental capabilities to keep them alive until they can break through the water’s surface again.

Freediving has been around for thousands of years already. During ancient times, freediving was practiced out of necessity – for finding and catching seafood and for collecting tradable goods like pearls. However, it has since evolved into a recreational pastime and eventually into a competitive sport.

This is one of the two freediving disciplines that is performed in a swimming pool instead of the open waters. Here, divers lie on the water’s surface with their faces submerged in the water and hold their breath for as long as they possibly can.

Dynamic Apnea is the second freediving discipline performed in a pool and can be done with fins (DYN) or without fins (DNF). Instead of diving deep into the ocean, DYN and DNF athletes swim across a large pool for the maximum distance they can without coming for air. 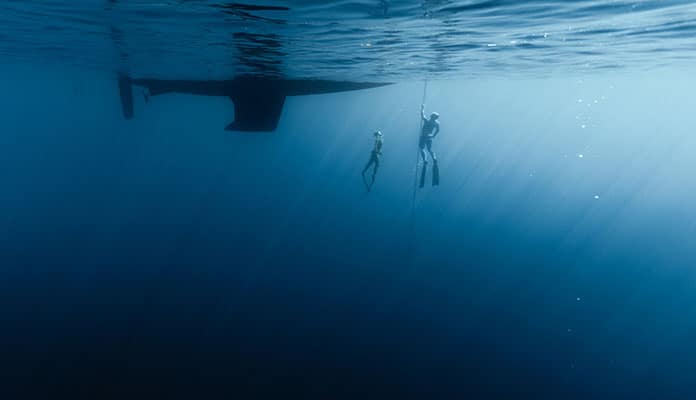 Constant Weight Freediving is considered by many as the purest form of freediving. It is divided into two sub-disciplines: CWT where divers are allowed to use freediving fins and CWF which is done without fins.

Russian Alexey Molchanov holds the record for the deepest CWT dive at 129 meters in 3 minutes and 50 seconds. This record-breaking event took place in La Paz, Mexico in October 2016.

Alessia Zecchini set this record in the Suunto Vertical Blue 2017 freediving competition held at Dean’s Blue Hole in the Bahamas. She completed the dive by reaching depths of 102 meters in 3 minutes and 30 seconds.

Submerged for 4 minutes and 14 seconds, William Trubridge set the world record in this discipline in 2016 by diving 102 meters into Dean’s Blue Hole, a 203-meter sinkhole lagoon in the Bahamas. This dive gave him his 18th world record.

In Apr-May 2016, Sayuri Kinoshita from Japan set the record for this category by diving to depths of 72 meters and being completely submerged for 3 minutes and 14 seconds. She is the first-ever Japanese to hold such a record.

In this freediving discipline where no fins are worn, divers pull themselves to the bottom and back up using the dive line. A lanyard is attached to the diver’s ankles instead of the wrist so that it doesn’t interfere with the diver’s pulling action.

In 2016, William Trubridge broke his old record (121 meters) by plunging 124 meters under the sea and holding his breath for 4 minutes and 34 seconds.

Jeanine Gasmeijer set a new world record for this discipline in 2016 in the Bonnaire Deep Sea Challenge by diving to depths of 92 meters in 3 minutes and 46 seconds.

In this freediving discipline, divers use a weight to pull them down into desired depths and then release this weight. Once released, the divers make their way back up to the surface by a combination of finning (using fins) and pulling on the rope. This is a non-competition discipline but records can still be set in it.

Stavros Kastrinakis set the record for this freediving discipline in Kalamata, Greece back in 2015. He dove to depths of 146 meters and completed the dive with a time of 3 minutes and 33 seconds. This is the dive that earned him his first world record.

Ninja Van Den Broek is no stranger to freediving records, having 20 of them to her name. It was thus no surprise that she was able to set a new world record by diving 130 meters in Sharm-el Sheikh in 2015. 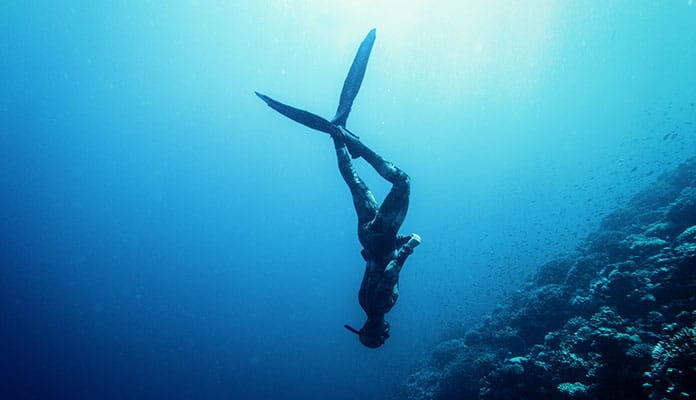 The No Limits (NLT) discipline is often the one that makes the most news simply because it is in this discipline that the deepest of free dives are done. Here, divers use a weight to pull them deep into the ocean and then use a buoyancy device to pull them back up to the surface.

A highly decorated freediving athlete with over 30 world records to his name, Herbert Nitsch set a new record for the No Limits discipline in 2007 by diving 214 meters deep. This amazing feat earned him the title “The Deepest Man on Earth”.

World Champion free diver Tanya Streeter dove 160 meters into the blue in the waters of Club Med Turkoise in Providenciales with a total dive time of 3 minutes and 26 seconds.

Freediving is truly an exciting and inspiring sport, testing the extent of human capabilities in a frontier that is beautiful as it is unforgiving. The amazing deepest free dive records mentioned above only goes to show that we can overcome our limits if we are to persevere. Freediving, whether done for recreation or sport, is one activity that is both challenging and rewarding at the same time.