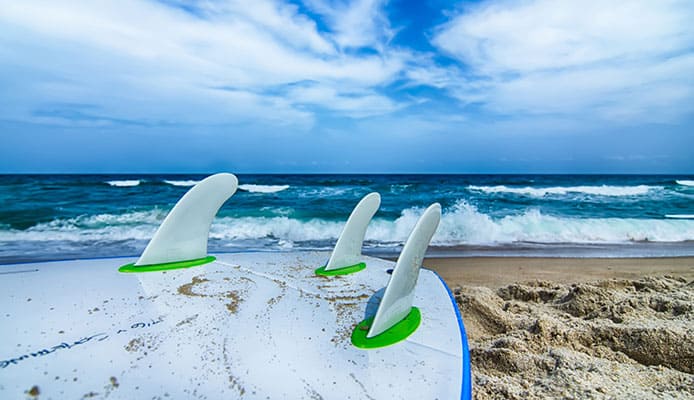 Surfing the waves can be one of the most exhilarating and exciting pastime activities. Not only is it great fun, but it also offers amazing benefits of surfing to your cardiovascular system. For some, it is the perfect combination of exercise and fun. The great thing is that if you are just starting, there are some excellent surfboards for beginners.

However, the surfboard fin types, fin size, and fin configuration can have a significant impact on how the surfboard rides the waves and how you feel when on it. To best choose the right surfboard fin set up and fin system, several considerations need to be made.

This is the surfboard fin types and systems guide.

There are two main types of fin setups. These are the glassed-in fins and the removable fins. With the glassed-in type, the fins are fixed permanently onto the surfboard. They are smoother and allows the surfboard to glide much more easily on the water.

Removable surfboards are just that—removable. They offer a type of versatility that you will not get with the glassed-in fins. You can remove them and replace them with fins of a different shape and size. Just make sure that the right fins go into the right fin box otherwise you could damage your surfboard.

One of the benefits of a removable fin setup is that you can easily store your surfboard in a surfboard travel bag.

Among the most essential factors to consider when picking the right surfboard for you is the fin size. To do this you will need to consider your weight. After this, the next step will be to check the fin configuration of your surfboard.

It’s a good idea to have surfboard traction pads to help you maintain your grip as you stand on your surfboard.

Take your surfboard and flip it and you should see several fin boxes. This is the fin configuration and will often be between a single fin to five fins.

Other surfboards will come with up to 5 fin boxes allowing you to change and configure to your liking. Other boards will feature a single fin box and smaller side fins.

If you want to go surfing a long way from where you live then you will benefit from using surfboard racks for cars.

The single fin configuration is the traditional type of surfboard fin setup. It constitutes a large fin mounted on the surfboard. While the single fin is good for straight and fast surfing, the turning is limited.

However, the surfer will be more stable and is better able to predict his movements and the movements of the surfboard. This also gives him more control.

With the twin fin setup, the surfboard is more maneuverable compared to the single fin setup. This setup is not recommended when you’re riding big waves. You will often find this configuration on shortboards as it helps to increase speed.

This configuration is also referred to as thruster. It is among the most popular fin sets up on surfboards of varying sizes and shapes. There are two fins on the outer sides that are placed a bit forward and closer to the center of the surfboard.

The third fin is placed further behind the board at the center level of the two outer fins. This third fin is symmetric which allows for stability and greater control of the surfboard.

When you are riding smaller surfs, you can achieve even greater speeds using the quad fin setup. It channels the water through the center of the surfboard which results in faster speeds.

The two fins that are located near the rails provide greater stability to the surfboard. This surfboard fin setup is also excellent for making the drive through turns.

You may get a surfboard with a 5-fin configuration. Note that not all 5 fins will be used for surfing. With surfboards that feature five fin boxes, you can choose the configuration that you like and do not always have to use all five fins. This means that your surfboard is versatile and can easily be changed to a quad fin, triple fin, or twin fin setup.

The dimensions and geometry of the fins 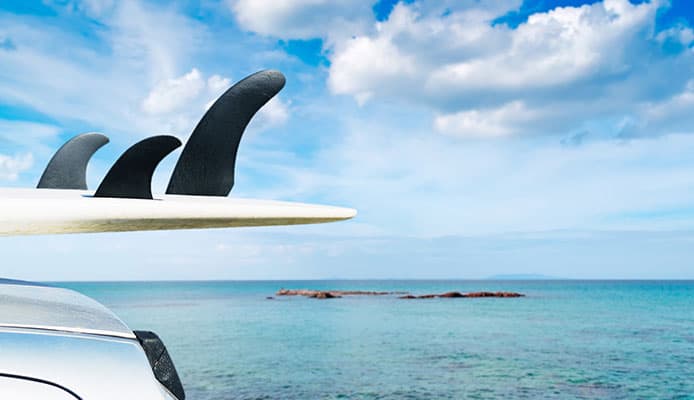 This is also called the rake and refers to the arch of the fin from the top to the bottom. The more the angle the less stable the fin is yet the better it is at allowing the surfboard to make sharp turns.

The opposite is true. The smaller the angle of the sweep, the more stable the surfboard but it will not make sharp turns. It is also much easier to use your camera for surfing especially if you are doing it for the first time with a smaller angle of the sweep.

The base of the fin is the longest part that comes into contact with the surfboard. The length of this base is a very important consideration whenever you are choosing a surfboard based on its responsiveness.

The longer the base, the more surface area the water has to cover which means more stability. However, this will also result in fewer sharp turns. If you want quick and sharp turns, you want to go for a smaller base.

If you are a beginner surfer check out some surfing tips and tricks.

The foil of the fin refers to the sides of the fin and how they are shaped will determine how responsive and fluid the surfboards feel. In most instances, the middle fin has a convex shape on both sides which allows an even flow of water and thus more stability.

However, with the outside fins, you can get a convex shape on the outside and a flat face on the inside. This also adds stability with an easy and fast flow of water through the middle of the board.

On the other hand, you could get a convex inner face and a flat outer face. This increases lift, reduces drag, and increases the oversell speed of the surfboard.

How flexible a surfboard fin is will determine the type of feel that you are going to get on your surfboard. Softer more flexible fins allow for sharp turns and are ideal when riding softer waves. They are also great when carrying multiple surf gear and gadgets.

On the other hand, if you plan on going surfing during large waves, then you will need to go for the stiff surfboard fins. These are easier to control. It also explains why surfers of all ability levels will opt for stiff fines.

The more flexible fins make the surfboard livelier giving that skateboard feel, but a higher level of control is required.

The height or the depth of the surfboard fin refers to the length from the base of the fin to its tip. The longer the fin, the better it grips the water which means more control overturns.

The opposite, where the surf fin is small and short causes the surfboard to feel buttery in the water as it doesn’t have a lot of surface area to grip the water. If you like smooth maneuvers then you will enjoy this surfboard fin type. Note that it requires a higher level of skill as well.

This refers to the angle of tilt of the surfboard fin. If you want a more maneuverable and faster surfboard then you need to consider the cant. Canted fins are faster and more responsive.

Simply put a fin that is lying at a 90-degree angle from the base of the board has no cant.

Whichever the degree of cant, surfboard wall racks will help you store your surfboard in the most convenient way when not in use.

There are many different factors that you will need to consider when shopping for a surfboard. Once you understand your weight, you also want to consider the types of waves that you will be surfing. Also decide whether your style of surfing requires you to make quick, sharp turns and how fast you would like the surfboard to go. Try out different surfboards and figure out for yourself which one works best for you.