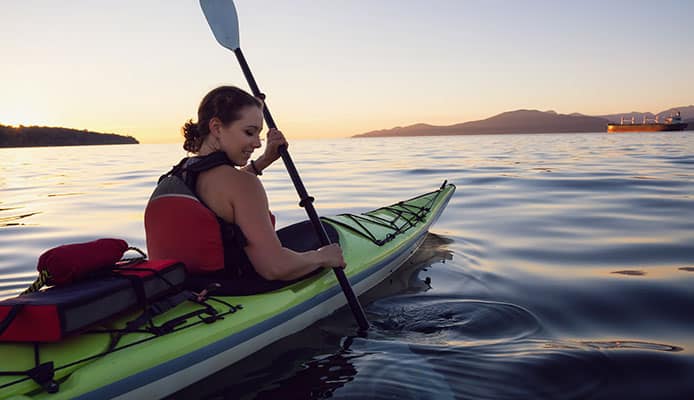 Bulkheads are simply compartments inside a kayak that provide spaces where the user can store extra gear and kayak accessories. As far as compartments go, there are two types of kayaks—those that have compartments and those that do not.

Integrated kayaks lack compartments and only have one opening throughout the interior of the kayak. On the other hand, bulkhead kayaks have a compartment near the bow as well as one near the stern.

You can also think of bulkheads as internal spaces in the kayak. They trap air making the kayak more buoyant. These, however, are only found in hard-shell kayaks. Inflatable kayaks do not have bulkheads.

Bulkheads are airtight, if that is, they are installed correctly. The fact that water cannot get into these compartments means that you can keep your food dry or other different types of gear including your kayak fish finder that you may need to carry.

What’s more, you can store your kayaking gloves until you really need to use them.

Bulkheads are made from different materials one of which is foam, this can be great for boosting the buoyancy of the kayak. If the foam bulkheads are installed on both the front and the back of the kayak, then it becomes very hard to sink the kayak.

The third benefit of having a foam bulkhead is that water doesn’t get to flood the kayak if it gets in. Instead, it will only fill the cockpit which makes it easy to empty and allows the kayak to remain afloat.

Many believed that a bulkhead kayak is safer than an integrated kayak. Others believe it is the other way around reason being that it can be extremely hard to right a capsized kayak. Some find it completely impossible to right this type of kayak without first getting out of the cockpit.

The reason why it gets so hard to right a bulkhead kayak is because of the design of the compartments themselves. An integrated kayak will take only a short time to flip over and drain the water. With the bulkhead kayaks, however, draining the water in the different kayaks is not as fast and will take time.

There is a relationship between bulkheads and kayak hatches. While the bulkheads will result in airspaces inside the kayak, the kayak hatches make it possible to access those spaces. The small hatches will therefore allow you to store and gain access to some small necessities that you will need during your trip.

To best define the kayak bulkhead, it is the wall that runs all the way from the hull to the deck. It is sealed. This internal vertical wall will easily trap air and will add to the buoyancy. This is the case with all models of kayaks including a river or fly-fishing kayaks, sit on top kayaks, or recreational kayaks.

So, should you get an integrated kayak or a bulkhead kayak? the choice is entirely up to you. However, the more air compartments in the bulkhead kayak make it more stable and more buoyant in the water. In case of a crash or accident, you are sure that the kayak will remain on top of the water even while the cockpit takes in water.