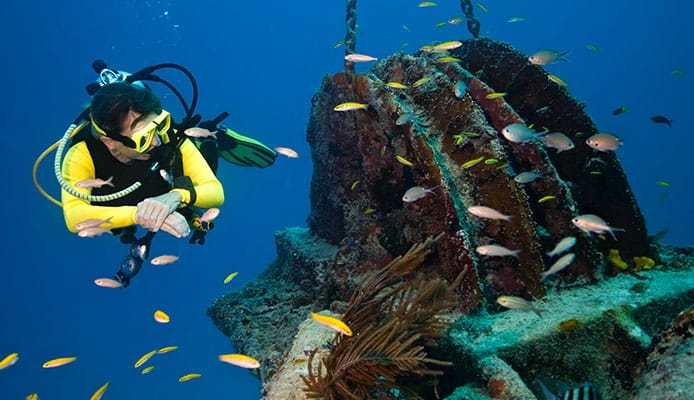 At any one time when an object enters the water, these two forces are playing their part and will cause either one of three things—the object will float, the object may sink or the object may become suspended in the water.

If you are a scuba diver then having the right scuba gear package is key. Extra gear such as dive watches is also very helpful as they help confirm the readings from the other gear. We will look at buoyancy and scuba diving as we understand more.

Three main terms are used to describe the buoyancy of an object. Negatively buoyant means that the object will sink. Its weight is more than the weight of the displaced water.

Saltwater is heavier than freshwater due to the simple fact that it has salt dissolved in it. One cubic foot of seawater weighs roughly 64.1 lbs. An equal amount of freshwater will weigh 62.4 lbs.

This is because the water molecules will pack themselves even tighter around the salt. They are held closer than they normally would be held in freshwater. Thus, when you add a cubic inch of salt to the water, the water density will increase by less than that cubic inch.

The upwards force in saltwater will therefore be greater. If the object displaces 62.4 lbs. in freshwater, the same object will displace 64.1 lbs. in saltwater.

Moving From Freshwater To Saltwater

In the case of a scuba diver, the diving regulator will help manage his buoyancy but we shall look at this later on.

How About A Scuba Diver?

Based on the science above, you can predict what would happen to a diver’s buoyancy in saltwater when he moves from freshwater.

The same principle applies. A diver will experience more of an upwards force in saltwater than he would in freshwater. This means that the diver should take action to adjust the weight he is going to carry. He will need to carry more weight in saltwater and less weight in freshwater.

Depending on his goals the diver may want to get to the bottom of the ocean. A good pair of dive boots will help keep his feet safe from sharp rocks and objects.

There are several other factors that the scuba diver will need to keep track of when determining just how much weight to carry. For example, he needs to know his own weight, scuba tank weight, dive equipment as well as exposure protection.

The equipment should always be in top form and one of the ways of ensuring this is to use dive bags for protection.

All these contribute to the diver’s total weight and thus the downwards force he exerts on the water. Sometimes the diver may need to change his wet suit or dry suit depending on his chosen diving location and type of water. The amount of upwards force that he experiences will depend on all these factors.

The diver will also need to consider the water salinity and water displacement.

One of the main ways that the diver can determine his overall buoyancy is through a buoyancy test whenever he changes from freshwater to saltwater or vice versa. The diver may need to increase his weight to double when moving from saltwater to freshwater.

Always when diving it is a good idea to make use of smb for scuba diving so that other people know where you are diving. In the case of a rescue scenario, it will make it easier to locate you.

Other Factors To Consider 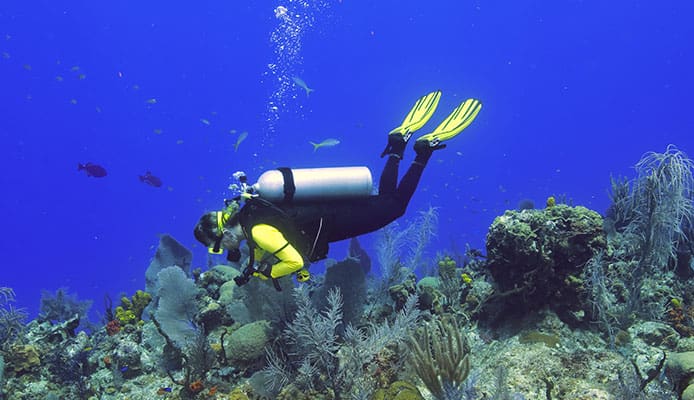 Remember what we said about changing the weight based on the chosen diving location? Well, the salinity of ocean water is not constant across the world’s oceans and seas. Some areas are more saline than others. Of course, the saltier the water the more buoyant the diver.

We saw that a cubic foot of saltwater weights 64.1 lbs. on average. However, in some locations such as the dead sea, the water weighs a whopping 77.3 lbs. per cubic meter.

Another factor that determines the buoyancy in freshwater or saltwater is the water temperature with cold water being denser than warm water.

Always ensure you are wearing dive gloves to keep your hands warm in the cold water.

Swimming In Freshwater vs Saltwater

The shape of the swimmer’s body however will also determine how buoyant they are. People with more fat are naturally more buoyant since fat is less dense than water. More muscular people are more likely to sink deeper than people with fat since muscle tissue is denser than water.

That said, it’s important to keep in mind that the body is 80% water so, in a relaxed state, you are more likely going to float than to sink.

If you are open to low light dive scenarios, then having the right gear is essential one of which are good underwater dive lights.

Fresh water and saltwater are completely different realms that require the diver to make certain adjustments in their weight to better move through the watery world. It is the salt that makes the difference between the two different water bodies. It causes water molecules to compact tightly around the salt molecules which means more water molecules in saltwater per cubic cm than in freshwater.