Beer pong is one of the simplest yet entertaining games in the world, but then again, a game probably needs to be simple when most people play it when they’re drunk! It’s hard to improve on a game that provides so much entertainment, but playing it while you’re in a pool may just do that.

Having the best floating beer pong table could be your key to having a day that you’ll never forget. Here we aim to find the best inflatable beer pong table on the market so that you can make the most of your time in a pool while playing one of the most fun games in the world.

Some have different features than others, so before you go out and organize that party, make sure you read on and check out our favorite floating beer pong table reviews before picking the best one for you and your friends. 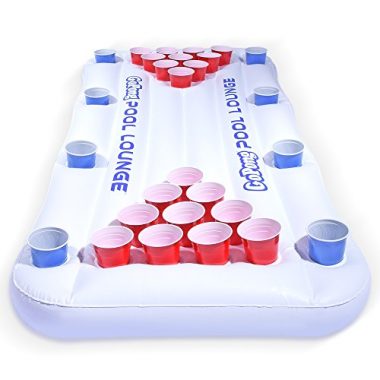 This is a 6 foot long table that will be able to give you hours of fun. It has room for the standard 10 cups with additional space for 8 cups along the side for your regular drinks. It comes with 6 ping pongs as well as tethering grommets to keep it in one place. This can also be doubled up as floating lounge for when you just want to lie down and relax. 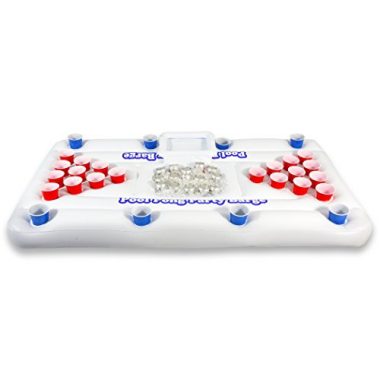 One of the great features of this of this beer pong table is that in the middle of it is an enclosed cooler section in which you can chill all your favorite drinks. It is also 6 foot long so could easily double up as a float when not in use. It holds the standard 10 drinks of a beer pong game with an additional eight holes on the side for extra drinks. It comes with a warranty so its quality is guaranteed. 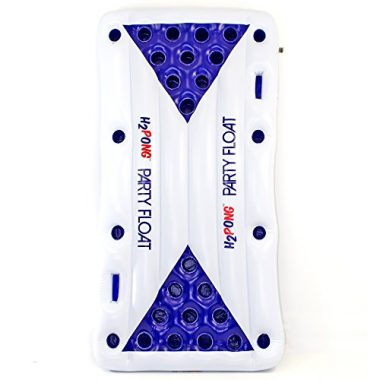 With float comes with 5 ‘beer pong’ balls, but one great feature is that there are little pockets where the balls can be placed safely until needed. It is made out of thick, tear resistant plastic so you can have the peace of mind that your part won’t be ruined. As with most standard floating beer pong tables, it comes with space for 10 cups each as well as 8 spaces on the sides.

This is a 6 foot long table as most are, but is likely to be too thin to be used as a conventional float. It comes with 3 balls with the usual holes for cups available, however, it doesn’t hold any cups on the outside. It has rapid inflation so it will be up and ready to use in no time. The design of the table is fun and bright as well. 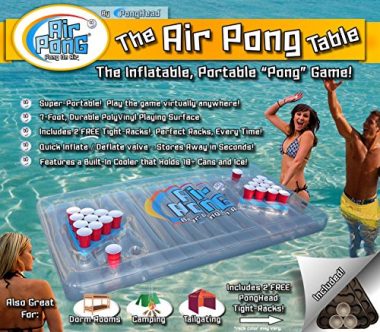 This beer pong table is larger than most, it’s 7 foot long and very wide too, which would make it comfortable as a conventional float. It also has a cooler section in the middle but perhaps the best feature is its design, as with position of the cup holders mean the table stays very stable in the water so that you don’t spill your drinks. 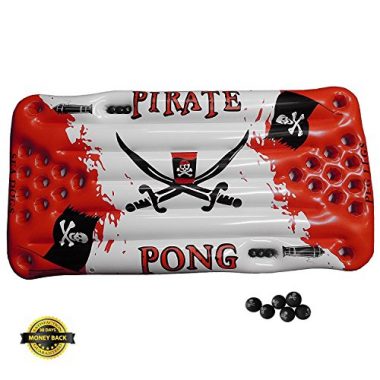 This raft comes with a more fun design than most with its pirate-based theme. It has the regular 10 slots each for the cups, and a hole on each corner for regular drinks. It comes with 6 balls that are all pirate themed as well. Its 6 foot long with extra thick material to stop any punctures. This is a fun raft which is sure to bring out those terrible pirate impressions when everyone has had a drink.

This has a fun ‘pongo bongo’ design which has the usual slots for the cups as well as additional slots in each corner. It has tethers so that it can be anchored and can be turned over and used as a relaxing floating mattress. It has a high-quality vinyl construction for durability, so you know that it’s not going to break easily. 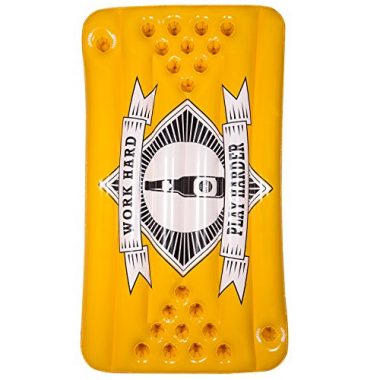 This beer bong table comes with a humorous ‘set sail, and drink ale’ logo and sets the scene for hours of fun. It only has two additional slots, however, which is less than most. It includes repair stickers should the worst happen and comes with a 30-day money back guarantee. The logo will set the scene for a party of plenty of drink, and plenty of laughs. 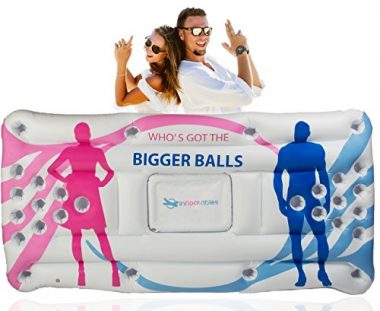 This is a floating beer pong table which pits men against women and asks on the raft ‘who’s got the bigger balls’. It has 8 additional slots available, with a cooler section in the middle for your drinks. It’s a large table which can be doubled up as a relaxing lounger. It includes 6 balls as well as patch kits for easy repair of your beer pong table.

This able has just two additional slots available for drinks with the usual slots for cups. Many users state that it can lose air quickly, but is fairly easy to inflate. It is lightweight and can move around easily in the water, but is very portable and easy to use. It is made out of thick plastic so it’s not going to break very easily.

There are some great beer pong inflatable rafts out there and they will give you hours of fun playing the game that has provided so much entertainment over the years, but it’s even better when you get to play it in the water.

These are the top rated floating beer pong tables on the market and each has different features and design points that could appeal to different people. A lot of that comes down to where you are going to use it, but most times it will be in a pool. If you’re in open water, then you’ll probably want to be able to have tethering points so you can either tie it up or anchor it.

Having a cooler slot in the middle can be a great help, and some of the best beer pong pool floats have that option. Also, some come with a lot more extra drink holders than others, but all of the models we reviewed come with the standard 10 slots for the game.

If you’re looking for a blow up beer pong for the pool, then you may want to consider having a table that can be used as a relaxing float for those times where you’re not having a party. If you have one of these floats then you’re instantly going to make your party into a memorable one.

Playing beer pong is a huge amount of fun and a great way to spend a few hours in an evening before you get too drunk that you can’t even throw! Playing beer pong in a pool though will create the kind of memories you’ll never forget. So choose the best floating beer pong table for you and start practicing your aim! 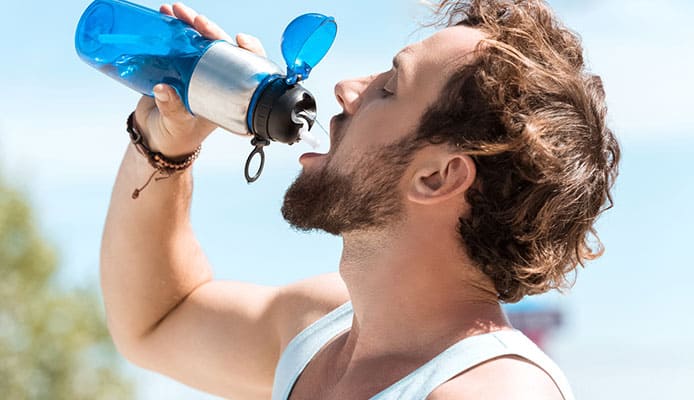 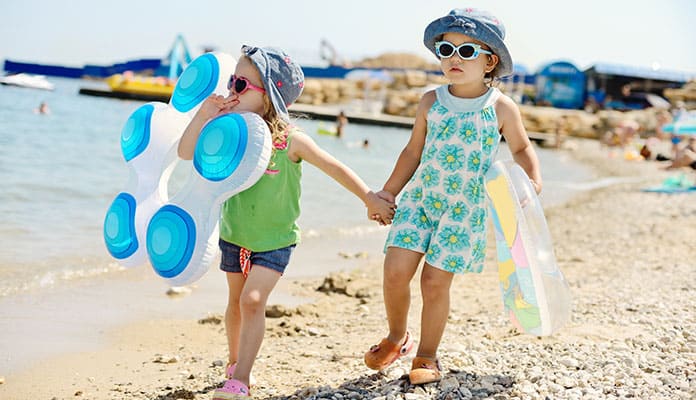 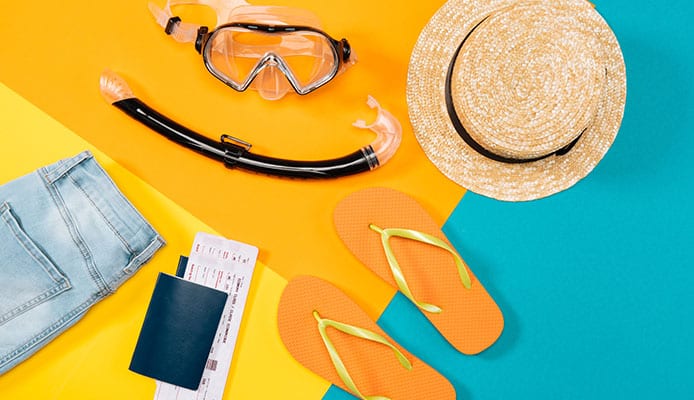