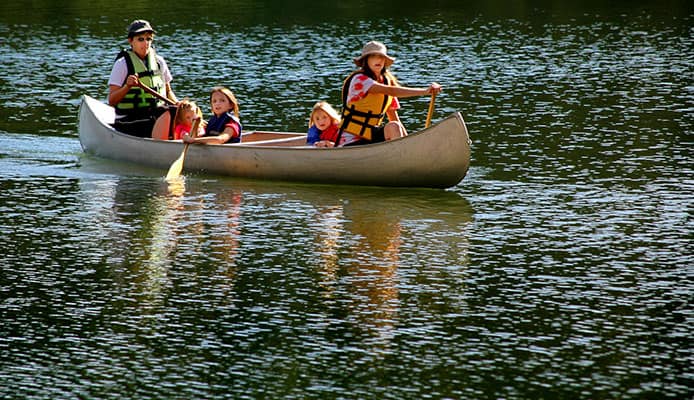 As the summer is drawing near, you’d probably love to have as many fun ideas floating around as possible. It is also a great opportunity to learn something new and healthy like kayaking or canoeing is. While recreational kayaking is most definitely a great exercise for overall body health, thinking about endless paddling doesn’t look so attractive at first.

That is why it is great to learn something about the most popular canoe games and kayaking games so when the time comes you’ll learn how to paddle properly while having a great time with your friends and having tons of laughter will make you want to come back for more and it is without a doubt the best way to start falling in love with this amazing activity that will keep both your mind and body healthy and in a good shape.

In this article you’ll read about six mostly used canoe games, and later we’ll be through some other kayaking games and activities you could do, besides these six we’ll be talking about here.

If your canoe gang counts five, this is the perfect number for a game called Race to a dozen. You’ll need two canoes, one whistle, and two balls that could float.

Form two teams with two players and each team should have one ball with them.  The rules are simple – complete the task given by the taskmaster as quickly and possible.

When the taskmaster tells what the challenge is, he or she has to blow the whistle. Once the whistle is blown, both teams rush to fulfill it. Whoever finishes first gets one point. The winner is the team with 12 points.

Some ideas for tasks can be:

Most of these tasks will help you learn how to maintain balance while in the canoe, but you’ll also learn how to get out of the canoe and how to climb back in. Also, it is useful because you’ll be mastering the paddling part and learning how it works.

One of the best two-player–one canoe games with the simple goal – make your opponent swim! This means you’ll most likely get wet fairly quickly, especially if you’re just a beginner.

Both players are standing so they face each other, balancing on the gunwales, one at the bow and the second one at the stern. Then they start to wiggle, bob, basically do anything that will make the canoe moving and bobbing. Who falls into the water first, loses! You can make up additional rules, like awarding a point for every win and playing until you collect five or ten. The nearer to the end of the canoe you are, the harder it will be to maintain the balance.

As you can see, this game is great for a few quite useful skills when it comes to canoeing and kayaking: 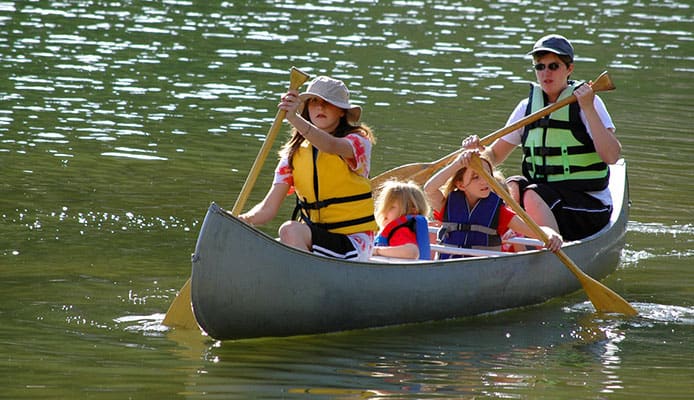 If there are three solo paddlers or six tandem paddlers, this is the best choice. Besides three canoes – whether it is the best canoe for a single user or a tandem kayak – you’ll need a full roll of duct tape.

Start by setting the boundaries and play area – you may use any object for this. Now take the duct tape, cut two-foot-long pieces, and give it to each canoe. Fold it so about four inches of the adhesive side is exposed.

Stick the tape to both bow and the stern side of each canoe. The game moderator, who should also have a whistle, spreads the teams and gives the sign when the game starts.

The goal is quite simple in theory – get the most duct tapes from the other boats. Although it sounds quite easy, it is really challenging to do it while you’re moving.

This canoe game is great for learning how to properly maneuver your vessel, and it will also help you learn how to move your body while in it so you don’t end up capsizing once you’re out in the waters, paddling.

The game ends when the moderator gives the sign, or when the last part of the tape is removed.

This one is the best choice for parties with a large number of participants, and the minimum number is eight, but it is not recommended to play it with more than 10 players for each team. From the kayaking accessories and canoeing equipment, you’ll need at least four vessels, one floating Frisbee or a ball, and one whistle from your safety kit.

Where To Sit In A Canoe?

To set up the game, you’ll need to set up the boundaries – buoys, docks, anything will do, and that will help you create the field similar to the football field. End zones should be about 30 meters apart.

The players should be divided into two teams and the same as with football – your goal is to pass the ball into the other team’s end zone.

The game starts with both teams paddling from their end zone to the middle of the field to pick up the ball. When a player has the ball, he can make five strokes before passing the ball further. The receiver has to catch it from the inside of the boat. If the ball is dropped, it goes to the opponent to continue.

When the goal is scored, one point is awarded, and the other team starts from the middle. Who reaches 10 points first, wins.

If the group is really big, playing Clown is a great choice. All you need is one canoe and an incredible sense of balance. The goal is to have as many players on board as possible. The trick is to climb the canoe from the water, while the other “teammates” try to balance the boat. You may also try a competitive version by spreading two teams and who has more people wins, or who does it faster. Or simply fool around and get onto it.

The only game that is not played in the water, the same as with Clowns, doesn’t have any restrictions and anyone who wants can participate. The only thing you’ll need is a paddle for each player.

For this game, you’ll have to form a circle and place the rest of the blade on the ground, while the butt ends are held at arm’s length in front. When the moderator tells a command – like “one to the right”, the players must let their paddle free and move to the said direction to catch the falling paddle before it hits the ground. If it hits the ground, both the holder and the catcher are eliminated, until there is a winner. If there are two players remained, then they have to catch their own paddle, but after performing one spin, if they manage to do it, two, and so on, until someone wins.

Some other fun canoe games and kayak games are:

These activities are great for learning proper kayaking and canoeing techniques, while also keeping the learning process fun. If you have some of your own, feel free to try it out. As long as it is creative, fun, and safe, it is great!