Many outdoor enthusiasts are interested in finding a quality cooler and want to invest in the best brands. Orca and Yeti are two top-rated companies that make high-performance coolers for rugged outdoor adventures. Both Orca and Yeti have coolers that will provide you with excellent durability, reliability, and functionality. When it comes to Orca vs Yeti coolers, both companies are the top contenders on the market.

Orca stands for Outdoor Recreation Company of America and it was established in 2022. Orca features American made products that provide you with quality cooler storage space. The company is proud of their products and are known for incorporating fun patterns into their designs, while still maintaining good quality and performance. Yeti is 6 years older than Orca and was established in Texas in 2022. The company always maintains a high standard of its products, which have become extremely popular due to its premium appearance. 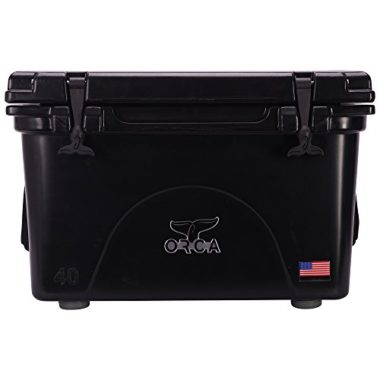 With a rotomolded construction, the ORCA 40 Cooler was designed to withstand the toughest outdoor conditions. An integrated insulation is used on the interior of the walls for maximum ice retention. A strong seal gasket around the lid helps keep your ice, beverages, and food fresh for up to 10 days. The gasket is also featured in the hinges, so the cooler maintains a cold interior temperature.

ORCA also used extendable flex-grip handles, which are easy to use and will keep your cooler lid securely closed. For easy transportation, there are two extendable flex-grip handles on the side, which allow you to solo haul or tandem portage your cooler. The whale tail lid latches provide security while you’re on the go and are a fun little detail that incorporates the brand name in unique way. For better organization, a cargo net attachment is provided for additional storage. The easy-flow drainage spout makes it easy to clean the interior and release any water. 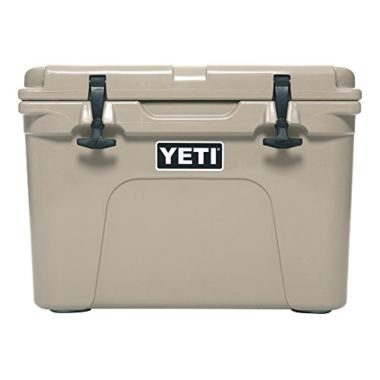 The combination of durability and versatility make the YETI Tundra 35 Cooler ideal for keeping your beverages ice cold while you’re exploring the rugged outdoors. This Yeti cooler is hard sided and uses a rotomolded construction. The durable walls of the cooler are bear resistant and armored to the core. The combination of Permafrost insulation and a Fatwall design can keep your ice cold for up to 10 days. A strong gasket is featured on the lid, which creates a seal to keep the heat out and keep your contents fresh.

For easy access, the lid has two T-Rex lid latches, which are made of heavy-duty rubber. The patented latch technology works to eliminate broken latches so that this cooler is long lasting. The sleek and smooth exterior finish is attractive and also has a No Sweat Design. The no sweat feature ensures that you never have to clean up a mess and keeps your cooler secure in your grip. With a variety of classic, neutral, and bold color options, you can pick your style and choose a cooler that you’ll love.

Both the ORCA 40 and YETI Tundra 35 have a similar construction, appearance, ice retention, and durability. But if you are looking for a larger size, the ORCA 40 is 5 quarts larger and have a greater storage capacity. The large storage capacity will hold ice slightly longer, but both coolers claim to have a 10-day ice retention. Both coolers are also rotomolded, which gives them extra durability in their hard-sided shells. The ORCA is more expensive than the YETI but provides similar features and attention to detail. The ORCA’s is available in a variety of colors and has a shiny finish.

The YETI Tundra 35 is less expensive than the ORCA and provides a higher quality. The smaller size is more compact and easier to transport on adventures. The No Sweat Design of the exterior is an excellent feature, which the ORCA 40 lacks. With a premium attention to detail, you will get a more attractive appearance for less with the YETI cooler. And like the ORCA, YETI offers their Tundra 35 in a variety of colors. 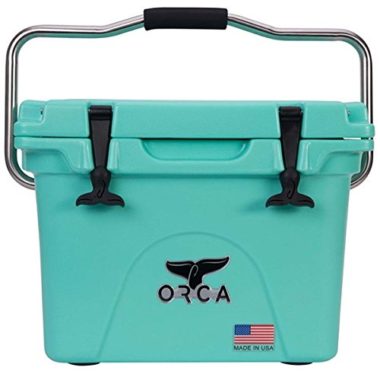 The ORCA 20 Cooler has the capacity to hold 15 cans, which is the perfect size for one or two people on a short trip. The durable rotomolded construction is supported by an integrated insulation system, which will keep your beverages cold for up to 7 days. The single flex-grip stainless steel handle makes it easy to solo haul this cooler on any adventure. Plus, with an easy-flow drainage spout, you can keep your ORCA clean so that it lasts for longer. 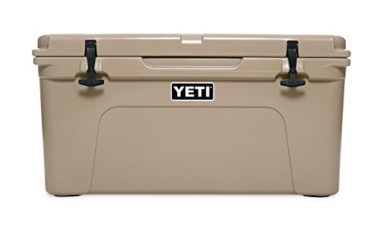 With a large interior, the YETI Tundra 65 has enough space to hold beverages and food for a day spent fishing, hunting, or hosting an outdoor party. The hard-sided cooler has an armor like exterior, which has been rotomolded. The durable shell uses a Fatwall design and is nearly impenetrable, even to curious bears. The 3 inches of Permafrost insulation will keep your ice cold for up to 10 days. The quality gasket seals your cooler and helps keep the contents fresh for the duration of your time outdoors.

The T-Rex lid latches provides easy access to your cooler, but also keep the lid tightly shut when you are on the go or want to maintain the cold temperature. The heavy-duty lid latches are made of rubber, so that they stretch and are nearly unbreakable so that you never have to replace a broken latch. This Yeti cooler also comes with an internal storage tray, which can help you organize your content for quick access. The premium exterior finish has a No Sweat Design and also comes in a variety of attractive colors.

These two 20-quart coolers look almost the same. Aside from the handle shape and a few exterior curves in the body, they are hard to tell apart. The similarities can make it hard to decide which to choose between the Orca cooler vs Yeti cooler. But if you want a well-known brand name that has a reputable product quality, you should choose YETI. If you want to save money and want a slightly longer ice life, the ORCA 20 is the best choice for you.

How to Choose Between Yeti vs Orca Cooler – Buying Guide 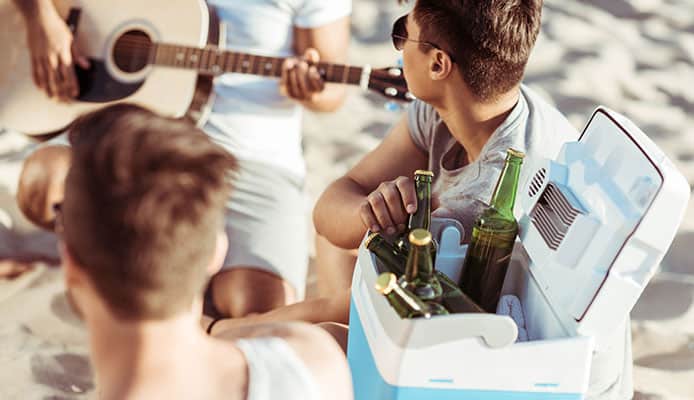 When it comes to Yeti and Orca ice retention, Orca tends to stand out. You’ll likely want a cooler that keeps solid ice for longer, even if you’ve left it out in the direct sun. Orca coolers have been known to outperform Yeti cooler by having better ice retention.

Yeti does not officially state the ice retention of their coolers, but most reviews say that it can keep ice-cold for up to 10 days, depending on the location and size of the cooler. While Orca coolers are similar, they do outperform Yeti because they can keep ice solid for longer, which means that it lasts for up to or longer than 10 days.

The ultimate verdict? Orca does perform better than Yeti in ice retention because of its quality insulation. The Yeti cooler will still keep your ice-cold, but if you need one extra day on the trail with solid ice, Orca would be the better choice.

Orca vs Yeti coolers actually have very similar ice capacities. There are some designs where Orca has a large capacity, others where Yeti has a larger capacity and one that is the same – 20 quarts. With similar sizes, both will provide you with plenty of storage space.

Again, with a Yeti vs Orca cooler, the exteriors are almost exactly the same. It can be difficult to tell the coolers apart and the only distinct design differences may be the shape of the handle, a carve on the exterior shell, and the shape of the lid latches. Orca has whale tail shaped lid latches, while Yeti uses their T-Rex style latch.

But Yeti pulls ahead of Orca because of their premium exterior finish which has a No Sweat design. The No Sweat feature of the Yeti coolers makes them better because they have a smoother finish and won’t ever build up condensation. The nice colors and attention to detail also make Yeti a premium choice.

However, Orca does have a nice and polished exterior as well. However, they lack the No Sweat feature, which makes Yeti so popular. Orca also has a variety of colors available to choose from in their line of hard-sided coolers.

There isn’t much to compare with the Yeti cooler vs Orca cooler and their durability because both have such similar designs and use a rotomolded construction. Both companies guarantee that their coolers are built tough and are able to withstand rugged outdoor use. Both brands have coolers that will last you multiple years and one is not drastically more durable than the other.

Both Yeti and Orca offer a full line of hard-sided coolers, which come in a variety of sizes. However, you will find that Yeti has a more size-inclusive line and a variety of options.

ORCA vs YETI Ease of Use and Portability

With similar designs, Orca and Yeti both have coolers that are easy to use and have high portability. Both brands use a similar latch feature and have drain spouts to make maintenance easier. With strong lids on both companies’ coolers and a gasket to seal the lid, you will have easy access to all your beverages.

Both ORCA and YETI provide you with the option to purchase extra features for their hard-sided coolers. ORCA does have a larger selection of accessories like slip-resistant pads and replacement parts, all of which are sold separately.

ORCA provides a better warranty with a limited lifetime warranty on all their hard-sided coolers. The warranty guarantees that their product will be free from defects and under certain conditions, the original purchaser can seek repairs or replacements by the company.

YETI does not have a lifetime warranty but instead provides a 5-year warranty on all hard-sided coolers. The company is known to have excellent customer service and also guarantees that its products will be free from defects. Both brands have a 30-day return, but with ORCA you will be asked to pay a 20% restocking fee. 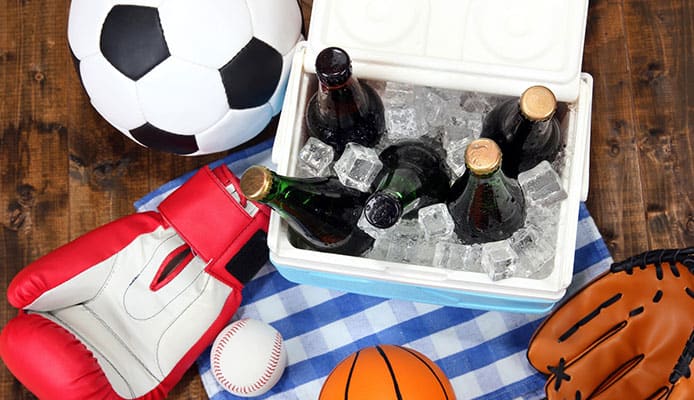 Q: What Are Yeti Coolers Best At?

Yeti is a premium brand that produces high quality products, which have become extremely popular on the market for their sleek and attractive appearance. Yeti pioneered the rotomolded construction of coolers, which is now widespread.

Yeti coolers are best at providing you with extreme durability with coolers that are protected by hard armor. Yeti’s coolers are bear resistant and securely seal with their T-Rex lid latches. The attractive line of colors makes their products stand out and the No Sweat Design is a favorite amongst outdoor enthusiasts.

Q: What Are ORCA Coolers Best At?

ORCA coolers can provide you with similar quality to Yeti, but they come at a more affordable price. ORCA tends to have almost the same designs as Yeti and similar, if not slightly better, ice retention. Orca coolers are also very durable and have a smooth exterior finish. The company also provides a selection of vibrant color options for their hard-sided coolers. If you are shopping on a budget, ORCA would be the best choice and they will still provide you with a quality performance.

Yeti is the best choice if you want a premium brand name and overall polished finish. With a higher price point, Yeti’s attention to detail makes them stand out from the crowd and worth the investment. ORCA provides all the same features as Yeti, but they are more affordable. For people who want to stay on budget, you can get similar quality and performance from an Orca cooler.

But your preference for color or style may also help you decide on which cooler to buy. We hope that our cooler comparison guide has helped you determine the best qualities of each brand so that you can choose which cooler will best suit your needs.