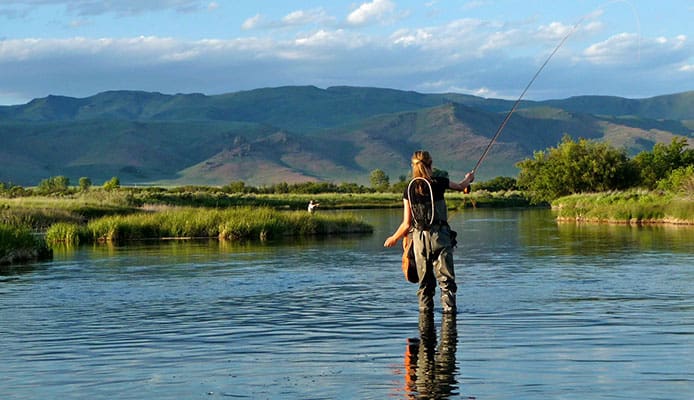 People who are just getting started with fishing mostly start out using a standard spinning reel and rod. This is because this is one of the easiest setups to use and is effective in a variety of fishing conditions. Despite that, there is still some learning curve involved when it comes to learning how to cast a spinning reel. Don’t worry though because it isn’t that difficult at all as can be seen below.

Before anything else, you first need to set up your fishing gear. To do that, you’ll need the following:

Once you have all your gear ready, it’s time to set up your spinning tackle. To do this, follow the steps outlined below.

3. Use a Practice Plug

As mentioned earlier, you may want to start practicing how to cast a spinning reel and rod using a practice plug first which you can do in your backyard or the driveway. The reason why you shouldn’t use your lure at this point is that you don’t want to damage them as they hit the ground. Also, hooks may get snagged in the trees or bushes in your backyard and driveway. Practice plugs are also a great way for you to practice tying your knots.

There are two common ways that anglers use when setting the drag. The first one is with the use of a scale, either a fishing spring scale or a fishing digital scale. This method is considered to be a more accurate method of the two. The second method is setting the drag by ‘feel’ or without the aid of another instrument such as a scale. Many anglers do this, though it can take a whole lot of experience and knowledge before can get the ‘feel’ right. That said, beginning anglers are advised to utilize the first method when setting the drag on their spinning rods. 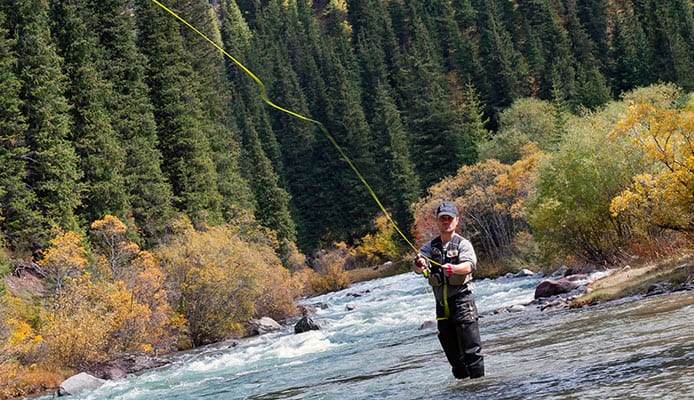 Foot in between Fingers

The most common and traditional way of holding a spinning rod is the foot-in-between-fingers method. As the name suggests, here you’ll be holding the rod with the foot of the spinning reel in between your fingers, usually between the middle and ring finger. However, some prefer to place the foot between other fingers like between the index and middle finger.

In this method, all your fingers are positioned in front of the spinning reel’s foot. This method allows you to have a full and fist-like grip on the rod, which accordingly is the strongest and most natural grip. Some anglers use this method as it appears to be more comfortable than the foot-in-between-fingers method. It also gives them more power in manipulating the rod when muscling a fish.

6. Reel out the Line

Next, reel in (or out as the case may be) your fishing line by turning the handle slowly until you have at least six inches of line dangling from the tip of your fishing rod. Some anglers will say that you can reel out up to twelve inches of the line if that feels more natural for you.

Once you have reeled the desired length for your line at the end of your rod, grab the line with the crook of your rod hand’s index finger and press it against the rod’s handle. Using your other hand, open the bail on the spinning reel.

Afterward, align your spinning rod so that it is parallel to the ground and then point it towards your target. Then, in one smooth motion bring the rod up until it is almost vertical to the ground. Allow the tip to flex or bend a little as it goes up and push it forward without pausing. An important note to remember is that all the rod’s movement should be manipulated by your hands and not your shoulders.

When the rod (from the vertical position or 12 o’clock position), goes to the 2 o’clock position let go of the line you have tucked in your rod hand’s index finger. This will send the line and lure flying from your spinning rod, and hopefully towards your target. This is probably the most challenging part of the cast, and many beginning anglers usually have trouble when it comes to finding the correct timing for releasing their index fingers. However, this is nothing that practice and experience can’t cure.

One problem that many beginning anglers encounter at this point is that their lures or practice plug goes straight up into the air, which usually happens when you release the line too early. Another problem is having the lure or plug come crashing at their feet, which happens when the line is released too late.

To reel in the line, close the bail first and then place the line in the roller. Then, turn the handle to pull the line back towards you. Anglers have their own styles when it comes to reeling in their lines. Some do it slowly and carefully, while others do it rather quickly. Others reel in their lines at a constant speed while others jerk the bait in at fast and slow intervals. All these methods are actually effective in their own rights, and you’ll want to find the most effective method which works for your fishing style and requirements.

Reading about how to cast or how to use a spinning reel can only get you so far. Thus, after reading and studying, you still need to get out there and start practicing. Only with actual practice (and patience) will you be able to learn how to cast a spinning rod easily and perfect your casting technique.

Learning how to cast a spinning reel and rod isn’t that difficult provided you’re willing to put in the time and effort required. It may take you several attempts to get it right, but all these will be worth it when you see your lures landing on your target areas.