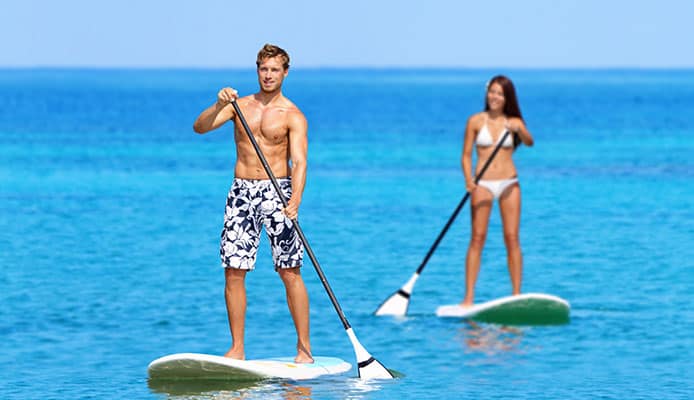 When you take a look at the standup paddleboard for the first time, there really isn’t anything impressive in terms of the SUP design. It’s just a long, curved board with a fin at the bottom. In fact, you could say that there is not much difference between the paddleboard and the surfboard and indeed, most of their parts are similar.

However, there are a few more structural designs to the standup paddleboard that sets it apart from the surfboard. SUPs will also come with extra accessories depending on the activity or purpose of using them. Think of fishing on a SUP for example. You will need extra SUP fishing accessories to make it successful.  This list takes a look at all the main paddleboard parts. Let’s begin!

The nose is simply the front of the standup paddleboard. It can also be referred to plainly as the tip. This is the curved section of the paddleboard. Unlike a canoe or a kayak, the nose of the SUP is not called a bow.

The back end of the paddleboard is known as the tail and is often 12 inches from the tip of the back. Its design is very much similar to that of a surfboard. Standup paddleboards that are designed for sharper and quicker changes in direction feature a rounder tail while a wide tail is ideal for a more aggressive turning.

The top of the stand-up paddleboard where you will be standing is called the deck. Different boards will feature different deck designs. Some have a curved surface while others will feature a more contoured deck.

It’s unoriginal of course, but there is really no better word to describe it. The bottom, of the standup paddleboard, can be flat which adds to the stability of the SUP while others are convex. It is easier for convex SUPs to turn but the design also makes them less stable.

The fins of the standup paddleboards are located at the bottom of the board. Just like on surfboards the SUP can have one, two, or three fins. They bolt inside a hole called the fin box.

Fins help to add stability to the standup paddleboard. They also allow the board to move in a straight path without too much tilting to the side.

The curvature or angle from the tip of the nose to the tip of the tail is the paddleboard part known as the rocker. Its significance is most apparent when surfing and not so much when gliding over calm water.

These SUP parts are the edges or sides of the standup paddleboard. SUPs that have a dome deck have smaller rails. This makes it easier for the user to rock from one side to the next.  On the other hand, SUPs that feature a flat deck have more rails which in turn makes them more stable. 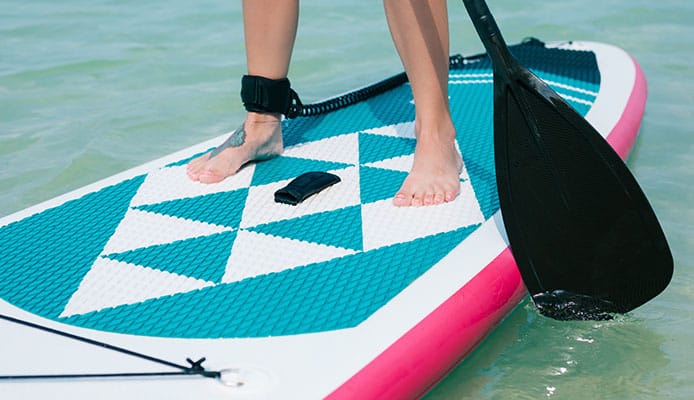 On top of the deck is a pad that is made from foam or rubber. It is meant to add extra cushioning as well as provide traction. The deck pad is an important SUP part since users will be on their feet for extended periods. A hard deck that lacks traction will not only be uncomfortable but could also cause the user to fall.

The paddleboard leash is similar to that found on the surfboard. It attaches to the user’s ankle and the back of the SUP. In case the user falls into the water, they can access their SUP as it doesn’t drift too far under the current.

The leash attaches on the other end to the leash cup.

Stand up paddleboards are not like the surfboards where you can just hold one under the arm and run to the ocean. They feature a wide design. Due to this, there are special groves on the surface of the decks that allow for easy carry.

Standup paddleboards will often feature vents. These are holes on the surface that are sealed off using vent plugs. The foam construction of the SUP means that during hot temperatures, the air inside the SUP can expand. Over time the constant expansion and construction could damage the structural integrity of the SUP. Opening the vents thus allows the excess air to come out.

The standup paddleboard layup makes up the outer shell and is situated above the core. The Layup is usually created from carbon, fiberglass, Kevlar, ABS sheet, or bamboo. The majority of the SUP layup, however, will be made from fiberglass.

You will not need a board bag for the usual plastic and foam stand up paddleboard. But if you are one for the inflatable paddleboard, then you will need a good SUP paddle bag to transport the board to wherever you need to use it.

You cannot enjoy the paddleboard without the SUP paddle. It features 3 main parts which include the handle, the shaft, and the blade.

The handle of the SUP paddle can either feature a T-design or a more ergonomic design. The ergonomic handle is more comfortable which makes it popular. However, there are still plenty of people who prefer the T-style paddle.

SUP paddle shaft is the middle section of the paddle and many believe this to be the most important part. It can be constructed from either carbon, glass fiber, Kevlar, and at times aluminum.

The blade is the part that gets into the water and provides the power to gain propulsion. Blades come in different sizes. Larger blades can provide more propulsion as they displace more water and vice versa.

Understanding all the different paddleboard parts and SUP accessories will help you make the best choice when selecting your SUP.  For example, if you have an inflatable SUP, then you will need a SUP electric pump to go with it. What’s more, by knowing how the different parts integrate and function, you can maintain the SUP in the best condition for a long time to come.