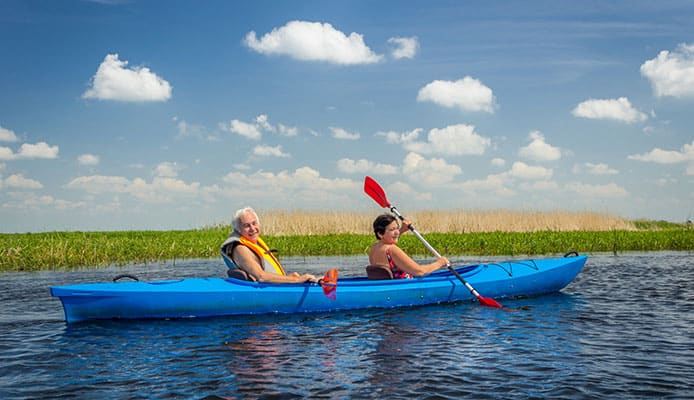 Unless the two paddlers can time their forward strokes properly, the kayak will zigzag all over the water and their paddles will keep crashing. The good news is that a two-person kayak is pretty easy to propel and maneuver once you master the tandem kayak paddling technique. In this article, you will learn how to paddle a tandem kayak efficiently and how to turn it with ease.

How To Get On A Double Kayak

For ease of getting in and launching a tandem kayak, you should put the kayak on the water with the rear closer to the shore. The paddler taking the front seat should get on the kayak first. Once the front paddler is on the kayak, the rear paddler can now board the kayak. This is because the paddler at the rear is in the best position to push and maneuver the kayak into the water.

How To Paddle A Two Person Kayak

The most important thing about the tandem kayak paddling technique is to make sure that the forward strokes are coordinated. Not only is paddling in unison the most efficient way to propel a tandem kayak forward and ensure it doesn’t zigzag all over the water, but it’s also the best way to ensure your paddles won’t cross or smack on each other.

Due to the proximity of the paddlers in a double kayak, it’s easy to bump paddles if you don’t time your strokes properly. Once you’ve mastered the synchronized tandem kayak paddling technique, you will find that your kayak glides in a straight line and your paddles won’t crash. Here is how to tandem kayak efficiently by timing your strokes.

Let The Paddler in the Front Set The Pace and Rhythm

When paddling a tandem kayak, it’s the paddler in the front seat who should set the paddling pace and rhythm for the other paddler to follow. This means that the kayaker in the front has it relatively easy – all he or she has to do is paddle freely.

For a smooth tandem kayaking experience, the back paddler should do his or her best to match the strokes the first paddler uses. If you’re the one on the rear seat, this shouldn’t be too difficult as you will have a full view of what the paddler at the bow is doing. All you have to do is pay attention and copy their paddling technique.

How To Turn A Tandem Kayak

If your tandem kayak is equipped with a rudder, it won’t have a problem tracking straight and you will find it easy to make slight corrections. Actively turning a stationery kayak, however, is a job best done by the paddler in the back seat.

While still maintaining the rhythm set by the front paddler, the paddler in the rear seat should make a more powerful forward sweep on the side opposite the direction you wish to steer the kayak. For example, an exaggerated stroke on the right side will steer the kayak to the left.

You might also be interested in: What Is A Kayak Wet Exit And Entry And How To Properly Do It?

The Back Paddler Should Perform A Backstroke

The Stronger Paddler Should Take The Back Seat 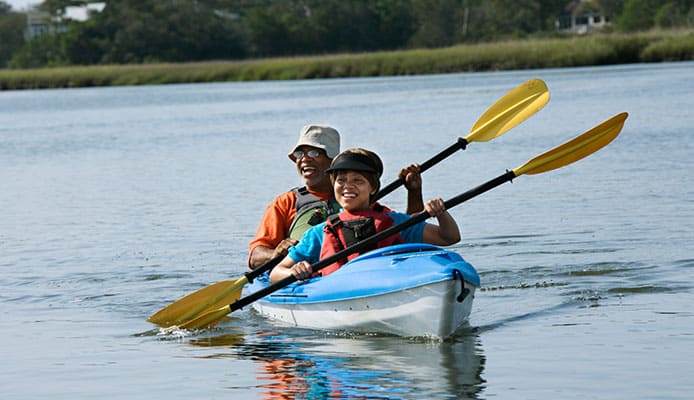 As you can see, the paddler in the stern has more control over the kayak and is responsible for ensuring the tandem kayak goes in the right direction. And, if the paddler in the front gets tired and needs to take a break from paddling, the stronger paddler will still have sufficient control to paddle the kayak on their own.

It’s only natural then that the paddler at the back should be the stronger of the two. In particular, strong back muscles are needed for the tandem kayak paddling technique. If you want to become a stronger and more efficient paddler, we recommend that you perform exercises to strengthen your back muscles.

Tandem kayaking for beginners can be a very frustrating experience, more so when it’s the very first time you are kayaking with a partner. On your first trips together, you won’t understand each other’s strengths and weaknesses well enough and won’t have learned to synchronize your strokes.

If the kayak goes in the wrong direction, you won’t be completely sure whether that is your fault or your partner’s. This is why being patient with each other is crucial. With practice, you will eventually learn how to paddle a tandem kayak in unison.

Being out in the water in a solo kayak is fun, but everything is better when you have a partner. Kayaking experiences are far better when they are shared and a partner can help you better deal with an emergency. So what’s a tandem kayak without a companion? Incomplete! Don’t let the fear that paddling the kayak together will be hard to stop you.

As you can see from our guide on how to paddle a tandem kayak, paddling a tandem kayak is very easy as long as you assign each other the right seats and can coordinate your forward strokes. Timing your strokes will prevent paddle collisions and get the kayak to go straight instead of being all over the water. This will ensure you make the most of your double kayaking experiences.