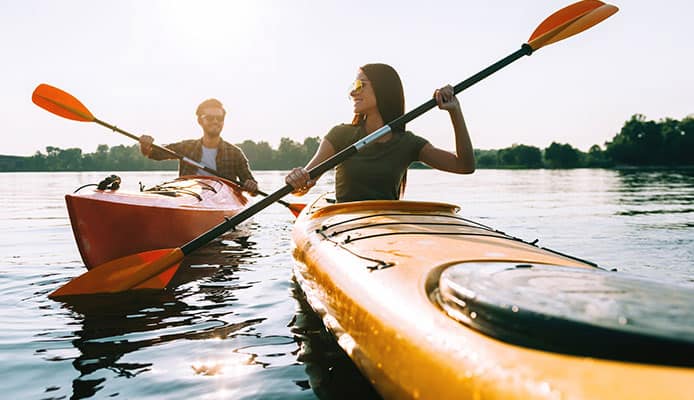 The stern rudder is one of the essential steering strokes that you must know how to do as you learn how to kayak. It is a technique that will allow you to steer the kayak in its desired direction, providing total control of its movement. This will especially be useful when you are using a surf kayak.

Now, let us get started, and allow us to teach you how to stern rudder. Like the other turning techniques that you will master, there is a possible drag. So, be as careful as possible to avoid affecting your momentum or speed.

What is a Rudder

Before we start, let us first talk about what exactly is a rudder.

The rudder is one of the parts of a kayak, specifically found in the more recent designs. It is a long blade that looks like a fin. It is connected to the end of the stern (the back part of the kayak) and will extend all the way to the water. It is essential for steering the kayak.

How to Stern Rudder

Ready to master the stern rudder technique? Below are the steps to do it right.

When To Do It

The stern rudder is not appropriate in all instances. Knowing when to do it is critical to do it effectively.

The stern rudder is often done when surf kayaking or whitewater kayaking. While it is a common technique for changing direction, you can also use it to maintain the same direction while the kayak is on the move.

In terms of environmental conditions, this is best done when water current, waves, and wind try to take over.

In sum, the stern rudder is an effective way to steer the direction of your kayak. If you do this properly following the steps mentioned above, you can effectively turn your kayak even without the help of a rudder. It is a turning strategy that is effective only when your kayak is on the move.

Now that you know how to stern rudder, to be a pro, take the time to learn other important skills, such as the low brace turn and the sculling draw, both of which will help propel your movement on the water.