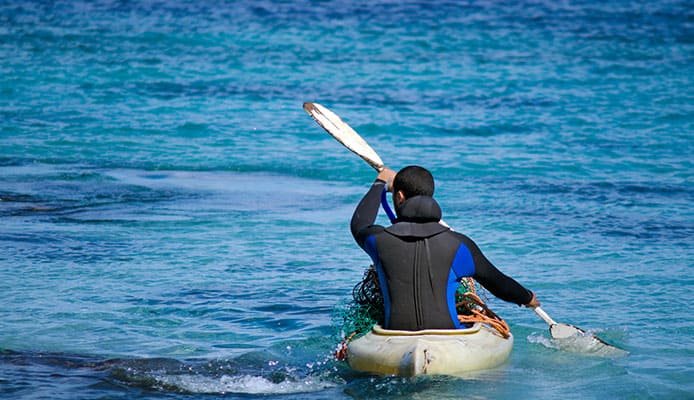 Capsizing is inevitable when kayaking. It happens even to experienced kayakers, and it can be frustrating. More than the presence of mind, you need to master basic techniques, such as the wet exit and entry. To properly get back into your kayak after the capsize, you also need to learn how to do a kayak T rescue, which is exactly what we will teach you in the rest of this post.

Ready to up your kayaking skills and learn something new? Read on and learn from the insights we will be sharing!

What is a Kayak T-Rescue?

Basically, it is a two-person method of dealing with a capsize. The basic requirement is that there should be one person in the kayak to help the one who is in the water. As you know, it is always better to go kayaking with a buddy to ensure that there will be someone to extend a helping hand when you need one, such as in a situation when a kayak flips.

How to Do a Kayak T-Rescue

Regardless if you are using a touring kayak, recreational kayak, inflatable kayak, or any other types of kayaks, the steps involved will be basically the same. Below are the easy steps to successfully carry out the kayak T rescue.

When the kayak flips, the first thing that needs to be done is to capture the attention of the rescuer. Shout, whistle, or do whatever it takes to call your paddling partner or someone in the water who can help.

The rescuer will paddle all the way to the person who will be rescued until the kayak will be perpendicular. This is when a T position will be formed.

Before even saving the person on the water, who will be referred to as the swimmer in this guide, the first thing to do is to right the kayak that has overturned. The goal is to get rid of the water in the kayak and get it to an upright position.

The swimmer will go all the way to the back of the flipped kayak. The rescuer, on the other hand, will lift the other end of the kayak until it reaches the lap. The two people holding the kayak will rock it left and right, which will help to drain the water. Once it has no more water, it will be turned.

This step is important for the kayak to stabilize in the water. The rescuer paddles all the way to the now overturned kayak until the two are in a parallel position. The bow of the rescuer’s kayak should be aligned to the stern of the other one.

Now that the boat has been overturned and is already in a stable position, the next thing to do is to allow the swimmer to get out of the water and sit in the cockpit again.

To do this, the swimmer will first reach the static deck lines or the coaming if it is nearer. Kick the legs with as much energy as possible while pulling the arms at the same time. Stay as low as possible for balance.

The swimmer will then lift a leg out of the water and position it on the cockpit. This is done while maintaining a firm grip of the kayak, which will make it stable on the water. With the hips now in the kayak, the swimmer will turn until comfortably positioned on the kayak seat.

While crawling on the stomach is the standard way to get back to the boat, it can be done differently by hanging the arms in between the two kayaks. One arm should be in the rescuer’s boat while the other should be behind the cockpit of the swimmer’s kayak.

Lifting using the two arms is a faster method for kayak rescue, although, it will require strength to be able to lift the body off the water relying on the power of the arms. Plus, this can be more challenging when the water is rough or when the kayak is unstable.

During the entire time, the rescuer should be holding the boat and helping to keep it stable. If the boat moves a lot, it will be more difficult to get back into the cockpit. If possible, pull it over on the side of the body of water that is more stable.

In sum, learning how to do a kayak T rescue is an important skill for kayaking safety. As mentioned above, performing a kayak T rescue successfully can be broken down into five steps – asking for help, assuming the T-position, getting the kayak in an upright position, making the kayak stable, and getting back on the kayak.

Just like the kayak X rescue, mastering the techniques above will make it easy to get back on the kayak after capsizing. If you are acting as the rescuer, on the other hand, this will allow you to be a savior to a fellow who is in need.