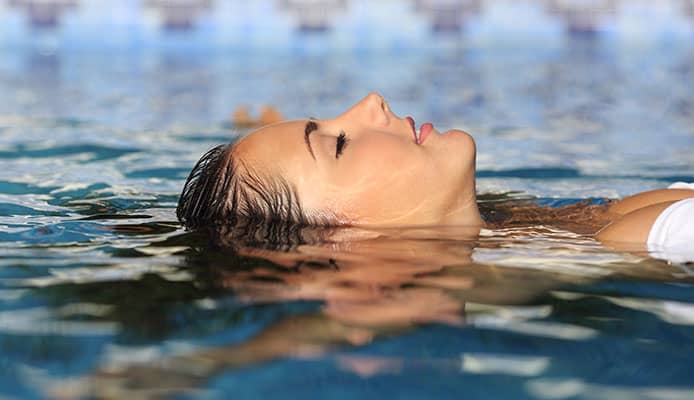 For non-swimmers, the ability to swim fast and perform various swimming strokes with relative ease is certainly something to be envious about, and watching swimmers floating and gliding effortlessly around the pool is something most people wish they could do. Floating in water may not appear to be much, but it is a very important skill to master as it can help save your life and prevent you from drowning.

Top Tips to Help You Float on Water

Given its importance, learning how to float in water is the very first skill taught to new swimmers. If you are just beginning to learn how to swim, or can swim but have difficulty floating, then read on for our top 10 tips on floating as well as for answers to some of the most commonly asked questions about this particular swimming skill.

This is perhaps one of the most difficult parts of learning how to float. Many beginners usually panic at the thought of being in the water, especially since they haven’t yet learned how to swim. However, you must relax your body and mind while floating. For one, it will help you to focus more on implementing techniques to help you stay afloat, and at the same time allow you to breathe properly. Don’t worry about sinking or drowning just yet because the body is more inclined to float than to sink as you will see later on.

It will be much easier for you to learn how to float in water if you have someone to teach you, so consider getting a swimming instructor or coach when possible. You can learn a thing or two from watching other people or even online video tutorials, but nothing beats actual hands-on instruction from a pro. Besides, having an instructor does not only make sure that you learn the technique properly, but it also means that you have someone watching over you as you practice, which then has a psychological effect of making you feel safe and more relaxed.

When it comes to being on the water, whether it’s floating or swimming, most people’s instinct tells them to hold their breath. However, proper breathing techniques are essential when learning how to float and swim. Concerning floating, proper breathing techniques will help you to relax better and this, in turn, will help you to focus more on employing techniques to help you stay afloat. Also, this will allow you to take in more oxygen and let it circulate all over your body to help make you more buoyant and float easier.

4. Practice at the Pool

When you’re still learning to float, it is always best to do so in the confines of a swimming pool since it is the safest and most convenient option. Although it is possible to start learning how to float in the water on a lake or even at the beach, the moving water and waves will make it difficult to focus on the basics with the waves constantly splashing all over your face (even swimming goggles can do so little to help with this). And you don’t even have to go to the deeper end of the pool to practice. Instead, choose a shallow part of the pool where you can stand comfortably, preferably somewhere the water reaches just a little above your hips. 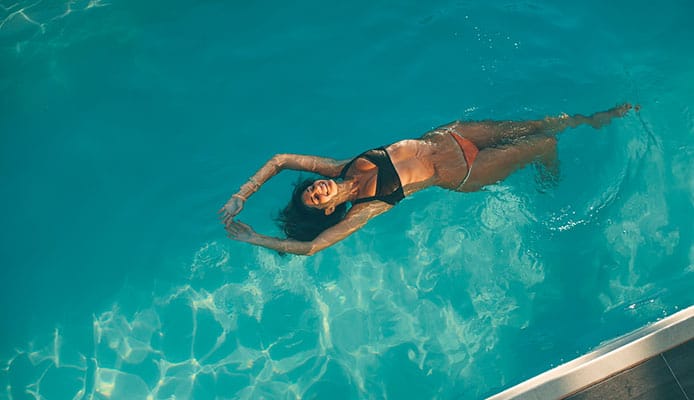 Hand movement is necessary to keep you afloat. Don’t move them too hard though since small motions are more than enough to do the work. Gently moving your hands will help you to keep your face above the water so you can continue to breathe naturally.

6. Keep Your Legs Up

Perhaps one of the more challenging techniques to learn when floating in water is keeping your legs from sinking. However, you can remedy this by reaching your arms above your head. This will allow you to create longer support above your waist and thus give you more leverage to lift your legs towards the surface of the water.

When learning how to float in water, most people will be concerned about their hand and leg movement and even more at keeping their faces above the water. However, it is also important to pay attention to your core muscles as this can help immensely in helping you to float. As a tip, always try to keep your tummy above the water. This will help to lift your legs and keep them from sinking.

Keeping your legs still will cause them to sink and thus pull you under and sink to the bottom. That said, some people think that kicking hard or moving their legs frantically will help to keep them afloat, but this isn’t the case. Instead, kick gently with just enough force to keep you moving slowly. Light and gentle alternating leg movements will be enough to keep them near the water’s surface and your body to stay balanced overall.

Some people often use pool noodles to keep them afloat in the water, especially when they want to do so for an extended period. Floating in water can be exhausting even when you consider that it requires minimal movement than doing swimming strokes like the front crawl or freestyle. Keep in mind though that pool noodles should only be used as floatation aids and should not be relied upon to keep you afloat.

Just like any other skill, continuous and consistent practice is the best way of mastering how to float on water. Again, choose a safe spot where you can practice preferably a swimming pool, a shallow part of a lake, river, or anywhere with calm waters. Start by staying afloat for at least ten seconds first, then gradually work towards staying afloat for a minute or even longer. It will be difficult at first especially when you still haven’t gotten over your initial fear of drowning, but it will become easier as you put in more hours and gain more experience.

Q: Can everyone float in the water?

Yes, everybody can float in the water although some people may find it easier to do so than others. Several factors affect a person’s ability to stay afloat.

For one, there’s the principle of density to be considered, where anything with a higher density than water will sink and anything with a lower or equal density will float. Considering that the human body is composed of roughly two-thirds water, it more probable for anyone to stay afloat than to sink since their body’s density is almost similar to that of water.

But then you also need to consider your body composition like your fat to muscle ratio since this will also have an impact on how easy or difficult it will be for you to float on water. Much of this will have to do with relative density, which we’ll discuss in more detail in a while. But just to give a brief overview, know that having more fat tissues than muscle tissues in your body will make it easier for you to stay afloat.

Your lung capacity will also have an impact on your ability to float. People with a higher lung capacity tend to float better simply because they have a larger pocket of air in their chest (which serves as a built-in inflatable life jacket) that keeps them afloat. Also, having a higher lung capacity means that they breathe in more oxygen which then circulates throughout their bodies. Because oxygen is less dense than water, having more of it inside your body at any given time will make you more buoyant, which obviously will make floating much easier.

Q: Why do I sink when I try to float?

There may be a myriad of reasons why one will sink while trying to float on water. It may be that their body is in the wrong position or perhaps they’re employing the wrong technique. And no, your swimwear like your swim trunks (if you’re a male) or your swimsuit (if you’re a female) has nothing to do with this unless you’re wearing jeans and cotton shirts while swimming (which is highly unlikely).  But in general, the reason why your body sinks while trying to float is based on relative density.

To keep things simple, let’s take a look at fat and muscle tissues. Fat tissues are less dense than water and will float easily on its surface. Think of the oil (from barges, oil rigs, etc.) that spill on the water’s surface and notice how they float instead of mixing with the water. So basically, fat’s density is lesser relative to the density of the water. It’s the other way around for muscle tissues. Muscle tissues have higher density levels relative to water, which means that muscle tissues will sink much faster and will require more effort to float.

Q: How can you float in water without moving?

It was mentioned earlier that you’ll need to keep your hands and legs moving slowly and gently when floating in the water, but some people are capable of staying afloat on their backs while keeping completely still. Nonetheless, it can be a real challenge to do this for an extended period, so in the end, they still need to move their arms and legs to keep them from sinking.

Q: How do you stay afloat in deep water?

One can still float in deep waters by doing the back float and applying the same tips and principles discussed earlier. However, actual swimmers will find it much easier to stay afloat through a technique called treading the water. Just like floating, treading water is an essential skill that all swimmers must learn and master before they go to deeper waters. This technique will allow you to keep your head above the water, preventing you from sinking and potentially drowning.

When treading water, your body will be in an upright or vertical position and you’ll be using your arms and legs to help keep you afloat. The arm movement is called skulling which involves sweeping your arms back and forth, moving them inward and outward to and from your body. You’ll need to keep your wrists still throughout the motion, while at the same time tilting your palms away from your body during the outward stroke and towards your body during the inward stroke. Technically, it will be your forearms (and the power it generates) that will be pushing the water around you.

Your legs will be below you when treading water, unlike the back float where it is almost aligned with your upper body. That being the case, you’ll have to do a flutter kick or move them in a scissor-like motion to help keep your whole body in an upright position. While doing this, you’ll want to avoid bending your knees but you’ll also want to keep your legs flexible and your toes pointed downwards.

Treading water can be a challenging skill to learn and master so you’ll want to start practicing in the confines of a swimming pool. And since you’ll be doing this in the deeper end of a pool, be sure that you have an instructor with you who will not only teach you how to do this properly but also keep an eye on you while you practice.

Floating in water is a crucial skill that every new swimmer must learn. It has the potential to save your life in dire situations out in the water. Learning how to float in water will take some work, but once you get the hang of it, it becomes almost second nature and you’ll be able to keep yourself from sinking to the bottom and potentially drowning.