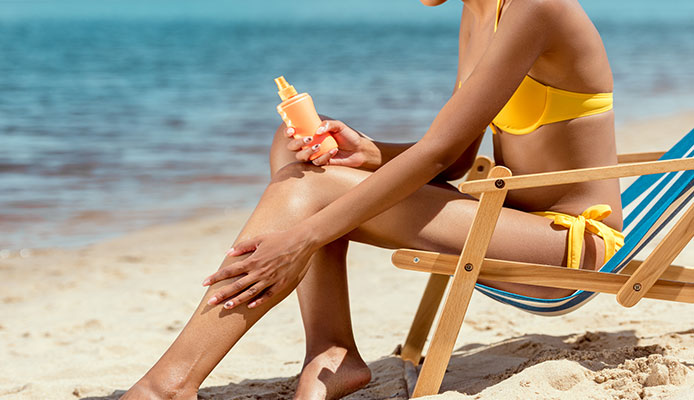 Allowing users to achieve the attractive golden-brown tan much faster, tanning lotions are an ideal alternative to spending hours baking in the sun. However, a common question that most people ask is how does tanning lotion work.

Most tanning lotions are designed to give their users a tanned appearance without exposure to the sun’s radiation. The most common ingredient in the sunless tanners is the DHA which is an abbreviation for Dihydroxyacetone. This is a color additive that reacts with the amino acids on the skin’s surface, causing it to darken.

There is, however, much more science that goes into achieving a good tan by making use of tanning lotions. To help you better understand what is tanning lotions and how they work, this article will take a deeper look at different tanning lotions.

Bronzers feature compounds that give the user’s skin a darker appearance without melanin’s usual response to ultraviolet (UV) rays. Instead, the bronzers bind the proteins on your skin’s surface to darken it over the next two to four hours after application.

Since it takes a couple of hours to achieve the full tanning effect, you should avoid bathing or showering after using the bronzers. Although bronzers are ideal for giving the user an instant tanned look, the tanned color they produce usually fades within 7 days.

What Are Bronzers Made Of?

To provide an ideal answer to what is tanning lotion, we have to look at the compounds that go into making different types of tanning lotions. DHA – Dihydroxyacetone – is the most common bronzing agent.

Tanning lotions often contain up to 15% DHA. However, the lotions available to buy online or from local stores max out at approximately 5% and are usually in the 3 to 5% range. Generally, the higher the DHA percentage, the more pronounced the tanning action. However, higher percentages are usually more susceptible to streakiness after their application.

Another chemical – erythrulose – can also be used in bronzers. However, since its tanning effect is usually gradual, it is often used in conjunction with the Dihydroxyacetone (if at all).

To give you a tan appearance, the DHA acts on dead skin cells on the surface of the skin. The amino acids in this dead skin layer react with DHA to produce chemicals known as melanoidins. The reaction is classified as the Maillard reaction – precisely, the reaction that is responsible for the browning of foods such as meat during cooking.

The melanoidins produced by tanning lotions absorb various wavelengths of light due to their structure. This results in the visually browning effect on your skin.

The browning effect takes an average of 3 hours to kick in and the skin may continue darkening for as much as 3 days (72 hours). Because it is the dead cells on the surface of the skin that the tanning lotion works on, its effect starts to fade as the dead cells are shed. To maintain the tan, re-application is often necessary after 7 to 10 days.

While the bronzers take some time to tan the skin, they are a great shortcut to tanning without risking getting sunburned. Much safer than tanning through the clouds, bronzers are an ideal option for anyone willing to reapply them every once in a while. 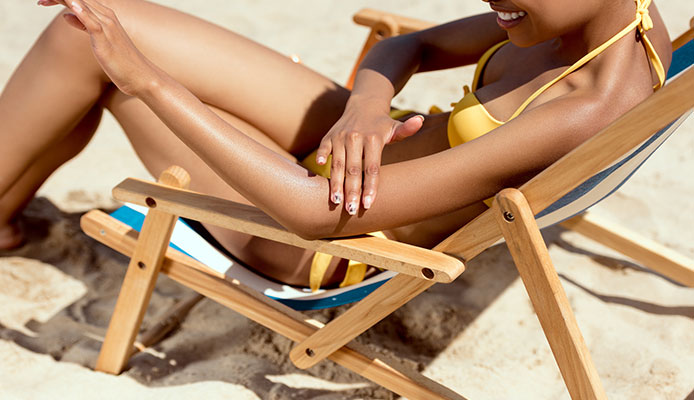 Ideal for expert tanners, tingle tanning lotions are the best bet for people looking for a natural sun-kissed look that does not leave streaks. Just like their names suggest, tinglers are lotions that make the user’s skin tingle – they are made up of ingredients that increase blood flow in the skin, giving the user a tingly feeling. Tingle tanning lotions help enhance and accelerate the natural tanning process.

What Are Tinglers Made Up Of?

Methyl Nicotinate works by increasing microcirculation to the user’s skin. This exposes melanocytes – the melanin-producing cells located in the epidermis – to more oxygen. Exposure to ultraviolet radiation triggers the production of more melanin through a process known as melanogenesis. This makes the skin darker.

Similar to methyl Nicotinate, Benzyl Nicotinate also increases microcirculation and exposes the melanocytes to more oxygen, hence increasing melanin production and thus giving you a deeper tan. When absorbed in the skin, the compound opens up the capillaries under the skin to enhance blood flow.

Similar to tanning oils, tingle tanning lotions also contain moisturizing agents. Some of the moisturizing agents include white tea extract, essential oils, and black currant. In addition to helping the UV rays penetrate the skin, they help the skin retain the tan for an extended period.

Q: How Does Tanning Lotion Work?

How tanning lotion works will vary depending on the type of lotion you are using. Bronzers – which contain dihydroxyacetone (DHA) as their main component – react with the amino acids in the dead layer of skin to produce melanoidins. The melanoidins, in turn, absorb certain wavelengths of light resulting in the browning effect.

Tinglers – which contain Methyl or Benzyl Nicotinate as their main components – increase blood flow on the skin. This exposes the cells responsible for melanin production to more oxygen, resulting in melanin production and hence a darker skin.

If you have been wondering what is tanning lotion, this guide should answer your question. The article also contains detailed answers to how does tanning lotion works. Often used by people who do not have time to apply sunscreen and relax on their beach chairs, tanning lotions allow you to achieve the tanning effect pretty quickly.