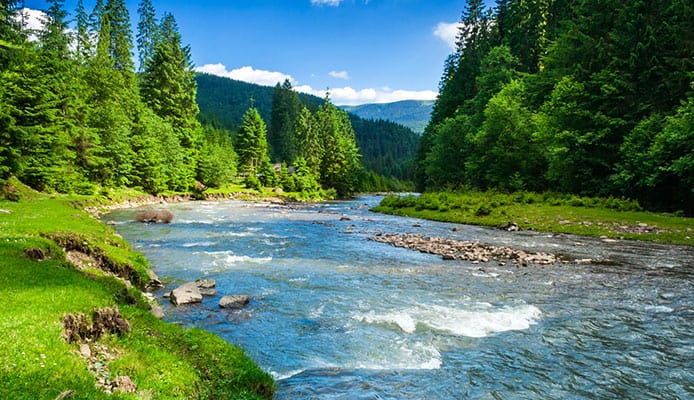 Learning how fast the river flows can be not just an interesting piece of information, but also something rather important if you plan on going speed kayaking or fishing. The speed of the water directly affects your safety and the way you move. In this article, we’ll explain the river velocity, talk about the factors that affect it, and learn the interesting and fun ways to measure the river velocity. But, before that…

How Fast Do Rivers Flow?

The most accurate and most often the answer to this question is somewhere between 0 meters per second (m/s) to 3.1 m/s (7mph), but this rule doesn’t apply to all the rivers worldwide. For instance, Amazon or Orinoco go faster than Mississippi or Danube, and these two are faster than Lim (Balkans) or Everglades, often called “grass river”. It all depends on the terrain, slope gradient, the channel roughness, tide…

As you already know, the rivers most often go from higher to lower elevation. The higher the elevation, the faster the river will be. On the other hand, the speed will drop at the base level, because there is no gradient, so the energy is low. But that’s not all, as several more factors affect the river’s velocity.

The river’s speed is directly related to some of the factors like the channel shape, the gradient of the slope, the water volume, the riverbed, and the friction, the erosion… And, as you can guess, it could vary from place to place – somewhere it can be fairly quickly, while in the other areas the same river could look more like a lake than an actual river.

The Shape Of The Channel

This is simple physics – the bigger the volume, the faster the river will be. Also, as the volume increases the level of erosion rises with it, creating a deeper and wider river bed that will allow the water to move easily.

Smoothness And Roughness Of The Channel

If there are lots of stones, rocks, or sand in the channel, the water will be slowed down by the friction and the resistance. The channels with fewer rocks and sand don’t have to deal with those, so the water saves the energy and therefore moves faster.

Gradient And The Elevation Of The Riverbed

The steeper the slope, the faster the water will be, thanks to gravity. For the experiment, you could take a bucket and fill it with water. Now start to pour the water. You’ll notice that the speed of the water running out of the bucket will increase as you turn it. The same principle works for the water in the river. When it meets the steep slope, it will gain speed. Also, it goes the other way – if the water runs into an uphill area, it is more likely that it will go slower.

How To Measure Water Velocity 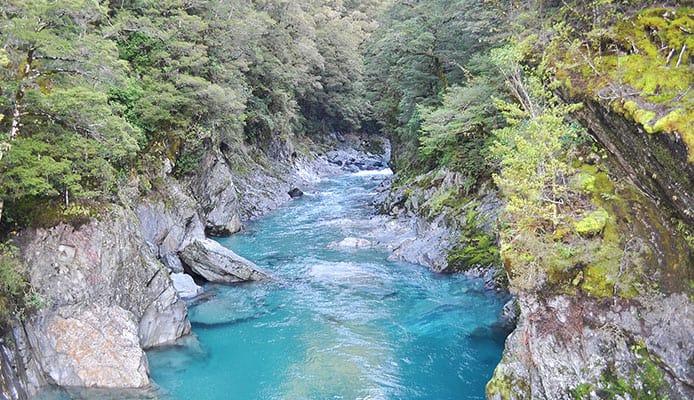 Now the time has come to have some fun! Measuring velocity is not complicated, it is actually really simple. All you need are a stopwatch or a watch that could measure time in seconds, something that will float, and a tape measure. Things are a bit more complexed when it comes to measuring the velocity under the surface because you’ll need a velocity meter.

The easiest way to determine the velocity is to set the distance, like 10, 50, or 100 meters (or feet), and then to measure the time your float needed to pass that distance.

Before you head to the field, you’ll have to find something that will surely float, but that’s not enough, you’ll need some additional features for it to work:

So, what float is the best one for measuring water velocity?

The answer is simple and quite tasty – oranges and apples. Of course, you could go and get something special for this occasion, but they are not cheap and there is a strong possibility you’ll lose some of them while on the field.

Both oranges and apples float, they are easily spottable – especially oranges – and more endurable you think.

Use the tape to measure the wanted distance. Someone will have to cross the river to the upstream end of the length. Their mission is to simply release the float a few meters before the starting point, not to throw or push it. This way it will move with the speed of the river the whole distance.

When the person with the stopwatch gives the signal, the float should be released and the timing should start. When it reaches the finish line, stop the stopwatch. Write the results instantly and repeat at least 3 times. Now sum up the times, divide it with the number of tries and you’ll get the average speed for your distance. Dividing the distance with the average time will give you meters/feet per second data.

Or you could simply go and get a flow vane, the instrument made to measure the velocity.

If you plan on going any river activity, it is good to know how fast do rivers flow. This article will help you learn how to measure it.