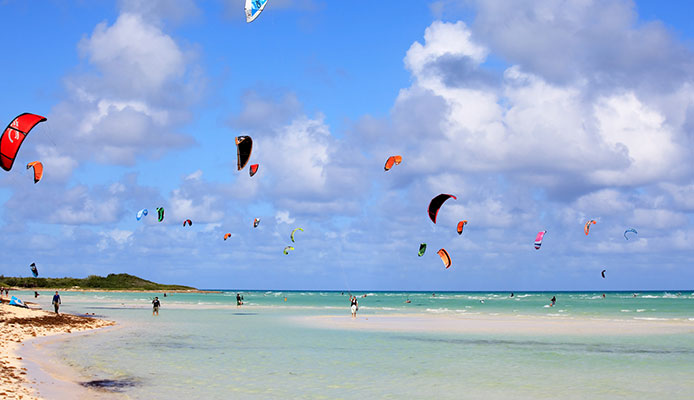 With a rush of adrenaline, kiteboarding is a fun and exhilarating sport and one of the few activities that allow you to harness the power of the wind and waves. While you may be eager to hit the beach, you shouldn’t head out solo. Kiteboarding schools can help you practice your skills and assist you in finding the best locations for learning how to kiteboard.

While everyone wants to jump into paradise, kitesurfing schools aren’t just about nature’s aesthetics. You need to pick a location where the water is calmer and deeper. Kiteboarders also need the right wind conditions to safely practice their sport. There should be a breeze, but it shouldn’t be so strong that you’re unable to control your kite.

For you to become an independent kiteboarder, you will need to spend some time in kiteboarding schools to learn the skill set that comes along with the sport. With practice and experience, you can become a pro at kiteboarding.

We want you to become a successful kiteboarder, so we have made a list of the ten best kiteboarding schools and locations for beginners to test the water and learn how to soar.

The Ten Best Locations for Kitesurfers

There are many places around the world where you can go to kitesurf, but these ten locations stand out from the crowd as being the most beginner-friendly.

As Europe’s top kitesurfing destination, Tarifa gets a lot of tourism because of this adventurous sport. With plenty of sunshine and wind, this small town is a paradise for beginners and even advanced kitesurfers. Located in Spain, Tarifa is well-known for having warm coastal water and consistent wind, which is exactly what kitesurfers need to jump, carve, and spin through the air.

However, beginners should take caution and only head out with a guide. Strong winds from the Mediterranean blast through the Strait of Gibraltar, which lift kitesurfers off of the water. Inexperience can be dangerous, but with plenty of kiteboarding schools in the area, beginner kiteboards can head out safely.

Yet, the winds are not consistent year-round. Rather, the strongest gusts and most reliable time to learn how to kitesurf is from April to June and September to November. Towards the end of the season, in October and November, there will be even fewer crowds, so you have more room to practice.

Jumping continents and heading to the south, Morroco is the second-best place to learn how to kitesurf. Specifically, Essaouira has become the top destination on every kitesurfer’s travel list. Situated on the Atlantic Coast, Essaouira is a well-known and developed town that is famous for its waves and fishing. Locals live off of the ocean, while tourists flock to the area to get their chance to play in the waves. With a balance of strong winds and gentle waves, Essaouira is a popular destination for beginner and experienced kitesurfers.

However, in Essouira, you don’t have to worry as much about being blown away. The bay of Essouira is protected by Mogador Island, which stops large waves and gusts of wind from harming kitesurfers. Local kiteboarding schools can help you kickstart your journey into the sport and teach you the basic skills you need to kitesurf.

While the waves are gentle throughout the year, the water can be too flat in the offseason. The best time to visit Essouira for kitesurfers is between March and October.

Another spot that is located close to Morocco and in the African continent is the Red Sea in Egypt. While Egypt is most famous for the Pyramids of Giza and the Nile River, the coastal areas of this ancient nation are great for kitesurfing schools and their students. Another area where the waters are gentle and the wind reliable, the Red Sea is a great place for beginner and intermediate kitesurfers.

The flat water makes it easy for beginners to practice their skills without worrying about battling strong waves. With a pleasant wind and warm weather, kitesurfers can enjoy the Red Sea any time of the year. However, the most popular time to visit is from mid-May through mid-October.

For travelers who want to head over to Asia, one of the continent’s best kitesurfing destinations in Boracay in the Philippines. While the area is well-known for its white-sand beaches and stunning tropical landscape, the water will lead you to a heart-pumping adventure. Boracay Island has a protected lagoon, which provides kitesurfers with calm water and onshore wind.

Beginner kitesurfers will notice that the wind is stronger during the morning hours, but by the afternoon, the breeze should be calm enough to practice their skills. The beaches tend to be less crowded in the afternoons too. For the best experience, you should visit Boracay during the months from November to May.

Hopping over to Sri Lanka, Kalpitiya is the country’s number one spot for newbie and beginner kitesurfers. The lagoon is wide and long, so there is rarely an issue with overcrowding. In addition to fewer crowds, the water is flat and shallow, which is perfect for learning how to kitesurf. Kalpitiya is well-known for its dolphin and whale watching seasons, which also allows tourists to kitesurf with the local wildlife.

However, the pods of these magnificent creatures only tend to frequent the area from December to April. For kitesurfers, the best months to visit Kalpitiya are from May to October and December to March.

For a Caribbean adventure, Cabarete is the best place to catch the waves when you’re in the Dominican Republic. This local beach has become a hotspot for kitesurfing schools to teach beginners the art of the sport. With two beaches, Cabarete Kite Beach and Cabarete Bay, there is plenty of space for everyone to get out and have fun in the sun.

However, beginners are warned to stay close to shore and behind the reef. Further out in the water, the waves get rough and the wind stronger, which is where the advanced and experienced kitesurfers go to play. Besides, the best time of the year to kitesurf in Cabarete is during the summer months from June to August.

Spain steals another spot on your list, but this time in the Canary Islands. Fuerteventura is one of the most diverse locations that provide kitesurfers with high winds and great waves. The water can get a bit choppy, which is when the experienced kitesurfers head out, but kiteboarding schools claim the area when the swells have died down and the waves become flat once again.

The most popular beaches in Fuerteventura for kitesurfers are Sotavento and Flag Beach. These two beaches are great for beginners because the soft sand makes it easy to launch your board and kite. Fuerteventura is the most crowded from May to September, which is also the best time to go kitesurfing.

Located in East Africa, the Zanzibar Archipelago is officially a part of Tanzania. Zanzibar Island is the place to go and it has made headlines around the world for its pristine water and white sand beaches. The island is also one of the best spots to go kitesurfing because the beaches are protected by a large coral reef. This stops waves from getting too big, which makes Zanzibar ideal for beginner and intermediate kiteboarding schools.

Another big draw is that Zanzibar has remained relatively off of the radar, which means you don’t have to dodge big crowds on the beach. The best time to kitesurf in Zanzibar is during the summer months from June to September and in the winter months of December to mid-February.

Often called the kitesurfing and windsurfing capital of the world, Mui Ne is a world-famous destination for kitesurfing schools and enthusiasts. Facing the South China Sea, Mui Ne quickly becomes packed with kiteboards of all skill levels who flock to the area to harness the power of the wind. Beginners are better off surfing in the afternoon, which is when the winds have calmed down. In the morning, the winds are the strongest and best left to the pros.

While the weather is great throughout most of the dry season, the absolute best time to visit Mui Ne is during the winter from November to March. During these months, the monsoon season has ended and the strong winds return to the area to give kitesurfers an extra boost.

Known for having sunshine all year round, Cumbuco is Brazil’s number one destination for kitesurfers. The area is well-known for its idyllic beaches, but this fishing village has become famous for the Cauipe Lagoon, which is one of the world’s best training spots for beginner and professional kiteboards. Beginners will feel most comfortable in the southern area of the lagoon, while further north, the advanced kitesurfers hit the waves.

While Cumbuco stays warm throughout the year, the winds are not always consistent. The best time to visit Cumbuco is from July to December. 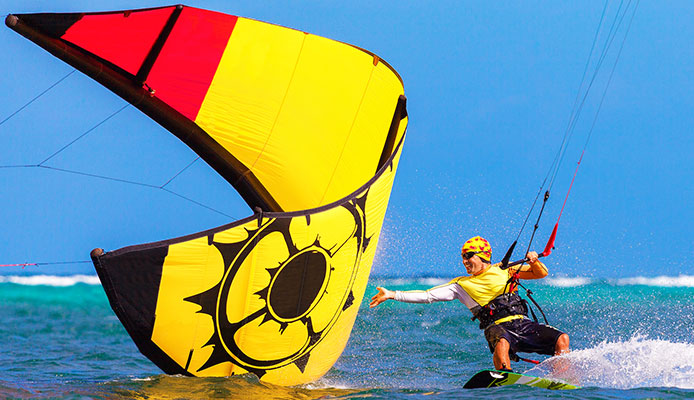 With so many kitesurfing destinations around the world, you don’t have to cap your dreams if you want to learn a new sport. Instead, you can travel to one of these top ten destinations to learn how to kitesurf in optimal conditions. Plus, once you’ve chosen your next destination, all you have to do is enroll in one of the local kiteboarding schools to start your grand adventure.