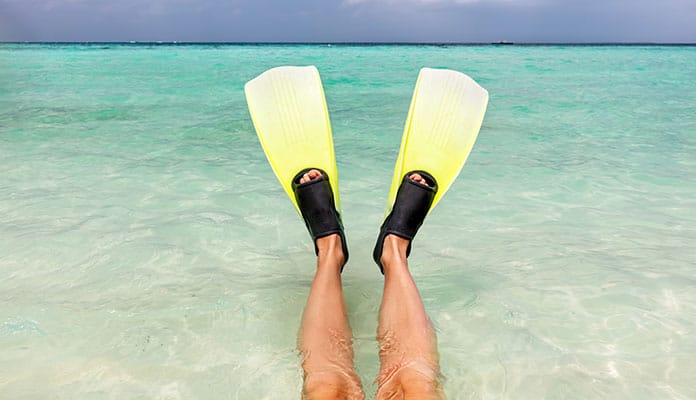 The fin is an integral part of your water experience. Whether you are snorkeling or scuba diving, the fin will help you gracefully move through the water with ease. With the growing popularity of snorkeling and diving, there has been a drastic increase in the demand for gear.

This has led to today’s fins having some incredibly advanced and impressive technology. The idea of the fin has been around for a long time and has quite an interesting history. Understanding the history of fins will help you to decide which is the best type for you.

Let’s take a look at how the fin has progressed through the years.

The Swim Fins along the Years

The design of the fin is first recorded in 1717 developed by 11-year-old Benjamin Franklin. His invention started as oval paddles made of wood which he reported being similar to an artist’s pallet. The pallet caused fatigue to his wrists which led him to transfer the design to his feet similar to a sandal. This early invention landed him in the International Swimming Hall of Fame roughly 240 years later.

This is when the swim fin took the modern form of today. Just like some other great products, the swim fin was intended for the military. A group of French Naval officers perfected the design with it finally starting production for the public in 1939.

A competing design was based on the look of what the people of Tahiti were using. This version utilized vulcanized rubber which allowed the rubber to take a permanent shape without being sticky. The construction process also made this version of the swim fin more durable than the previous prototypes.

The full foot boot style fin was developed by an Italian company called Cressi-Sub around the 1940s. This began a time when people had more than one option when it came to fins and started a competition to come up with the next big advancement.

Researchers took a stab at the weight and flexibility of the fin. They added vents and side rails which made each kick easier. This is the period where a full foot fin became popular with snorkelers and a strap boot was designed for scuba divers.

The 1990s were all about the fin blade. They were large and bulky up to this point and the companies were trying to make them sleeker. One company decided to create a fin that seemed to be broken in two and thus the split fin was born. This period also saw advances to the strapping system which gave us the quick release buckle we have today.

We have progressed quite a bit since the 1700s when a young Franklin first came up with the design. It is hard to believe that even with all of our modern technology there will likely be even more advanced in years to come. This is an incredibly exciting time to be a snorkeler.