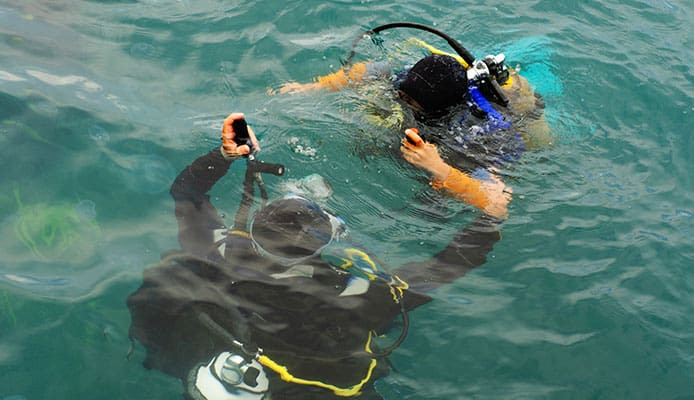 We were all taught in grade school that oxygen is necessary for humans and other mammals to survive. However, classroom discussions usually end there, and not many teachers go on to explain that this gas which is vital to sustaining life, can also cause its end. Confusing? Well, it shouldn’t be, especially when you’re taught that too much of a good thing can actually be bad. In this case, inhaling oxygen at higher concentrations can cause what divers call oxygen toxicity, a condition that can lead to serious and potentially life-threatening health problems when left unchecked.

What Is Oxygen Toxicity?

The air that we breathe on land is not pure oxygen. Instead, it is composed of only 20% – 21% oxygen and about 79% nitrogen. There are also less than 1% of other gases in the air like carbon dioxide, helium, argon, and others. For divers to breathe underwater, the air inside their scuba tanks is filled with a gas mixture that follows this combination, also referred to as “atmospheric air” or simply “air”. Divers also use other types of gas mixes like nitrox, trimix, and heliox, all of which contain varying amounts of oxygen (i.e. most nitrox combinations use 32% – 36% oxygen).

At this point, it must be noted that it is not the amount of oxygen inside the tank that is a cause for concern, but rather the partial pressure of the oxygen in it. Breathing in oxygen molecules at elevated partial pressure results in a condition called oxygen toxicity.

For most scuba divers who stay in shallow waters and within recreational diving depth limits, oxygen toxicity is rarely a problem. However, this condition becomes a concern for divers who 1) dive beyond recreational depths; 2) use gas blends like nitrox, and 3) use 100% oxygen as a decompression gas.

Partial pressure simply refers to the pressure exerted by one gas in the gas mix or blend.

So let’s say for example that you have 100% oxygen in the tank. This means that the total gas pressure would be equal to the partial pressure of the oxygen or O2 inside it (PP = pO2).

Thus, to breathe normally underwater using scuba tanks, we want the partial pressure to be at 21% or 0.21 atmospheres absolute (ATA) which our bodies are used to on land. When diving for long periods, our bodies can tolerate up to 0.45 ATA. In shorter dives, the body can tolerate up to 1.6 ATA.

What Is Pulmonary Oxygen Toxicity?

As mentioned earlier, our bodies can tolerate up to 0.45 ATA when diving for long periods. Some well-trained divers with the right equipment can push this higher.  However, when divers breathe in oxygen for long periods at partial pressures greater than about 0.6 ATA, pulmonary oxygen toxicity can start to set in.

Pulmonary oxygen toxicity is usually a concern for divers going into long technical dives (i.e. extended cave dives and explorations) that last between 6 and 12 hours or more. As the name suggests, this type of oxygen toxicity affects the lower respiratory tract including the trachea, bronchi, and lungs.

Many divers who have experienced pulmonary oxygen toxicity describe the feeling as similar to getting a bad case of flu. Although it may be uncomfortable, this rarely causes any permanent damage if addressed immediately.

Within minutes, the diver will then start to feel a generalized pain behind the sternum or breastbone. This pain will continue to increase in intensity, spreading to the rest of the chest, trachea, and bronchi. In time, the diver will experience tightness in the chest, difficulty in breathing, and shortness of breath. If the diver does not address this problem at this stage, it can damage the diver’s lungs and cause life-threatening health hazards.

What IS CNS Oxygen Toxicity?

CNS oxygen toxicity happens when the diver breathes in oxygen at partial pressures that are greater than 1.6 ATA. Divers may not immediately be affected by CNS oxygen toxicity even in prolonged dives as long as they stay within these limits. However, they may experience ocular toxicity, which is manifested by the narrowing of the diver’s visual field. Going beyond the limits though will cause the oxygen to turn toxic, breathing this in will start to negatively affect the diver’s central nervous system.

The symptoms of CNS toxicity

When CNS oxygen toxicity sets in, the symptoms usually come on much more abruptly and can do more damage if the diver doesn’t take immediate action to correct the problem. There are various signs of CNS oxygen toxicity, including changes in vision and hearing, anxiety, irritability, confusion, nausea, vomiting, and dizziness. At worst, CNS oxygen toxicity can lead to convulsions and unconsciousness, two of the worst things that can happen to any diver while underwater.

How to Avoid Oxygen Toxicity? 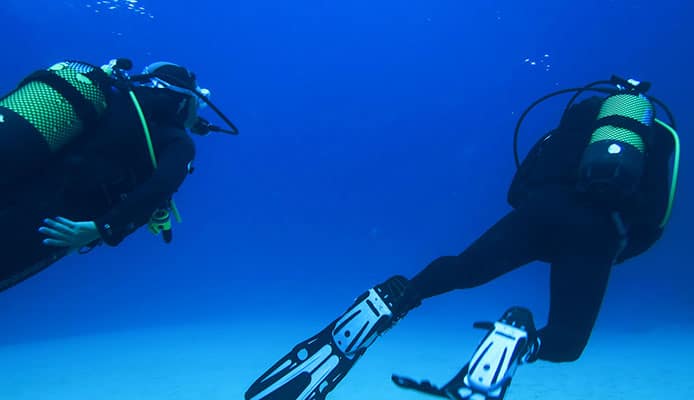 Oxygen toxicity can have very serious effects on the health and welfare of the diver. It is thus important that divers not only be aware of the causes and symptoms of oxygen toxicity but also of the different ways that it can be avoided.

In fact, recreational divers will have to dive to depths of more than 200 feet before they can worry about suffering from oxygen toxicity. This is because, at these depths, the total gas pressure can reach up to 7.61, which means that the partial oxygen pressure is at 1.6 ATA.

Realistically speaking, most recreational divers, especially the first time divers, will only go a little over 100 feet in depth. Besides, there is a lot of marine flora and fauna to see at this depth already, so why bother going deeper? If you’re looking for interesting underwater topography, there are many dive sites where you can explore small canyons, rock walls, and ledges, and other seafloor landscapes all within the recreational diving depth limit.

When using gas blends like nitrox where oxygen components can be as high as 36%, you’ll need to make adjustments to your diving depths to remain within the acceptable partial pressure levels. As mentioned above, under normal conditions you can dive to depths of 200 feet before oxygen toxicity sets in. However, with nitrox blends, oxygen toxicity can happen way before you reach the said depth.

Thus, if you’re using nitrox or another gas mix with higher oxygen content, be sure that you are aware of the depths where it is safe to use. You can refer to dive tables for more information, or you can use high-end dive computers which can be set up in a way that notifies you if you go beyond the safe oxygen partial pressure levels.

Most technical divers will need to bring with them one or more separate decompression gases during their dives. This additional gas which has a different mix than the usual or contains 100% oxygen will help to optimize the divers’ rate of decompression and thus allow them to ascend to the surface safely without being affected by decompression sickness.

Technical divers need to switch gases at the right depths. If they don’t, oxygen toxicity is bound to set in. Although incorrect switching rarely happens among experienced technical divers, it is still prudent to be aware of the proper steps to be taken when doing this maneuver to avoid untoward incidents from happening.

One method employed by most divers is marking the gas cylinders appropriately. Another way is to always have your buddy double check that you are switching to the right gas at the right depths. Also, be sure that you adjust your dive computer to let you know that you’ve switched gases.

As they say, there’s more than one way to do things and other divers may recommend other techniques to make gas switching safer and more effective. What’s important though is that you don’t become complacent when it comes to switching gases while underwater. The potential consequences of a sloppy gas switch can lead to oxygen toxicity and other health risks and even possible fatalities.

Oxygen toxicity is one of the different health and life hazards that come with scuba diving. Fortunately, the cases are few and far in between, which means that this shouldn’t be too much of a worry. However, this does not mean that you can be complacent. You still need to be vigilant and protect yourself at all times simply because the consequences are too severe, putting not just your health but also your life in danger. To avoid falling victim to oxygen toxicity (and other diving hazards) be sure to spend some time working on your dive plan, and more importantly, stick to it.

You can look up dive tables provided by the National Oceanic and Atmospheric Administration or other related agencies and use them for reference. You can also use a dive computer if you’re looking for something more convenient. In fact, using a dive computer may be a better idea since the calculations are done automatically and reduce human mathematical errors. In any case, being careful and sticking to your dive plan will not only keep you safe from the harmful effects of oxygen toxicity, but it will also ensure that you have a great time exploring the rich flora and fauna and beautiful landscapes underwater. 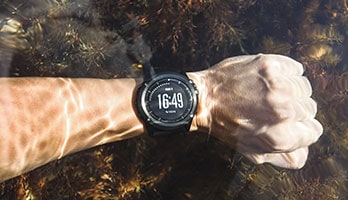 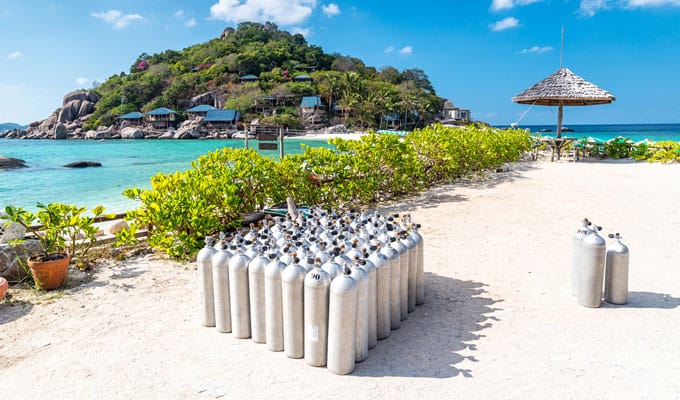 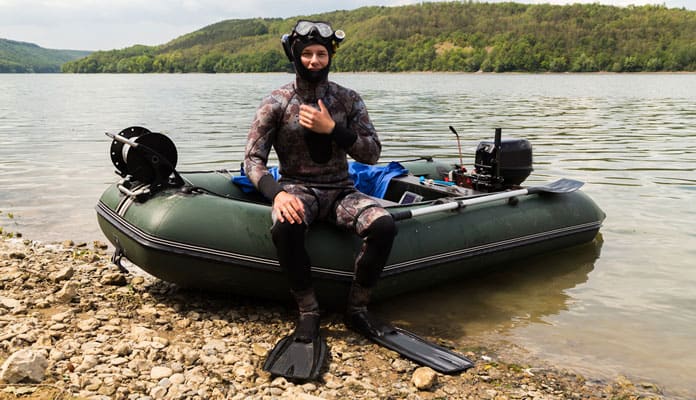