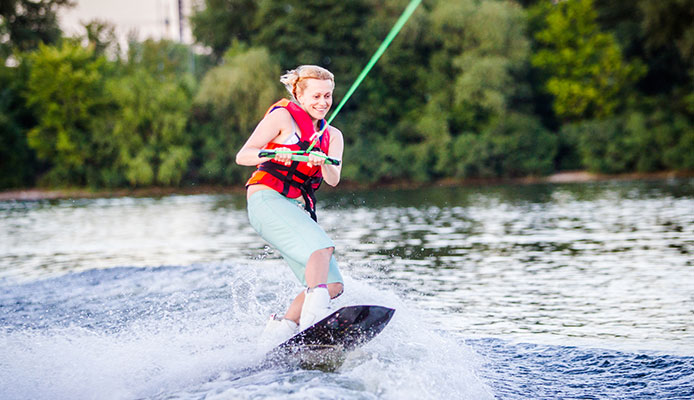 Fun and exhilarating sports, both kitesurfing, and wakeboarding allow water lovers to take on waves with their specialized boards. For someone new to the sports, however, comparing and contrasting wakeboarding vs kitesurfing can be the key to choosing a sport that offers the biggest satisfaction.

The major dissimilarity between the 2 board sports is that in wakeboarding, speed is generated by horizontal traction in a rope that is pulled by a boat, whereas in kitesurfing, speed comes through vertical traction in the lines that are pulled by a kite. It is, however, worth noting that the kitesurfing lines are not always 100% vertical, with their angle generally changing as the kite’s position changes.

Taking a deeper look at how kitesurfing compares to wakeboarding in terms of riding experience, equipment, and skills, this kiteboarding vs wakeboarding comparison guide should eliminate the mysteriousness that often surrounds the 2 sports.

Once you wear your wakeboard helmet and decide to go on a ride, you should expect to be towed at a speed of between 20 and 30 mph. On average, kitesurfers ride at speeds of between 15 and 20 mph. However, it is worth noting that in sustained wind conditions and on very flat waters, it is sometimes possible for kitesurfers to reach speeds as high as 30 mph – this, however, is not very common.

When it comes to wakeboarding vs kitesurfing speed variation, kitesurfers often have to deal with varying speeds, as their speed is largely dependent on the wind. Wakeboarders, however, enjoy a pretty much constant speed, as long as the boat does not slow down.

To have a good time on the water, kitesurfers need significant wind – generally, 10+ knots – to provide traction for their kite. If you grab your board shorts and rash guard for a wakeboarding expedition, the perfect conditions will be glassy and smooth water, which does not require any wind.

When wakeboarding, you can ride on the wakeboard’s flat surface, as you are being pulled horizontally at a constant speed. Wakeboarders only edge when riding on the boat’s side or when doing tricks.

In kiteboarding, riders almost always have to edge and ride on the board’s rail to maintain the tension in their line. Riding flat on the kiteboard, for more than a short period, can lead to slacklines, forcing the kite to stall or drop out of the sky.

When comparing wakeboarding vs kitesurfing equipment, the boards take the center stage. Below, we will take a look at how the 2 equipment differs:

Wakeboards feature more rocker than the kiteboards, typically, 3 inches vs 1-inch for the kiteboards. This is because the wakeboards are meant to go faster with a constant pull, with the rider having minimal control over the speed. Rocker helps reduce water friction and hence lowering the likelihood of your board getting caught and wiping out

Kiteboards aim to maximize floating with a lower pull power instead of focusing much on the speed. For this reason, they feature less rocker for an increased contact surface with the water.

Though kiteboards and wakeboards use the same materials in their construction, kiteboards are generally lighter – 4 to 6 pounds vs 7 to 8 pounds – and have more flex. Less weight allows the kiteboard to have better efficiency given the lower pull while more flex allows the rider to make tighter turns.

Designed to ride at higher speeds and in flat waters, wakeboards are stiffer. Also, wakeboards do not need to make tight turns since the wakeboarder cannot turn in the opposite direction.

Wakeboards feature a full boot and snowboard-like bindings whereas the kiteboards carry foot strap systems. The reason is that kitesurfers need to have the ability to take their feet off the bindings because of the unpredictable nature of the kitesurfing environment. 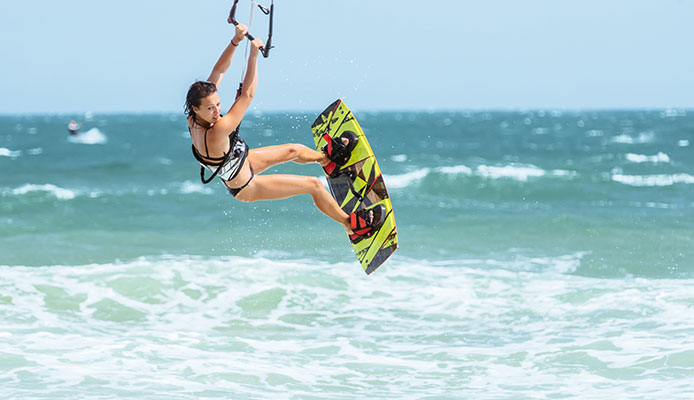 Even though kitesurfing and wakeboarding utilize similar traction-based board riding skills, wakeboarding involves higher speeds while kitesurfers need additional kite flying skills. Taking a deeper look at how the two sports compare, this wakeboarding vs kitesurfing comparison guide makes it much easier for you to choose a sport that suits you.