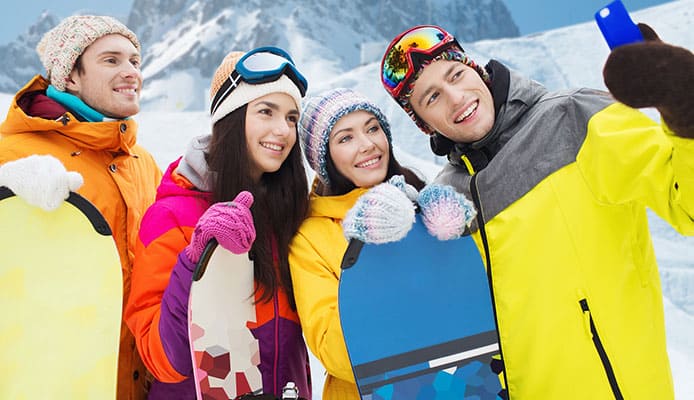 Irrespective of whether you are an expert or a beginning snowboarder, chances are, you are not familiar with all the snowboarding terms. To help change this, we have listed the important snowboard terminology in this article:

Air (Aerial) – Any leap/jump where the all-mountain snowboard (the rider, in general) lifts off the ground.

Asymmetrical Board – Boards featuring unmatched sides and designed for goofy or regular stance.

Asymmetrical Sidecut – A board featuring varying-size sidecut on either side.

Note: Learning and understanding avalanche safety before you put on your snowboard boots is crucial.

Backfoot – The foot closest to the board’s tail.

Backside – The resting spot for the heels on the snowboard.

Backside Rotation – Rotation where the back of the rider is the first thing that crosses the board travel vector.

Backside Turn – A turn on the board’s heel edge with the snowboarder’s back uphill.

Base – The underside of the snowboard; designed for gliding across the snow.

Baseless Bindings – Snowboard bindings that lack the base plate.

Blindside – Rotations where the snowboarder is blind during either the landing or take off.

Boned – Straightened leg during the jump.

Camber – An arched or curved shaped usually built into snowboards.

Cant – Feet angle, side-to-side, which causes the knees to move either outward out inward.

Carve – A carve refers to using the edge of the snowboard to turn.

Centered Stance – Mounting your bindings on a snowboard so that the distance existing between the nose and tail are equal. Offers equal control and switch after you wear your snowboarding jacket and join other snowboarders on the tracks.

Chatter – One of the most common snowboarding terms used by riders moving at high speeds. It refers to the snowboard’s vibration during turns and at higher speeds.

Chute – A strip of snow, usually narrow, bordered by cliffs and rocks.

Control Gate – A plastic pole that racers have to maneuver around.

Cornice – An overhanging lip of snow created by wind; usually on the wind-prone mountain ridges.

Couloir – A narrow, steep gully on the mountain.

Cruiser Run – Mellow and relaxed run or a fast run on a slope or smooth trail.

Delaminate – Peeling or separation of the snowboard layers.

De-tuning – Dulling the beginner snowboard (and other types of snowboards) edges to reduce their chances of catching snow.

Ding – A hole or scratch in the board’s base.

Direction Stance – A stance allowing you to ride differently in one direction from the other.

Duckfoot – An angled stance in which the toes point outward like a duck.

Effective Edge – The snowboard edge which comes into contact with the snow when turning; excluding the tail and tip edges.

Fall-Line – The path featuring the least resistance. The snowboard terminology refers to the gravity line down the slope.

Fifty-Fifth – Sliding the snowboard parallel to a coping.

Flail – Riding out of control.

Flex – The receptiveness of the snowboard to twisting along the length (longitudinal flex) or across the width (torsional flex).

Freeride – Riding powder, through trees in the backcountry terrain. The snowboard terminology is also used to refer to riding fast on the groomed runs.

Front Hand – The hand close to your snowboard nose.

Glide – Sliding straight without making use of the snowboard’s edges.

Gradient – The measure of the steepness of a slope.

Grind – Sliding with your snowboard parallel to the coping.

Groomers – Marked routes at resorts that have been compacted and smoothed by machines.

Head Wall – A flat area on the hill where the road cuts across the ski run.

Heel Drag (Overhang) – Drag which results from the heel hanging off the board’s edge.

Heel Edge – The edge where your heels rest.

Heelside – The board’s edge closest to your heels.

Heelside Turn – The turn you make on your heelside edge.

Hole pattern – The way the holes on a snowboard are patterned for bindings attachment.

Hucker – A snowboarder who goes airborne in an uncontrolled manner with little or zero regard for his or her safety.

Iguana Air – Using the rear hand to grab the snowboard’s toe edge, close to the tail.

Indy Air – The rear hand grabs between the bindings on the toe edge while your rear leg is boned. The snowboard position will be higher than the rider’s head.

Indy Nose-Bone – The front leg stays extended while the rear leg stays bent. The rear hand is used to grab the front edge.

Insert – A metal piece featuring a threaded hole and laminated to the board. Generally used for screwing the bindings to the board.

Invert – Balancing on one or 2 hands with the head beneath the board level.

Inverted Aerial – When the rider becomes airborne and upside down at any moment.

J-Tear – An invert generally rotated approximately 540 degrees in the front side while planting 1 or 2 hands on the wall’s lip.

Jib – Riding on any surface other than snow.

Kink – Coming into contact with rough or abnormal surfaces, when performing a jump or in the halfpipe.

Knuckle-dragger or Knuckle-grabber – What pinheads will sometimes call snowboarders.

Late – Putting an additional move into a trick before you land.

Layback Handplant – 180-degree handplant using the frontside for rotation while your rear hands hold the wall lip behind the point of takeoff.

Lead Hand – The hand you place closer to the front of the snowboard.

Lead Foot – The foot you place close to the front of your board.

Leash – A safety strap usually connecting the boot to the side of the rider’s binding.

Lip – The top edge available on the halfpipe.

Lip Trick – A trick performed by riders close to the top of the halfpipe.

McEgg – An invert where the snowboarder plants his or her front hand on the wall, rotates approximately 540 degrees backside, and then lands riding forward.

McTwist – The rider rides forward to the halfpipe wall, goes airborne, rotates approximately 540 degrees in the backside direction while using the front flip, and then lands while riding forward.

Mellow – The rider’s front hand grabs the backside edge between the bindings.

Melonch Ollie Air – While keeping the front leg boned, the front hand reaches behind and grabs the backside snowboard edge, in between the bindings.

Method Air – While keeping both knees bent, the rider’s front hand grabs the heel edge and pulls the board level with the head.

Mosquito Air – The rider reaches for the heel edge in between the bindings with his front hand while keeping the front knee bent to touch the snowboard tuck-knee style.

Mute Air – The toe edge is grabbed with the front hand, either between the rider’s toes or in front of the rider’s front foot.

Nine Hundred (900) Air – The rider rotates about 900 degrees in the air and then lands riding switch.

Nollie – An ollie that springs off the nose instead of the tail of the snowboard.

Nollie Frontflip –Springs off the snowboard’s nose while going off the jump and leaning forward into the front flip.

Nose-Bone – Jumping with the rear leg flexed and the front leg straight.

Nose Slide – Sliding along the ground on the snowboard’s nose.

Ollie – A jump into the air that does not feature any assistance from a jump.

Piste – A groomed and packed trail.

Plate Binding – Binding system used together with the hard-shell boots.

Poach – Riding the park while it is closed.

Rear Foot – The foot you mount close to the tail.

Rewind – Where the rotation is stopped, reversed, or initiated.

Rocker – The opposite of the camber. The snowboard’s tail and tip rise from the ground while the center touches it.

Rolling Down the Windows – Rotating the arms wildly to regain balance.

Runout – Flat area available at the bottom of the slope.

Shovel – The lifted sections of the snowboard, usually on the tail and tip.

Sidecountry – Backcountry terrain lying just outside the boundaries of a resort.

Sidecut – The inward curve or arc created by the snowboard’s edge.

Sideslip – Sliding sideways down the slope.

Stance – The bindings position on the snowboard.

Stance Width – The distance existing between the center and the bindings.

Stinky – Riding with the knees apart and the legs spread open.

Table Top – A jump where both the landing and takeoff are connected.

Toe Edge – The board edge where the rider’s toes rest.

Traverse – Riding perpendicular or diagonally to the fall line.

Tweak – Pulling the board backward or forward while you are in the air.

Twin Tip – The tail and nose of the snowboard are shaped identically.

Twist – Rotating the lower body during the jump.

Vert (Vertical) – The top portion of the wall in the halfpipe.

Wall – The vertical section of a halfpipe.

Waist – The narrowest point in the middle of the snowboard.

If you have recently invested in snowboard gloves and you intend to start snowboarding, snowboarding terms can come in handy. If you will be training with experienced snowboarders, you are likely to hear them refer to the snowboard terminology outlined above. If you already know what each terminology means, acing your practical lessons should be much easier. 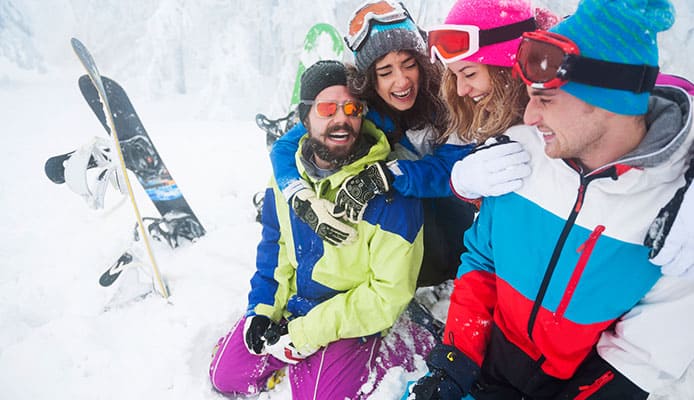 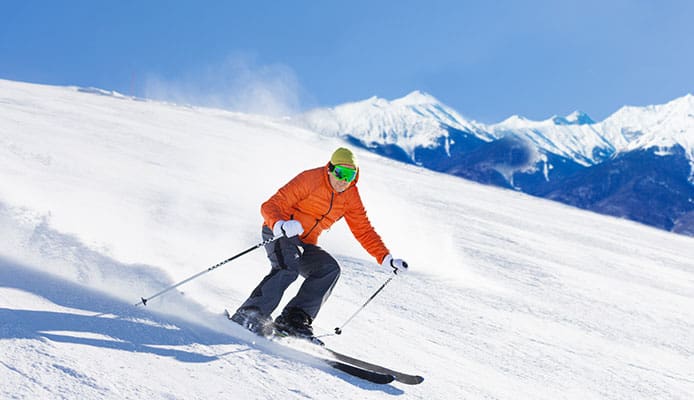 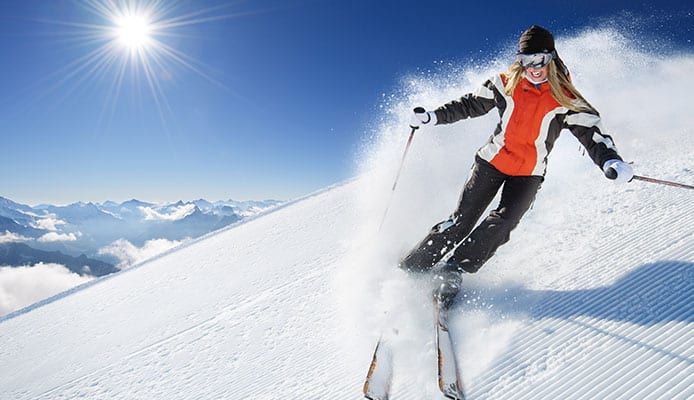