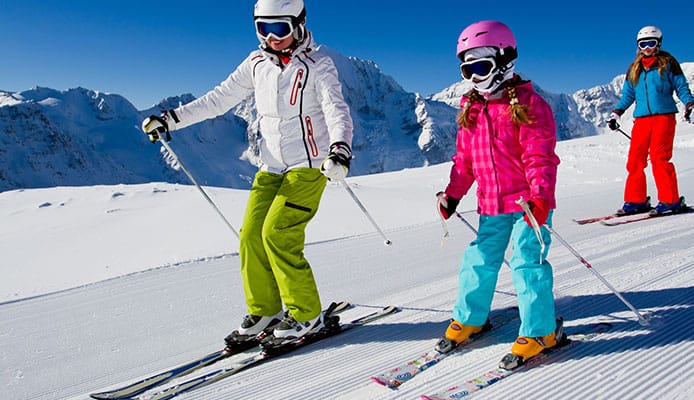 On the surface, skiing is just grabbing the skis, heading to a snow-covered mountain, and gliding down the slopes using the power of gravity. Well, that’s basically it.

But just do a little scratching below the surface and you will find a basketful of skiing terms, phrases, words, slang, and jargon that literally get your head spinning. If you are just getting started with skiing and can’t get your head around the lingo, this article is for you.

We have put together a handy list of common skiing terminology – sort of skiing dictionary – to help you get a hang of the vocabulary. So sit back, grab a coffee, and read up!

Also known as downhill skiing, alpine skiing uses rigid cambered skis, releasable bindings, and hard shell ski boots. Both the toes and heels of your boots are usually fixed to the skis.

The mechanical slider or pad is attached above the ski, right at the back of the binding toe unit where the toe of your ski boot rests. Its purpose is to minimize friction between the boot sole and the ski top, enabling a smooth boot release during a fall.

A style of skiing that involves freestyle gymnastic-type maneuvers on skis like jumping with grabs and spins, steep skiing, and riding trails.

Also known as one-ski quivers, all-purpose skis, or mid-fat skis, all-mountain skis are skis built to perform in various snow conditions at a high speed. Most alpine skis fall under this category.

“Après” is French for “After”, so “Après Ski” technically means after ski. It doesn’t actually involve any kind of skiing, rather, the entertainment, nightlife, and social activities that skiers take part in after a day in the snow.

A safety device used by skiers and snowboarders to locate people who have been buried by an avalanche. Also known as a personal locator beacon, or a transceiver, an avalanche beacon works by sending or receiving signals of a buried victim. Together with a probe and shovel, it hastens avalanche survival.

This is simply skiing in ungroomed terrain. Backcountry skiing is usually for skiers who love adventuring on unmarked slopes. Since it mostly happens in the remote areas of hills and mountains, there are no lifts involved and participants have to walk uphill to get to where they want to be. Chances of getting swept up by an avalanche are heightened when skiing off-piste.

The part that sits underneath your ski bindings. It is one of the most essential parts of your bindings, as it helps in transferring your body movement to the skis.

The polyethylene material found at the bottom of your skis allows them to slide on snow when waxed.

A device that “binds” you or keeps you connected to the ski. Ski bindings differ from snowboard bindings in that the former is designed to eject you in case of a fall while the latter keeps you locked in.

These two skiing terms are used to describe the degree of an incline of a slope based on skiers’ skill levels. Blue run describes flat slopes, mostly reserved for beginners, while black run describes steep slopes, usually designated for advanced skiers.

Skiing down a slope fast and recklessly. It can be a danger to other skiers.

How curved a non-weighted ski appears when looked from the side. The camber is what determines how flexible your ski is. Skis with higher cambers feel springier than those with low cambers.

The center part of the ski determines its flex. The ski core is usually made of laminated wood or foam to help hold the structural layers apart.

A cable car is an aerial lift usually connected to a cable that transports skiers and snowboarders up and down a mountain. A chair lift, on the other hand, is usually a park bench that offers transportation back up the slopes.

Cross country skiing is performed on gentle hills and flat tracks instead of the normal ski slopes. It differs from normal skiing in that the heel of a cross country skier is not connected to the ski.

A dry slope allows you to ski without snow. It is ideal in countries that lack snow-covered mountains or skiing out of season.

Short for Deutsche Industrial Normen (in German), DIN setting is the tension release that determines the pressure at which your bindings release the boots on a fall.

Ski racing at high speed with tight jumps and turns. The speed of a ski racer can go up to 60mph.

The carbon steel strips on the edges of your skis enable you to control your turning and speed. Regular ski tuning ensures that your edges are always sharp, which enables you to make clean turns.

An aerial performed with legs and arms sprayed apart. Eagle usually happens instinctively to people who are just starting to learn how to ski, especially in their first ski. 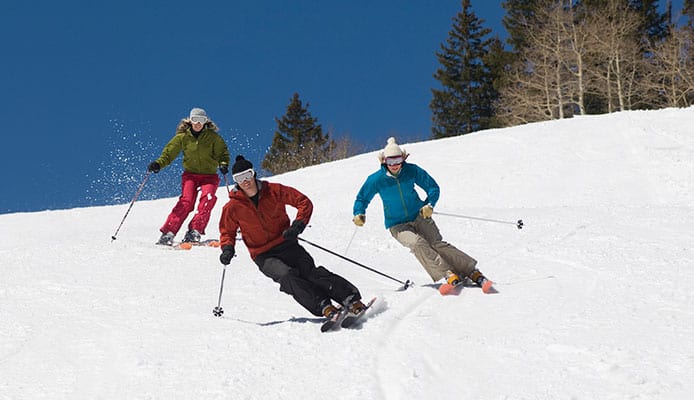 When you crash and fall on your face during a ski. Always wear a ski helmet to keep your face protected.

A face shot happens when the ice around you splashes onto your face. It is a common occurrence for people who love to ski in powder and the deep stuff.

FIS stands for Federation Internationale de Ski. It is the international body that governs cross country and alpine skiing.

A style of skiing whereby the skier uses super-sidecut skis to maneuver and make extremely curved turns at a high speed. The skier inclines in the direction of the turn and puts pressure on the legs to make a clean turn.

The skiing terminology is given to the amount of rigidness in a ski. Skis with a soft flex will work better in soft and deep snow, while those with a stiff flex will perform better on hard snow.

These are skis designed to ride in a variety of challenging terrains including powder, crud, bumps, and other snow conditions.

The term is given to ski runs that have been smoothened to allow for more consistent skiing.

A ski lift that is fully enclosed whereby skiers remove their skis and sit or stand.

When a skier grabs a part of their ski while in the air. Grabbing is an essential part of freestyling especially for those who love pulling stunts.

A U-shaped channel usually with vertical walls, dedicated to freestyles and tricks. Handy for skiers who enjoy showing off their aerial moves.

Using a helicopter to access remote off-piste areas. If you can afford to pay for chopper services and know-how to ski safely on untouched powder, then you should give heliskiing a shot.

These are the edges of the skis on the inside of a turn.

The ski or snowboard boot liner is used for cushioning and insulation. It fits inside the stiff plastic outer boot.

When the skier grabs the skis under the boot from the outer edges when executing a jump.

Jibing technically means gliding down a surface that is not made of snow during a freestyle ski on a rail or box.

A wedge built in the snow for skiers to get air. Should not be confused with a ramp.

A lift pass allows you to access the ski lifts, chair lifts, car lifts, gondolas, and button lifts in a ski resort. They will vary in price based on the park you are visiting.

A conveyor belt that skiers stand on to move, or rather, ascend a slope.

Lumps of wet snow that catch ski edges and tips, making it difficult to ski.

Moguls resemble tiny snow pyramids. They build up when skiers turn and will mostly be found on black turns. Some people call them bumps.

When both of the skiers’ boots get attached to one plank instead of two separate planks.

A ski area that is not regulated. Most skiers love coming here because such zones are less crowded. However, the risk of avalanche is high because the snow is not controlled. If you will be visiting such areas, make sure to take a course on avalanche safety and awareness and most importantly, carry avalanche rescue equipment.

This is new snow that has been ridden over or groomed. It is the perfect surface for both beginner and advanced skiers to glide on.

Slopes with controlled snow, that are designated for skiing and snowboarding. Since these are well-groomed, there is a reduced risk of avalanches, which makes them the safest for skiers and snowboarders.

Short for Professional Ski Instructors of America. It is the organization that certifies skiers in the US.

Not as easy to glide as blue runs and not as tough as black runs. Perfect for intermediate skiers and those who are transitioning from beginner to intermediate snowboarding.

Similar to a conveyor belt, a rope lift is a moving rope that you can hold on to, to go back up the slope. You hold on to one of the handles along the rope keeping your skis flat on the ice.

Ski boots that open in the back with a flap. They usually have one or two hinged flaps that you push down or pull up to open. Rear-entry boots are commonly used by beginner skiers and children.

The material used along the ski sides covers the core and structural components of your skis.

This is the difference between the waist of the ski and the tail and tip. It is measured in millimeters and the larger your sidecut is, the more readily you will curve your turns.

Skiing in a wavy or zigzag course between flags or other upright obstacles. The term can also be used to describe timed ski races over zigzag or winding courses past a series of markers or flags.

A huge machine that is driven over snow on bulldozers or belts to transport equipment or people or to groom slopes.

A part of the mountain is reserved for skiing or snowboarding. Ski areas are usually marked off by ropes or flags.

A machine that changes water into the snow and fires it out onto mountain slopes. It is particularly useful in places that lack snow on the slopes.

A lift that moves one or two skiers at a time up to the slope with their ski equipment resting on the ice. Skiers learn their buttocks or hips against the T-bar to go up the slope.

Heavy snowfall accompanied by hostile conditions that make it impossible for skiers and snowboarders to see beyond a few yards.

A substance applied to the base of your skis to help them slide smoothly on the snow.

If you are a serious skier, you must learn the language of skiing and that means familiarizing yourself with the most commonly used skiing terminology. Hopefully, this guide will help you eliminate any confusion you may have on the above phrases and give you a better understanding of what skiing is about. 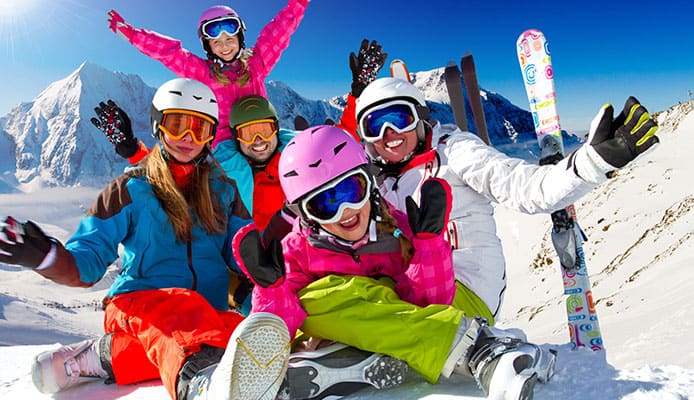 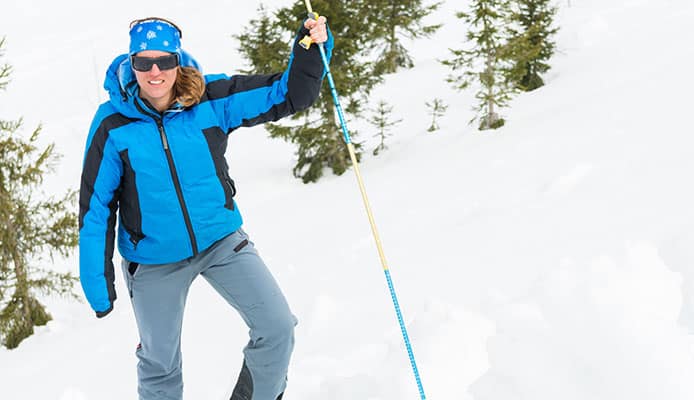 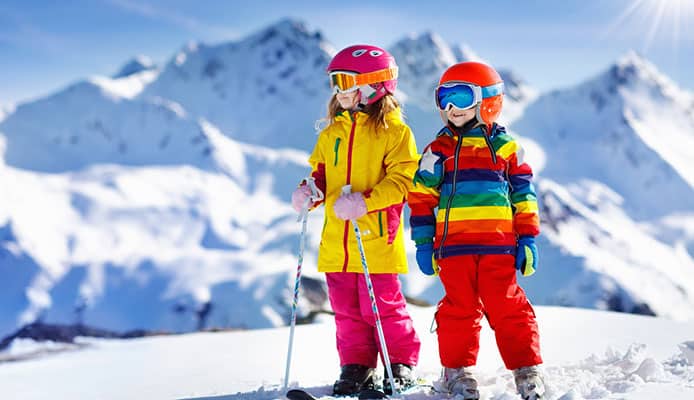