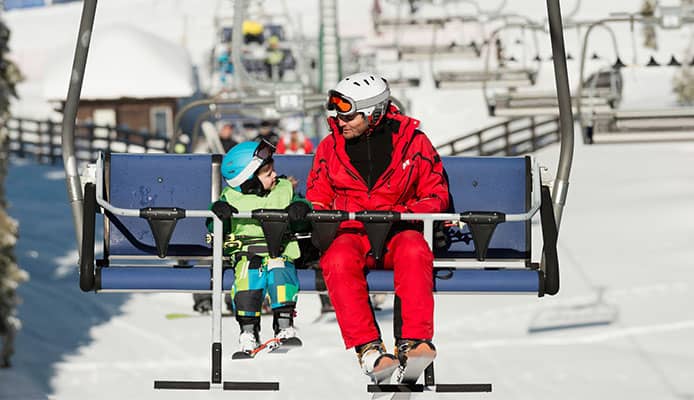 Lifts are nothing new in the skiing world. If you are a snow hobbyist, you have probably used one to go up the slopes.

A ski lift is a unique form of transportation used by skiers and snowboarders to go uphill. It saves you the hassle of hiking up a mountain in both piste and off-piste skiing.

There are three main types of ski lifts namely; aerial lifts, surface lifts, and cable cars (railways). Let’s look into these in detail, shall we?

Aerial lifts are used to ferry skiers while slightly being suspended from the ground. They comprise chairlifts, gondola, funitel, and trams.

An aerial lift is mostly used in mountainous regions where it’s impossible to build roads. It is most effective when crossing ravines and rivers. Here is a list of the different types of aerial lifts:

These are the most common ski lift types. Skiers have to sit on the chair and pull a safety bar to secure themselves.

Chairlifts can carry two to eight passengers. The old non-detachable models carry around two or three passengers while the newer models can accommodate up to four or six passengers in one go.

Gondolas operate on a cable that circulates in a single direction. A single gondola can carry four to thirty people at once.

Skiers can choose to have enclosed cabins that can store their ski gear in outside racks or those with standing spaces.

A gondola is large and skiers can stand in it with their equipment. It protects them from elements such as bad weather and high winds. The most iconic example of gondolas in the United States can be found on Aspen Mountain

A funitel is a type of cable car that is used to carry skiers to a high altitude. It has the potential to carry up to 30 people. A funitel has no seats, which could be uncomfortable for people traveling a long distance. Additionally, it can be tiring for skiers and snowboarders, as they have to carry their skis and snowboards by hand.

In this transport system, passenger cabins are fixed to either one or two cables and one cabin can accommodate more than 100 people. Due to its large capacity, the cable must stop to allow passengers to either board or alight.
One disadvantage of the aerial tramway is that it has a limited hourly capacity and is susceptible to wind disturbance. A good example of ski resorts with the best tramways includes Squaw Valley in California and Jackson Hole in Wyoming. 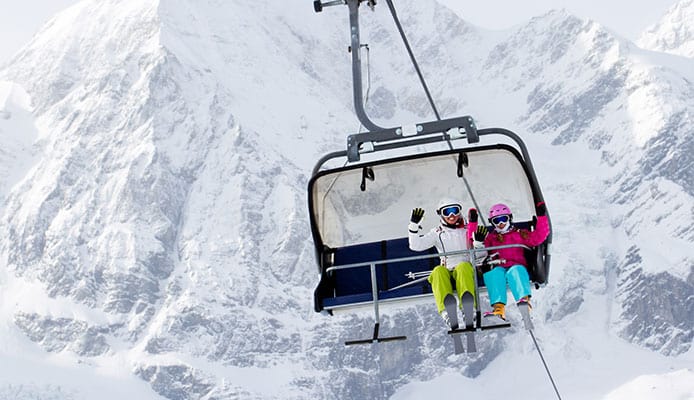 A skier does not leave the ground; they are usually towed up the ground with their skis. Passengers are required to hang onto a support or sit on a seat till they get to their destination.

Surface lifts are effective for short distances or for transporting skiers across one slope to the other. They are not as famous as the aerial lifts and are often recommended for beginners who tour peripheral slopes and small ski areas.

The most common types include T-bar, button lifts, magic carpet, and rope tow among others. Here is a list of the most common surface lifts:

These can carry two people at a go. If you are going to use a T-bar, you will need to be able to hang to the T- shaped support to ensure a comfortable drag up the slope.
One important tip when boarding T-bars is to ensure that one’s back foot is out of the ski bindings when gliding into the loading area. One should also rest their rear foot on the anti-slip pad to keep their balance.

Passengers are advised not to squat too low on the T-bar as they might fall forward if the lift makes an abrupt stop.

The most recognized T-bar in the United States is the Horseshoe Bowl that is used to access Breckenridge Resort in Colorado.

Button lifts are used to carry skiers and snowboarders in areas that are too narrow or up steep slopes. As the name suggests, these ski lift types have button-shaped seats that are usually suspended from a moving cable.

Skiers often hold on to poles as they move up the slope. They are a bit complex to use by beginner skiers. In fact, in some areas, they are only reserved for intermediate and expert skiers.

Magic carpet lifts are much easier to use compared to their button and T-bar counterparts.
They have either seats or handholds hooked to a waist-height moving cable.

Magic carpets have a moving travelator–like a belt that makes it easier for children and adults to board and disembark. Due to their slow speed and limited distance, they are perfect for beginners or when skiing with kids.

Also known as handle tows, rope tows are one of the earliest methods of going uphill. Skiers must position themselves well to give the rope a firm grip. However, they should not shake the rope, as this might affect other skiers moving uphill.
Most times the rope pulling force needs to be counterbalanced by a downhill center of gravity that normally varies according to the slope gradient, surface conditions, and the rope’s speed.
When one reaches the top, they must determine how to release the rope through careful timing, balance, turning, and propulsion, which needs experience.

An example of a ski resort that has a prominent rope tow is Alta Ski Area in Utah that goes between Wildcat base and Albion areas.

Cable cars usually operate on a pulley system and have two cabins. Although they are two with one going either up or down, it can take a while to catch one.

A cable car is recommended for when you are looking for a faster ride up the mountain. It is effective when skiing with a group and wants to travel together. The most common type of cable railway is the funicular.

Funiculars are also known as incline railways and are mostly used on steep inclines. They have the ability to carry a large group of skiers at once.

They are regarded as the fastest means of transport with numerous carriages and the ability to run on underground rails.

How To Get On And Off Ski Lifts

You now know the different types of ski lifts you expect to find in a ski ground, but if you have no idea how to board one, your efforts become futile. Here are a few tips for getting on and off a ski lift that could make all the difference.

People often wonder whether it is safe to ride on a ski lift. Well, using a lift is one of the safest forms of transportation. However, risks such as human and operator errors are bound to happen when machines and people come together.
Despite riding on a ski lift being safe, ski areas cannot always prevent accidents, as people can easily fall off from the lifts if they are not careful. Always observe ski safety to avoid accidents and ski injuries.

Lift attendants are always on standby to caution people against making silly mistakes while riding on a ski lift. Make use of their advice.

Consult with your doctor if you have any medical condition that can put you at risk while on a skiing adventure.

Ski lifts are designed to make it easier for you to move up the slopes. It is therefore important to be aware of the rules and regulations about boarding and disembarking from the different types of lifts if you are planning to use one.

Always ask for assistance from the lift attendant whenever you are not sure about something to avoid making silly mistakes that could put you in harm’s way. Remember to remain calm until you get to your destination. It is also crucial that you make time to learn and perfect the art of getting on and off the lift to avoid injuries. 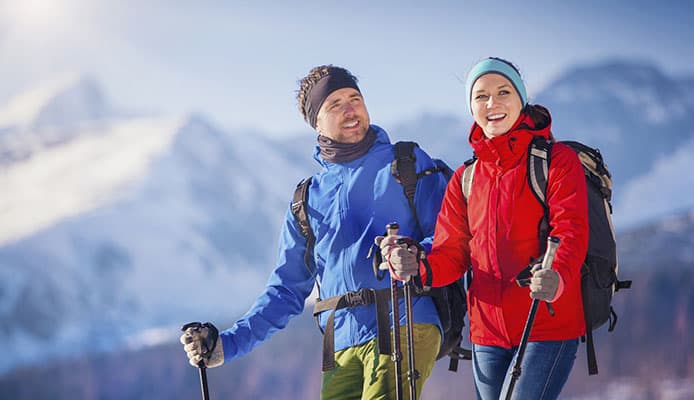 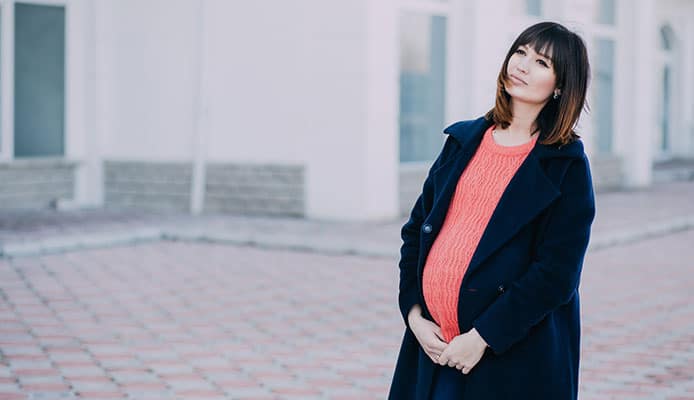 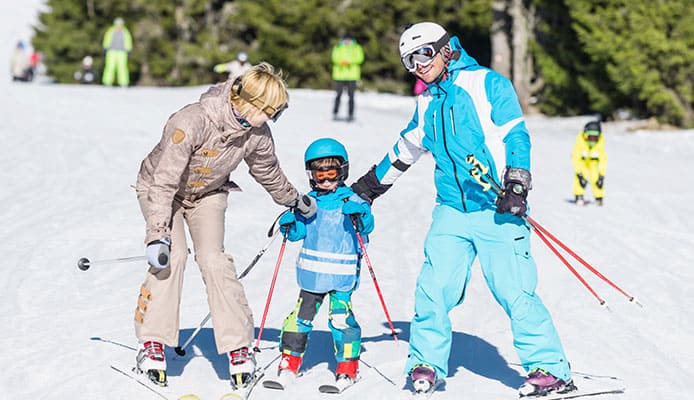