While both snowboarding and skiing are snow sports, they use different ankle and foot movements. The boots worn for the 2 sports will feel and look different. In this ski boots vs snowboard boots comparison guide, we will look at the major similarities and differences existing between the 2 boots.

Ski and snowboard boots are not 100% different. They do have some minor common things. In the market, you will find both boots in pairs – one for each foot. The boots will attach firmly to the ski or snowboard. With both boots, you will have to lock firmly to the base to ensure that your legs stay attached.

Both boots are waterproof, warm, and ensure that your feet stay protected from both damage and snow elements. When you decide to buy snowboard boots or ski boots, you will find both boots in varying sizes for kids and adults. Depending on the quality, both boots will have different price points.

The 2 snow sports will have beginner boots through to the advanced technical boots featuring advanced features, construction, and quality. In both the ski and snowboard boots, you will need to wear socks – this improves the warmth. To achieve a better fit, you have to break into ski boots and snowboard boots.

The more you wear both boots, the more compressed the liners become around your foot profile. This is one of the reasons why you should invest in boots that are not fitted to someone else.

Ski boots are made of hard plastic – the material is very rigid. The inside is usually highly insulated with soft padding made of fleece.

Over the years, ski boots have evolved from leather boots to modern and highly rigid boots. The ski boots have elongated – they now feature improved ankle support, reducing the chances of the skier ending up with lower leg injuries.

The ski boots are designed to lock into the heel and ankle of the skier. This ensures that the movement is transferred to the ski directly.

While the rigid boots do perform extremely well on the slopes, walking on the sidewalk is usually extremely difficult. In most instances, skiers will rush to their lockers to change into their normal street shoes immediately after they are done using their cross-country skis.

Note: Some beginner skiing boots may be more flexible. These use a softer shell ideal for learning.

Note: Some racing snowboard boots may feature more rigidity, much like some ski boots. This improves the precision and control while moving at a high speed.

The boot shell affects the type of bootstraps used. To help you understand why different types of straps are used on ski and snowboard boots, we will compare ski boots vs snowboard boots in terms of the straps. 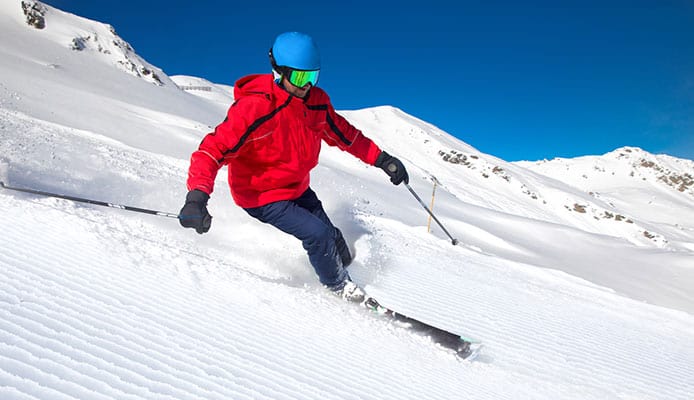 The ski boots feature a hard shell. To snap the hard shell into place and around your foot, these boots have to use strong buckles.

The heel buckle, which is the most important buckle on the ski boot, will lock the ski heel into place and ensure that the foot does not move when you are skiing. The other buckles help reduce the space within the ski boot and also ensure that snow does not get into the boot.

Snowboard boots have a more flexible shell. For this reason, they will feature laces. These are the same laces you will find on traditional boots. The snowboard boots will, however, have a side adjuster – this helps adjust the tightness of the fit.

Skiers use 2 skis, one for each foot. The skis are attached to each ski boot individually. You will have to clip into the skis while facing forward.

On the other hand, snowboarders are bounded to a single board. Their feet face sideways, at an angle to the travel direction.

Skiers can easily click into the ski bindings while standing up. The toe usually goes first, followed by the heel for the lock mechanism to attach to the base of the ski boot.

Skis are meant to detach from the skier during a crash. The skis will detach when they get put under a preset amount of pressure. Different release values are set for varying levels of experience and weights. The release value will make the skis harder or easier to detach.

While well-fitted ski boots may take longer to stretch, they should be comfy. While the pressure may build up over the day and you may have to release a couple of buckles, you should not mistake a bad fit for a snug fit. If your feet are becoming sore too early in the ski day, you may need to confirm that you are wearing the right ski boot size.

After going through this ski boots vs snowboard boots guide, one thing should come out clearly – snowboard and ski boots are different. Unfortunately, even if you love both sports, interchanging the boots is impossible.

The boots are developed to suit the movements and style of the sport. Compared to snowboard boots, ski boots will be more rigid. While the rigidity may make the ski boots tough to walk in, they should be comfortable on the slopes. If the ski boots are too uncomfortable, check to determine whether the boot size is ideal for you. 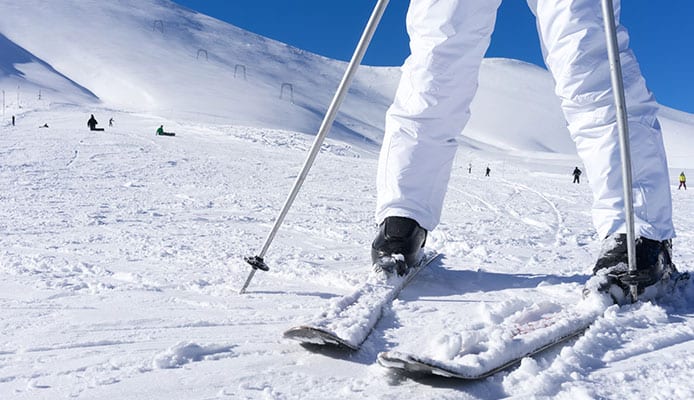 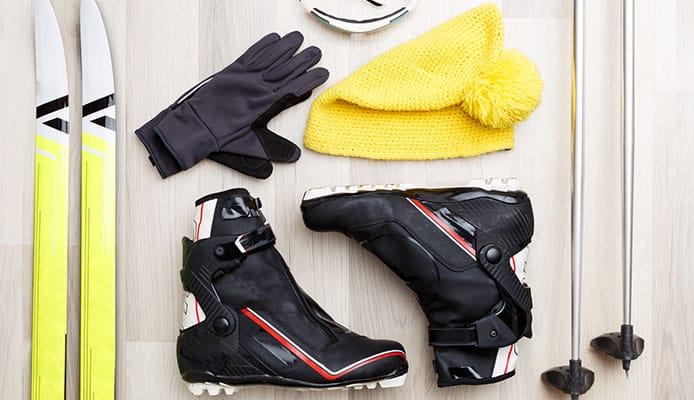