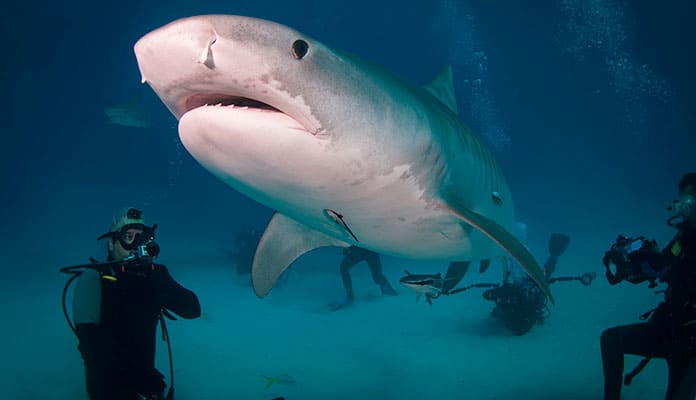 Every year we are seeing more and more people eager to explore and travel even further below the water’s surface. More than just a vacation activity, people are more curious than ever about the big blue ocean and are expanding their dive to spend more time in the water. There are many reasons people are so drawn to diving. It could be the draw of exploring somewhere we know so very little about. Perhaps it’s the plethora of colorful schools of fish. Maybe the beauty of the different coral reefs hiding below the water’s surface. Whatever the reason, we are seeing an ever-increasing number of people taking the plunge into the depths of the ocean.

While it may be an intimidating experience, the real thrill comes from seeing larger fish and mammals that call the ocean their home. From dolphins to the humpback whale many impressive animals are on every diver’s must-see list. The biggest thrill of all being the shark. Getting up close and personal with a shark may excite some but to most this can be an incredibly thrilling, even terrifying experience.

The Not So Scary Fish

Thanks to Hollywood, there is that ever-popular time of year where you learn more than you bargained for about these creatures, Shark Week. Often getting an undue bad rep, these beautiful and majestic creatures often are unduly noted as bloodthirsty killers. Of the more than 480 different species of sharks, only 3 are of true concern. The bull, the white, and the tiger sharks are the only species that pose a great threat and have double-digit recorded murders. The other 477 are beautiful, exotic fish that simply have a bad name. Shark attacks account for roughly six to eight deaths worldwide a year. This is a great contrast to the over 100 million sharks humans are responsible for killing a year. To show contrast, falling coconuts account for 150 deaths a year. So, you are 25 times more likely to get killed by a coconut than a shark. Rather than fear these misunderstood creatures, we recommend making sure your mask is clear, you have plenty of air in your tank, and enjoy this amazing experience.

If you are fearful to dive in the open water freely with these fish, many places around the world offer cage diving. This involves a diver to get in a steel cage and get lowered into the water in an area with a large population of white, bull, or tiger sharks. At this time blood is poured into the water which entices the sharks and makes them come to the cage and fight to break inside.

Many aquariums around the world offer diving with sharks in the monitored areas of the aquariums. This relieves some of the worries in divers as it is perceived as a controlled and safe environment. While this can definitely spark a thrill, nothing beats diving in the great open ocean.

The Best Places for Diving With Sharks 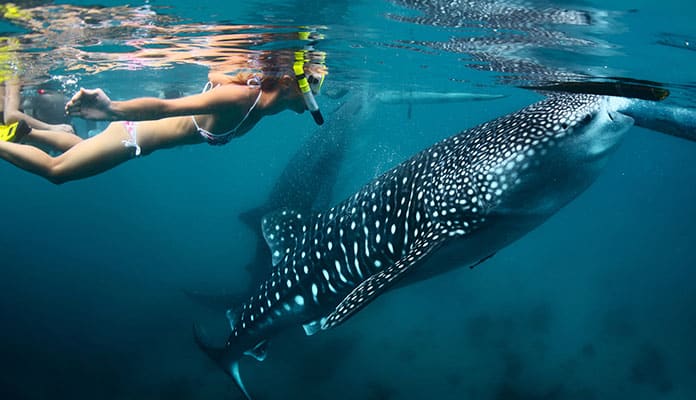 It is possible to encounter a shark in any part of the ocean around the world. However, your chances increase in different areas. When planning your next diving holiday, be sure to consider these must-see areas of the world.

Miami Beach:  Here you will have a medium to high risk with lemon, bull, tiger, hammerhead, and whale sharks. Being scuba certified is required on the common 90 miles northern Miami open water dive.

Belize: A low to medium risk here will have you diving with large whale sharks. Whale sharks may be large in size but they are incredibly gentle in nature. Belize is home to the UNESCO barrier reef, one of the longest in the world. This protected reef is home to many whale sharks.

Philippines: You will have low-risk diving with the blacktip reef sharks found here. It is easy for beginners to spot these gentle sharks if you’re lucky you can even spot them snorkeling.

South Africa: This high-risk area will allow you to see the notorious great white shark. One of the best places in the world to encounter these feared beasts, here you have the option of cage diving.

Australia: Lord Howe Island is an amazing spot on the Great Barrier Reef that is a must-see for divers. A medium-risk, here you will be diving amongst the spotted Galapagos whaler sharks. This area is perfect allowing only 400 visitors at a time which makes it so there is never a crowd.

Sri Lanka: You will find a low to medium risk on the coral reefs of Pigeon Island National Park. Here you will face blacktip reef sharks, a species that enjoys staying close to home. This means you are likely to see many adult and young sharks swimming together. Be prepared to do some fun swimming with sharks.

Tahiti: You can see hammerheads, silver tips, and gray sharks. Rangiroa, an atoll in the South Pacific, is one of the best diving spots in the world. Visibility is 150 feet. This is a high-risk spot for shark diving.

Turks and Caicos: Whale sharks, reef sharks, and lemon sharks are seen here. The risk is medium to high. You can dive with a marine biologist and divemaster.

Cape Cod: This high-risk area is sure to thrill any diver. From blue, makos, great whites, basking, and thresher sharks. Here you can cage dive or go for the real thrill and do an open water dive. Depending on what time of year you may need a wetsuit for diving.

Mexico: An extremely high risk, diving off the coast of Baja, Mexico will have you face to face with a great white in no time. You can take a tour leaving from the Isla Guadalupe.

The Basics Of Shark Diving 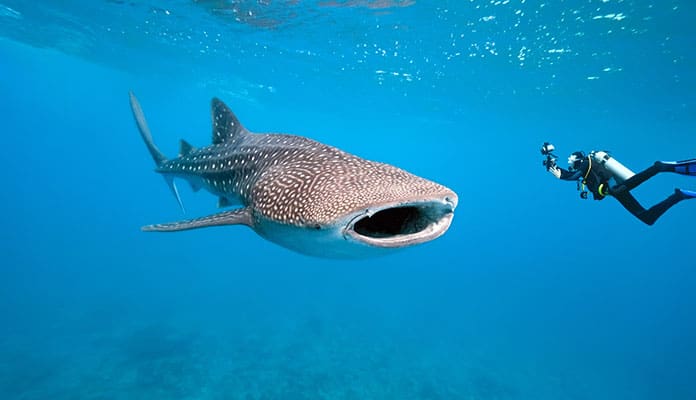 When going diving no matter what waters you are in there are a few key safety rules to know. As there are so many different species of sharks it is important to know that not all sharks look like your typical fish. For this reason, we recommend assuming that all unidentified fish are sharks.

All sharks, no matter the species, are attracted to the scent of blood. As docile and harmless as most sharks are, in the presence of blood their characteristics will change. For this reason, it is important to not bleed in the water. A simple cut can cause some serious undue attention. While not all sharks will get aggressive with the smell of blood, they will become incredibly curious and begin to approach you. Bleeding encourages an aggressive attack and can provoke non-threatening sharks to attack.

If you find yourself under attack from a shark, know that this is not the end. There are many things you can do to escape from the situation. Out of the 60-ish shark attacks worldwide a year, only roughly four are fatal.

Control Bleeding: While it may not seem possible to not bleed when injured, this can be practiced. With extensive practice, it is possible to sustain a serious injury without bleeding. Most importantly, it is important to keep composure. Flailing in the water can seal the deal on an attack. Maintaining composure without jerking your body around after an attack can confuse a shark enough to save your life. Controlling your bleeding can cause the shark to question if their attack has done any damage to you. Controlling your composure can show the shark that it is not a threat to you as its attack has proved ineffective. This can cause a shark to question their potency and can cause them to back off. Remember as with almost any animal attack, staying calm is key.

In turn, if there is any blood in the water with you get out of the water as fast as you can. This can be fellow swimmers, animals, or from any source. This is especially true when diving with more docile sharks. The smell of blood and the presence of thrashing water can prove too tempting for a shark. Docile sharks are inexperienced with attacking and their poor skills can cause them to irrationally attack any swimmer when blood is in the water.

Counter Aggression: Sharks hardly ever attack without warning. Typically you will see exploratory aggression before an attack. This is the time for you to react to show the shark that you are not praying for them to attack. It is important to be alert enough to recognize and respond to this aggression quickly and without fear. The most successful way to counter is by a sharp blow to the shark’s nose. This will almost always prevent an attack as it shows the shark that you are aware of its intention and you are willing to use extreme force.

When fending off an aggressive shark it is important to be aware that most sharks have notoriously bad memories. This can be a danger to skilled swimmers as it can cause a shark to forget the diver’s countered aggression and cause him to attack again. After hitting the shark on the nose be prepared that this may need to be done again. Staying alert is key. Some sharks have longer memory spans than others so being alert is the best way to ensure that you stay safe. Some sharks will understand your intent with one interaction while some may need more reminding.

Swimming with sharks is a thrilling and incredibly rewarding experience. While it may seem intimidating, many shark species are quite docile and misunderstood. While added precaution is recommended underwater, with proper training this can be safe and a lifetime experience. 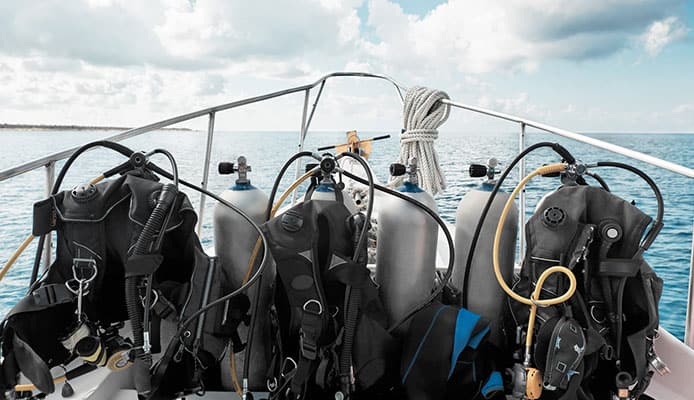 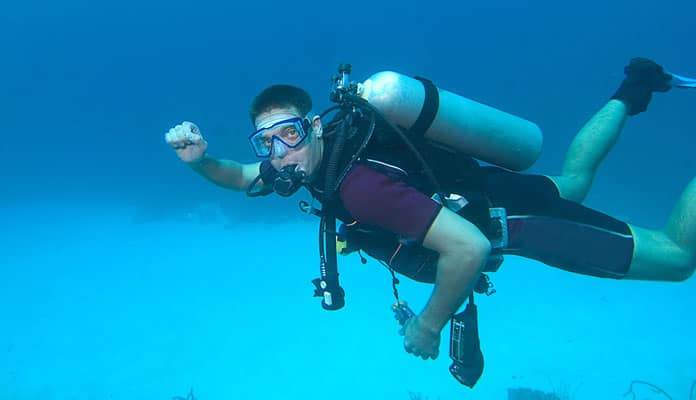 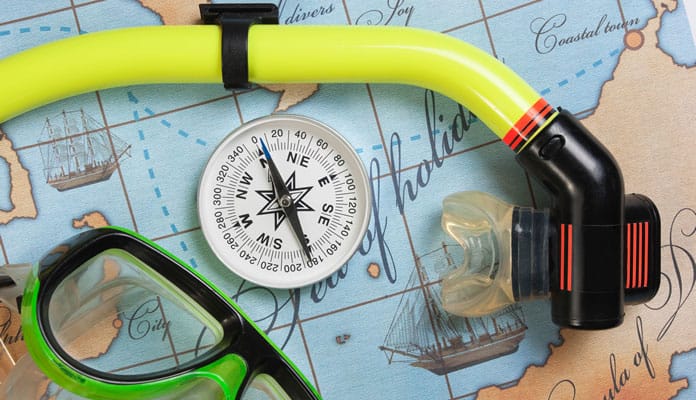