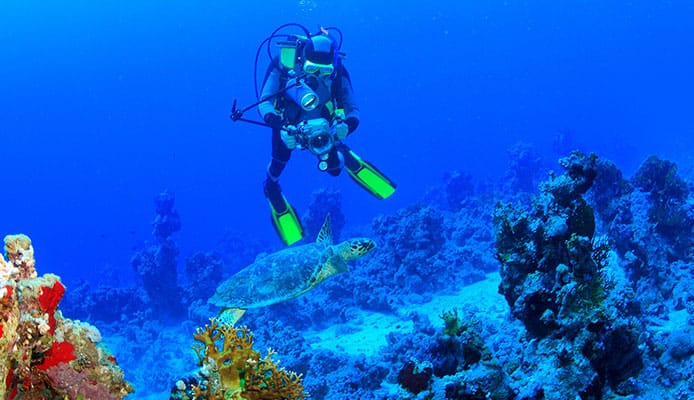 California may be known the world over for its Hollywood, the golden gate bridge plus plenty of sunshine, but there’s even more to the golden state.

Its miles upon miles of coastline are only a telling of what lies underneath the ocean—plenty of incredible and unforgettable diving sites.

In fact, there are dive spots almost throughout the coastline and if you are a dive enthusiast and you have your attention focused on scuba diving in California, then you are about to be blown completely off your feet by how stunning California’s underwater world truly is.

These are the 10 best diving spots in California

This striking California diving spot is found within the Naples state marine conservation area. It is part of a marine protected park situated in the Santa Barbara channel. The most common feature about this dive spot is the sea anemone which covers the walls. You will also swim through the kelp forest and enjoy your time among the shipwreck.

As you do this always make sure that you know the scuba diving dangers and risks involved.

Naples beach’s long reef harbors plenty of diverse marine life including sea lions, yellowtail, and lobsters. It is this diversity that makes it such a great study area for marine biologists.

One of the best diving spots in san Diego is wreck alley. Its name is befitting of what lies under its waters. The Yukon is the most infamous wreck of all with its 366 feet of length. It was a Canadian destroyer that lies 100 feet below the surface.

What is even more interesting is that the Yukon remains intact and is home to a variety of marine life. But the Yukon is not the only wreck here. The Ruby E. is yet another wreck to explore.

Always freshen up on the scuba diving five point descent guide before making the dive.

It’s easy to think that the southeast Farallon islands state marine park is in San Francisco. But being up to 32 miles off its coast, you could argue that it is not technically in San Francisco.

However, it’s important to note that it is a part of the Gulf of Farallones national marine sanctuary. If you plan on California diving in this area then get ready to share the waters with the great white sharks that use this as part of their migration route, as well as sea lions and seals.

In fact, cage diving with your scuba tanks is a popular activity that allows divers to get close to the great white sharks.

With lovers point dive site, you will not have to worry about the light as there is plenty of it down here. Even better is that there will be no need to dive deeper than a few meters to view some pretty amazing marine life.

The water here is calm which allows for clear visibility. Among the dense kelp, you will see some huge crabs and abalone. Other marine creatures that you will definitely encounter are the starfish and some tiny jellyfish.

There are also manentriesry points to lovers point and the waterway is warm making it the ideal diving spot for many divers. It would help to have a good dive watch to keep track of the time you spend underwater. 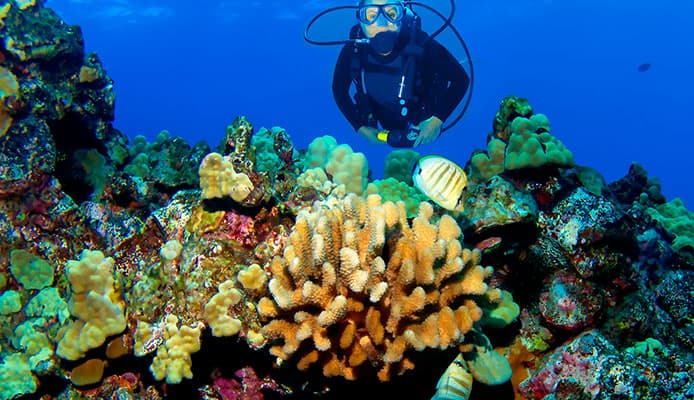 This is one of the best dive spots for the expert diver and may not be ideal for beginners and intermediate divers. Many believe it is the best reef for scuba diving in California. You can spot plenty of invertebrates on the rocks owing to the nutrient-rich cool waters brought by the upwellings.

Two dive sites can be found here. The “Cove” and the “point to the west”.

When planning on California diving, there is no missing Carmel bay with the highway right next to the beautiful stretch of coastline and jagged cliffs that create a scene that could make the perfect postcard.

In the waters around this coastline, there is a hidden world that will leave you in awe. In fact, point Lobos state national reserve has been termed by many a diver as one of the best dive spots in the world.

When looking to access the reserve, you can do so through the Whaler’s corner. Here you will swim through thick forests of kelp and view some amazing colorful marine plants.

Always carry a dive light with you when heading out to point Lobos state national reserve as you are bound to swim through small caves and overhangs where visibility is greatly reduced.

If you are a diver looking for a unique diving experience, then you should consider diving at Santa Cruz island. There is something special to view here as 60 meters down into the water you will see USS peacock, the WWII shipwreck that is over 100 feet in length.

It was designed to sweep mines during the world war but is now covered with beautiful coral and other marine plant life. Here you will also swim through caves, sea kelp and view animals such as dolphins, whales, and other marine life.

Having great scuba fins will help you propel yourself as you take in the sites.

If you are on the shores of LA, then you might just want to dive at a veteran’s park. Here a variety of underwater adventures and sea creatures await you from sharks to octopi. There is also the California halibut and the giant crab to be seen here as well as the bat ray, the blackeye bogy, and the calico bass.

Yet another popular dive site for scuba diving in California is the Avalon underwater dive park in Catalina island. One of its most infamous sights is the flying fish that frequent here. You are also going to see plenty of orange Garibaldi plus plenty of shipwrecks.

This reserve honors the culture of the native Americans and is found at La Jolla Cove. It is a well-preserved park which in turn has allowed marine life to thrive. Swim alongside, octopi and leopard sharks as you capture spectacular images with your diving camera.

California is brimming with plenty of dive sights all offering amazing and unforgettable sights. So, bring your camera with you next time you want to take the plunge in the golden state and take back memories that will last a lifetime.