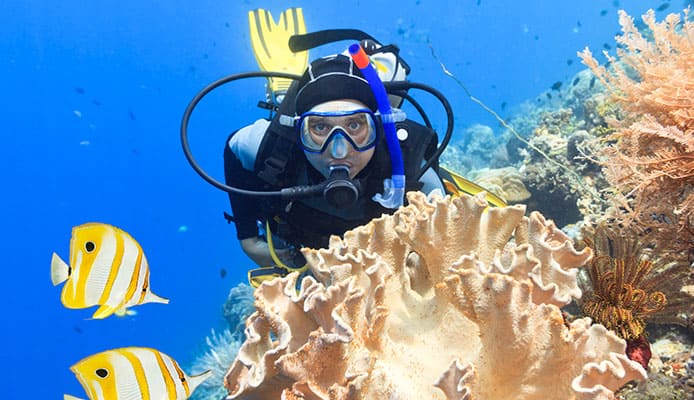 Man has always sought to conquer the world’s oceans. Touring Kayaks, boats, and ships were built to transverse the seas. The man also set out to conquer the underwater world. Understanding his limitations, he came up with all manner of ingenious techniques to help him last longer underwater.

The information gathered over the centuries through trial and error was combined to turn scuba diving into what it is today. Let’s take a look at scuba diving history.

The history of scuba diving

Before looking at scuba diving, let’s consider freediving as this forms the basis of scuba diving. People have been freediving for countries trying to get to tasty treats under the ocean. You could say that freediving has existed for as long as there have been people living near the oceans and seas.

Getting into the water comes naturally to us humans. Consider that during the first nine months of our existence, we develop in an aquatic environment. If an infant is thrown in the water, it will naturally hold its breath for up to 40 seconds and tries to swim.

As we grow older, we tend to lose such abilities. Freediving allows us to re-establish our innate swimming abilities and allows us to hold our breaths for longer and reach greater depths.

A word that you will come across multiple times when freediving is apnea. This is a Greek term that simply means without air. While its origins had nothing to do with freediving or scuba diving, the reason it is so popular with freediving is that the diver uses only a single breath and does not use any equipment.

Scuba diving history also started with ancient swimmers using snorkels. These were essentially hollow reeds. Swimmers could stay underwater for longer by accessing to surface air.  There have also been records of people using bells which they overturned and placed above their heads.

The bells remained usable air for the swimmer. This was as early as the 4th Century BC.

The Persians in the 15th century had already begun using eye googles. They did this by slicing tortoise shells and polishing them.

And in as early as the 16th century, the history of scuba diving saw full diving suits made of leather, and people could dive down to as deep as 60 feet. Scuba tanks were not yet in existence and pipes were used to deliver air to the diver below.

Then helmets started to be constructed out of metal. This allowed them to withstand the increasing pressure at greater depths and drivers could go down even deeper.

Now modern snorkel masks make everything so much easier for swimmers.

It was in 1771 when a British engineer by the name of John Smeaton developed the first air pump. The diver could receive air from the pump which was then connected to the diver using a hose.  Soon after in 1772, Sieur Freminet, a Frenchman, developed a device that allowed the diver to reuse retreated air contained inside the diving barrel. It ended badly for the designer as he had not done enough research on the air pump.

After using it for 20 minutes he died.

In 1825, inventor William James did further research on Smeaton’s work in an attempt to develop a more efficient breather. This self-contained breather had about 450 psi of air and could last a diver 7 minutes underwater.

Yet another Englishman named Henry Fleuss came up with a rebreather that featured a closed-circuit design. Initially, it was created to be used for repair in a flooded ship and was then tested in a 30-foot dive by Fleuss himself. He was also going to face the same fate as Smeaton and died underwater. However, unlike Smeaton who died from a lack of oxygen, Fleuss died from oxygen toxicity.

By the 19th century, research had been done both on scientific and technical sectors in the exploration of the underwater world.  Paul Bert and John Scott Haldane from France and Scotland respectively had done thorough studies on how water pressure affected the body.

These allowed them to figure out the best depth for compression diving. This information also paved the way for the design of the modern scuba tank.

Furthermore, there was also great progress in the scuba diving history with research on dive regulators, air pumps, and carbon dioxide scrubbers. This made it possible for the divers to stay under for longer.

But it wasn’t until 1942 that the world saw an autonomous diving suit as well as a diving regulator. They were both created and developed by Jacques Cousteau, a French naval officer, and Emile Gagnan, an engineer also from France.

Just a year later, they developed and started selling the aqualung.

The problem of high pressure

Of the previous scuba diving equipment that was invented, none of them seemed to take into account the issue of the increasing pressure with more depth. Often the designs involved supplying air to the diver at a constant flow.

The great thing is that modern scuba gear packages are designed with just this in mind.

Inventors still hadn’t come up with a way of storing compressed air. With the turn of the 20th century, however, two designs had come up. The closed-circuit design and open-circuit design.

With the open circuit, the driver was exhaling the gas into the water. The closed-circuit design involved filtering any unused oxygen from the exhaled air to be used a second time.

This design became highly popular with recreational divers.  Divers could go down deeper, and they were much safer than many of the rebreathers made earlier in the history of scuba diving. What’s more, is that they were not very expensive to recreate.

The open-circuit system was first developed in France by Yves Le Prieur in 1925. After a few tests run, it was demonstrated in Paris at a swimming pool in 1926. Among the features of the circuit was a compressed air unit that was carried by the diver on his back. It was then connected to a pressure gauge, which was operated manually.

There was also a continuous supply of air to the mouth

The closed-circuit design was developed around the same time. Since the body will consume just a fraction of the available oxygen the diver will also waste even more oxygen when the gas is compressed.

The exhaled gas is recycled by the rebreather all while replenishing the gas from the tank. This ensured a constant supply of oxygen. Also, the circuit needed to get rid of the carbon dioxide that had been exhaled to prevent breathing distress and hypercapnia.

Modern rebreathers are much more effective.

The very first rebreather was developed by Siebe Gorman back in 1878. It was a mask constructed from rubber and was connected to a breathing bag.

In 1879 Fleuss took his design to the test where he spent more than one hour inside a water tank. After the success, he also dived down to 5.5 meters a week later. He was to meet a tragic end when he died due to a lack of oxygen.

Creation of the diving suit 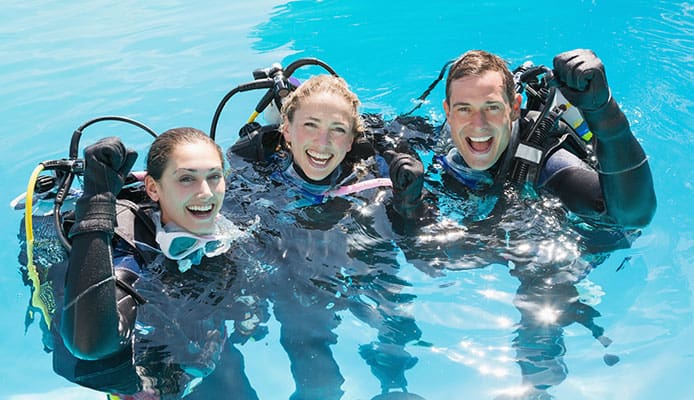 Around the time of the invention of the closed-circuit rebreather, another man by the name of Benoit Rouquayrol and his associate Auguste Denayrouze created the rigid diving suit. It was a heavy suit that weighed 200 pounds. However, its main advantage was that the air supply was much safer.

Later in 1921, it was the infamous magician Harry Houdini who developed a diving suit. The suit itself was called the Houdini suit which took inspiration from his escape stunts. Divers could very quickly slip in and out of the suit.

The invention of the dive computers

Initially in the history of scuba diving, divers used a dive table that was meant for divers who received surface air through a hose. They quickly discovered how inefficient the table was especially when the diver needed to make multiple dives at different depths.

The first analog dive computer was developed by the Foxboro company. It was named the Foxboro de computer Mark 1. It was then tested in 1951 by the US experimental diving unit.

However, it had some errors which resulted in the US Navy developing its dive table.

It wasn’t until two years later in 1959 that the Italians came up with what they called the decompression meter. Electronic computers had not been developed as of yet. While there were several models of analog dive computers that followed, it wasn’t until the 1980s that saw the arrival of the electronic model.

The Hans-Hass Decobrain was developed by a Swiss company and was the first electronic dive computer.

Modern dive computers are far more accurate and sophisticated than this earlier version.

Recreational diving in the history of scuba diving saw its most growth and popularity near the end of the 20th century. Ever since there have been more and more people enrolling for scuba diving courses. Back in 2012, up to 1 million scuba divers enrolled for the classes.

One thing about scuba diving is that it is dynamic. There are new developments and more improved technology that comes out which makes diving much more efficient including better dive suits.

Even while many people enroll for scuba diving courses, there also a high dropout rate and only a few will end up becoming regular divers.

The need for recreational scuba training

Initially, a recreational diver would be trained informally. However, there was a high rate of diving accidents which led to the development of certification agencies. These include BS-AC, NAUI, CMAS, and PADI.

After and even before world war II, many snorkelers and spearfishermen took on scuba diving as a whole new way to spend more time underwater. Once Cousteau and Gagnan developed the aqualung, it was available for sale to individuals who used it for sports purposes.

Caves have always fascinated mankind and those found under the sea are no exception. Cave divers have been around long before the invention of the open circuit and closed-circuit scuba systems.

Divers used to receive air through a hose from the surface as they explored underwater caves and caverns. During this time there were no dive compass and divers needed to find their way back.

However, the UK and the USA had the most influence on cave diving methods, equipment, and techniques due to the varied underwater topography.

For one, water temperature also had to be considered. In the UK for example, water is often 40C or below. This means that the gear had to accommodate this and be able to keep the diver relatively warm.

Back in the 1970s, many people wanted to try out cave diving especially in Florida in the US. Since there were no formalized training programs, over 100 deaths occurred. The state of Florida almost banned diving around caves.

Then seeing a need for it, there were cave diving organizations that were set up to promote the sport. It also ensured there were no more fatalities when people tried to access the numerous caves found in Florida waters.

Now divers can grab their dive lights and easily explore the caves.

There are several items and gear that constitute scuba diving equipment. Each unit has been researched and improved over the scuba diving history to result in a better diving experience. What’s more, is that diver is much safer now when underwater. It’s important to ensure that you take a scuba diving course with any of the world-renowned organizations. You will get your certificate and become a proficient diver.