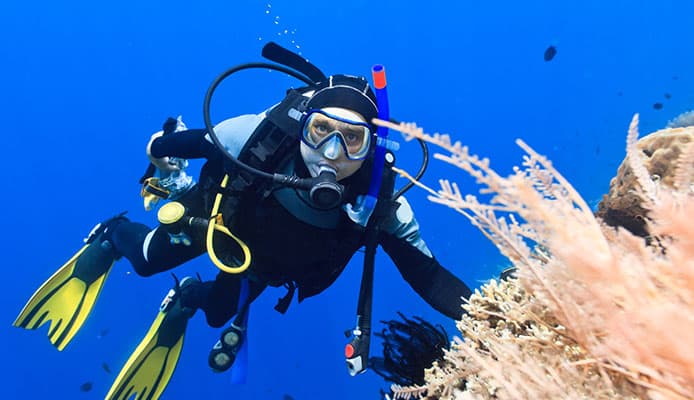 For years, the wrecks and rich marine life in the Red Sea have been major attractions for those who prefer water over land. The Red Sea features approximately 500 hard and soft coral species, about 1000 fish species, 44 shark species, and numerous invertebrate reef dwellers. The sea is one of the 7 wonders of the underwater world.

Located on the Sinai Peninsula, Sharm el-Sheikh is one of the top-rated Read Sea diving spots. The diving spot features a tropical climate and exciting nightlife. If you get tired of underwater navigation in this Red Sea diving spot, you can enjoy relaxing on lush sandy beaches.

After grabbing your best scuba tank, some of the dive sites you may want to explore include The Point, The Light, Shark’s Bay, and The Tower. The Point and The Light dive spots feature 130-foot drop-offs, numerous pelagic fishes, and multitudes of reefs.

Shark’s Bay features a shore entry dive site. This site has a deep canyon offshore and displays a sloping reef. The site is famous for the manta rays.

If you head south from the Na’ama Bay, you should find The Tower dive site. This site features a 196-feet drop-off. The Red Sea diving spot is frequented by ghost-pipe fish and sea horses.

Even if you have already invested in the best scuba gear for kids, scuba diving with your kids at Sharm el-Sheikh may not be a good idea. Some of the diving sites do experience strong currents. This makes the sites unstable for beginning scuba divers and kids.

This dive spot is not just the first national park, it is also the best-kept park. When planning to go diving in Egypt, Ras Mohammed should be on the list of Red Sea diving spots you intend to visit.

Surrounded by numerous fridging corals that emerged after the coastline changed approximately 70,000 years ago, Ras Mohammed is characterized by numerous vertical overhangs that go to a depth of approximately 100 meters. The spot has approximately 20 dive sites. One of the most popular dive sites is the Thistlegorm Wreck. If you learn how to take pictures underwater and also bring your best diving camera, you should be able to take nice pictures while exploring the wreck.

The wreck has a lot to offer, both inside and outside the 400-foot-long container ship. When the ship went down, it was filled with trucks, motorbikes, and rifles. Numerous sea creatures have already made the wreck their home. Some of the most common sea creatures you may come across include hammerheads, trevallies, napoleon wrasses, and jacks.

The Brothers Islands, which are also referred to as the El Akhawein, are a pair of small islands located approximately 5 minutes from each other. The islands feature strong currents, a wide variety of marine life, and 2 wrecks.

Deep walls surround Little Brother Island except for its northern point. On the northern point, the reef slopes slowly before dropping to a deep plateau at about 40 meters. Grey reef and silvertip sharks do frequent this plateau. While exploring Little Brother Island, you should be able to see schools of barracuda, dogtooth tuna, soft and hard corals, and the mammoth gorgonian fans.

If after wearing your best dive computer you decide to explore Big Brother Island, you should expect to come across anthias, sweepers, glassfish, and sharks. The site also features 2 wrecks that lie close by.

The Numidia sunk in 1901 while carrying 2 locomotive wheels. The 130-meter-long British cargo ship lies in only 8 meters of water. The second wreck, The Aida, sank back in 1957. Armed with your best lens for underwater photography, you should be able to take some nice pictures while navigating the 75 meters transport supply ship. The ship’s stern lies at 60 meters deep while the bow rests at 30 meters.

Dahab, which means Gold, is one of the best spots for diving in Egypt. The Red Sea diving spot features abundant marine life and well-preserved reefs.

Among the top-rated Dahab dive sites is the Blue Hole. The most popular Blue Hole entry is an open chimney referred to as The Bells. Divers exit this chimney at a depth of approximately 26 meters and continue to dive along the Blue Hole wall.

Another ideal Dahab diving site is The Canyon. The dive site starts at its round bowl which features numerous glassfishes. The Canyon descends to approximately 50 meters as a tube. Numerous escape points are available at different depths.

Some of the sea creatures you may come across include lionfish, angelfish, surgeonfish, and parrotfish. You may also come across Napoleon fish, different shark species, and turtles. While dolphins are often spotted in Dahab, encountering them underwater is more difficult. If you would like to have fun with the dolphins, you can consider snorkeling with glasses close to the shore. 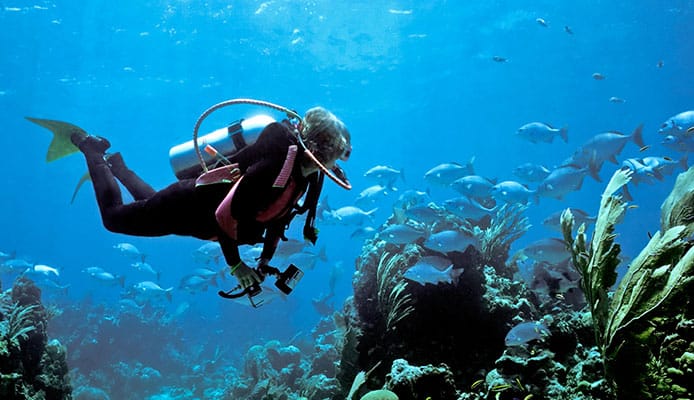 When diving in Egypt, most divers do visit the Alexandria diving spot. This Red Sea diving spot has a lot to offer. If you decide to explore the Eastern Harbor, close to the shore, you will be able to discover ancient ruins from the Romans, Greeks, and the pharaohs.

If you love to explore underwater cities, you shouldn’t leave this Red Sea diving spot without checking out Cleopatra’s Underwater City. This city is full of Roman columns and sphinx statues. The city was built by Alexander the Great in 300 BC. The city collapsed into the Red Sea after an ancient earthquake.

To the east of Alexandria, you should be able to find a couple of wrecks. These Napoleonic-era Battle of the Nile wrecks are an ideal diversion for the advanced divers. If you are a beginner, you can consider checking out the world war II airplane wreck which lies in the shallow waters.

If your goal is to check out the marine life, you can consider diving to the east of Alexandria. While navigating the eastern side with your freediving fins, you may come across eagle rays and white-tip reef sharks.

Elphinstone Reef, which is also referred to as the Sha’ab Abu Hamra, is one of the spots for diving in Egypt you should explore. The reef is approximately 984 feet/300 meters in length. It has an average depth of approximately 20 to 40 meters (60 to 120 feet).

The reef does feature great visibility. When wearing your best scuba mask, you should be able to see clearly to a depth that ranges between 20 and 30 meters (60 to 100 feet). This is quite impressive. On both sides of the reef, spectacular walls drop to a depth of approximately 328 feet or 100 meters.

The spot for diving in Egypt features strong currents. This makes it an ideal destination for people who enjoy drift diving. The water temperature in this Red Sea diving spot ranges between 26 and 30 degrees centigrade throughout the year. Hence, you can enjoy scuba diving all year round.

Some of the marine life you may come across include gray reef sharks, white tip reef sharks, oceanic whitetip sharks, groupers, barracuda, angelfish, sea whips, morays, and anthias. Also, corals, sponges, and huge gorgonian are available in this spot.

This spot for diving in Egypt is an ideal destination for people who love to explore virgin dive sites. The Red Sea diving spot features several wrecks which you should be able to explore with your underwater dive light.

Of the discovered wrecks, SS Scalar is the most popular. SS Scalar was a Shell Oil tanker. It was sunk by the German warplanes while it was already anchored to an oil production area. The bow and stern lie at approximately 10 to 12 meters (30 to 38 feet). It is still possible to view the ship’s 3 boilers in its aft compartment.

Additional shipwrecks you can explore while navigating Ras Gharib include MV Aboudy, MS Bakr, and SS Turkia. Both the MS Bakr and the SS Turkia were sunk by warplanes while the MV Aboudy sank in a violent storm.

The temperatures in Ras Gharib favor diving all year round. The temperatures range between 22 and 28 degrees centigrade. When exploring this Red Sea diving site in your best wetsuit, you should be able to see up to a depth of approximately 60 feet (20 meters).

8. El Gouna and Strait of Gubal

El Gouna has sites for both beginners and advanced divers. The spot for diving in Egypt has approximately 40 dive sites. Of these sites, the most famous site is the Abu Nuhas, which is also known as the Ship Graveyard. The most famous shipwrecks you may find on this site include Carnatic, Ghianna, and the Chrisola.

The Straight of Gubal gives you access to over 30 dive sites. The sites feature both healthy reefs and some of the best wrecks. Some of the wrecks you may explore on this site include Dunraven, The Rosalie Moller, and the Kimon M.

If you decide to clear your scuba mask and explore the Safaga and Makadi Bay, your reward will be steep walls, coral gardens, and shallow reefs. Several controversial wrecks add intrigue to the Red sea diving spot.

The northern side of the Makadi bay has a maximum depth of 25 meters (75 feet). It ends with a drop off from a plateau. Some of the marine life you may come across include sharks, turtles, morays, and mantas.

At Safaga, you should be able to explore Salem Express which sank back in the early 1990s while carrying pilgrims who were returning from Mecca. Penetrating the wreck is forbidden. The site does have some other wrecks. In addition to the wrecks, Safaga features fantastic coral reefs, including Panorama Reef and the Seven Pillars.

These dive spots feature uncrowded dive sites, abundant marine life, and crystal clear visibility. St. John’s features a healthy reef system. After wearing your best dive boots, you can explore the Habili Gafaar and Habili Ali reefs. These reefs feature numerous corals and a wide variety of pelagic fishes. If you are lucky, you may come across hammerhead sharks.

If you do love drift diving, you should visit Zabargad island. The island is surrounded by coral-filled slopes and pinnacles which are ideal for drift dives. At a depth of 24 meters (79 feet), Zabargad island features a 75-meter (245-foot) shipwreck, which is generally referred to as the Russian Wreck.

Rocky Island features walls that drop into the deep sea that surrounds the island. The dive site features fans, numerous corals, and gorgonians. The currents present in the dive site attract pelagics such as hammerheads, dolphins, turtles, manta rays, and reef sharks.

Egypt is home to some of the best Red Sea diving spots. The sites feature shipwrecks, healthy reefs, and abundant marine life. Irrespective of whether you have scuba diving experience or you are just getting started, you should find an ideal spot for diving in Egypt.

It is crucial to note that some of the shipwrecks in the Red Sea are only accessible to advanced divers. It is always a good idea to explore shipwrecks suited to your diving experience. This will help you stay safe. 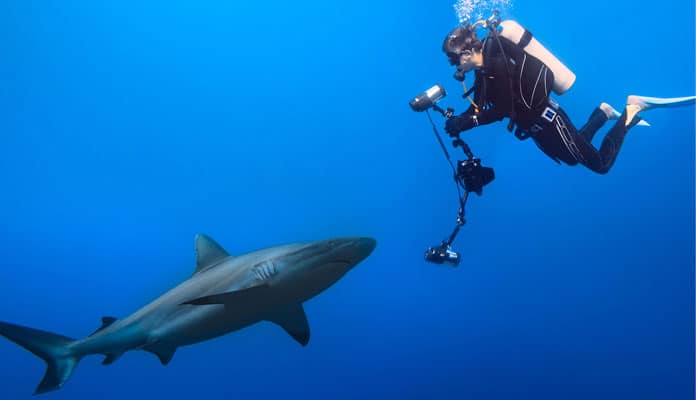 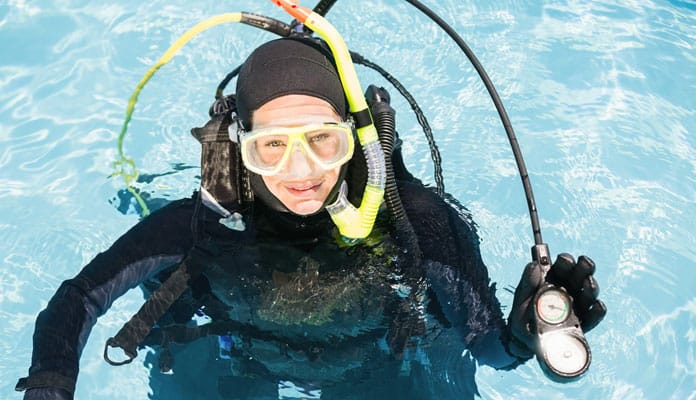 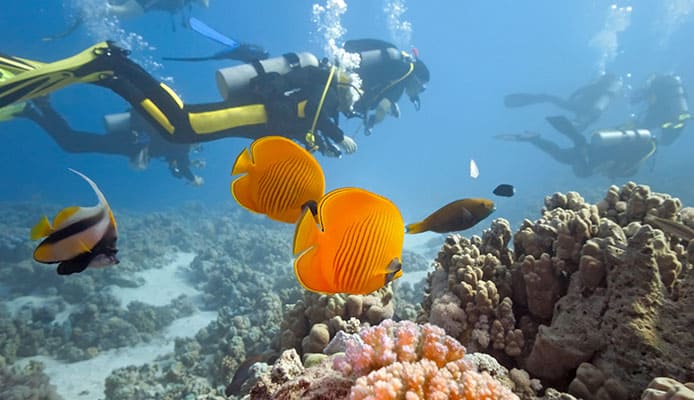