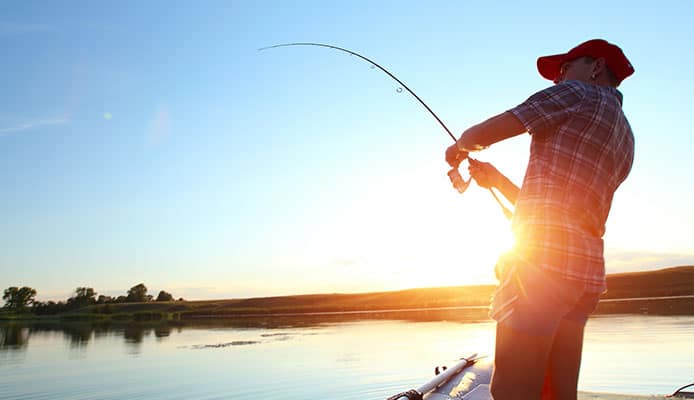 If you are looking for an ideal opportunity to test your fishing skills, going after the rainbow trout may be a good idea. Although the fish is not as aggressive as the brook and brown trout subspecies, it features sharp senses.

The Rainbow trout, whose scientific name is Oncorhynchus mykiss, is available in a wide variety of subspecies. However, you are more likely to catch the rainbows or the steelheads on your fishing trip. In this article, we will be focusing on showing you how to catch these 2 subspecies.

Rainbow trout, especially the breeding males, feature a pink to red stripe that runs their speckled and sleek bodies. The fish subspecies is native to the North West region. However, it has been introduced into the cooler climates. With the goal of ensuring that fishable numbers are maintained, the fish is usually stocked in some places.

You will have a high chance of landing the rainbows if you are casting your spinning rod in streams featuring gravel bottoms and fast waters. It is also possible to catch rainbows in lakes featuring cool waters.

Although the rainbows are largely cool-climate fish, some strains are capable of thriving in warm waters. This allows the fish to thrive further south when compared to the brown and brook trout subspecies.

When using your fishing line in the streams, you should expect to land rainbows whose weight ranges between 1 and 5 pounds. The stream rainbows reach an average of 15 inches in length.

When fishing in lakes, you may need a stronger braided fishing line considering that the lake rainbows can weigh as much as 3 to 8 pounds. The lake rainbows grow to about 26 inches.

The steelheads spend much of their lifetime in the sea. They are what fishing experts would refer to as the anadromous rainbow trout form.

They, however, start and end their lifecycle in the rocky streams. After being hatched in the freshwaters, the steelheads generally spend a couple of years in there before migrating to the sea where they feed until they reach maturity.

Despite spending much of their life out in the sea, the steelheads are capable of returning to the same stream where they originated, to spawn. This is made possible by their strong sense of smell.

If you would like to land the Steelheads during the spawning period, you can take advantage of either the Winter run (between November and April) or the Summer run (Between May and October) spawning cycles. Both spawning cycles bring the steelheads to the freshwaters where you can target them.

When compared to the rainbows, the steelheads are generally much bigger. They are capable of growing to about 45 inches and weighing 55 pounds. Average steelheads, however, weigh about 7 pounds.

Understanding what the rainbow trout feeds on is the key to making rainbow trout fishing much easier. Similar to the majority of other fish species, the young rainbow trout usually begins its life with a diet of zooplankton. The fish later moves on to airborne and aquatic insects. In addition to insects, the fish is fond of crayfish, snails, and leeches.

Lures Ideal for Rainbow Trout Fishing and How to Use Them 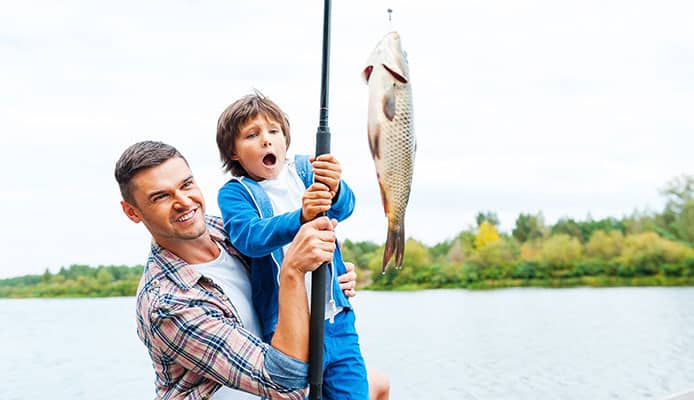 If you are aiming at catching rainbow trout in the shallows, your fishing kayak should be ready just after ice-out. One thing that makes rainbow trout fishing easier during the early spring is the fact that a wide variety of prey items will be pulling the rainbow trout towards waters featuring a depth of fewer than 10 feet.

The fish gets active on the initial sunny days when the water opens. After grabbing a working fish finder, the ideal type of fishing line, and other fishing gear you may need, you should target the tops and edges of live weed beds.

The ideal in-line spinner should feature a life-like color combination, vibration, a spinning blade, and a fluttering action which the majority of rainbow trout find irresistible. To increase your chances of catching rainbow trout and also avoid tangles, you should pitch the spinners with a swivel.

If you intend to use river spinners, you should head upstream with your trout spinning reel. After casting upstream, you should retrieve to keep your spinner afloat and ahead of the current. The fluttering blade will create a lot of flashes which should trigger the rainbow trout to strike.

While working your lure toward you, it will reach a point when you will turn it across the current. At this point, slowing the retrieve will be necessary.

A combination of the slip float and the tube jig is ideal for when you are planning to go rainbow trout fishing in either summer depths or the spring shallows. The slip float makes it possible for you to control the depth of the rainbow trout lure with precision. When compared to the standard bobber, it is more castable.

After figuring out the depth at which the rainbow trout is holding, all you will have to do is set the trout to dangle the jig above the fish species. Next, you will need to hold on. If the trout are currently at the bottom, 8 to 10 inches should be enough. The fact that the rainbow trout is capable of feeding upward makes dangling the jig above them an ideal option.

These perform much better when you pop them on pools, eddy, and lakes. Both the steelheads and rainbows feature a fine color perception and outstanding vision. By using more realistic looking lures, you will be increasing your odds of catching rainbow trout.

When rainbow trout fishing on brighter and clearer waters, using realistic colors increases your chances of catching rainbow trout. The ideal colors you should consider sticking with include golds, silvers, grays, blacks, and whites.

You should throw lures whose colors are similar to those of the preys available on your favorite fishing spot. As the fishing depth increases, you will need to rely more on the metallic glitter and black.

2. Use Bright Fluorescent Colors and a Flashing Blade

A combination of bright fluorescent color and a flashing blade can help you attract the attention of the rainbow trout much more easily. These additions work in both streams and lake drop-offs.

Irrespective of whether you are throwing soft baits or lures, vibration is often a necessary part of landing the rainbow trout. When choosing lures, you need to invest in small and realistic crankbaits or in-line spinners.

With soft baits, invest in fluked minnows, tube jigs, and worms. These generally wriggle when you work them. This usually sends vital information to the rainbow trout lateral line.

Rainbow trout features a strong sense of smell. This makes sweetening the lures with attractants a good idea. You should also consider using scented soft baits.

To new fishermen, catching rainbow trout is not generally very easy. However, by learning what makes the fish tick, studying its feeding habits, and the ideal places where you can find it, you will be increasing your odds of landing the fish.

In this article, we have shown you the best lures and baits you can use when rainbow trout fishing. While these lures have been tested and proven to work, you can test new baits and lures to see if you can find something that helps you achieve more success. 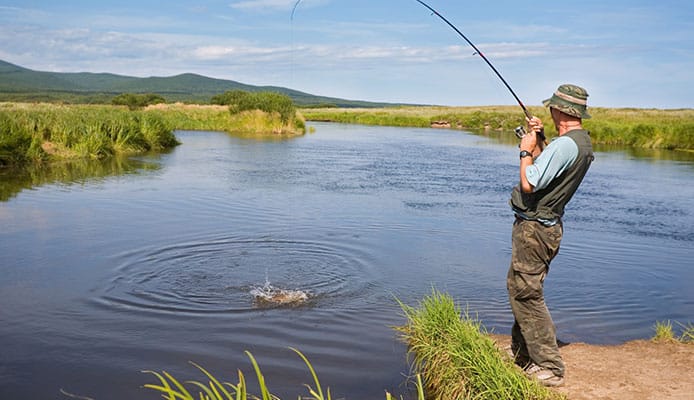 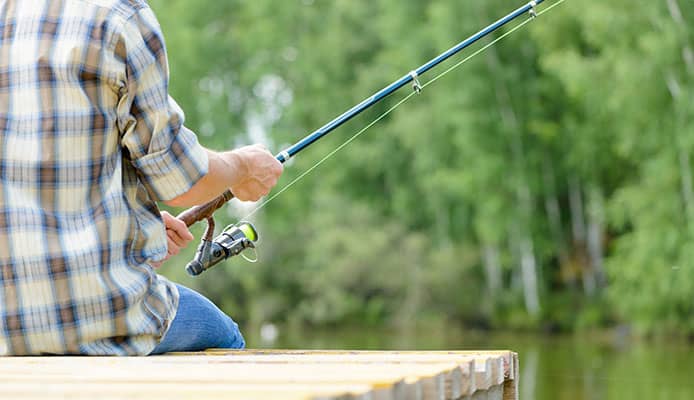 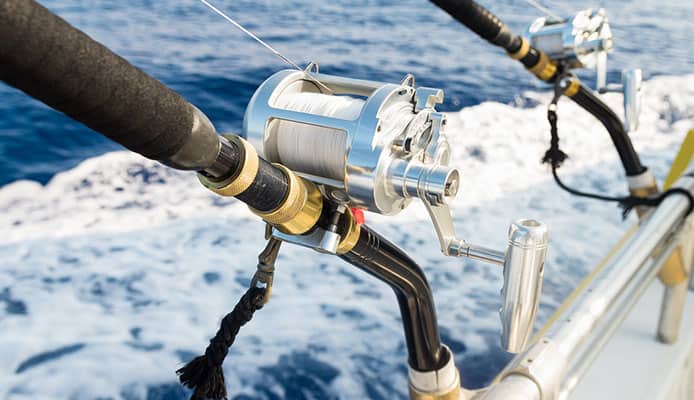