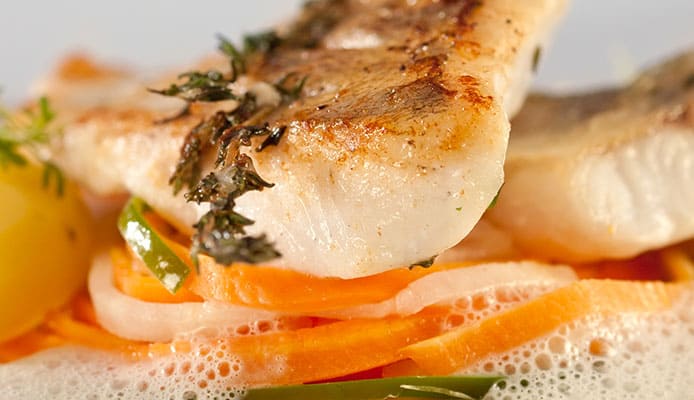 Pike is not among the most popular fish choices, but that doesn’t mean it should be avoided. On the contrary, introducing northern pike recipes into your cooking routine is a great healthy alternative for typically used fish.

In case you are looking for a nice way to spice up your cooking, you’ve come to the right place. We have prepared the best pike recipes that will go with any occasion and delight anyone who tries them. Keep on reading to find out how to prepare mouth-watering pike dishes.

Heat the pan over medium heat and cook the bacon until it is crispy. Remove the bacon when ready, making sure you leave the fat. Put the leek in the pan and cook for 3 minutes. Add the garlic and cook for one minute. Add the tomatoes and cook until soft.

Next, add the capers and bacon. Season to taste and set aside.

Preheat the oven to 375 F. Season the fillets. Heat 2 tbsp of olive oil using medium-high heat. Cook the fish for 4 minutes until light brown. Flip the fish and put it in the oven for an additional 5 minutes. The fish is ready when the edges are crispy and when it is golden brown.

Serve with the tomato and bacon mixture on the side or top. Sprinkle with green onions and chives and amaze everyone with your cooking skills.

Cut the pike into 6 even pieces using a fillet knife. Mix parsley, oil, Worchester sauce, lemon juice, hot sauce, and salt. Cover the fish with the mixture. Marinate for one hour. Drain then set aside.

Grease the broiler basked and place the fish in it. Season with salt. Grill for 6-8 minutes over medium-high heat. Cover with marinade. Turn the fillets then cook them for 5 more minutes or until they flake easily. Sprinkle some paprika on top and serve immediately.

Oil the saucepan, then add onion, pepper, and garlic. Cook until lightly brown. Add every ingredient except fillets. Cover the saucepan and let it simmer, stirring from time to time. When the mixture thickens, add the fillets and let it cook for around 10 minutes. Serve with fresh bread or steamed rice and enjoy!

To make one of the tastiest pike recipes, place pine nuts, basil, and garlic in a food processor and process until coarsely chopped, slowly adding olive oil. Add the salt, pepper, and cheese until everything is mixed, then set it aside.

Mix the oil and vinegar and place the diced tomatoes in the mixture. Let it sit for about 30 minutes. Season with salt and pepper, then set it aside.

Preheat the oven to 350 F to make one of the best northern pike recipes. Season the fillets to taste and drizzle with oil. Let them bake in the oven until flaky.

Spread ½ tsp to 1 tsp of pesto on each fillet. Place the fillets on pasta, put the diced tomatoes on top, and serve with crusty bread. Bon appetite!

To make one of the appetizing northern pike recipes, you need to preheat the oven to 360 F. Chop the pepper, carrots, and onions. Thinly slice the garlic, tomatoes, and lemon. Transfer them to a large dish, then add pepper, lemon slices, and bay leaves.

Put the stock, wine, and tomato paste in a bowl and mix until smooth. Pour the mixture over vegetables and bake them for 30 minutes.

In the meantime, cut the fish into 2-inch thick pieces. Put the fish over the vegetables and bake for 25 minutes or until it is flaky. Sprinkle with parsley and enjoy.

If you’re running out of pike recipes, you will surely love this one. Start by cleaning and scaling the fish. Melt the butter and mix it with breadcrumbs, eggs, green pepper, onions, celery, cayenne pepper, mustard, and crab meat.

Preheat the oven to 350 F. Stuff the pike with this mixture, and place it in an oiled baking dish. Put the bacon over the pike and bake for 40 minutes until flaky. Serve immediately and enjoy.

Heat the oil in a pan. Fry the spices for 20 seconds. Add the Indian spice paste with ¼ cup of water and fry until the water evaporates.

Add the fish to the sauce and cook for another 10 minutes or until it starts flaking. Serve with basmati rice and coriander.

Mix 2 tsp of tapenade with rice, and then pour the water over to make one of the most appetizing pike recipes. Let it boil while you dice the tomatoes.

Mix the tomatoes with 1 tbsp of oil and 1 tbsp of red wine vinegar. Season with salt, pepper, and basil.

Cut the pike into four equal slices and place them into the rice. Lay the tomatoes over and cover. Boil for around 10 minutes, or until the rice is ready. Remove the lid and continue cooking for 2 more minutes.

If you’re in the mood for experimenting, this is one of the northern pike recipes for you. You should transfer the pretzels into a plastic bag and break them into crumbs.

Beat the sauce, beer, and eggs in a bowl. Cut and dry the fish. Place the pieces into the egg mixture, and then put them in the pretzel bag. Shake until they are completely covered. Put the strips on a baking tray and place them in the fridge for 20 minutes.

Heat the oil using medium-high heat. Cook the pike strips for at least one minute until golden brown. Make sure you turn them once halfway through.

Slice the potatoes and boil them. Drain them and set them aside.

Grease the baking tray and let it heat over medium heat. Add the sliced bacon, spring onions, carrot, and parsley. Cook until vegetables become soft. Add the flour. Next, slowly start adding the milk, making sure you are constantly stirring.

Once the sauce is thick, add the peas and the spinach. Then, turn off the heat and add the pike. Pour a bit of water and stir well. Add the feta cheese.

This is one of the best northern pike recipes to prepare while you’re out fishing. Prepare the ingredients at home and then just wait in your fishing chair until you’ve caught the pike.

Make sure you get a specifically designed pike lure to catch the fish. When you’re done, heat a pot over an open fire or stove. Add some oil and sauté the vegetables until tender. Add the soup, potatoes, and water. Bring the mixture to a boil and season to taste. Reduce heat. Cut the fish into small cubes and place them into the pot. Cover and let it cook for around 25 minutes. Serve with bacon on top.

Preheat the oven to 400 F. Drizzle the fillets with oil, season to taste, and place skin side down on a baking sheet.

Roast for 15-20 minutes, or until the fish starts to flake. Drizzle with more olive oil and serve with lemon wedges. 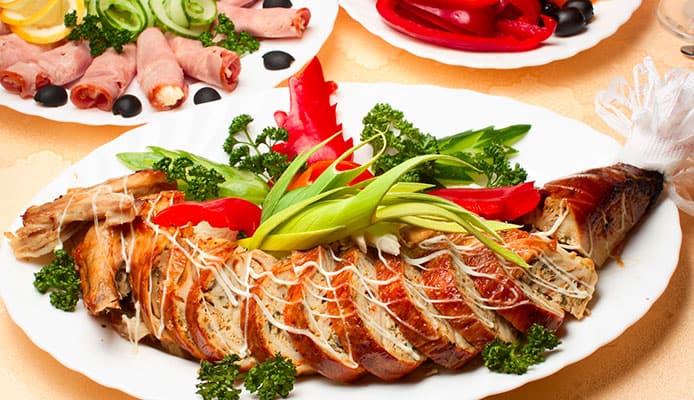 A: Pike is actually a very delicious fish if prepared appropriately, contrary to popular belief. Just make sure you don’t undercook it. Season the pike with fresh herbs or combine it with different sauces and enjoy the taste.

A: Yes, pike fish tastes good no matter how you choose to prepare it. Even though it is not among the most popular types of fish, pike can be very appetizing if cooked correctly. Make sure you follow the recipe to create an amazing pike dish.

Q: How Do You Make Pike?

A: Pike is a bony fish, so you should pay special attention to the bones in case you’re not using fillets. You can make it using many different techniques, such as roasting, sautéing, grilling, frying, etc. Once the pike starts flaking, it means it is ready.

A: Even though it is not the most popular choice, the pike is actually one of the healthiest fish options out there. It has a lot of benefits and is recommended for a balanced diet. It is low in fat, but high in protein and Omega 3 fatty acids.

Pike is often overlooked, even though it is actually very healthy and it tastes delicious. Our ultimate pike guide is a good replacement for the typical fish dishes. You can prepare it in many different ways, no matter if you’ve recently caught it or bought the pike fillets at a store.

You can serve the fish with your favorite sautéed vegetables, fresh herbs, lemon wedges, or even rice. The possibilities are truly endless. All you need is to gather the required ingredients and some time for preparation. Bear in mind that the fish is ready once you can easily flake it with a fork. 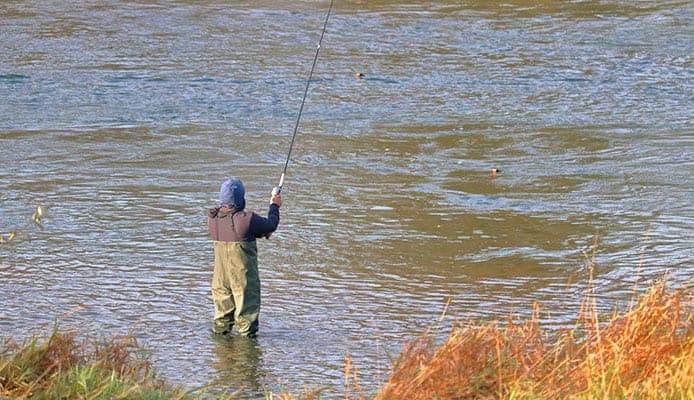 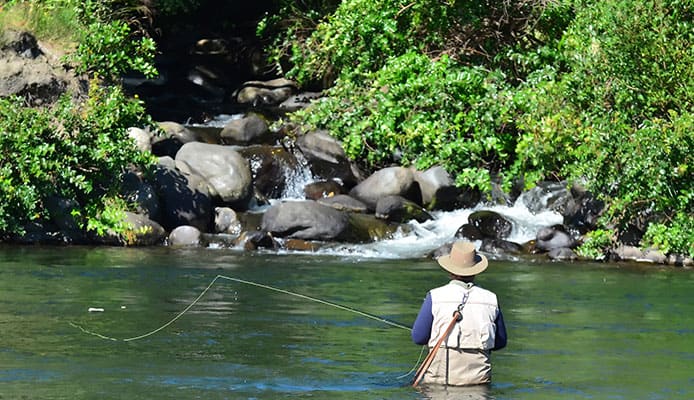 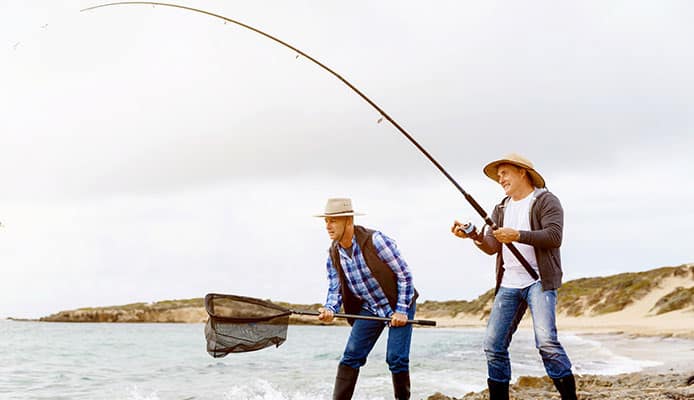