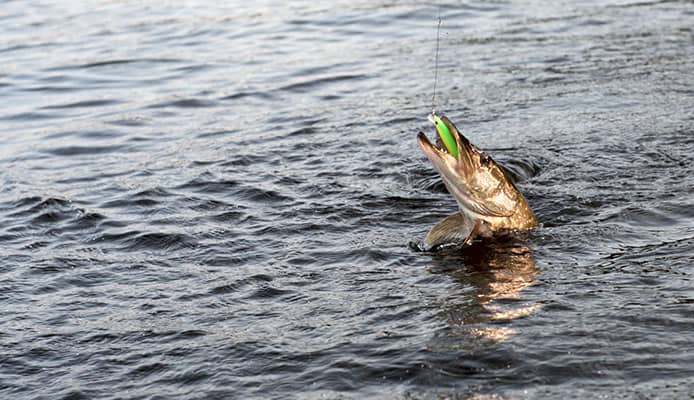 The northern pike is an exciting freshwater fish to go after. It features a long, slender, and powerful body with a mouth full of incredibly sharp teeth. When unhooking the fish after reeling the catch in, caution is necessary to keep your hands from getting mangled.

Northern pike fishing can be tough, for both experienced and beginning fishermen. To make things easier for you whenever you wear your fishing hat, we have written this guide to show you how to catch northern pike.

Irrespective of whether you are going after fish in saltwater or freshwater, you probably would want to maximize the results you get every time you put on your fishing shirt, by going after your favorite fish species whenever the conditions are ideal. Irrespective of where you intend to go after the northern pike, you should find success in the late May to early June

At the beginning of the spring season, both the small and large northern pike will move to the shallow bays with water depths of approximately 2 to 15 feet. The majority of the northern pike fish spawn in April either in open water or under the ice.

By Mid-May, the spawn is generally over. After the spawn, Northern pikes usually try to get back the weight they lost during the spawning period. This increases your odds of hooking up the pike, considering that the fish will be more willing to bite.

What You Need to Know About the Northern Pike

The Northern pike, similar to crappie, is a freshwater fish species. The fish is generally fond of the cool waters. On average, the pike fish is approximately 24 to 30 inches and weighs 3 to 7 pounds. In some isolated lakes, mostly found in the northern wilderness, the northern pike is capable of growing to 50+ inches and may weigh over 40 pounds.

In North America, you can find the northern pike in the majority of the rivers and lakes. In particular, the pike population is available in Colorado, Missouri, Nebraska, Washington, Maine, and even Alaska.

Northern pike fishing is made easier by the fact that the fish is an ambush predator. The fish will eat anything that can fit into its mouth, including frogs, baitfish, small birds, mice, muskrat, etc. This means that there is no shortage of lures you can use with your baitcasting rod when northern pike fishing.

The northern pike features perfectly developed lateral lines that start on the head and extend all the way to its tail. The fish uses its sense organs to detect both high and low-frequency vibrations. This helps the fish detect its prey even when in low-visibility waters. Making use of lures capable of creating a lot of vibration and movement when northern pike fishing can increase your chances of landing the fish.

Even if you already know how to catch northern pike, you may not have much success if you do not have the right northern pike fishing trip gear. In this section, we will discuss the gear you may need during your day or night fishing trip.

A 7-foot, medium-action fishing rod combined with a baitcasting or spinning reel can be perfect for the pike fish. The reel should feature a maximum drag of approximately 15 pounds. It should be spooled with a 15- to 20-pound braided fishing line. This setup is capable of helping you land just about any northern pike that hits the lure.

If you know where to find the trophy-size northern pike – fish weighing between 20 and 40 pounds – beefing up your rig may be necessary. You may need to upgrade to a medium-heavy action fishing rod and also increase your fishing line to the 30-pound test.

Irrespective of whether you decide to go with a heavier or lighter setup, you need to go with something that makes casting the spinning rod for longer distances possible. For northern pike fishing to be successful, covering a lot of water is important. This means that you will need to choose a high-quality spinning or baitcasting reel with a large diameter spool capable of releasing your fishing line effortlessly.

One thing that anglers who are familiar with how to catch northern pike would tell you is that landing the fish can be tricky. Having a good boat net can make landing the northern pike easier. Any net in the ballpark of approximately 20 by 23 inches can make scooping up a thrashing northern pike much easier.

Removing the hook from the northern pike’s mouth can be tough. To remove the hook safely and quickly, you may need to use a pair of long needle-nose pliers.

When northern pike fishing, you have to keep in mind that the fish features incredibly sharp teeth. It is known for cutting through the fishing line easily. To decrease the number of lures you lose and also increase the chances of bringing the pike to your boat, a wire leader material is generally recommended.

When rigging your bait or lure, you can attach approximately 3 to 4 feet of 20 to 30-pound test fluorocarbon fishing line to the mainline as the leader and then attach the wire leader to your fluorocarbon. The ideal wire should have a small diameter and also be flexible. This will ensure that it does not interfere with the lure action.

You can keep things simple by skipping the fluorocarbon and attaching 12 to 14 inches of the wire leader directly to the main fishing line, using a barrel swivel. You can also make switching lures much easier and faster and also conserve wire by tying a snap swivel to the wire leader end and then attach the lure to the swivel.

You can catch the northern pike fish on a wide range of lures and live baits. According to experts who know how to catch northern pike, using artificial lures is the most engaging and fun way of catching the northern pike. In some instances, however, it is necessary to use meat to satisfy the fish’s hunger.

The ideal live bait for northern pike fishing includes small baitfish and minnows. You should try to match the food source that is actively swimming around the waters you intend to fish in.

You can either purchase your baitfish or use your cast net to get some from your fishing spot. You should look for baitfish whose length ranges between 4 and 6 inches.

Various rigs can be used when northern pike fishing with live bait. The commonly used rig is a simple bobber. This features a bobber, fluorocarbon fishing line leader, wire leader, and a 1/0 hook. Hook your minnow through the back and then fish it suspended 1 or 2 feet above the weed beds.

In deeper waters, you may need to rig the live bait on 0.25 to 0.75 ounces jig head by hooking it through its lips. You can bounce the rig along the bottom with lifts of about 2 to 3 feet, allowing the bait to sit momentarily before lifting it and retrieving it.

There are 3 top-rated lures for northern pike fishing. They include the spoon, inline spinner, and soft plastic swimbait. You can find these in varying color combinations ideal for northern pike.

Allowing the spoon to fall and flutter will make the northern pike think that it has just singled out an injured fish. When retrieving the inline spinner, its blade pulsates and pins, sending vibrations in every direction, which can trigger the northern pike to bite. The soft plastic lures allow the anglers to customize them to fit almost every pike fishing scenario.

How to Catch Northern Pike 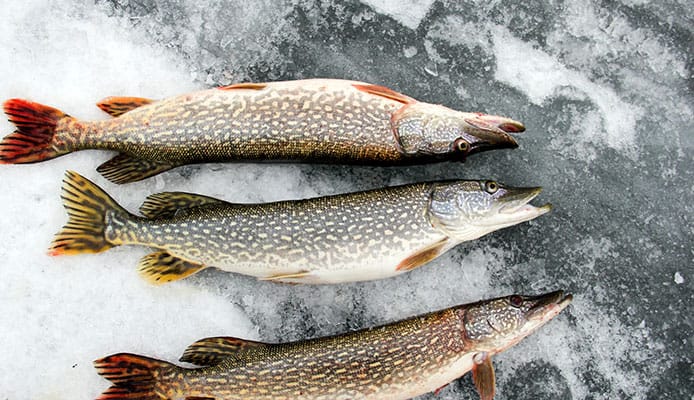 When scouting a lake for the northern pike fish, depth and aerial maps play a key role. Also, ensuring that you have a high-quality fish finder can make your job much easier.

Bays, smaller inlets, and coves are some of the best places to look for the northern pike. Look for shallow and marshy areas featuring a lot of grass and weed. Mark places that typically hold numerous baitfish, including submerged logs, undercut banks, and fallen trees.

As the summer heats up, you can try to locate the pike fish in the drop-offs, which give the pike access to the deeper waters. You can use your depth map or depth finder to locate areas that go quickly from 1 or 2 feet to 8 or 10 feet.

After identifying the areas with a high potential of harboring the northern pike, you can start casting. When fishing in weeded areas, use a weedless spoon or a plastic swimbait rigged weedless on an ideal swimbait hook.

The northern pike usually sits motionless, in a classic ambush fashion, while waiting for prey to swim by. Cast your lure past the weed line and then retrieve it slowly. If a pike is nearby, he/she will be tempted to attack.

In areas featuring submerged logs and downed timber along the shoreline, the spinnerbait is the ideal lure. Cast thoroughly and methodically to cover the entire area. You can try varying your retrieves if you aren’t getting hits.

On drop-offs, use a soft plastic swimbait rigged on a 0.75-ounce standard jig head. In the deeper waters, the northern pike is generally less active. For this reason, you may have to experiment with how high to lift, how long to pause, and how far to glide for you to get everything right.

Northern pikes are known to thrash upon landing. This can be dangerous, especially if you are unprepared. You should be prepared with a net, and if possible, have a second set of hands.

Play the northern pike long enough to make sure it is tired before trying to land it. When you bring it boat-side, have a net ready on one hand. A friend can help you scoop the fish with the net.

Once on the deck, grab its head behind its eyes or if the head is too big, grab the gill plates and then use the pliers to unhook it. You can use jaw spreaders if the fish is not willing to open its mouth. Use the jaw spreaders carefully on smaller pikes if you intend to release them. This will help you avoid permanent jaw damage. 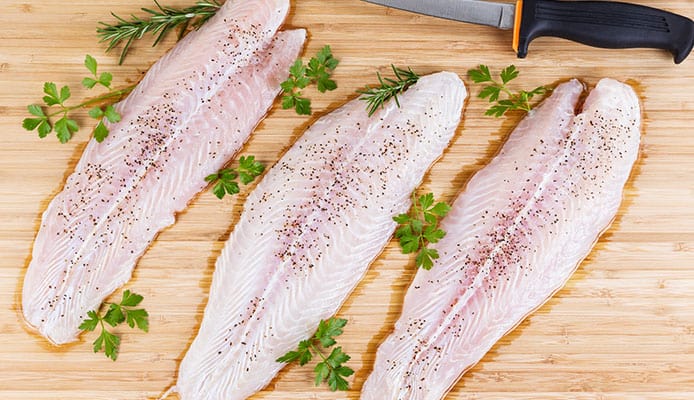 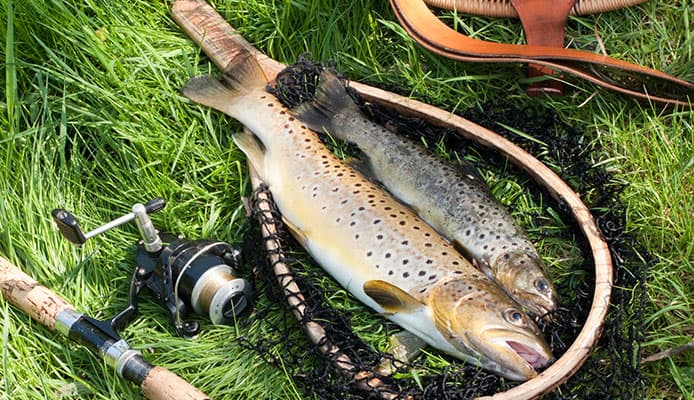 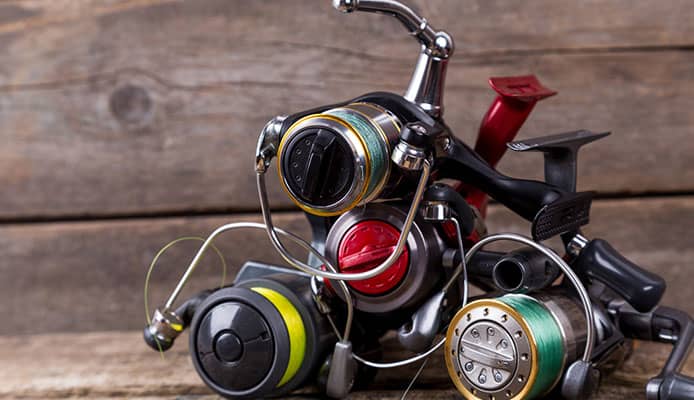