La Jolla, a picturesque coastal town in the northwestern part of San Diego, is a premier eco-tourism destination in the state of California. Because of its crystal clear waters and the abundance of marine flora and fauna, the cove and shores of La Jolla are considered by many as one of the best snorkeling spots in San Diego. But aside from being a snorkeling haven, La Jolla is also a favorite destination of many kayakers, and for good reasons, too. If you’re looking for a kayaking route with excellent views of sea caves and marine wildlife, then kayaking La Jolla is something you should definitely add to your to-do list.

The Sea Caves of La Jolla 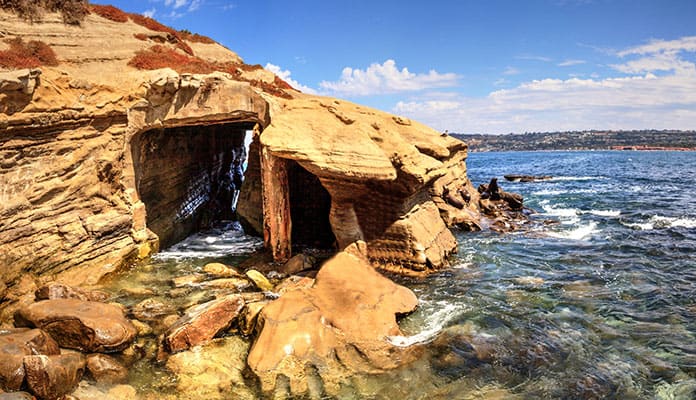 The main attractions of La Jolla are the sea caves that are formed along the sandstone cliffs in the area. The forceful waves crashing onto the face of the majestic 200-foot sandstone cliffs carved out these caverns more than 75 million years ago, making the caves one of the oldest landmarks in La Jolla and the whole of California. Only one of the caves can be seen from the shore, which means that if you want to see the rest of these jewels of Mother Nature, you’ll have to hop aboard your kayak and paddle out into the waters.

The sea caves of La Jolla have quite a history in them, as well as some interesting (and often quirky) local legends and folklore.

White Lady cave is located on the eastern corner of the sandstone cliff and is one of the several inaccessible caves in the area because of the large rocks in front of it and the high surf activity. The cave is called ‘White Lady’ because of its opening which forms a silhouette of a bustled-dressed woman. Also, a local legend tells the tale of a newly-wed bride who was swept away by the current while vacationing in the area with her husband. Accordingly, the cave’s opening resembled the bride’s wedding dress which she was wearing on the day she lost her life, and so the cave was named ‘White Lady’ in her memory.

Right next to the White Lady sits a smaller cave aptly called the Little Sister. As the smallest of all the sea caves in the area, its opening can sometimes be difficult to spot even from the water. However, a knowledgeable kayaking tour guide should be able to point out the cave’s location for you.

Shopping Cart cave is popularly known as a place where the local spiny lobster can be caught. In fact, many restaurants catch lobsters there during the lobster season and serve them to their guests. Aside from spiny lobsters, many kayakers and tour guides find sandals, sunglasses, and other items which were swept into the cave by the current. These were likely the same items that previous tourists accidentally dropped from their kayaks.

Sea Surprize may look small from the outside, but if weather and tide permit you to enter it, you’ll see a big, 80-foot passage beyond the entrance. Some people who were able to enter the sea cave report seeing colorful and fossilized marine life, as well as orange streaks on the walls above the beautiful pool of water inside.

The Arch Cave is the second deepest sea cave in the Californian Coastline, measuring a staggering 680 feet deep. There were originally two caves here but after many years of erosion, the two caves are now connected. There is only the arch between the two caves remaining, hence the name. Various caverns and tunnels are radiating from the main passage but because of the narrow entrance, the cave can be difficult to access especially during high tides.

Sunny Jim’s Cave is the only sea cave in the area which can be accessed by land. The access is through a tunnel, the entrance of which is located inside the Cave Store. History says that a German professor was responsible for digging the tunnel from the store to the cave, and spent at least two years of hard work before he finally succeeded.  Once you’re inside the store, you’ll need to pay a fee to enter the tunnel and walk the 145 steps down, after which you’ll be rewarded with a spectacular view of the sea cave upon reaching the tunnel’s end.

The Clam’s Cave is the westernmost cave and has multiple entrances and exits. Because of the position of the cave, it is protected from strong surf conditions, thus making it popular for kayakers and snorkelers alike. Of all the caves mentioned, the Clam’s Cave is the only cave that is visible from land.

The sea caves of La Jolla is certainly a must-see if you go kayaking in La Jolla. However, certain conditions like the tide and current can make it difficult for everyone to enjoy the views. For novice paddlers, it is recommended that you book a tour instead of going at it alone. There are several local tour groups in the area, and some of them have kayaks and gears for rent. Children below six years old aren’t allowed on this adventure, while seven- to twelve-year-old kids can join their parents in the kayak.

For safety reasons, not all tour operators will guarantee that you’ll be able to enter the sea caves. The entrance to the caves will depend heavily on the ocean conditions and will be determined by the guide.

Expert paddlers though should be fine kayaking along with the La Jolla sea caves on their own. Just be sure to wear a personal flotation device and let someone know where you’re going.

Fun Fact: The sea caves of La Jolla have been used by smugglers to sneak in booze during the Prohibition Era. Legend has it that majority of San Diego’s alcohol supply at that time came from such illegal activities.

The Rose Canyon Fault Line lies just east of the White Lady sea cave and is one of the few exposed fault lines in North America. This particular fault line is actually an extension of the San Andreas Fault and travels through La Jolla to Downtown San Diego. You can easily spot the fault line from your kayak, right where the tectonic plates are butted up against each other and forming a jagged crack in the earth.

Fast Fact: The Rose Canyon Fault Line is considered a right-lateral fault. So if an earthquake goes off (which, by the way, is 80 years overdue) the water displacement will be minimal. This means that you may be safer in an ocean kayak on the water than on the ground when the earthquake strikes. 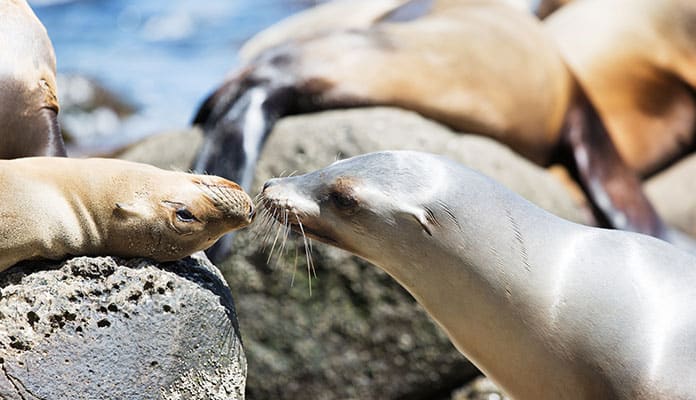 The sandy bottom of La Jolla Cove slopes out gently to about 100 feet deep and then takes a sudden 500-foot plunge into the La Jolla Canyon. The deep waters of the cove attract a variety of aquatic creatures, many of which can be observed from a kayak. If you are kayaking in La Jolla, you are bound to see some (or possibly all) of the following marine wildlife in a single paddle.

Leopard sharks make a yearly pilgrimage to the shallow waters of La Jolla to spawn. Because of the crystal clear waters, you should have no trouble seeing them from your kayak. Kayaking is one of the best ways to observe these leopard sharks as it gives you a bird’s eye view while you kayak above them. If you want to get up close and personal with these docile sea creatures, you can bring your snorkeling gear and swim alongside them.

Sea Lions are permanent residents of the La Jolla Cove and you can actually see them even from the shore. But why settle for a view from afar when you can see them up close while kayaking? While paddling along the sandstone cliffs of La Jolla, you can actually see sea lions swimming underneath your kayak. Some may even swim alongside your kayak, so be careful whenever you dip your paddle. If they’re not on the water, you can see them sitting on the rocks and basking under the sun.

The Garibaldi is California’s state fish, and one of the different aquatic creatures you’ll see while kayaking in La Jolla. Garibaldis are long (typically 14 inches in length) and have a vibrant orange color. You will easily spot them when you look down at the kelp beds found in the shallow waters and the reefs.

One of the biggest attractions of La Jolla Cove is the whales which can be seen swimming in the deeper areas of the waters. If you’re hoping to see them while kayaking, head to La Jolla between November and February. During these times of the year, you can enjoy watching the whales as they swim along the migration routes to and from the Arctic and the warm sea of Cortez in Mexico.

Squids aren’t the most glamorous of sea creatures, but the sight of a squid run can be a nice view from above a kayak. Squids spawn in this area for several weeks or even months, covering the floors of the La Jolla canyon with their white eggs.

There are several other species of marine life that frequent the waters of La Jolla such as shovelnose guitarfish, rays, sea bass, and others. Some paddlers, scuba divers, and snorkelers even report seeing a hammerhead or two out in the water. Given the vast expanse of the ocean, you’ll never be known what sea creature might suddenly come into view. 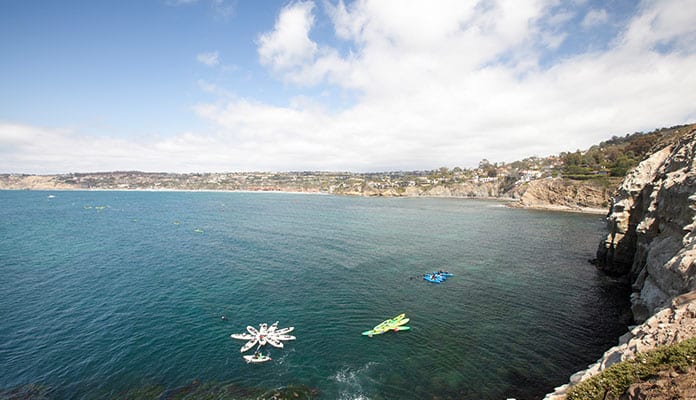 The La Jolla Underwater Park is a 6,000- acre wide marine life preservation and aquatic recreation zone. The waves break tamely in this area, making it a great spot to launch a kayak or learn paddleboarding. Besides, the crystal clear waters, kelp forests, artificial reefs, deepwater canyon, and the thriving marine life make this underwater park a prime destination for snorkelers and scuba divers.

The park is divided into two main sections: the Ecological Reserve and the Marine Life Refuge.

The Ecological Reserve makes up a vast majority of the whole underwater park. The reserve provides shelter to the various marine flora and fauna thriving in the area. It is a specially protected zone so fishing with fishing kayaks and scavenging is totally banned here. Some buoys mark the reserve’s perimeters and the “no boating” zones.

Part of the Ecological Reserve is the La Jolla Canyon. The canyon is a 500-foot drop from the shallow sand flat that extends gradually to the ocean from the shore. Within the park, the canyon reaches a depth of 600 feet. The deep waters combined with the rich food sources are the reasons why whales often come close to the shore during migration seasons.

The Marine Life Refuge lies north of the Ecological Reserve and is used for research by the nearby Scripps Institute of Oceanography. Whereas fishing and scavenging are prohibited in the Ecological Reserve, the said activities are generally allowed around Scripps Pier. Corbinas, perch, and shovelnose guitarfish are commonly caught in the area. This is also the perfect spot to take photos of the spectacular Pacific sunset.

Before you pack your gear and head to La Jolla, here are some tips to make your kayaking trip in La Jolla much more enjoyable.

The coves and shores of La Jolla offer paddlers a wonderful opportunity to enjoy Mother Nature’s natural wonders and the various flora and fauna thriving in the place. If kayaking La Jolla is something you’ve been dreaming about doing for years, then hopefully we’ve done our part to encourage you to get up and go. For sure, this is one kayaking adventure that you’ll remember and talk about for many years to come. 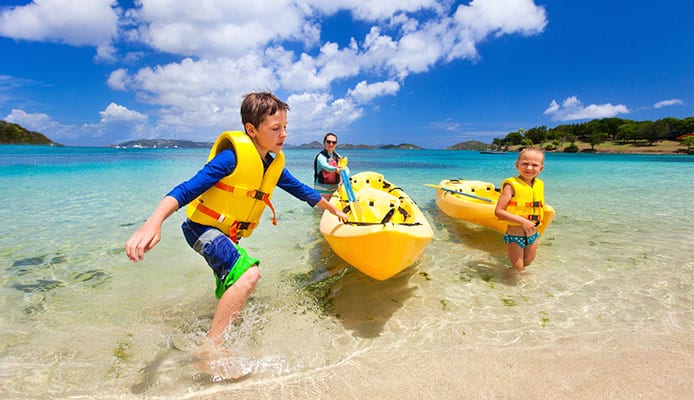 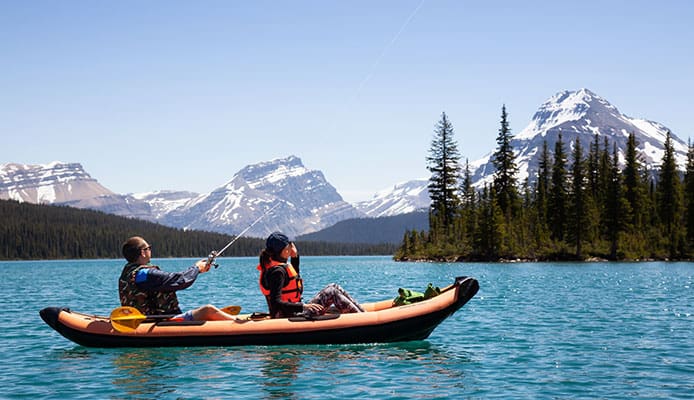 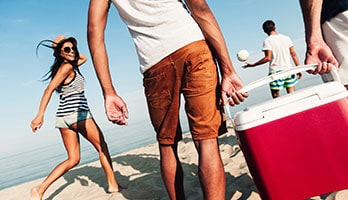