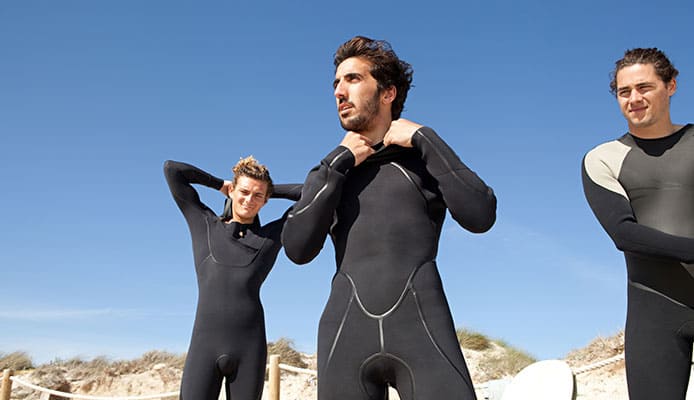 If you enjoy water sports such as surfing or scuba diving, then you’ve probably worn some clothing made from neoprene while enjoying any of these activities. But is neoprene waterproof? And what is it?

In this article, I’ll highlight what waterproof neoprene is, what it is used for, and whether it’s safe.

What is Waterproof Neoprene?

Neoprene is also known as polychloroprene is a synthetic material that was developed in 1930 by Wallace Carruthers, a scientist who worked for DuPont Company. It was created to be a synthetic alternative and because of the high demand for natural rubber.

Neoprene is used in manufacturing waders, skin diving wetsuits, and other water sportswear.  Wetsuits were first invented by Hugh Bradner in 1952 because he wanted to make US Navy divers feel comfortable underwater.

Neoprene is a good insulator because of the gas bubbles inside it. Body heat warms the water which in turn insulates the user. It’s also highly buoyant which helps users keep afloat. That’s why waterproof neoprene is not only used on wetsuits but also other water sports clothing.

When you wear neoprene in water, small amounts of water will enter the fabric and become trapped between your skin and the neoprene. The water will then keep you warm as it will be heated by your body temperature. However, the waders or the wetsuit should be fitted tightly for this to work.

How is Waterproof Neoprene Made?

Waterproof neoprene is produced through a chemical reaction that uses chloroprene leaving behind polychloroprene chips. The chips are usually melted and then mixed with foaming agents and carbon pigments.

The mixture is baked in an oven until it expands. You can slice up the resulting neoprene in your desired thickness to create neoprene sheets. You’ll find neoprene sheets placed between two other pieces of fabric usually nylon or polyester.

There are times when elastic fabrics are mixed in to increase neoprene flexibility, which is very useful especially when it’s worn as a garment. Neoprene fabrics vary in thickness depending on the use.

There are two methods used in making waterproof neoprene; the first is oil-based and very popular while the second is a limestone process and considered eco-friendly. Both processes start with a chemical reaction that uses chloroprene to bind all the molecules together leaving behind polychloroprene chips.

Neoprene manufactured from the limestone process differs from the oil-based neoprene. It has a closed-cell structure of higher density resulting in increased heat retention, durability, elasticity, and decreased water absorption. The closed cells have air bubbles that are packed tightly together.

The stretchy, water-resistant, and flexible qualities of waterproof neoprene make it the best material for wetsuits. Deep-sea diving suits are made from 6 to 7 millimeters thick neoprene where pressure is higher on the rubber since insulation is greater when the neoprene is thicker.

Apart from helping you dive deep under the sea, neoprene has fantastic weather and ozone resistant properties.

Neoprene is waterproof and performs well in extreme environments and temperatures because it’s resistant to heat. It’s also resistant to oil making it ideal for seals.

How neoprene and wetsuits clothing is stitched then glued makes it possible for the seams to be sealed giving waterproof neoprene extra resistance to water.

After a wetsuit material has been bonded together and glued, a blind stitch is used to strengthen the wetsuit seam to maintain its watertight seal.

Blind stitching is a method used on neoprene clothing for stitching seams inside out. The stitch never goes all the way through and doesn’t leave holes on the outside. The seams are usually glued for added durability.

Neoprene isn’t considered toxic. It can be a liquid or a solid and is considered chemically stable. However, the gasses released during the manufacturing of waterproof neoprene can be harmful. It can also release into the air dangerous hydrogen chloride when burned.

Hydrogen chloride is a severe respiratory and eye irritant. It can cause burns in nasal membranes and dental discoloration. Animals exposed to this chemical can develop bronchial and tracheal necrosis.

People with skin sensitivities may experience allergic reactions such as dermatitis after wearing neoprene. This is because of dialkyl thioureas (mixed chemicals) which were declared in 2009 the allergen of the year by the American Contact Dermatitis Society (ACDS) due to the skin reactions caused.

Can Neoprene be Washed?

Next, mix a small amount of the cleaning detergent in a bucket full of water than hand wash the clothing. Wash the neoprene gently while squeezing out the dirty water and leave it to soak for a while.

Rinse repeatedly until all the cleaner suds are gone. Avoid air-drying your neoprene in direct sunlight since Ultra Violet rays will break it down faster.

Waterproof neoprene is safe for most people. If you’re not allergic to it, you can wear it and enjoy your most-loved water sports. Neoprene has excellent insulating abilities and can be essential clothing when fishing or kayaking in colder environments.