Sailing is one of the oldest pastimes in the world, one that has been around for just about as long as boat fishing and boat travel. It’s a great activity to share with family and friends, just as it is also a great way to spend some time alone. If you are planning to get into sailing whether, for recreation or sport, you’ll need to familiarize yourself with some basic maneuvers like tacking and jibing. Whether you’re out sailing in the ocean or a large lake, you need to learn how to tack and jibe a sailboat to move into or away from the wind and change your course.

Tacking and jibing are quite simple concepts and fairly easy to understand even for beginning sailors. However, it will require some learning and practice to execute them properly and safely. So get your sailing sunglasses on and let’s get started.

Tacking a sailboat (or also referred to as “coming about”) means changing the direction of the vessel to move upwind or towards the direction that the wind is coming from. Since you can’t sail directly into the wind, you must tack back and forth across it to move forward. If you want to stay as close as possible to the direct path of your destination, then you’ll have to tack fairly regularly. This is why it is one of the basic yet most important sailing skills to learn and master.

How to Tack a Sailboat

Tacking a sailboat involves a series of steps. Note that some sailors may have different ideas and techniques about how to tack more effectively and efficiently. However, the procedures (and accompanying commands) outlined below are generally accepted in the sailing community.

Tacking a Sailboat: Tips and Considerations 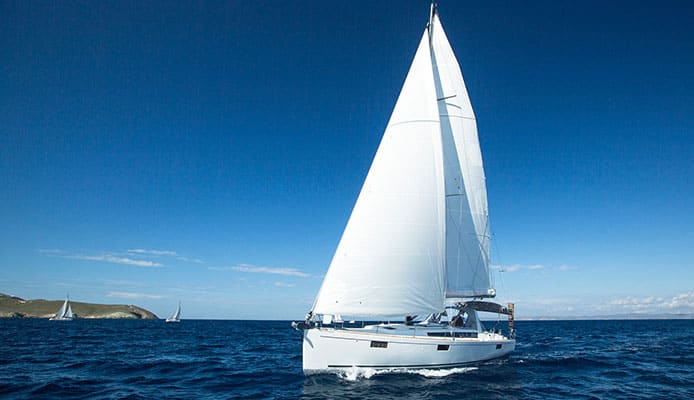 Sailboats have more difficulty in carrying and maintaining their speed through the completion of a turn if the winds are strong and the waves are big.

Stalling in a Tack

How to Jibe a Sailboat

Jibing a Sailboat: Tips and Considerations

While there are lots of resources on the web in the form of articles and videos that discuss the specifics of how to tack and jibe a sailboat, there is still no substitute for experience. In sailing, the age-old adage of “practice makes perfect” rings true as it does with any other technique in any other sport or activity. So ready your sailing gear and equipment, sailing shoes and sunglasses and all, and go have fun while practicing.