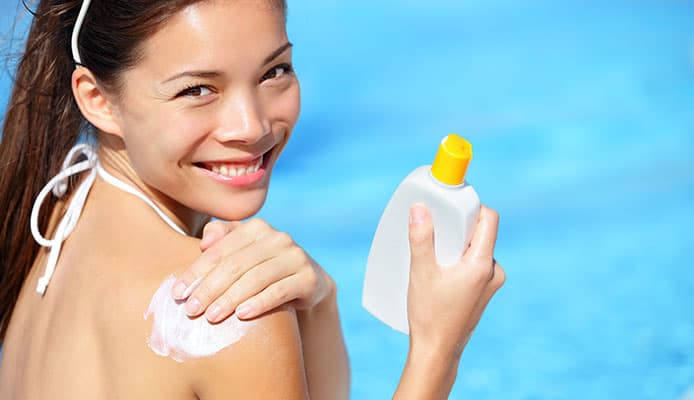 Whenever we pack for a trip to the beach, the first item that goes into our bags is the sunscreen. Of course, we all want to block the dangerous UV rays from damaging our skins but as it turns out, every application of this protective layer is a slow death to our beautiful coral reefs.

In fact, some states like Hawaii have banned the sale of sunscreens containing chemicals that are harmful to reefs. Oxybenzone, an active ingredient used in almost 50% of the sunscreens found in the market today, have been confirmed to affect the growth and reproduction of coral reefs.

You may now want to take a keen look at the ingredients of your sunscreen before smearing. And even when you go shopping for one, just don’t go for those labeled as “reef safe” as until today, no one has confirmed whether these are safe for marine life or not.

Why Does It Matter?

An aquatic ecosystem is very fragile. A slight temperature change can bring undesirable effects not only to the plants but also to fish and other living organisms. When toxic chemicals leach into the water, they disrupt its temperature, which kills marine organisms.

Human beings are the main carriers of these toxins. The coral environment attracts all sorts of water athletes ranging from free divers and scuba divers to snorkelers. These water sports lovers enjoy swimming alongside thousands of fish species who have made the coral reefs their home.

But here is what the water athletes and everyone else who loves taking an adventure underwater don’t know.

When you wear sunscreen, the toxic chemicals ooze into the water where they are taken in by the reefs. The corals, being the most vulnerable marine plants, are the most affected, as the substances disrupt their growth and reproduction cycles and eventually lead to their death by bleaching.

What if I apply the sunscreen but don’t participate in any water sport, am I still threatening the life of the corals? – You may ask!

Well, even if you are not going for a swim after slathering sunscreen, it can still find its way to the ocean when you shower on the beach.  Remember you will be rinsing off the sunscreen on the sand and chances are that it will be carried to the ocean and later absorbed by the corals. So, yes, even if you are just taking a walk along the beach, as long as you have sunblock on and you will take a bath, you are still risking the lives of the corals.

It is estimated that 15000 tons of sunscreen are absorbed into the oceans every year. While human beings are probably the main cause of this contamination, they could also be the main source of healing for these vulnerable marine ecosystems.

But How Exactly Does The Sunscreen Harm The Reefs?

The chemical substances and mostly oxybenzone have proven lethal to coral reefs in 4 different ways:

Coral reefs have been exposed to enough bleaching already through overfishing, rising and falling of ocean temperatures, boat anchoring, and mining. Striking them with harmful chemical substances could be totally depressing. And as we mentioned earlier a good population of fish species lives in the reefs, so you can imagine how big a loss this is.

So What Is A reef Safe Sunscreen?

You only need to put a little amount of it in your hands and slather it in sections. Unlike normal sunscreens, this one forms a white coat like a film on your skin or leaves some white residue when you immerse yourself in the water.

Even though there hasn’t been a single sunscreen that leaves 100% positive effects on the reefs, a reef-safe sunscreen has been proven better than the normal sunblock. The greatest advantage being that this kind of sunscreen is healthier and you will be releasing fewer chemicals into the waters.

How To Choose A Reef Safe Sunscreen 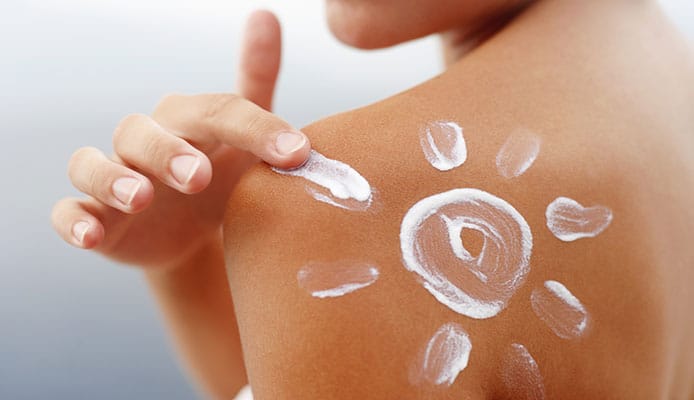 Oxybenzone: By now, you already know that oxybenzone is the number one killer of marine life. So, this is the number one ingredient you should be on the lookout for the next time you go shopping for sunscreen. It is one of the most commonly used UV blocking chemicals and is found in almost all common sunscreens.

And by the way, it doesn’t just harm the corals. It disrupts your hormones, causes low birth weights, allows other chemicals to enter and damage your skin, and causes early puberty in girls.  The main reason why it is used as an active ingredient in many sunscreens is that it helps the sunblock to slather and rub in clearly.

Retinyl palmitate: Unlike oxybenzone, this one is found in a smaller fraction in sunscreens. When exposed to the sun retinyl palmitate is believed to increase the risk of skin cancer.

Parabens: This group of chemicals is used in sunscreens and cosmetics to prevent fungus and bacteria. Isobutylparaben, butylparaben, propylparaben, ethylparaben, and methylparaben, the preservatives found in these cosmetics, have been found to cause breast cancer in women.

You want a mineral sunscreen that forms a mask on your skin rather than being sucked up into the body. Look for a sunscreen that contains titanium oxide and zinc oxide as the active ingredients. These two form a film on your skin that filters UV rays and provide wide spectrum protection.

This applies to organic sunscreens as well. Plant-based oils, like lavender and eucalyptus, when added to sunscreens can be harmful to aquatic organisms. Additionally, sometimes the beeswax used in the organic sunscreens could contain industrial insecticides that could be unleashed in the water and on your skin when added to beauty products. The wisest thing to do is to get a sunscreen that has the least ingredients possible.

It is never a smart move to go out in the sun without some sunscreen. But you can also plan how you wear it.

The most recommended way is to slather it on your face around your eyes, ears, back, and front of your neck, hands, and legs. Then cover the rest of the areas with UV protective clothing.

If you are a kayaker, snorkeler, or surfer, your chances of developing conditions related to UV rays are much higher than people who don’t spend a lot of time in the waters. That said, you need to invest in at least one rash guard, long-sleeved swimsuit, or anything else that could cover the rest of the body where sunscreen is not applied. Sunhats and sunglasses will also go a long way in blocking the sun out.

4. Invest in Rubs, Not Sprays

SPF creams and lotions are a better option than sprays. Rubbing them in your body gets them to stick onto your skin rather than the sand. Most spray sunscreens will do the opposite and when the tides come, all this sand that is covered with chemicals is drawn to the ocean, leading to water contamination.

5. Reef Safe May Not Be That Safe After all

With the rising demand for reef-safe sunscreens, most manufacturers have started labeling their products as “reef safe” to help consumers get the right sunblock for their water activities. While this may be the best way to get everyone to purchase a reef-safe sunscreen, studies have shown that this can still pose danger to the marine environment.

Even if the products may appear safe for use underwater, a high concentration of these in the waters can still ruin the aquatic ecosystem. The oils from the sunscreens can be toxic to corals and other marine organisms.

6. Wait For The Sun To Go Down

Water sports can be addictive. Sometimes we spend so much time in the ocean that we don’t even realize how much sunscreen is lost through sweat. If you go swimming or paddling, get some shade when the sun gets unbearable.

A nice beach umbrella will help you cool down and reduce the amount of sunblock that would end up dripping into the water. You can plan your water activity before noon or later in the evening when the sun is not too hot.

Why We Need To Take Care Of The Coral Reefs

You now have an idea on how to choose and wear reef-safe sunscreen. But maybe you are wondering, “Why should we care about these marine plants so much anyway? After all, they are just plants!”

Well, these are not just like any other plants, and right about now, we are going to tell you why. Read on!

1. They Protect Coasts From Waves And Strong Currents

Reefs make the water move slower. One interesting fact about the corals is that they tend to form in areas where waves and ocean currents are the strongest. Without these amazing aquatic plants, most coastal ecosystems and other fragile parts of the world would not be able to thrive.

Corals feed on the particles found in the bottom of the ocean. This makes the water clearer and improves the quality of our beaches.  Clearer waters also ensure that reefs continue to grow and reproduce.

Different species of fish have been consumed by human beings over and over again. Were it not for coral reefs, there couldn’t be a single fish in existence. There is just so much for fish and other marine animals to eat in the corals, which helps them to grow and reproduce faster despite the high rate of fishing in the oceans. Additionally, reefs serve as the nurseries and hatcheries for the major fish species eaten today commercially.

People travel from various parts of the world to areas where there are coral reefs. One famous tourist destination is the Great Barrier Reef that brings in over $375 billion annually from tourism.  Without places for scuba diving, snorkeling, and all those water sports that attract people underwater, tourist-dependent economies would come tumbling down and lots of jobs would be lost.

No one says that you shouldn’t wear sunscreen when spending time in the sun. In fact, with so many people seeking information on how to choose and wear reef-safe sunscreen, some health practitioners are worried that too much awareness for reef safe products may cause people to ditch UV protection altogether.

The good news is that there are still ways you can prevent yourself from the harmful rays. One of the best ways to go about this is by using UV protective clothing that extends to a large part of your body and covering the remaining parts with your sunscreen. The idea here is to minimize the amount of sunscreen we leave in the waters as much as possible.

Corals are important to us and without them, so many things could go wrong. So be reef-friendly and leave behind as little sunscreen as you can. Leave none if possible! 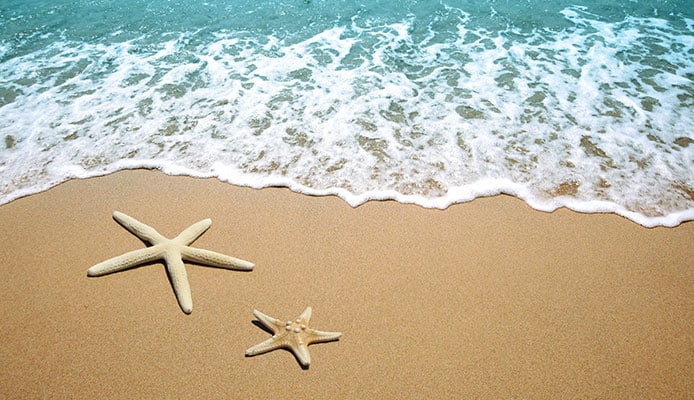 Why Is There Sand On Beaches? 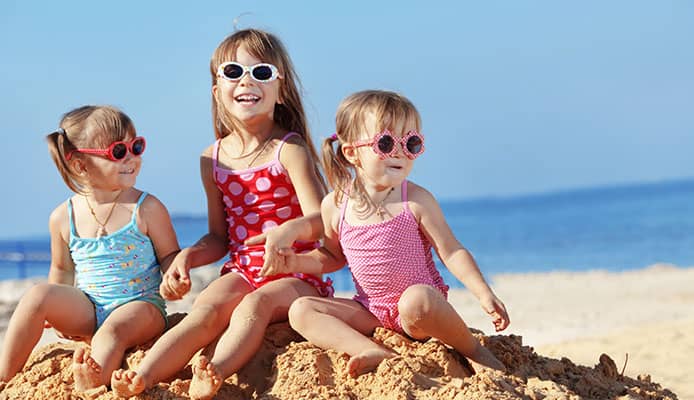 How To Keep Your Child Safe At The Beach 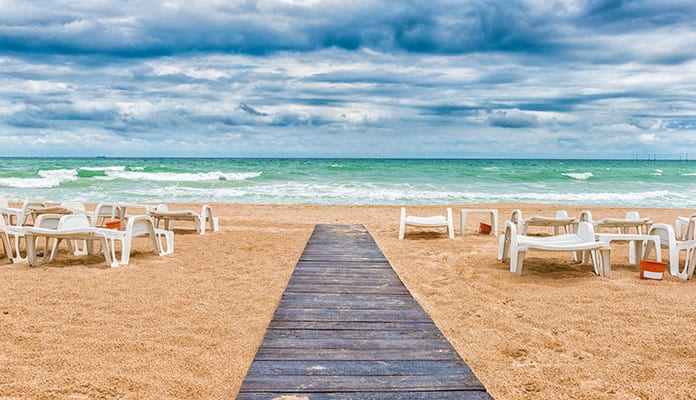 Can You Tan Through Clouds?