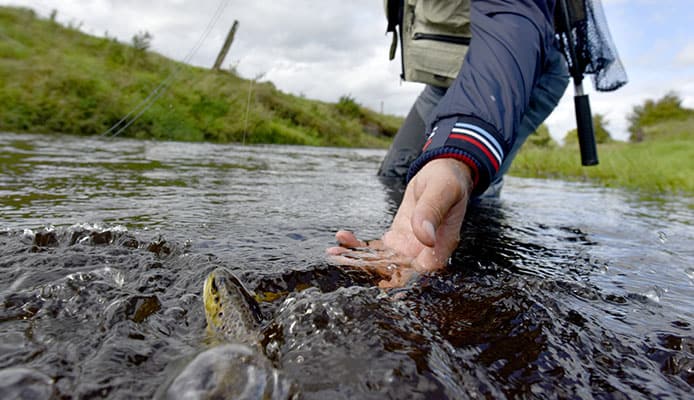 Trout is generally widely available all over the country, so if you ever plan on fishing for one, then you should have no trouble looking for a place to do so. The best part is that you don’t need any special equipment to land a trout, (unless of course, you’re willing to invest in some). On most days, it is pretty normal to catch several fish a day – that is, if you know what you’re doing. Otherwise, if you’re just starting with this sport or hobby, here’s a quick guide to help you out. After you’re done reading this article, you should have a fairly good idea about how to catch trout.

1. Know the Best Time of the Year to Fish for Trout

Although trout is accessible all year round, you’ll want to schedule your fishing adventure during the later parts of spring up to the middle parts of summer. Many anglers enjoy landing several large trout during these times of the year, and you may end up being just as successful as they are provided you know what you’re doing.

Trout are cold-blooded, which means that their body temperatures are greatly affected by the water temperature. During the warmer months of the year, the water temperature rises and becomes just right for the trout to move around the water and hunt for food. On the other hand, during the colder months of the year trout are generally inactive and will most likely be in hiding. This doesn’t mean that you can’t go fishing for trout from early fall to early spring since, as was mentioned earlier, trout are available throughout the year, it’s just that you’ll find it more challenging to catch them.

2. Know the Best Time of Day to Fish for Trout

If you are fishing during the warmer parts of the year as suggested earlier, the best time to fish for trout would be during the early morning and late afternoon. During these times, the water temperature will be just right for the trout. During midday, the sun will be shining intensely that the water temperature becomes too high, which in turn will make the trout swim into the deeper and cooler parts of the water.

On the other hand, if you’re fishing during the colder months of the year you’ll want to do so during midday since early mornings and late afternoons are too cold, rendering trout (and most other fish) inactive.

Fishing reels come in various types and designs, but the three most commonly known and used are the conventional, spin-cast, and spinning reels. Different anglers choose a specific kind of reel based on several factors like personal preference, the price, and the ease of cleaning a fishing reel. About trout fishing, many people prefer using a spinning reel.

There are several things that you need to consider when it comes to choosing a spinning reel for trout fishing. For one, you’ll want to choose a light to medium reel if you’re fishing for smaller varieties of trout like rainbow trout or brown trout. If you’re after the larger species like lake trout or steelhead trout, then you’ll want a medium reel. Also, you’ll want a reel with high line capacity, good casting performance, a reel size of 1000 to 2500 (choose the higher number for large trout species), and higher drag control.

4. Get the Right Rod

Choosing the right fishing rod is essential for successful trout fishing, and since you’re using a spinning reel, it only makes sense that you’ll want to use a spinning rod. You don’t want to head out into the water carrying a mismatched rod and reel, do you?

There are no hard and fast rules when it comes to choosing a spinning rod for trout fishing since the choice mostly boils down to personal preference and fishing technique and style. Still, several guidelines can help you find the perfect rod for you.

In general, the choice of a line is a matter of personal preference, but some lines simply work better than others when it comes to trout fishing. That said, here are two kinds of line which many anglers use when targeting trout, each of which with its own pros and cons.

Many anglers say that trout is the ‘line shy’ freshwater fish in the water world. As such, fluorocarbon fishing lines make a great choice because it’s crystal clear and virtually invisible to trout underwater. Besides, these lines allow you to feel the bites a lot quicker because it’s not really elastic and doesn’t stretch much. Furthermore, if you want to get your bait down in the strike zone a little bit better, this line can do just that. The only downside to fluorocarbon lines is that they can be quite expensive, especially for those who are just getting into the sport.

Monofilament lines (or ‘mono’) is still widely used by many trout anglers. For beginning and budget-conscious anglers, these cheap lines are often the best choice. Compared to fluorocarbon lines, monolines are a little bit more elastic. This can be a good thing since it gives a little bit and reduces the chance of the line breaking or snapping. However, this does not mean that it will not snap because it will. To keep that from happing, always keep an eye on your spinning reel’s drag setting. Besides, monolines float (unlike fluorocarbon lines which sink) which is good if you’re using topwater baits. A word of advice when choosing mono lines: avoid bright colors. As mentioned earlier, trout are generally lined shy, and they’ll easily avoid brightly colored lines regardless of the bait or lure dangling on its end.

6. Use the Right Hook 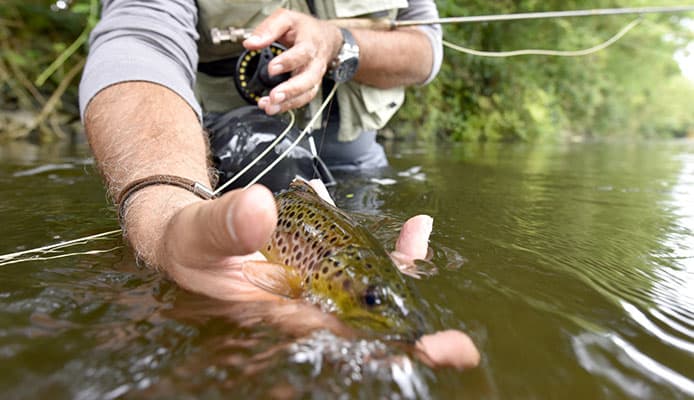 One of the most important tackle decisions you’ll have to make is choosing the best hook for trout fishing. Needless to say, if you end up using the wrong hook, then you may have trouble landing that trout.

As with all the other trout fishing gear mentioned here, there are several things that you need to take into consideration when it comes to choosing which type of hook to use for trout fishing. But again, most types of the hook are generally acceptable.

Single hooks are generally used for trout fishing and come in various sizes and styles. For instance, some single hooks have shorter shanks, while others have longer ones. Some also have straight points, whereas others have an offset point. One thing that many anglers observed is that trout are capable of shaking off an offset point hook, which then makes a straight point a better option.

Speaking of catch-and-release, you should consider using barbless hooks. Among all types of hooks, these are the ones that will cause the least damage to the trout. Also, check with the local fishing regulations since some reserves and fisheries may not allow the use of other hooks aside from a barb-less hook.

Whichever type of hook you decide to use, just make sure that you consider the kind and size of the bait you’re using and the size of the trout you’re trying to catch. Also, consider having several types of hooks in your tackle box. You’ll never know when you need to switch between hooks while you’re out in the water.

Many anglers find success when fishing for trout using a lure or a bait, so you can basically use either of the two when you go trout fishing. However, you need to keep in mind the kind of trout that you want to catch since some lures or baits simply work better in catching specific species of trout like rainbow trout, brown trout, and others.

Fishing for Trout with Lures

Lures are supposed to imitate the type of baitfish available in the waters you’re fishing in so that you can deceive the trout into thinking it’s captured one of its prey. Lures come in an assortment of shapes, sizes, and colors. Regardless, whatever lure you use. It should be similar to the features of the local baitfish, otherwise, trout may ignore the lure.

Fishing for Trout with Live Bait

Lures are often enough to land you a trout, but if you want to take a more natural approach, then using a live bait might be a good option. There are various kinds of live baits available most local bait and tackle shops. You’ll usually come across red wigglers, composting worms, nightcrawlers, and other live baits there.

Worms are not the only type of live bait that is available for trout fishing. Most trout have a diverse diet which can include insects, minnows, fish eggs, and others.

So which live bait will give you the best chance of landing a trout? Again, that depends on where you’re fishing. If you’re fishing somewhere near the shore, then salmon eggs may result in a very productive fishing trip. On the other hand, if you’re fishing in a deep lake, then a nightcrawler may be the better choice.

Keep in mind that live bait doesn’t keep well and spoil rather quickly (which is why some anglers prefer using lures). That said, you’ll want to buy live bait just before you go fishing or the day before.

8. Get a Fishing License

Obtaining a fishing license is generally quick and easy. In most states, you can get your fishing license online, by phoning the regulating body in the locality or by going directly to the retail establishments. While you’re at it, be sure to inquire about state rules, regulations, and licenses to avoid catching fines instead of fish.

Staying safe is of paramount importance not only on a trout fishing trip but for any type of fishing adventure. That said, always wear a PFD when you’re out fishing for trout. Also, you’ll want to protect yourself from the harmful effects of the sun by wearing sunscreen, a fishing hat, and a pair of sunglasses. Also, brush up on our fishing safety rules and tips just to make sure that you’re not forgetting anything.

The tips mentioned above should be enough to get you started with trout fishing. Unfortunately, there are several other tips, guides, and advice that are too comprehensive to outline in one single article. As such, even after you read this article, do take some time to do more research. You can go online and do your research there, or you can talk to experienced anglers and ask them to share with you a few nuggets of wisdom that made them successful trout anglers.

Fishing for trout (or any other species of fish) is a great way to enjoy the outdoors. That said, don’t get frustrated if you don’t haul any trout on your first try especially if you’re just starting to learn how to catch trout. Instead, savor the moment and enjoy the challenge. Take in the scenic surroundings of the water and breathe in the fresh air. Doing so will end up making your trout fishing adventure much more enjoyable. 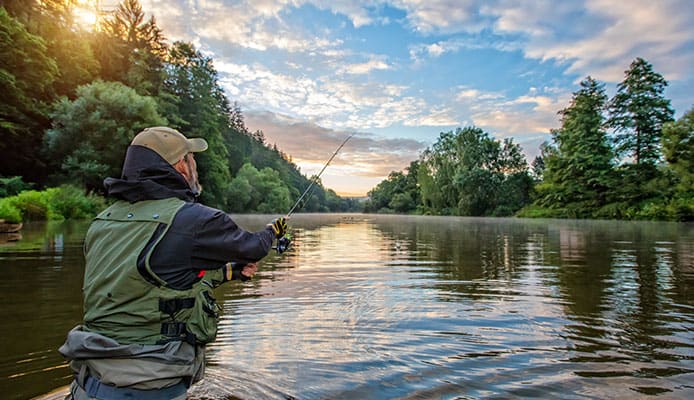 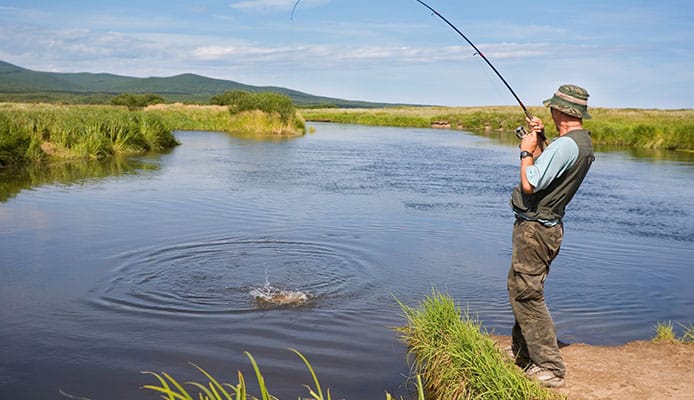 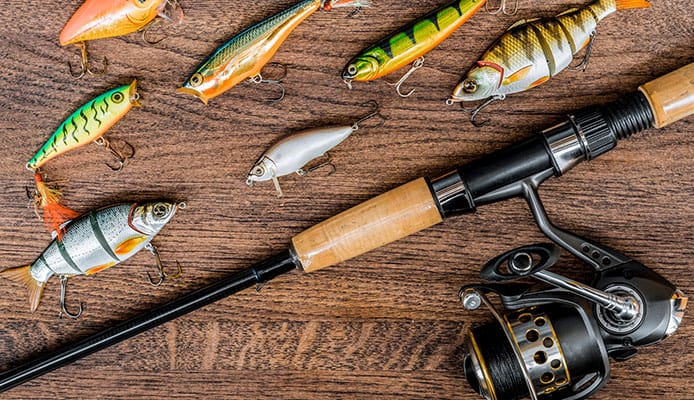