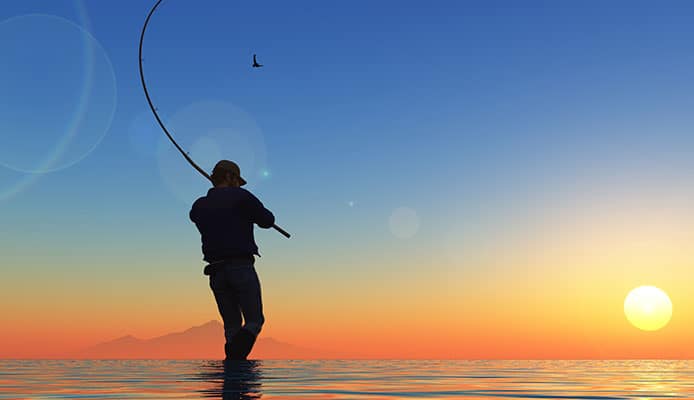 If you’ve been fishing for a while now, you’ve probably heard a lot of discussion about how the moon affects an angler’s chances of success. But the question is, does the moon really has anything to do with an angler’s chances of landing a fish? Does the moon really affect the fish behavior, where to find them, and if they’re going to take your bait or not? Is there a pattern which you can follow to make fishing during the full moon a success?

Although it is common knowledge that the moon does affect tidal flows, it seems that there are still many anglers who believe that the effect of the moon goes beyond this. To help clear things up, here’s a brief overview of the moon phases, how they affect the tides, whether the brightness of the moon affects the fish behavior, and whether full moon fishing is worth your time.

You may think that the discussion about full moons and how they affect fishing is something new, proposed by new-age anglers who consider fishing as more of science more than as an art. However, this isn’t really the case.

Ever since men have been engaged in the fishing way before the fishing rods and reels we know today were invented, early fishermen have already started noting the effects of the moon and its position or phases on their angling and hunting activities. They looked at and studied (regardless of their primitive conditions and limited resources) how the light of the moon affected their endeavors. Naturally, there would be very little (close to none) records of their studies and conclusions, but it seems that these folks believed that the moon and its gravitational force does affect tidal waves and, consequently, the fish behavior. Perhaps these early thinkers may have come up with other conclusions but so far, as it relates to fishing, these are by far the more popular notions that are still believed up to this day.

Light of the Moon

So, what does the full moon have to do with fishing anyway?

One aspect that many anglers consider the moon and its effect on fishing is the light showered by the moon on the waters. Many anglers believe that the moon’s brightness can affect the feeding behavior of certain fish species. For instance, many anglers have noticed that certain fish like billfish and mahi-mahi like to feed when the moon shines brightly. The same observation has been made of marlins.

As a result, fishing for these fish species during the daytime can lead to rather poor results, so maybe putting down your saltwater fishing rod may be considered. This is attributed to the idea that since the fish have been voraciously feeding during the bright night, they would be resting during the daytime. They would be less aggressive and less hungry as well, making them hesitant to take your bait.

But then, some fish species do not exhibit the same behavior. These include tuna and swordfish, which prefer to swim into the deeper parts of the water to avoid the bright moonlight.

Fishing on the Days before the Full Moon

Some anglers and fishing experts have also reported an increase in big game fishing on the days leading to the full moon. The actual days vary depending on who you ask, but the range generally falls between five to seven days before the full moon. In fact, those who are targeting the big and majestic black marlin often head out to the water from seven to two days before a full moon and have returned rather successfully from their fishing expeditions.

Fishing on the Day of the Full Moon

Whereas fishing for big fish several days before the full moon can be lucrative, the same cannot be said for fishing on the day of the full moon itself, again another time to consider packing up your tackle box and heading home. Going back to the argument above, some fish tend to be lethargic during daytime which can make them pretty hard to catch. However, you could try going during the night time when the moon is at its brightest. Accordingly, along with the bright moonlight comes a buzz of insect activities, and if you’re fishing for crappie, for instance, the abundance of insects buzzing on the water’s surface can attract more fish for you to catch. 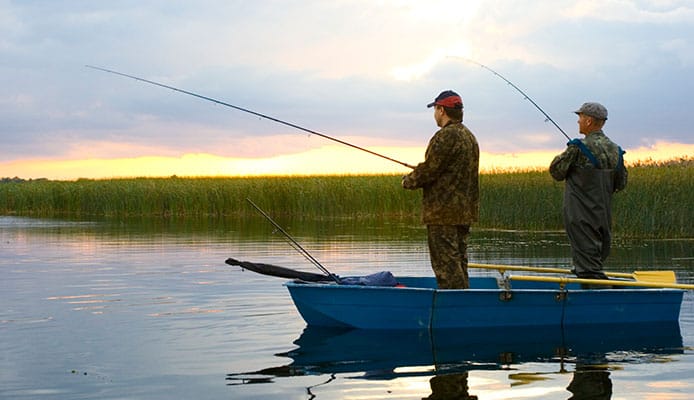 After all the discussion above about the light of the moon and how it affects fishing, there are still others who do not really believe that moonlight has any particular effect on fish behavior and fishing in general. Instead, they believe that the moon’s gravitational pull (and not the light) is what causes these changes in fish behavior. About that, they believe that it is actually the tides and the movement of water and current that anglers should be focused on and not the moonlight.

As it stands, tidal flow is true, without question, influenced by the moon phases. The moon’s cycle as it orbits the earth is divided into four phases as outlined below:

So how do these moon phases affect the tidal flow? Well, the quick and short answer would that the greatest tidal currents occur during the periods of a new moon and a full moon.

As was repeatedly said, the moon does affect the high tides and low tides that we see in our oceans. What not many people know is that the sun also has a gravitational pull and that this can affect the tides as well. And since there are two gravitational forces at play, the earth experiences at least two high tides and two low tides every day, with the high tides generally happening every twelve and a half hours or so.

And then there are spring tides and neap tides. Spring tides are when high tides are higher than normal. This occurs when the sun, moon, and earth are in a line, which is what happens during a full moon and a new moon. The tides can go even higher when the moon is at its closest to the earth. So during spring tides, fishing can be more lucrative since the stronger and higher tidal flow can push the fish closer to the shallows. Needless to say, this is one of those times when you’ll want your spinning rod and saltwater spinning reel (or whatever tackle you use) ready for action.

Neap tides, on the other hand, happen during the first and third quarter phases of the moon. Unlike spring tides, the tides aren’t very high during neap tides and tidal flow is rather slacking. For many anglers, this isn’t a very good time for fishing.

Obviously, you’ll want to go fishing when the tidal flow is at its strongest which is during a full moon and a new moon. While the tide is moving in and out, the fish could be moving along with it. When you decide to give the route a try, head to the estuaries and bays since these are where the tide movements are most noticeable. The stronger currents can also mean that the fish are in a feeding frenzy, which means that you have better chances of the fish taking your bait.

All in all, it appears that the full moon does have an effect on fish behavior and fishing in general. It also seems that these can be attributed to both the light coming from the moon and the pull of its gravitational force, although more evidence leans towards the latter than the former. Although some anglers may be debating about fishing during the full moon in pubs or even in their boats, every angler agrees that fishing is generally an enjoyable activity, whether it’s a full moon or not. However, if you’re really curious and would like to try full moon fishing to see the effects for yourself, why not check the lunar calendar before planning your next fishing trip? Also, consider making a record for yourself as to what phase the moon is in during that trip and what fish species, their number, and size as well, are biting during that time. 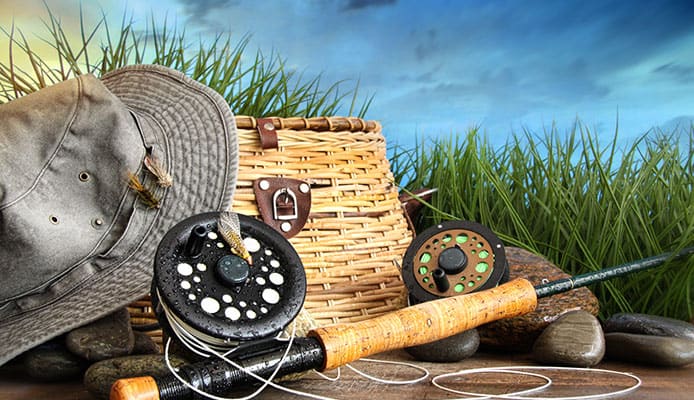 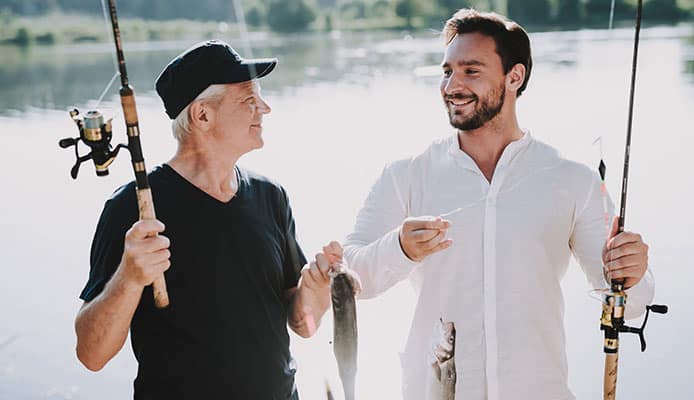 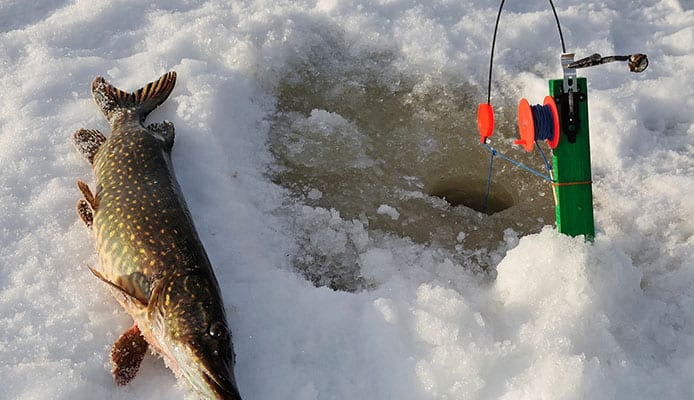