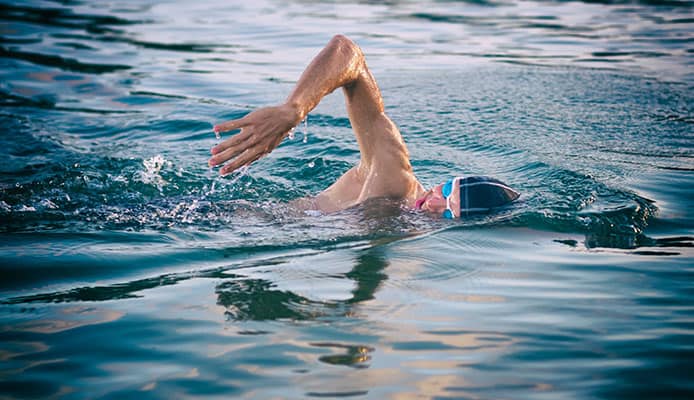 The freestyle stroke or also referred to as the front crawl is the most commonly used among the different kinds of swimming strokes. Although it may appear less complicated than other types of swimming techniques and strokes, there are actually several factors that need to be considered to execute this stroke properly and efficiently. That said, if you’re looking for ways to swim freestyle faster, reduce the risk of shoulder injuries, or simply improve your swimming techniques here are 10 freestyle swimming tips to help you achieve just that.

Swimming nose clips are designed to prevent water from entering your nose. This device, which is usually made of bent wires padded with rubber, pinches the nostrils together to keep them closed. Nose clips are primarily used by beginning swimmers and are an essential part of their swimming gear along with swimming goggles, swimming caps, swimming earplugs, and swimsuits.

Nose clips become especially helpful in keeping water from entering through your nose as you turn your head to breathe. And because you no longer have to worry about water entering your nose, you can turn your focus on breathing through your mouth instead which is a necessary skill that every swimmer needs to master.

Some swimmers delay their hand entry by waiting until their arm is completely extended above before they let it drop into the water. This practice of overreaching is not recommended during the recovery phase for two reasons: (1) it can lead to a decrease in performance and (2) cause shoulder injuries.

By avoiding overreaching and entering your arm in the water at the right time, it allows you to push some of the water out of your way thus leaving a smoother path for your body to move forward and create less total drag. Besides, letting your extended arm fall flat onto the water creates turbulence which then creates drag.

But more important than how overreaching negatively impacts your performance is how it can lead to shoulder injuries while swimming. This is because when you overreach, you put your arm and shoulder in an awkward position. Doing this repeatedly will eventually lead to shoulder impingement and “swimmer’s shoulder”, an injury of the shoulder muscles and tendons that manifests itself in pain and inflammation.

Experts all agree that to develop an effective front crawl stroke, you need to learn how to breathe properly when swimming, and this includes learning how to exhale continuously while your face is submerged in the water. This may seem like rather simple advice, yet many beginners still hold their breath when their heads go underwater. This is quite understandable since most people feel out-of-breath and aren’t getting enough oxygen when swimming. However, there’s actually more to this than oxygen deprivation.

So by exhaling continuously underwater, you release the accumulated carbon dioxide which in turn reduces your need to gasp for more air. Needless to say, when you don’t have to worry about gasping for your next breath, you’ll be able to perform your stroke better and more efficiently.

One common mistake among many beginning swimmers is that they tend to lift their heads to breathe. There are several reasons why they do so. For one, they are afraid of taking on a mouth full of water when they keep their head low when they breathe. Second, they think that if they keep their head low, they won’t get a good breath in and run out of air as they swim. That said, many swimmers tend to lift their head and up look up to the sky as they breathe, which then causes them to over-rotate.

Thus, you need to train yourself to keep your head low when breathing to ensure that you carry your momentum. This allows you to sustain your pace with less effort and maintain your speed for longer. It also helps prevent your swimming headphones from falling off since there is minimal head movement.

5. Use a Neutral Head Position 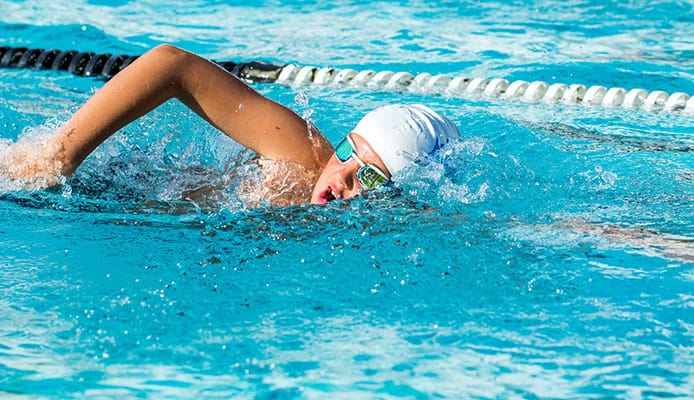 If you look at professional swimmers, you’ll see that they use a neutral head position whenever they do the front crawl. This is opposed to other casual swimmers who tend to look forward or towards the direction they’re heading. The problem here is that it causes the legs and hips to drop. As a consequence, swimmers need to kick harder to keep their legs up, which then causes them to fatigue more quickly and run out of breath faster. Also, keeping your face up and looking forward when doing the freestyle can strain your neck over the long run.

That said, it is important to keep your head in line with the rest of your body as you swim and look directly toward the bottom of the pool as you go.

Many self-taught beginning swimmers often windmill their arms the first time that they try to learn how to do the freestyle stroke. However, this habit of pulling too soon and leaving their arms moving exactly opposite of each other like a windmill should be corrected as soon as possible. Not only is this very inefficient, but it can also lead to serious injuries to the shoulders.

To remedy this, swimming coaches will make their students do the catch-up drill. This helps with the timing of the stroke and breath, which are usually both incorrectly timed with windmill swimmers. The catch-up drill can also be done as a one-arm-only drill where the swimmer keeps one arm stationary in a streamline and uses only the other to swim across the pool. If you feel like you’re not moving at all while doing a one-arm-only drill you can use swimming gloves to add resistance and allow you to propel yourself forward.

7. Don’t Push Water to the Side

Some swimmers who haven’t had any formal training tend to internally rotate their arms to push the water to the side instead of pulling it back. If you look at their hand movement underwater, you will see their arms flaring to sides as though they’re pushing the water away from their bodies or outwards. If you’re looking to improve your freestyle, this is one mistake that you should avoid.

When doing the front crawl, your fingertips should enter reaching straight ahead in streamline with the palm facing down. Also, the fingers should point directly to the bottom of the pool as your elbow bends in the catch and pull phases of the stroke. Imagine pulling yourself to move in front of the water rather than pushing the water behind you.

Another mistake that many beginners often make is kicking too wide and opening their legs like a pair of scissors during the kick which then creates a lot of drag. This mistake is often performed alongside another mistake which is windmilling, which then results in their bodies becoming off-balance further resulting in incorrect positioning and timing of the stroke.

Obviously, the quickest fix to this dilemma is to simply avoid windmilling your arms and keeping your legs closer as you kick. Altering your arm speed as it enters and exits the water (accelerating your arm into the water and back and then using a slower movement in the recovery phase) also helps.

This is one mistake that even seasoned swimmers tend to make. This doesn’t mean though that it is an acceptable practice since pulling the arm into recovery too early will cause even good swimmers to miss out on a lot of power during the push phase of the stroke. One way to deal with this problem is to count your strokes across the pool and attempt to decrease the number while increasing your distance per stroke.

A high elbow position allows you to keep a vertical forearm for a longer time so practice using a high elbow position while pulling backward with your arm in the water. The technique consists of bending your elbow and bringing your forearm in a vertical position as soon as possible during the underwater arm stroke phase. To keep your forearm vertical, you need to keep the bent elbow as high as possible for as long as possible during the active pull phase. By keeping your forearm vertical, you increase your grip on the water and, as a consequence, improve propulsion.

Freestyle appears to be the easiest swimming stroke to master. However, there are many factors to consider if you are planning to improve your front crawl. So keep the freestyle swimming tips above in mind and use the correct drills to allow muscle memory to move the body naturally in the proper position. It won’t be easy but with consistency and practice, you should be able to improve your freestyle swimming techniques and stroke over time. 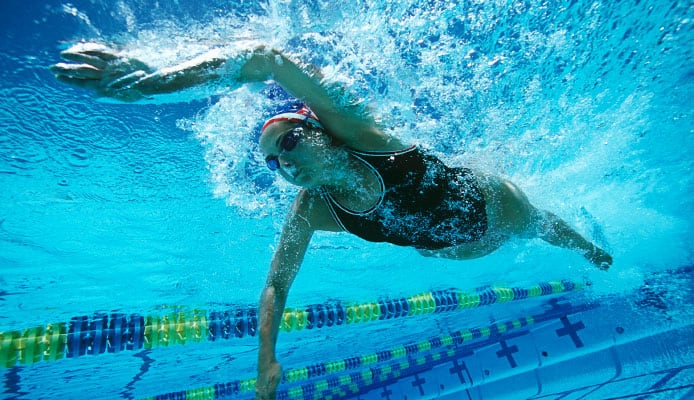 How To Lose Weight With Swimming 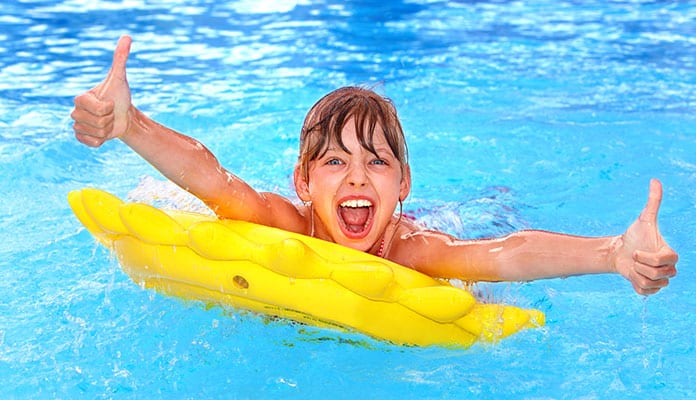 Learn How To Swim: A Beginners Guide 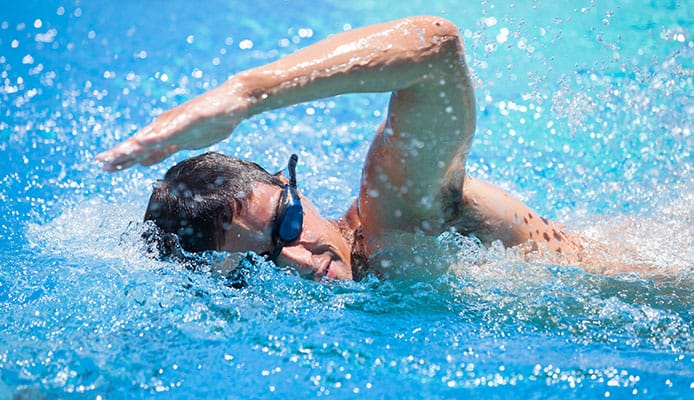 Beginners Guide On How To Breath While Swimming