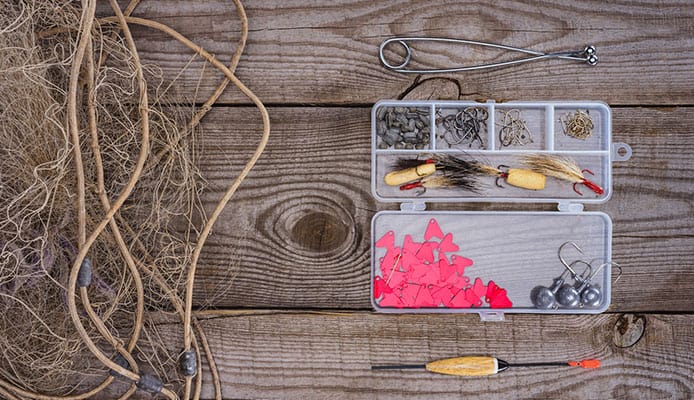 Buying a new fishing hook may seem like a straightforward process, or at least that’s how many new anglers often see it. After all, you’re shopping for a fish hook, a piece of fishing equipment that even non-anglers know fairly well. But they soon find out that this isn’t always the case. As soon as they step into the shop, they are greeted by rows and shelves of varying fishing hook types, designs, and sizes. And although having a variety of choices to choose from may seem like a good idea, it also breeds confusion for the uninitiated angler.

One of the things that confuse many people when it comes to fishing hooks is their size, and although the shop may have a large hook size chart hanging on the wall, it doesn’t seem to help the confused angler that much. After all, fish hook sizes aren’t labeled in the same way as many other fishing gear and items are. For example, you won’t find hooks labeled as “Small” or “Medium” or “Large”. You also won’t find hooks in ranked alphabetical order with “A” being the smallest and “Z” being the largest. Oh, yes fish hooks do have a numerical ranking, but even this can sometimes be confusing (a #20 is smaller than a #1, but a #1 is smaller than a 20/0).

So to help clear up some of the confusion regarding this topic, we have here a guide about fish hook sizes, including thickness and gauges, and others. We also threw in some tips about how to choose the right size of fish hook for your particular fishing activity. But before we get to that, let’s first take a look at the basic anatomy of a fish hook. This is somewhat important since some of these parts will influence the size of the fish hook.

Anatomy of a Fish Hook

Regardless of design and type, most fish hooks will have the following parts:

In general, fishing hooks are categorized by “sizes” and “aughts” as indicated by numbers and symbols. For many beginning anglers though, these numbers and symbols can be rather confusing. However, this system of classifying fish hook sizes is actually pretty simple, and even non-anglers should be able to understand how it works.

A Closer Look at “Sizes”

What you need to remember when choosing or buying fish hooks classified under “sizes” is that the higher the number, the smaller the hook. For instance, if you look in a hook size chart, you will see that a #10 hook is much smaller than a #1 hook.

A Closer Look at “Aughts”

With “sizes” the hook size grows bigger as the number dwindles, but the opposite is true for fish hooks under the “aughts” measurement system. That is, the higher the number, the bigger the hook will be. For instance, a 1/0 fish hook will be smaller than a 10/0 fish hook.

If you look at a regular hook size chart, you will see that fish hooks classified under “sizes” are smaller than those under “aughts”. For example, a #15 hook will be very, very small compared to a 15/0 hook. To illustrate, a #15 fish hook is used mainly when fishing for bluegills and other minute or small fish species. On the other hand, 15/0 is so large that it is used by fishermen targeting large marlins, swordfish, or tuna.

While many fish hook manufacturers adhere to this basic sizing and numbering system to indicate the increase or decrease in the size of their hooks, there are still quite a few who don’t. This is where all the confusion comes in. You may experience buying what you thought to be a #5 hook from one manufacturer, but then you see that it is smaller (or bigger as the case may be) than the #5 hook you bought earlier from another manufacturer. Thus, it is highly recommended that you do your research first before putting your money down for a fish hook. You can go online and look at the manufacturer’s fish hook size chart to see the specifications of the hook you intend to buy.

Fish hooks are generally made from wires of varying thicknesses or wire “gauges” which refer to the diameter of the hook wire. They can be made from very thin wires to thick wires and are classified as “Fine Wire”, “Heavy Wire”, “2X Heavy”, “3X Heavy” and so on.

Needless to say, the thinner wires are lighter and are easier to hide, and the thicker the wire becomes, the more visible it is to the fish. Although it may seem then that the thinner wires are the better option, thick wire gauges are also necessary especially when catching larger fish species since they can resist bending or straightening when imbedded in the fish’ mouth. That said, the choice of wire gauge will generally depend on the type or size of the fish you’re after. If you’re targeting large fish that require a lot of dragging or using maximum force to pull the fish out of the water, you’ll definitely want to use thicker fish hooks, even if they’re much more visible (and often less attractive) to the fish.

There are also fish hooks that are marked with “2X Strong” or “3X Strong” (not to be confused with “2X Heavy” 3X Heavy”). The “2X” mark means that the hook is made from the wire as thick as the next size up while a “3X” hook is as thick as a hook two sizes up.

Well, the idea behind these extra strength hooks is to allow anglers to use smaller but stronger hooks. These hooks are generally used for fishing scenarios where a stronger hook is required, but the angler wants to use a smaller hook to make it less visible to the fish. These smaller yet stronger fish hooks are also often necessary when using lures, where using a bigger hook would kill the action of the lure and make it less attractive to fish.

An advantage of using fish hooks with longer shanks is that it provides more space between the hook point and your line. Sometimes, anglers fishing for toothy fish species experience having their lines cut off as large-mouthed fish takes the bait and accidentally swallows the whole hook, along with the line tied at the hook’s eye. By putting more distance between the hook point and the eye, it is less likely for the fish to bite through (and consequently cut off) the line. It is also easier to remove long shank hooks with or without the use of fishing pliers.

So should you be using fishing hooks with longer than usual shanks all the time? Not so. See, the longer the shank, the more visible it is to the fish.

A less common but important fish hook size consideration would be the gape size. A “Wide Gape” hook is one where the gape or the distance between the hook point and the shank is wider than a ‘normal’ hook of the same size. These are marked as “2X Wide” which means that the gape is twice as large as a ‘normal’ hook of the same size. Some manufacturers though use a different system, where a “2X Wide” would mean that the gape size is the same as the next hook size up (e.g. a “2X wide” 1/0 hook would have the same gape size as a standard 2/0 hook).

Again, there is very little standardization for this and manufacturers will have different definitions and design considerations in this area. Thus, consult the manufacturer’s website for more information to avoid buying the wrong size.

Now that we’ve cleared much of the confusion regarding fish hook sizes, let’s take a look at the importance of using the right size of hook for fishing.

As can be gleaned from the above paragraphs, there are both pros and cons to the various sizes, wire gauges, and shank lengths of fishing hooks. For instance, a bigger and thicker hook is stronger than a smaller and thinner one; however, it is also more visible to the fish, which can spook them away and leave you empty-handed. A longer shank is also better to prevent toothy critters from cutting off your line, but again its size makes it easier for the fish to spot and avoid.

So how then do you go about choosing the right size of hook for your fishing adventure?

Naturally, the first thing you’ll want to consider is the type of fish you’re targeting. If you’re going after trophy-sized fish or angling for a marlin or a swordfish then you’ll want a fish hook that is large enough to match the power and aggressiveness of this fish. Otherwise, if you’re simply taking your kid out on a trip fishing for bluegills, then you’ll want to bring along smaller hooks in your tackle box.

Think of Your Bait

Bigger Is Not Always Better

As was mentioned in the earlier parts of this article, a bigger or thicker or longer fish hook isn’t always ideal since it is more visible to the fish. However, there are other reasons why you’ll want to avoid using larger fish hooks unless necessary.

For one, it doesn’t necessarily mean that a bigger hook will stay in better in the fish mouth. Many anglers tried using a larger than necessary fish hook while angling, only to find that their potential catch has swum away. What happens in such situations is that the mouth of the fish is too soft, and when the battle between man and fish became too wild, the hook literally ripped the fish’s mouth, leaving the fish with a torn lip and the angler with nothing. This is a terrible scenario more for the fish than the angler, as the wound may become infected or the fish may have difficulty eating, both of which can lead to its demise.

Use the Smallest Hook Possible

One of the most common mistakes that many people who are just getting started with fishing commit is using a fish hook that is too big for their needs. This kind of mindset is propelled by the idea that to hook a big fish, you need to have a big hook. That is somewhat true in many cases since landing a humongous fish will require a large hook that won’t straighten out during the battle. However, many anglers know by experience that this isn’t always the case. Some anglers can land a large pound trout using a fish hook that’s smaller than what other anglers usually use.

That said, always try for the smallest hook that you can get away with. This will make sure that you can conceal your hook as much as possible, which then increases the chances of the fish taking your bait. It is also good to use a small hook that is thicker and stronger. This way, not only is it less visible to the fish but you also don’t have to worry about your hook straightening out while fighting with the fish.

Fish hooks are available in a range of sizes, each of which is designed to catch anything from a tiny sunfish to a gargantuan marlin. Despite being one of the most basic pieces of fishing equipment, many people still find themselves confused when it comes to choosing the right size of the fish hook to use. If you identify yourself as belonging to this group, we hope that the factors and pointers above have helped make the process easier for you. So take some time to familiarize yourself with the different fishing hook types and sizes by looking at and studying a hook size chart or by talking to a seasoned angler. By doing so, you are more likely to end up with the right hook size that will make your fishing trip more successful. 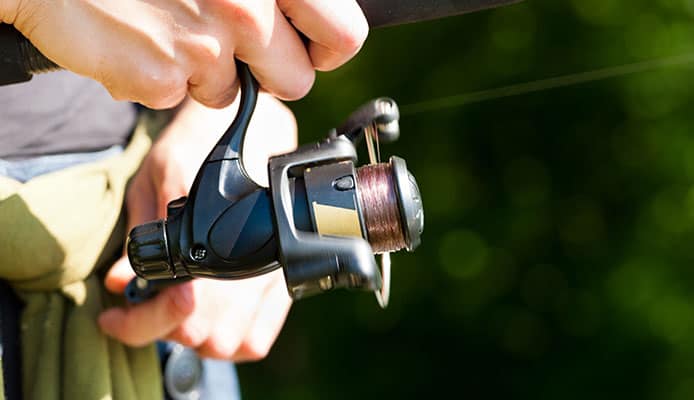 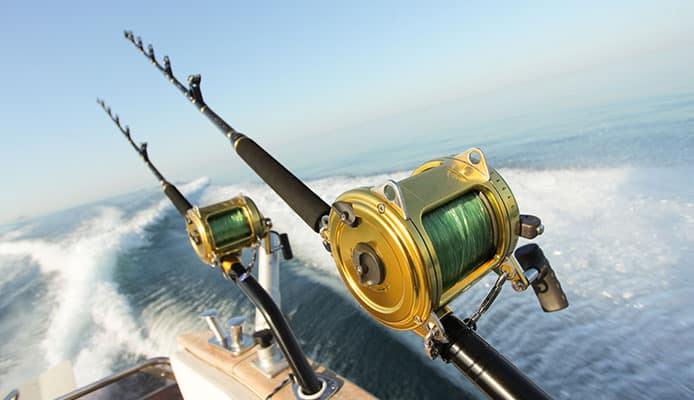 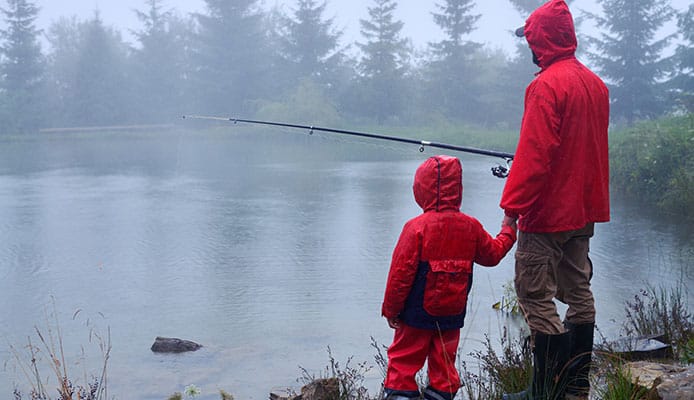