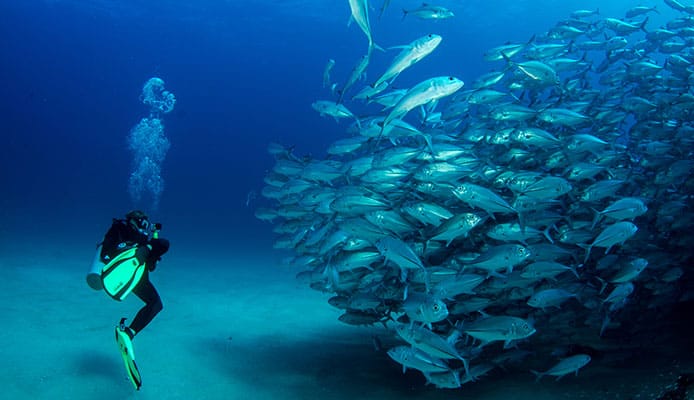 Whenever you hear the word “biodiversity”, the first thing that should pop inside of your mind is Costa Rica. This small country located in Central America as stated by the Costa Rican embassy accounts for only 0.03 percent of the earth’s surface with the only 51.100km2, but it also has almost 6 percent of the world’s biodiversity. This also includes marine wildlife and ecosystems, which makes Costa Rica one of the best locations for any imaginable form of diving.

Located on the Southern Caribbean coast, this place is known as one of the favorite places for both diving and snorkeling. It has many amazing little bays, islands, inlets, and the coral reef. Combined with many marine wildlife species like sea turtles, dolphins, and crocodiles, among the others, it offers an amazing atmosphere and the chance to fully enjoy nature. On the sea bottom you’ll meet many bright colored fish species, so make sure your waterproof camera is ready. The best time to visit this humid tropical rainforest is during spring (March and April) and autumn (September and October).

If you’re into snorkeling more than scuba diving, Cahuita national park should be one of the underlined places in your planner. It is located on Southern Caribbean Coast and it is known as one of the largest living coral reefs. You’ll get the chance to see more than 35 species of coral. It is recommended to visit this park during September or October because these two are considered drier months. Also, you should check out when their local festival will be held, and try not to miss it if your schedule allows you. And make sure you have all the snorkel gear ready.

As a bonus, if you find the right guide, you’ll see many different animal species like monkeys, sloths, iguanas, snakes… Quite an amazing place to fully enjoy nature and let your entire body senses wild in the rhythm of reggae.

This biological reserve is part of the Cano Island national park, which is protected as a part of the Osa Conservation Area. There are multiple ways to enjoy this location – you could spend your time whale watching while not diving, but what’s the most exciting about this place is its marine life and coral beds.

The sea creatures you could run into are manta rays, dolphins, false killer whales, whales, sea turtles, not to mention an amazing number of fish species and even manatees. It is regarded as the second most popular place for diving in Costa Rica, so it is not a surprise that almost everything on this island is centered on scuba diving and snorkeling. The water is crystal clear, so you’ll be seeing dolphins and sea turtles even from the surface. As you draw near, you’ll spot many beautifully colored coral reefs and rock formations that make it perfect for the sea creatures, so it will be an amazing activity both visually and emotionally.

While at Cano Island, don’t miss the chance to check out one of the top Costa Rican diving spots called El Bajo del Diablo – “Devil’s Rock”. Located about a mile away from the shore, these rock formations reach the ocean’s bottom so there are many really amazing underwater caves. The depth is from 20 to 80 feet, and some of the marine life species you could see there are giant manta rays, Mobula rays, even bull sharks, nurse sharks, and in some cases and if the time is right, whale shark, along with lots of colorful, smaller tropical fish that roam around the formation. 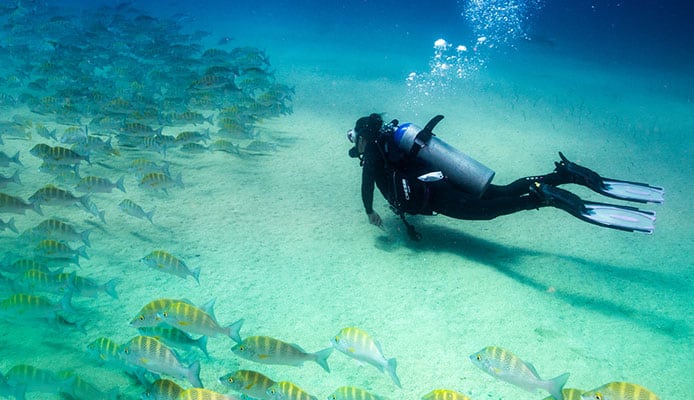 With the name itself is “The Shark cave”, this diving site located near Cano Island is another one you shouldn’t miss the chance to visit. Deep around 50 feet, it is accessible for both experienced and inexperienced divers. It is the home for white tip sharks, so you’ll be able to see them lurking from the cave’s entrance. Entering the cave is forbidden for both your own and the shark’s safety, but the view is still amazing. Also, this guide on scuba diving with sharks can be helpful.

The cave is enriched with rock formations and hard coral where you’ll see tropical and colorful fish, sea turtles, and possibly even large rays. Sometimes, if the sun rays are falling to the corals at the right angle, you’ll see another amazing thing in coral reflections.

Accessible from the shore, this is one of the shallowest diving sites that will leave you literary breathless. It starts at 15 and doesn’t go under the depth of 40 feet, and it is rich with remarkable coral reefs and lots of different fish species, so much you’ll think you’ve gone somewhere out of this world. This scuba diving site will allow you to hang out with damselfish, the parrotfish, the butterflyfish, the porcupine fish, and the special delight is the chance to run into the octopus.

The Coral gardens dive site is located on the Southside of Similan Island number 1. If you prefer snorkeling, the fact that there are many amazing coral reefs filled with marine life makes this site quite an amazing place for this activity. The ideal months to dive in the Coral gardens are October and November.

Properly named “Paradise”, this about 65-foot deep dive site represents just that – a place similar to a fish paradise. Made out of volcanic lava, this rock formation is another diving jewel of Cano Island. With dozens of thousands of blue and gold snappers that move in groups, swimming through them feels like moving through some kind of living maze or a tunnel. You’ll also see barracudas circling the groups of horse-eye jacks and waiting for the chance to grab a meal. It can be quite dramatic, so take your time to fully enjoy this amazing moment that represents the circle of life.

The Marenco Rock dive site is not filled with rainbow-like colors, but another one of the places located near the Cano Island will offer you the chance to dive up to 60 feet and see the black corals, with grunts, snappers, and lobsters moving around in the search for their lunch. Also, this dive site serves as the home for plankton, so there will be many different fish species visiting for a lunch.

You’ve probably guessed – another place located on the Osa Peninsula, near Cano Island, allows you to check something really amazing and unique. This location is great for snorkeling and it has amazing wildlife both on the land and in the sea. If you’re lucky enough, you’ll see the spinner dolphins’ show because this place is the home for these amazing and playful creatures. If you don’t want to go deep but prefer to stay near the shore, you’ll be thrilled to know that this area has more species than you’ll be able to see in one dive, so you’d probably love to come back as soon as possible.

While in the province of Guanacaste, take your time to visit the Papagayo Peninsula and the Gulf of Papagayo. This location has more than 400 wildlife species roaming around, with orcas being the most impressive ones. The name itself means “The Gulf of the parrot”, and it represents one of the major tourism projects in Costa Rica. Some of the most popular places are Ocotal beach, Playas del Coco, Playa Panama… But don’t be disappointed – even with its rising popularity, the Gulf of Papagayo has remained clean and kept its spirit, so this one should be on the top of your diving list, especially if you’re more into snorkeling.

The reason why Cocos Island is not included in the top 10 places listed above is that this is a category of its own. It has an amazing coral reef, volcanic tunnels, lots of caves, and the waters around Cocos Island are home to more than 30 coral species, 60 crustaceans species, 600 mollusks species, and over 300 fish species like yellowfin tuna, giant mantas, scalloped hammerhead shark, whale shark… Add many different whale species like the humpback, orcas, pilot whales, sea lions, bottlenose dolphins, turtles… Cocos Island was on a shortlist to become one of the modern 7 world wonders, but it didn’t cut. Yet, it is one of the Costa Rican wonders, so if you have the chance, visit it.

When Is The Best Time To Dive in Costa Rica

The simplest answer is – all the time! The air temperature rarely goes under 70 degrees Fahrenheit. Most of the time the temperature varies between 71°F (22°C) and 92°F (33°C), so basically it is possible and good to dive any time of the year. The weather in Costa Rica is divided into two seasons – the dry season that goes from December to April and the wet season that starts in May and lasts until the end of November.

Which Season Is Better For Diving?

Although possible all year long, there is a common opinion among the divers about which season is better for diving in Costa Rica, and it may surprise you – it’s the wet season. Don’t be alarmed, that doesn’t mean it will be raining all the time; the mornings are most often sunny while the rain comes in the afternoon. The reason this season is better is that more fish species are roaming freely, unlike the tourists who prefer the dry season, so there won’t be so many people, you’ll have more space and the price of the accommodation will be lower.

If You’re A Beginner Take A Dive Course

In Costa Rica there are many diving centers and schools that offer open water diving certification, drift diving training, and cavern training, so don’t worry if you’re a scuba diving beginner or a snorkeling beginner.

As we’ve already stated, it is possible to go diving in Costa Rica all year long. Most of the time, the temperature of the water is very warm, between 26 and 29°C (78-84°F). This may fall to 19°C (68°F) from December through March because of the cooler currents, but it has its own perks. With cooler currents come migratory species, so you’ll be able to see pilot whales, manta rays, whale sharks, among many other fish species. All you need to fully enjoy it is a wetsuit, a diving hood, and you could also check this ultimate scuba diving checklist.

Remember, there are many different fish species and animals you could meet during your trip and diving, so there may be some scuba diving dangers and risks. Because of this, it is recommended to get travel insurance for scuba diving. Visit your local insurance company and check the prices. It is important to have insurance in case you need medical care. It will make your life way easier.

Also, when you get there, check for any signs, specific rules, limitations, or anything similar, and stick to it. If the lifeguard or anyone with the authority orders you to do something or not to do something, follow that order or you may get yourself in trouble. Follow the scuba diving etiquette and you should be alright. And don’t miss to learn the basic scuba diving signals.

If you think about going somewhere to scuba dive or snorkel, choosing Costa Rica may be your best decision. Many different fish species, coral reefs and flora, and fauna overall make it an outstanding place for this kind of activity. And the best part – you’ll enjoy it no matter how experienced you are. If you’re a beginner, there is not a better place to learn how to dive. And if you have many hours underwater in your biography, the rich marine life will give you the chance to feel something new and amazing. 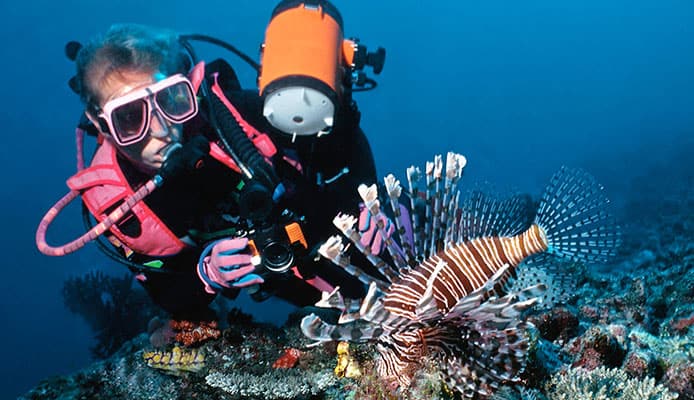 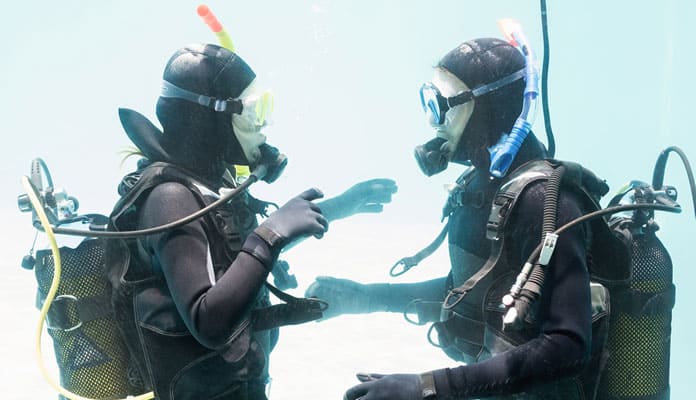