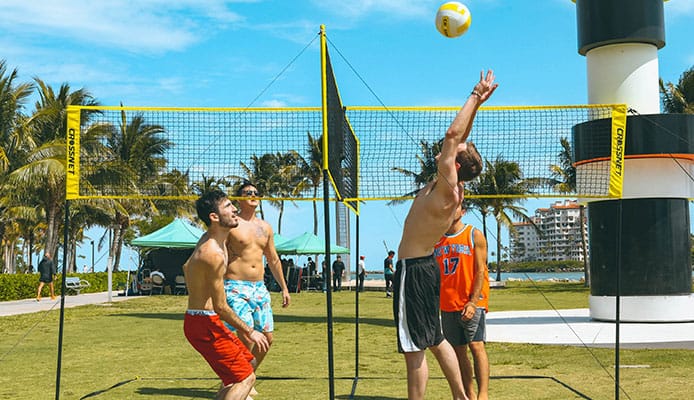 When you go to the beach there are the tried and trusted games which everyone will play, but they can get quite boring after a while. Not only that, but some beaches can get quite crowded and don’t offer you a lot of space to play your sports, which can be frustrating.

Crossnet is a new game that is gaining popularity that solves both of those issues. Not only is it a highly fun game but it doesn’t take up too much space when you are out there on a beach, which means that you’ll always be able to play it.

The game is quite simple and everyone will be up to speed fairly quickly. You can either laugh with it or get more serious if you wanted to. However you play, Crossnet is going to be a star attraction when you are at the beach. 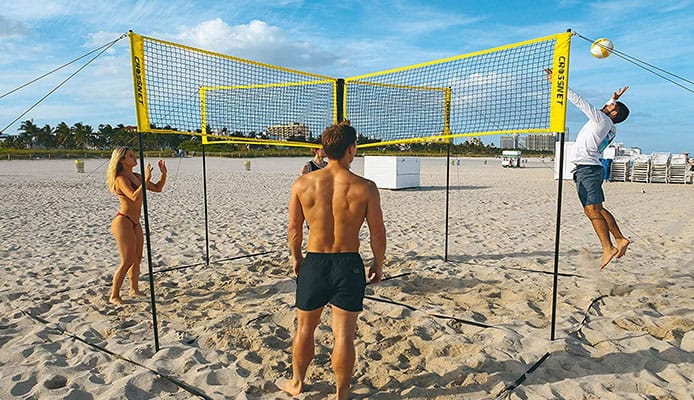 The game is generally seen as a mixture between the school game of four square and the traditional game of volleyball. While four square is played by bouncing the ball on the floor, Crossnet is played by using the same principle but with a volleyball over a net instead.

Hitting it up in the air and over a net is the only real link to volleyball that the game has, and is more closely follows the rules of four square. It is a huge amount of fun which always attracts the interest of other beachgoers who are curious about the new game and want to see the fun everyone is having.

It’s an individual game that can be played by anyone of any ability or age. It’s highly portable but also versatile too as the Crossnet could be easily transformed for those who wanted to switch it up by playing more traditional volleyball games.

The Crossnet set comes with everything that you need to start your game. It has a patented set of rules which will help you get started straight away. It sets you up for a lot of fun and a great time, especially with the features that it has.

How Do You Play?

While the game is seen as an adaptation of four square, the actual rules of four square seem to vary slightly from one person to the next. Crossnet on the other hand has a specific set of rules that are clear and easily followed.

The 4 squares in the Crossnet rules are ranked from 1 to 4 as they increase in importance. These squares are referred to in many ways in four square but for simplicity, Crossnet just numbers them, with square 4 being the dominant square.

Only the person in square 4 can score points and the first to 11 points is the winner. Depending on how good you are this could either be a consecutive set of 11 points that are wiped out if you make an error or a tally of 11 points that are retained if a player goes back to square 1, or the back of the queue.

Points are scored when any player other than the square 4 player makes a mistake, by either hitting it out of bounds or missing it. If the box 4 player makes an error then they have to leave the 4th square and everyone else will rotate around.

While the game can only be played by any 4 players at once, as with four square, there can either be just 4 players or any number of players, with the rest waiting in order at square 1. If the square 4 player makes a mistake then he would enter square 1 if there were only 4 players, or the back of the line if there were more.

Every restart is done by the square 4 player hitting the ball directly across to the square 2 player who can then play it to anyone. As the aim for players 1, 2, and 3 is to not make a mistake but to force a mistake from square 4, it would make sense that the other 3 players would direct their play to square 4.

Other minor rules are that you’re allowed to spike the ball, except on the return of the serve. You can only reach over the net if it’s in the follow-through of an attacking move. You can only have one touch of your hands per move, but other body parts can be used aside from that. And if the serve hits the net then player 4 has once repeat attempt, unless the first attempt went out of bounds and they are out.

This is the type of game where if you forget some of these rules, it’s no big deal as long as everyone agrees but they are not too hard to grasp. The intention is to have fun and keep the game moving along to give everyone a turn. 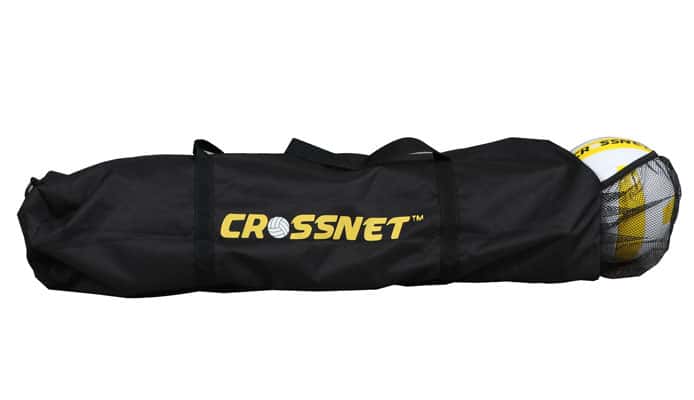 The Crossnet set contains all the equipment that you are going to need to get started. Along with the net, there are 12 spring fastener poles, 4 tension springs, 12 ground pegs and there are two lines for the inner boundary of the square and one for the outer boundary.

On top of that, you get the Crossnet volleyball included as well as a pump too. All of this is included in an easy to use carry case. The construction of the net is simple and after you have done it a few times, it should only take a few minutes.

Q: Can you play other games?

A: Absolutely, the net can be adjusted for a traditional game of short court volleyball and it can also be amended for a three-way skills game.

Q: How many can play?

A: Only 4 people can be in the squares at once but an unlimited amount of players can line up next to square one.

Q: How long does the game take?

A: This is dependent on your skillset and the number of players. If you are doing accumulative scoring and have four players, it can be very fast-paced.

Q: How long does it take to set up?

A: Once you are comfortable with the process, setting up the game should take between 5 – 10 minutes.

This a brilliant game which is a huge amount of fun. Any number of players can play and enjoy a great experience when you are out there on the beach. The rules are quite simple and easy to follow, and won’t leave anyone confused about what is going on.

The equipment that it comes with is high-quality and won’t break easily. The installation is fairly simple and you’ll be able to start your new game in no time at all. Four square has long been a highly popular game and Crossnet has been able to take that fun to the beach.

If you are looking for a new game and new ways to enjoy yourself at the beach then this is going to be a perfect choice. Not only will all your friends and family getting involved but you will soon have curious passers-buy who probably wished that they had a Crossnet. 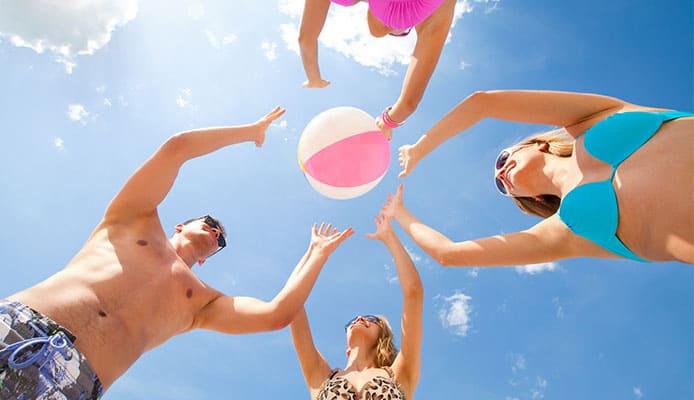 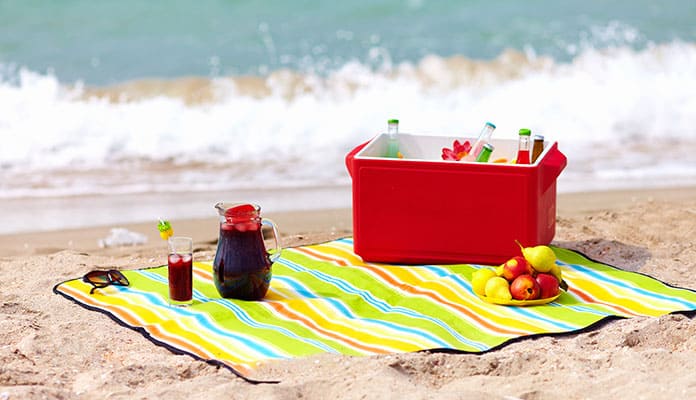 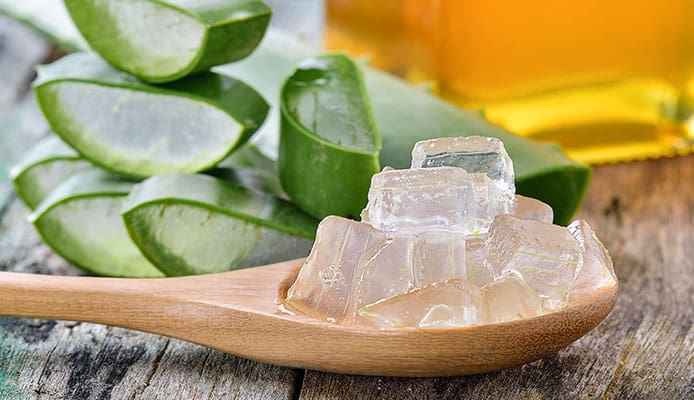