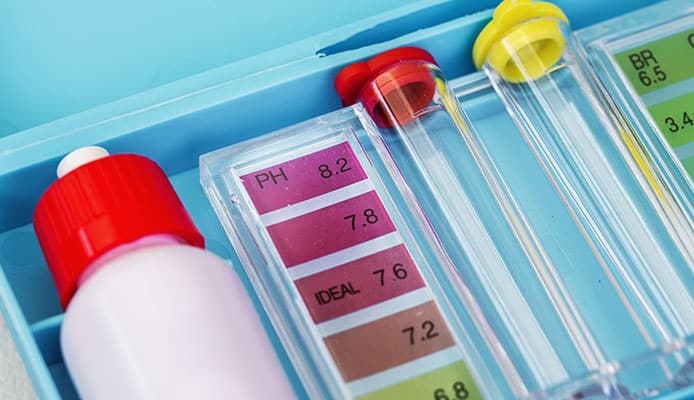 Over the years, hot tub owners have developed their own biases towards two of the most popular hot tub sanitizers: chlorine and bromine. Some would go on to say that chlorine is the better choice between the two while others would say the opposite. For the first-time hot tub owner who is on the prowl for the best hot tub sanitizer to use, reading through the differing opinions regarding chlorine vs. bromine and all the pertinent details regarding these hot tub sanitizers can quickly become overwhelming. That said, we have here a brief overview of the differences between these two hot tub sanitizers along with their pros and cons so that you can make a more informed decision when choosing which one to use for your hot tub.

Chlorine is sold in local pool and hot tub supplies stores in tablet, granule, stick, and liquid forms. Regardless of which form you choose, the most important thing to remember is that you should only buy chlorine that is suitable for hot tubs and avoid those that are used for swimming pools. This is mainly because chlorine made for swimming pools tend to have higher acidic levels and calcium content.

For instance, hot tub owners should avoid using Trichlor since it is highly acidic and will cause bleaching on the hot tub’s surface and eventually damage its finish. The use of Calcium hypochlorite should also be avoided since it can leave a significant amount of calcium deposits on the hot tub and its components.

That said, hot tub owners are advised to limit their choices to sodium-dichlor granules or a plug-in salt system.

Compared to the other two types of chlorine mentioned above, sodium-dichlor is much less acidic and works better in hot water. In fact, it is specifically designed for hot tub use, unlike Trichlor and Calcium hypochlorite. Just remember to first dissolve it in water before adding it to the hot tub.

On the other hand, a self-feeding salt system makes use of salt crystals which produces chlorine. There are quite a handful of advantages of using this water sanitation system, which is why many people tend to convert regular hot tubs into saltwater hot tubs.

Bromine for hot tubs are typically sold in tablet and capsule-shaped briquettes and are introduced to the water through a bromine feeder or floater. It should be noted that bromine tablets contain significant amounts of chlorine and belong to the same family and function pretty much in the same way. However, despite the presence of chlorine, bromine is the predominant sanitizer.

Many hot tub owners tend to think that between chlorine and bromine, the former is a much more potent (and consequently a much better) sanitizer than the latter. Such conclusions are generally arrived upon mainly because of the observation that chlorine has a quicker or more immediate reaction to the active organisms in the water. For example, when there is an alarmingly high presence of algae in the hot tub, the addition of a concentrated dose of chlorine often results in the organisms’ rapid demise. This reaction is largely due to the higher percentage of available sanitizer in chlorine.

Unlike chlorine, bromine takes a longer time to begin the disinfection process after it is fed into the water. However, once bromine has successfully been saturated in the water, it becomes a very strong bacteria killer.

That said, chlorine has an advantage of killing algae more rapidly than bromine, while bromine has a big advantage over chlorine in killing bacteria and viruses. Bromine can also be an effective algaecide, particularly against mustard algae and black algae. Sodium bromide can be an effective algaecide, though it will need to be used in conjunction with an oxidizer which is typically chlorine. 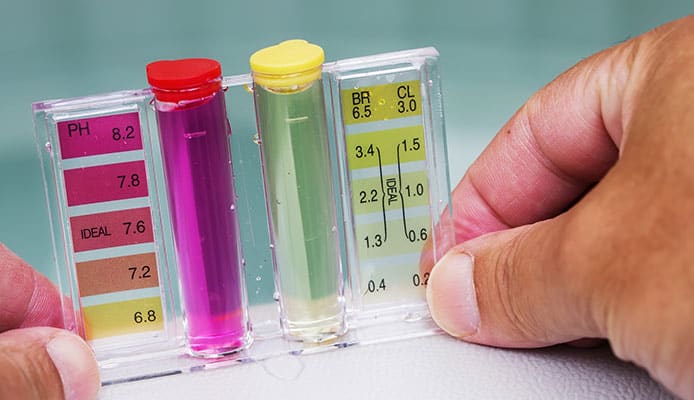 Simply put, staying power refers to the hot tub sanitizer’s ability to remain active after it has been introduced into the water. Both chlorine and bromine have god staying power depending on the circumstances in which they are used.

For example, both chlorine and bromine can gas off or dissipate when constantly exposed to the ultraviolet rays of the sun. However, chlorine can be protected against this by the addition of a stabilizer, thus allowing it to stay in the water for longer. Bromine sanitizers cannot be protected in the same way, which then leaves hot tub owners with the assumption that chlorine has better-staying power. But then again, most hot tubs have hot tub covers that protect the water (and consequently the bromine in it) from the sun and its ultraviolet rays and thus preventing it from gassing off.

Compared to bromine, chlorine has a high oxidation process. This means that after the chlorine has done its job of disinfecting the water, the chlorine molecules become inert or inactive. As such, it becomes rather ineffective. It has also been found that these unproductive chlorine molecules are one of the contributors to that strong chlorine smell that emanates from the water, as well as to the itching and redness of the skin and eyes of the bathers.

Unlike chlorine though, bromine does not become inert after it completes the disinfection process. After the active bromine has eliminated the unwanted organisms in the hot tub, it leaves behind dormant bromine salt. These bromide salts can be reactivated by adding a small amount of chlorine shock. And when reactivated, bromine becomes an active sanitizer again. That said, bromine can be considered as having more staying power since it can remain active for a longer period of time due to its ability to be reactivated. And since it doesn’t remain dormant for long, it doesn’t contribute in any way to the strong odor or causes itchiness and redness in the skin and the eyes.

Hot tub owners know that pH levels in hot tubs can fluctuate from time to time, and these fluctuations can affect the effectiveness of chlorine and bromine as hot tub sanitizers.

Many experts agree that chlorine works best in water that has a pH range of 7.4-7.8. If the pH level goes lower or higher than the recommended range, the effectiveness of chlorine starts to falter and decrease drastically, making it substantially less effective in killing bacteria. For instance, at a high pH, say 7.8, only about 25% of chlorine is active. That said, chlorine is less efficient in hot tubs with fluctuating pH levels.

On the other hand, bromine is less exposed to these pH fluctuations and is capable of working in a wider range of pH levels like 7.0-8.4. Bromine is not affected by pH swings as much and continues to be effective, even in a full hot tub where pH levels can often rise quickly.

Still, regardless of whether you choose to use chlorine or bromine in your hot tub, you must regularly check and balance your hot tub’s pH levels.

But about hot tubs where water temperatures are much higher than in swimming pools, bromine becomes the better choice. Unlike chlorine, bromine can remain stable in such temperatures and is thus able to continue sanitizing the water whereas chlorine would have already lost its effectiveness as a water sanitizer.

There is a marked difference between the price of chlorine and bromine. If you visit a pool and hot tub supplies store, you will see that the former is much more affordable than the latter. However, aside from the amount you need to pay upfront, there are also other things that you need to consider when determining the cost-effectiveness of each hot tub sanitizer.

For instance, it was mentioned earlier that chlorine isn’t as good as bromine as a hot tub sanitizer because it loses effectiveness in high water temperature. Also, bromine can be reactivated whereas chlorine cannot. So even if you pay less upfront when you purchase chlorine, you will end up spending more since you constantly need to frequently add more chlorine in the water to keep it sanitized.

All in all, while chlorine may save you some money upfront, bromine seems to present itself to be a more cost-effective option down the road. However, if the budget really is an issue, then chlorine would be a better choice.

So, after making all those comparisons, which between chlorine vs. bromine is the best hot tub sanitizer? Unfortunately, there is no clear-cut answer to this question. Both chlorine and bromine are effective hot tub sanitizers in their own rights. Thus, to determine which one you should use, you’ll have to consider what works better in your particular situation, how much use the hot tub gets, your understanding of hot tub water chemistry, and how much you are willing to spend. At the end of the day, it doesn’t matter if you prefer chlorine over bromine tablets or vice versa. What matters is that you choose the best hot tub sanitizer that allows you to keep your hot tub safe and enjoyable for yourself, your family, and your friends. 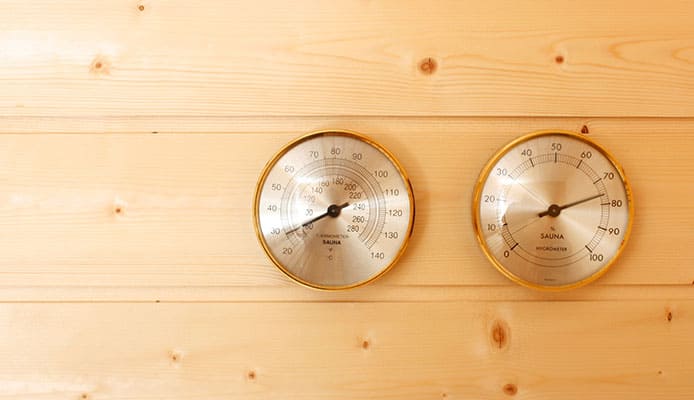 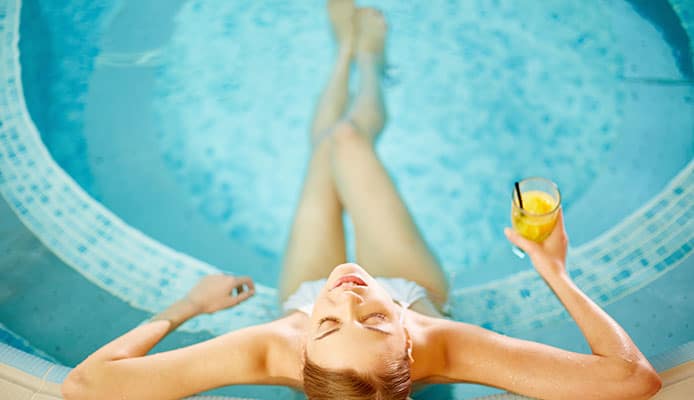 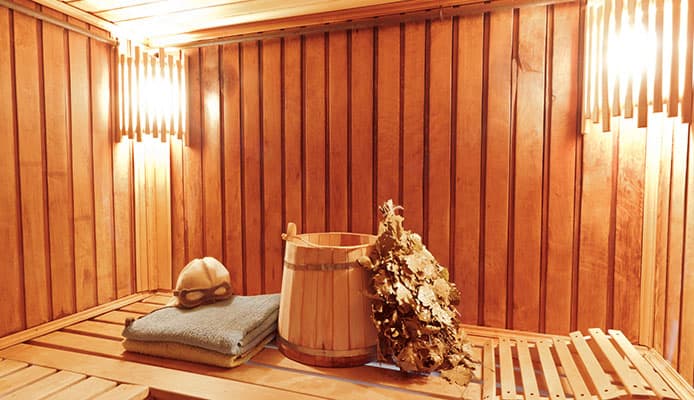